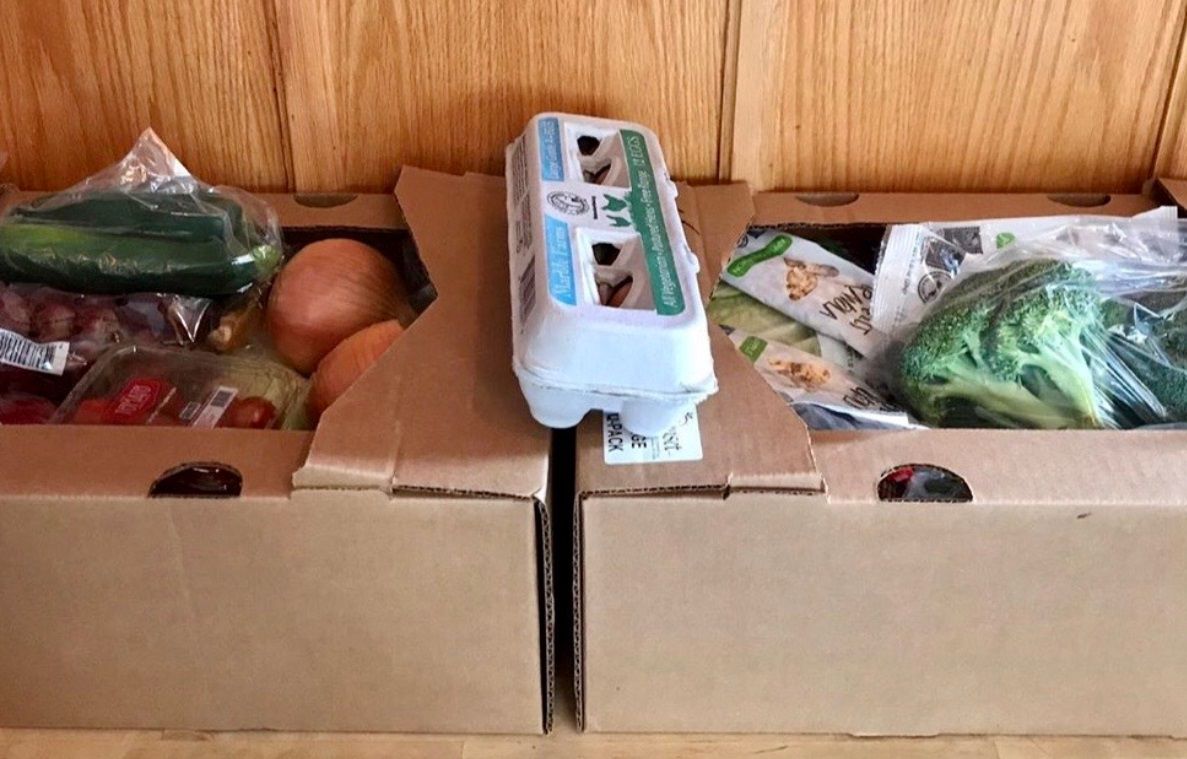 The two boxes of produce and more from Sunset Fruits & Vegetables and Produce Peddlers, sent from 19 Ideas to its employees for food during the pandemic. (Photo courtesy of Jon Tashjian of 19 Ideas) 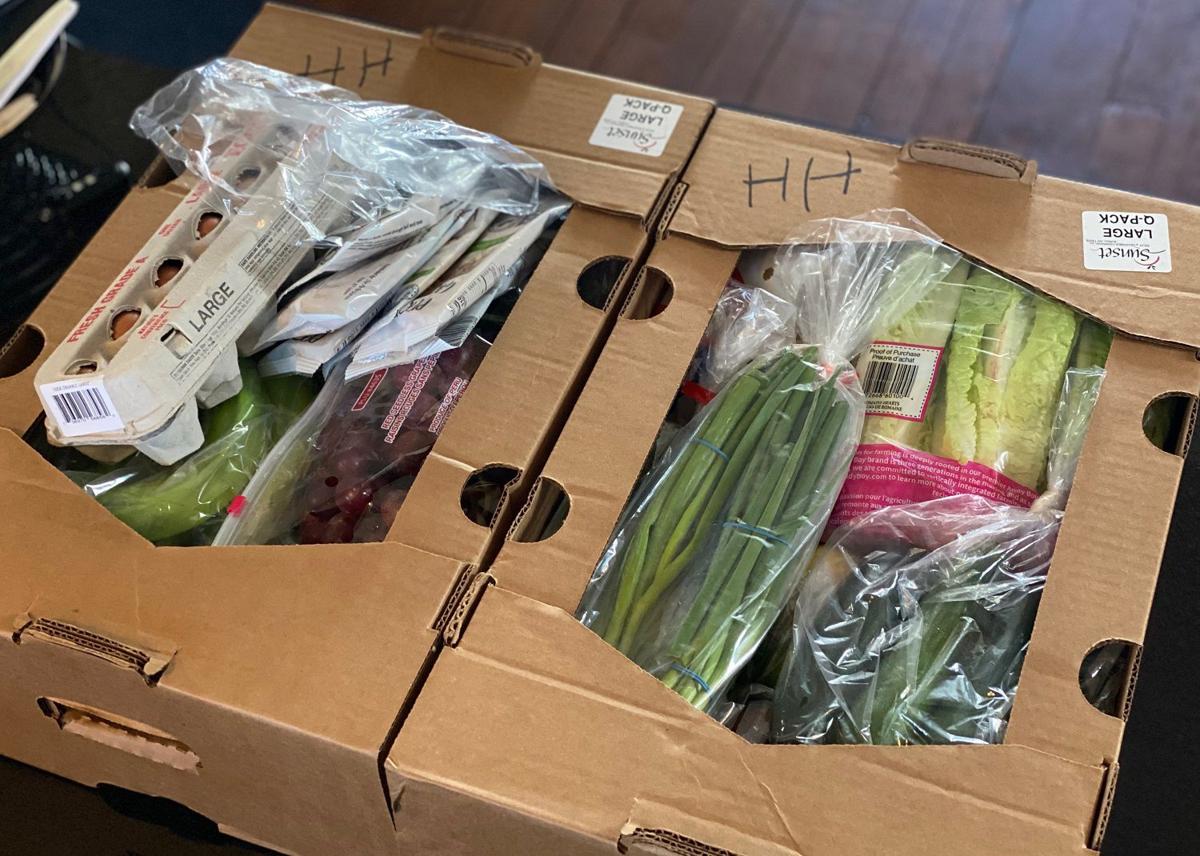 The large Q Pack from Sunset Fruits and Vegetables, ordered and delivered by the 19 Ideas owners. (Sam Scarcello) 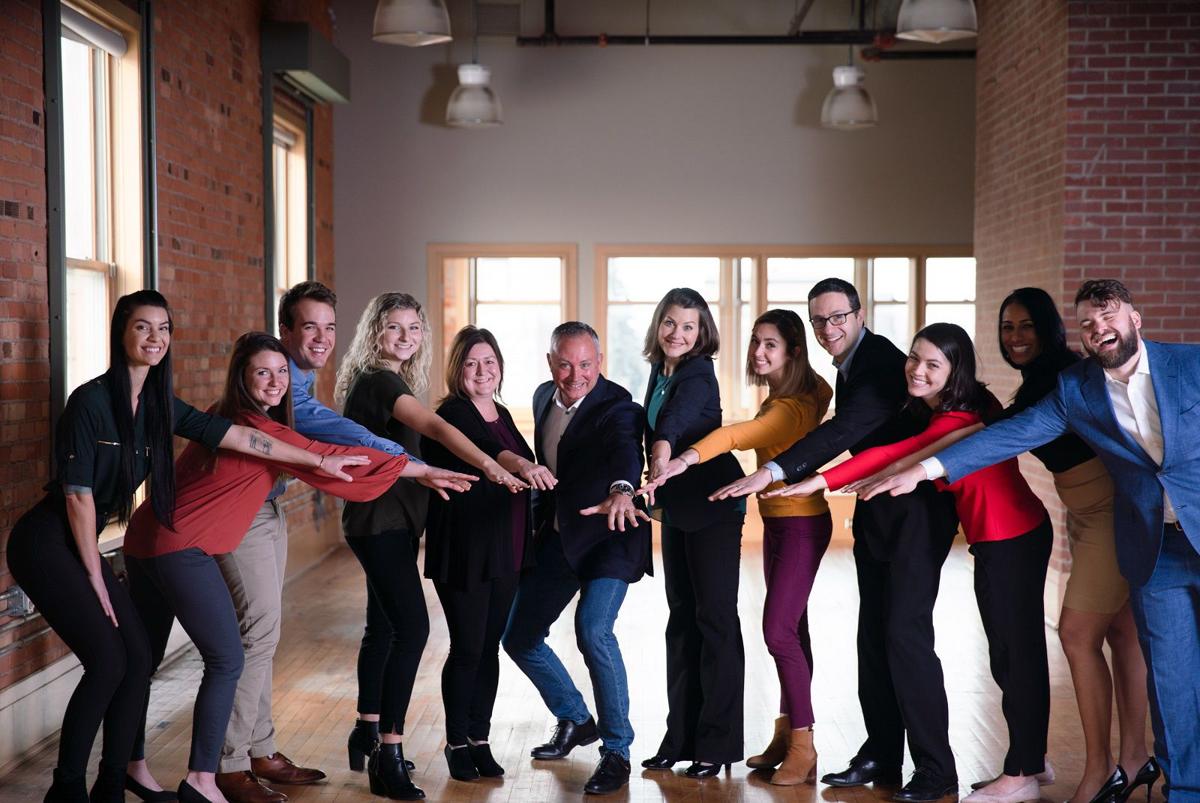 Milestone Consulting's team photo, before social distancing was put into effect. (via Milestone) 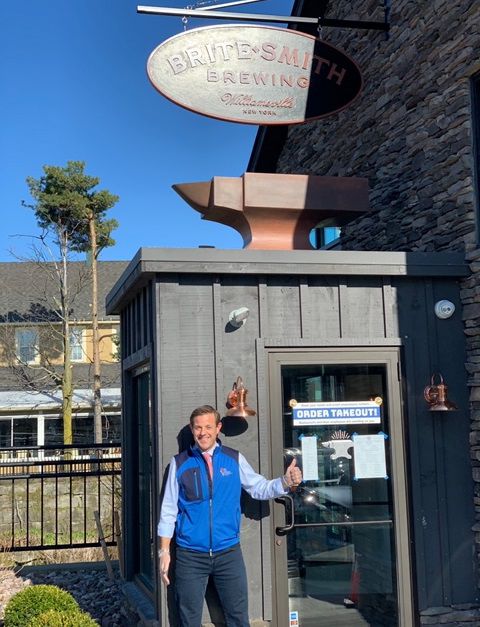 Katie Krawczyk was worried about her 20 employees, even as though she was fortunate not to have to lay anyone off. The co-owner of 19 Ideas, a Buffalo design/development/marketing/PR agency, knew each worker was equipped to carry on remotely, but her concern ran deeper.

"Not knowing what was around the corner, keeping people safe [was our goal]," said Krawczyk, who runs the agency with her husband, Dan Gigante. "We didn't want [any employees] making unnecessary trips to the grocery store."

Krawczyk and Gigante sought healthy food that could sustain 20 employees for more than just a day or two. Their eventual decision was both cost-effective and a boon for two organizations that support local farms: Sunset Fruit & Vegetable, a produce distributor on Bailey Avenue, and Produce Peddlers, a Goodell Street marketplace and delivery service.

The 19 Ideas partners delivered Sunset's large Q Packs (cucumbers, romaine lettuce, two different types of potatoes and much more) and granola and eggs from Produce Peddlers to their employees' porches on March 20, and now have scheduled similar drop-offs for each month the pandemic lasts.

Krawczyk's beyond-expected compassion is an inspiring trend modeled by several other employers in the area. Many shared their stories.

John Bair knew his financial planning company had the resources to make a positive impact on a hurting community that needed a jolt of optimism, but he wanted his employees – a tight-knit group of 10 based near Shea's – to feel the benefit, too.

Milestone Consulting's team, which helps guide clients receiving lawsuit settlements, could work remotely, even if courts were closed and travel was discouraged. But the group missed its well-honed camaraderie, which would often be sharpened outside the office at restaurants and bars.

"We love Buffalo and love going out," Bair said, "and restaurants small and large are just dying."

To try to pump money into the food industry, Bair doled out $500 to each of his employees under the condition the money be spent on takeout or delivery from local eateries, with a tip of 25-30% encouraged.

The firm's workforce – which includes an expectant mother, a single mother and two first-time fathers – has embraced the restaurant stimulus, supporting between 30 and 40 businesses, ranging from West Seneca to the Elmwood Village to North Buffalo and beyond.

In addition, Bair ordered a surprise pizza delivery to each of his employees' houses on a Friday afternoon, which patronized pizzerias such as Bob & John's La Hacienda, Casa di Pizza, La Nova and a few others.

On another occasion, Bair dropped off a bottle of pinot noir for each employee. He's also given his team a day off to take care of their mental health, a practice common at several of the companies interviewed.

"Not everybody is good at being in their house all day long, and many of them are fearful for parents and grandparents," Bair said. "There was a sense of stress from Day One, obviously, but after a concerted three weeks people were a little burnt out."

La Verdad employee Kali Conti grew up in Lovejoy and is one of the neighborhood restaurant's only full-timers. Because of the Covid-19 pandemic, her mother was laid off at the Ford plant, erasing a chief source of income for Conti, her mother and her three younger siblings. Given the fragile state of restaurants, the family couldn't be sure that it could rely on Kali's job, either.

But Kali's employer – a community-focused barbecue restaurant run by Vivian and Al Robinson, two pastors from nearby Spirit of Truth Urban Ministry – eagerly filled in the gaps.

Vivian provided the Contis with a fully stocked medicine cabinet, ranging from allergy medicine for Kali's mother and drugs to treat illnesses; plus toilet paper and generous amounts of food to bring home that La Verdad didn't sell each day.

"[Vivian] is more than generous for everything she has done," Conti said. "She helps keep us healthy and safe during this time with the virus and even brings some of her love back to our home with her food."

Also, Robinson has started a fundraiser to benefit her two employees, added Conti, who won't be eligible for unemployment due to the length of their tenure at La Verdad.

No, tax season wasn't officially over, and work duties had shifted to helping small business clients understand new government loans, but the leaders of Brock, Schechter & Polakoff CPAs didn't want to skip over the usual end-of-season party that's been a reward and company highlight every April.

With roughly 70 employees who were usually based in the Larkin Exchange Building now working remotely, supplying each with happy hour beverages for a virtual meetup seemed impossible. But director of human resources Caroline Organ had an idea.

With help from managing partner Ray Crane and the rest of the firm's leadership, Organ organized a virtual happy hour that entrusted Fattey Beer Co.'s robust delivery system to assemble roughly 60 customized orders of the beer store's Survival Packs (the other 10 employees opted against drinking).

Because Fattey had to shutter both taprooms due to state restrictions, owner Nik Fattey quickly adapted with a digitally based delivery model. Several bulk deals, from "Fill Your Fridge" to "Beer It Forward," have been popular.

For the BS&P happy hour, employees could choose from eight or nine Survival Pack options focused on beer but even extending to White Claws, Organ said, and have them delivered to each employee in time for the virtual gathering on GoToMeeting April 16.

There was an element of surprise, too, as the team learned of the collaboration with Fattey the day before the delivery.

T-shirts that won't forget about you

When Covid-19 struck and T-shirt orders slowed, Positive Approach owners Joe Piehler and Justin Howard were forced to temporarily lay off their four employees at the end of March.

The decision felt like the first step back in some time for the design and printing company that moved into a 6,500-square-foot location in the West Side last year, growing its clients significantly in Buffalo and beyond, and set lofty goals for 2020.

"It was a little disheartening that we had to [give in] to what everyone else was doing," Piehler said, referring to the pandemic-precipitated layoffs. "Everyone's job is secure – and there will be plenty of orders coming through when everything is back up and running."

In the meantime, Piehler and Howard gave the four employees a bonus equivalent to one or two weeks of regular pay, depending on the worker's wages and status (hourly or salary, for example).

The unexpected bonuses were meant to "keep the high spirit" of the company's growth, which includes designing and producing shirts for local restaurants, breweries, gyms and higher ed organizations, as well as emphasize the strength of the relationships between the owners and the employees, Piehler said.

"Stay positive and stay strong, and don't fret on it too much," Piehler said. "You can only control so much."

Applebee's, a restaurant chain that has one franchisee – T.L. Cannon Companies – overseeing all 13 locations in the Buffalo area, has been especially active in caring for its furloughed employees.

While T.L. Cannon received no mandate from the overarching brand for how to care for its workers, vice president of marketing and public relations Stephanie Griffin highlighted two generous moves appreciated by employees, who extend beyond Buffalo to a total of 60 locations throughout upstate New York and into Connecticut.

Every Tuesday since March 31, T.L. Cannon/Applebee's "Team Takeout Tuesday" initiative has provided a four-course meal substantial enough to feed four people to all furloughed workers. These employees may also receive a 50% discount on all orders from the restaurant, any day and as many times a day as they would like.

These were originally brought to our attention by Denise Penner, the sister of Debbie Penner – an employee at the Niagara Falls Boulevard location.

Thanksgiving meal out of a Buffalo Bills Bus

Rupp Baase Pfalzgraf Cunningham LLC, a Buffalo-based law firm in the Liberty Building, previously provided takeout food and drinks from Britesmith Brewing Company to all 80 employees, but bigger plans are in the offing.

The meals will retrieved from Cercone's Buffalo Bills Bus that's parked outside his home.

The transition to merge the two businesses – which will operate under the La Verdad Cafe name – will begin Sept. 26, when 1194 E. Lovejoy St. will cease to be known as Speak Easy.

The two boxes of produce and more from Sunset Fruits & Vegetables and Produce Peddlers, sent from 19 Ideas to its employees for food during the pandemic. (Photo courtesy of Jon Tashjian of 19 Ideas)

The large Q Pack from Sunset Fruits and Vegetables, ordered and delivered by the 19 Ideas owners. (Sam Scarcello)

Milestone Consulting's team photo, before social distancing was put into effect. (via Milestone)