Amherst's infamous "zombie hotel" is about to be brought back to life.

The New York City-based real estate developer that just completed and opened its Auden Buffalo student housing project is now turning its attention to the partially completed hotel building that has sat dormant on Sweet Home Road for more than four years.

But now it's going to become a new luxury apartment building near the University at Buffalo's North Campus, instead of either another hotel or another residential project for college students.

DMG Investments LLC is planning to complete the construction project that was started by a pair of brothers from Ontario, while converting it into 154 high-end apartments instead of guest rooms. The luxury complex will feature a mixture of studio, one-bedroom and two-bedroom units, with what DMG describes as a "full range of elite amenities."

Now dubbed Air Buffalo, it will focus on health and lifestyle, with an oversized indoor pool, private parking, bicycle parking, a residents' lounge, a private garden, a full-time doorman and a fitness facility that will include Peloton bikes, a Mirror interactive smart gym, Tonal machines and Theragun percussive massage therapy tools.

It's also the first in a new line of conventional and high-end housing properties that DMG is launching, alongside its student housing portfolio.

"We wanted to launch this brand and felt like it was a great location for this," said David Timmerman, senior vice president of asset management at DMG. "In working in that market, it’s up and coming, the university community is right there, and we’ve come to like that area and felt this would be a great location for such a residential facility."

The investment company's Amherst Sweethome Rd Property LLC on Thursday completed its $5.7 million purchase of the six-story building shell, which is located at 1265 Sweet Home.

The 2.33-acre property had been owned by Sam and Jas Johal's Sweet Home Hotels of Brampton, Ont., who had originally planned to create a Hyatt Summerfield Suites in 2006 after they bought the land. They were forced to suspend work in 2017 after losing their financing. As a result, the building sat incomplete – with walls, windows and floors on a fenced-in construction lot.

The site had been under contract to DMG for months. With the completed purchase of the 88,395-square-foot structure, DMG now plans to restart work on the $21.3 million project, with a goal of completing and opening the complex in summer 2022. The company already received $3.5 million in tax breaks from the Amherst Industrial Development Agency.

"We are very excited to have closed on the purchase of this fantastic property," DMG CEO Jacky He said in a press release. "It was a natural extension for us after our successful development of Auden Buffalo. We love the community and want to further contribute."

Under plans previously submitted to the Town of Amherst for what was then called Sweet Home Flats, DMG will convert the shell into 130 apartments with luxury finishes, while tacking on a new six-story annex on one side to add another 17,000 square feet of space and 24 units.

DMG launched its new website for the project at the start of the month, and is already getting interest and inquiries, Timmerman said. "The response has been great, even over the past few days," he said.

DMG, whose office is located on Wall Street in Manhattan, was formed in 2013, and is a subsidiary of DoThink Holding Group – one of the largest residential real estate development firms in China, with more than 60 projects covering over 100 million square feet. It focuses on buying, developing and managing real estate, and is centered around student and luxury multi-family housing, including condominiums.

It already sold the first two, but still owns and manages One Park.

But its biggest focus of late has been its Auden Living student-housing portfolio, with communities in Albany, Ithaca, Houston, South Carolina and most recently Buffalo, and two additional projects planned for Albany and Ithaca. The Buffalo project, located at 2915 North Forest Road, is just north of UB. It features 154 student apartments with 481 beds, and opened in August. It's now 85% occupied.

Relaxing in the clubhouse

Ready to move in

Take in a movie

Grills on the patio

$3.5 million in tax breaks OK'd for conversion of 'zombie' Amherst hotel to apartments

A $21.3 million plan to convert an abandoned, unfinished hotel on Sweet Home Road into student apartments will receive an estimated $3.5 million in tax breaks.

The unfinished six-story hotel on Sweet Home Road has been languishing in uncertainty for more than two years, despite an effort by the current owners to restart work in fall 2018.

Work restarts on unfinished 'zombie' hotel near UB in Amherst

Amherst’s zombie hotel is coming back to life. Work recently restarted on a building shell near the University at Buffalo North Campus, where two brothers from Ontario want to open an extended stay hotel. Construction had started and stopped – twice – at the hotel property, most recently earlier this year, leaving an unfinished, six-story building looming over Sweet

If you visit Hotels.com or Orbitz, you can book a room at a Maplewood Suites Extended Stay hotel in Amherst. But if you drive out to 1265 Sweet Home Road you’ll see guests aren’t getting their complimentary waffles and eggs – or anything else – anytime 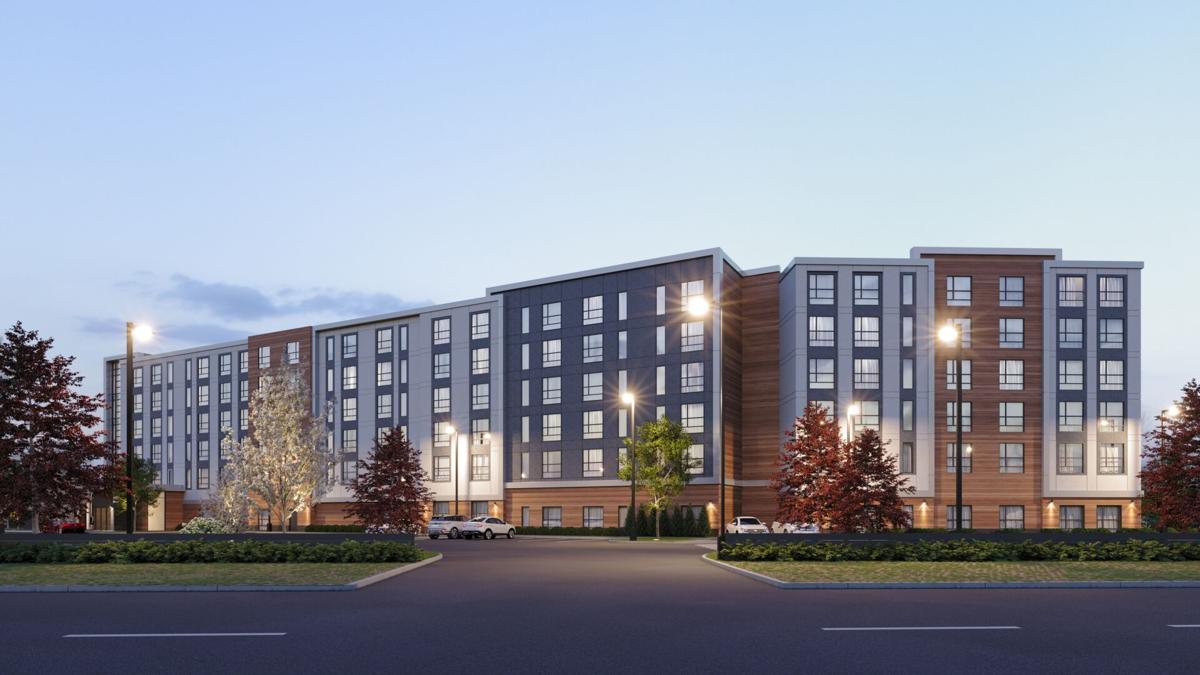 A rendering of the new Air Buffalo on Sweet Home Road, formerly the "zombie hotel."

A rendering of the proposed new multifamily and student housing development at 1265 Sweet Home Road in Amherst, involving the redesign of a dormant hotel project and new construction. (Note: this schematic includes a structure that would be built in a future phase of the project.) 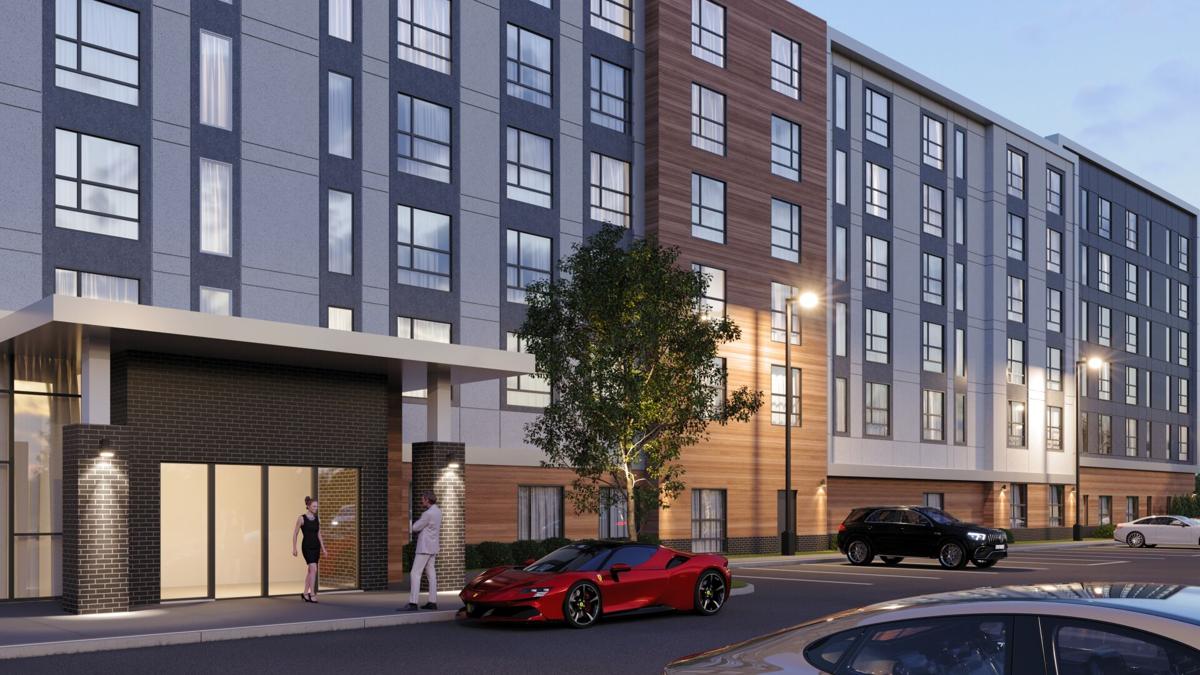 A rendering of the front of Air Buffalo on Sweet Home Road. 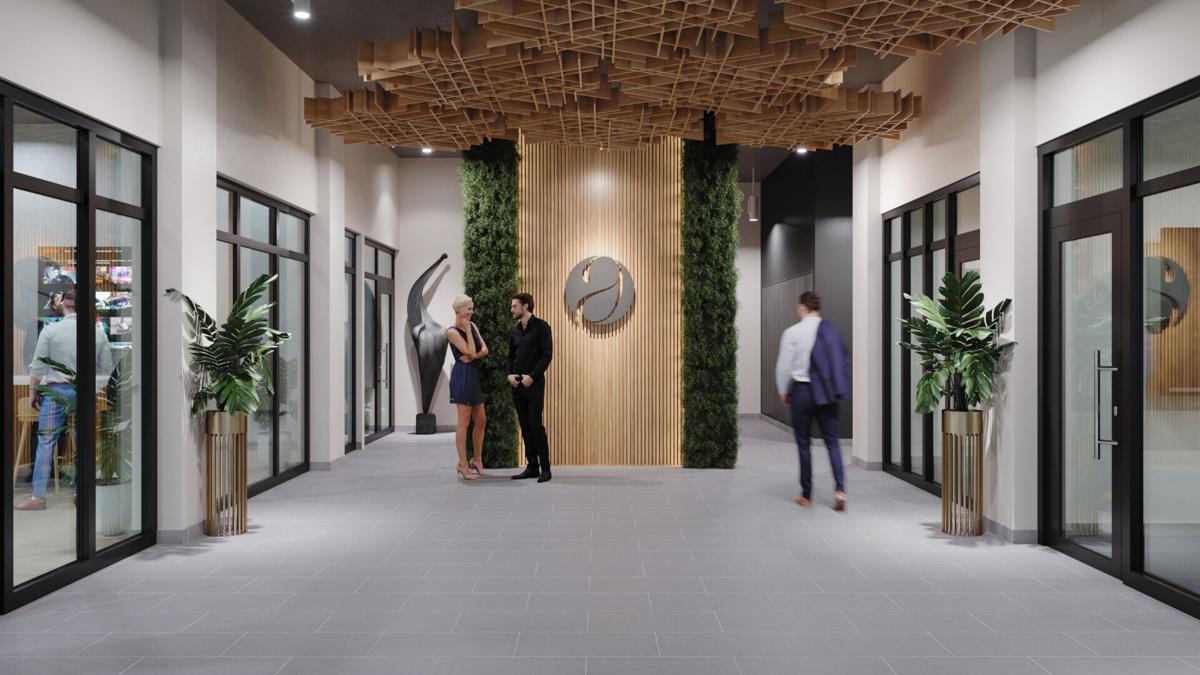 A rendering of the lobby of Air Buffalo on Sweet Home Road. 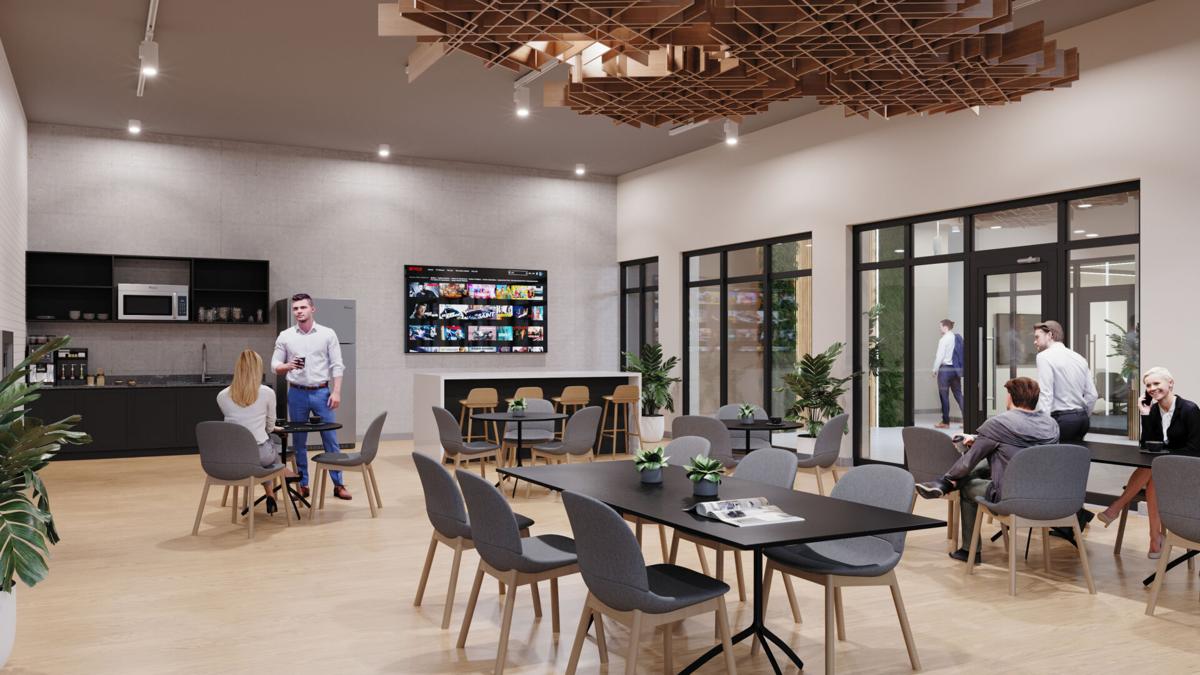 A rendering of what the clubhouse at Air Buffalo on Sweet Home Road will look like. 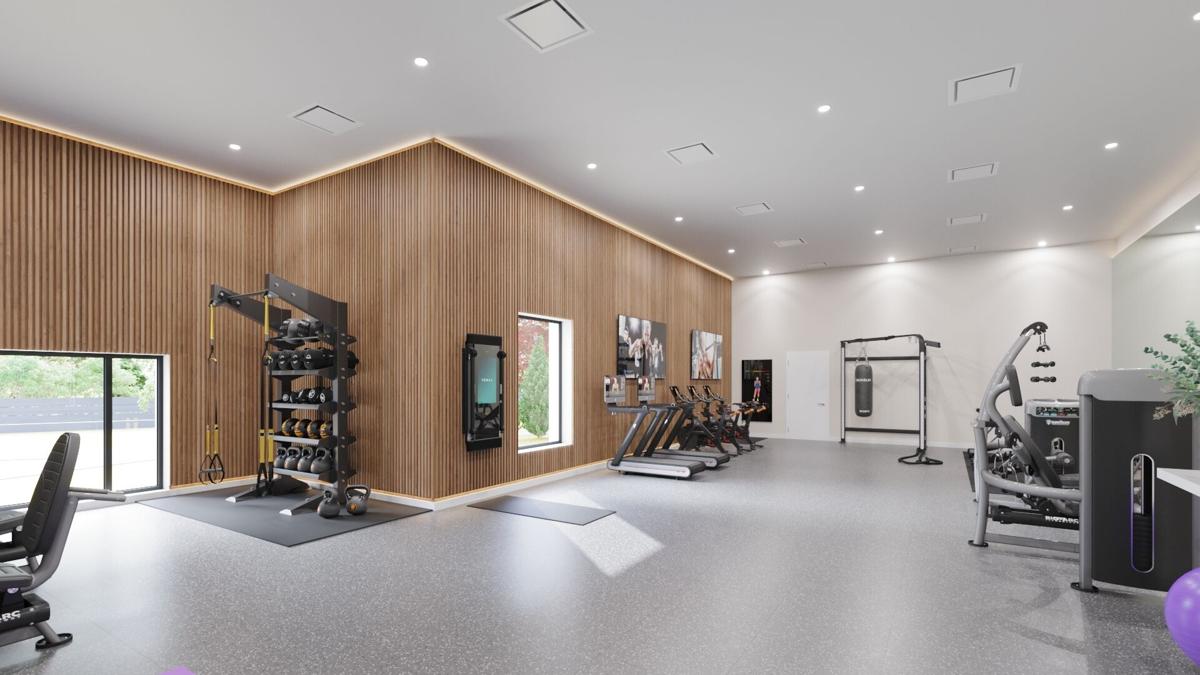 A rendering of the fitness center at Air Buffalo on Sweet Home Road. 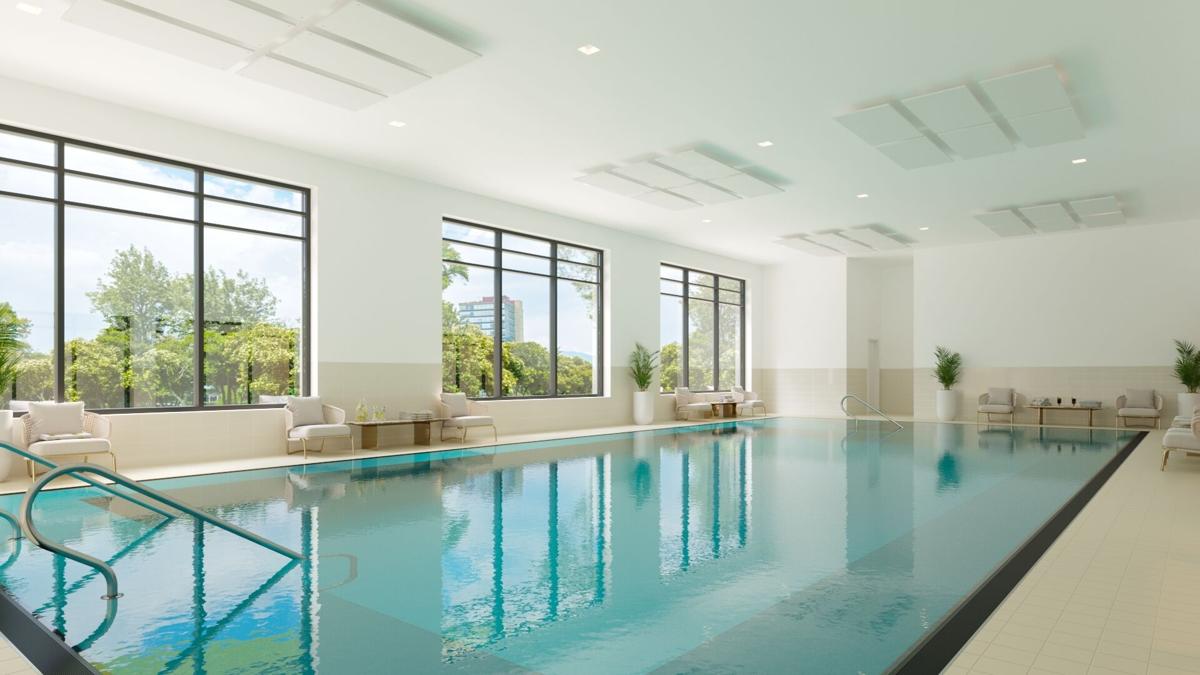 The swimming pool planned for Air Buffalo on Sweet Home Road in Amherst.