Eighteen months after opening just before the Covid-19 pandemic hit, the Jefferson Avenue Apartments complex for seniors and those with disabilities has a waiting list of more than 400 people.

People Inc.'s affordable housing complex in the Masten Park neighborhood shows the demand for more low-cost housing around the city, officials of the nonprofit agency said during a ribbon-cutting ceremony.

"The need for affordable housing continues right here in our region," said Rhonda Frederick, the CEO of People Inc., said during the ceremony, which had been postponed because of the pandemic. "Everyone in this room needs to be a vigilant advocate for the power of what affordable housing can mean to a neighborhood. The Jefferson Avenue Apartments are a shining example of what people working together for the good of all can accomplish."

The complex has 89 units, including some for those needing supportive services.

The $31 million complex – co-developed with Sinatra & Company Real Estate and CSS Construction – features two three-story buildings just north of Masten Park, with 71 one-bedroom and 18 two-bedroom apartments aimed at those earning less than 50%, 60% and 90% of the area median income. Sixteen of the units are reserved for those with intellectual or developmental disabilities, with the nonprofit agency providing services.

"So don't let anyone tell you there is not affordable housing in this city because there is," said Buffalo Mayor Byron W. Brown.

Designed by Long Associates and located at 1140 and 1166 Jefferson, the complex also includes a community room with a small kitchen, on-site laundry, balconies for all apartments, a playground, green space and courtyards and off-street parking. There's also 16,500 square feet of commercial space, including a financial literacy center operated by Northwest Bank and Belmont Resources, new offices for Say Yes Buffalo and a new day care.

The project began in 2016, with construction starting two years later. It was financed with tax credits and $19 million in state funding – from New York State Homes and Community Renewal, Housing Finance Agency, Empire State Development Corp., the Energy Research & Development Agency and the Office for People with Developmental Disabilities – as well as $500,000 in city HOME funds.

"People knew what they wanted to see in this neighborhood, and we delivered it," Frederick said. "Putting all those sources together and building this took an incredible amount of work."

Lt. Gov. Kathy Hochul noted the funding is part of the state's five-year $20 billion commitment to affordable housing – which has already produced 3,200 units in the city – and part of the $65 million invested in economic development on Buffalo's East Side.

"We’re not going to stop until every single neighborhood is lifted up, and that’s what we’re accomplishing here today with this ribbon-cutting," she said. "We're just getting warmed up, because we are realizing that this community has amazing potential."

People Inc., marking its 51st year in operation, serves more than 12,000 seniors and people with disabilities each year, and employs 3,500. Among other recent projects, the agency built affordable senior housing at Linwood and Lafayette avenues and plans a new project in part of the former Women & Children's Hospital of Buffalo.

"You’re doing great projects, and we could not be doing what we’re doing in affordable housing without you," Brown said.

Change is coming to Jefferson Avenue. Nonprofit People Inc. and developers Nick Sinatra and David Pawlik on Wednesday formally kicked off construction on their $31 million project to create affordable and supportive housing on the East Side, with local, state and federal politicians touting the venture as a significant piece of the area’s revitalization. The proposed Jefferson Avenue Apartments

A planned new affordable housing project on Jefferson Avenue is moving forward, after the nonprofit agency sponsoring the project took possession of a dozen properties from the developer who owned them. People Inc. is working with developers Nick Sinatra and David Pawlik on a $31.1 million plan to build two three-story residential buildings with 89 apartments, to be located

People Inc. and a team of developers will start work next week on the construction of an 84-unit, mixed-income apartment project on Jefferson Avenue. The apartments at 1162 Jefferson Ave. will feature two buildings with 66 one-bedroom units and 18 two-bedroom apartments, aimed at families with incomes ranging between 30 percent and 130 percent of the area’s median income.

The developers behind a pair of East Side projects on Jefferson Avenue are inviting residents from the surrounding neighborhoods to a community meeting in late June to discuss the proposed new apartment and medical buildings. The development team – which includes Nick Sinatra and ImmediateCare founder Dr. Greg Daniel, as well as People Inc. and CSS Construction – will seek public input

Two weeks after signalling their readiness to approve a major project on Jefferson Avenue, the Buffalo Planning Board formalized its support Monday for People Inc. and two development partners to construct a pair of new apartment buildings just north of the Johnnie B. Wiley Amateur Athletic Sports Pavilion. The social services nonprofit is working with Nick Sinatra and David Pawlik

A proposed mixed-income apartment complex on Jefferson Avenue won praise from Buffalo Planning Board members Monday night for its design and anticipated impact on an empty two-block section of the East Side thoroughfare. Members signaled their readiness to green-light the $20 million project after brief presentations on plans for the two three-story  buildings at 1140 and 1166 Jefferson, just 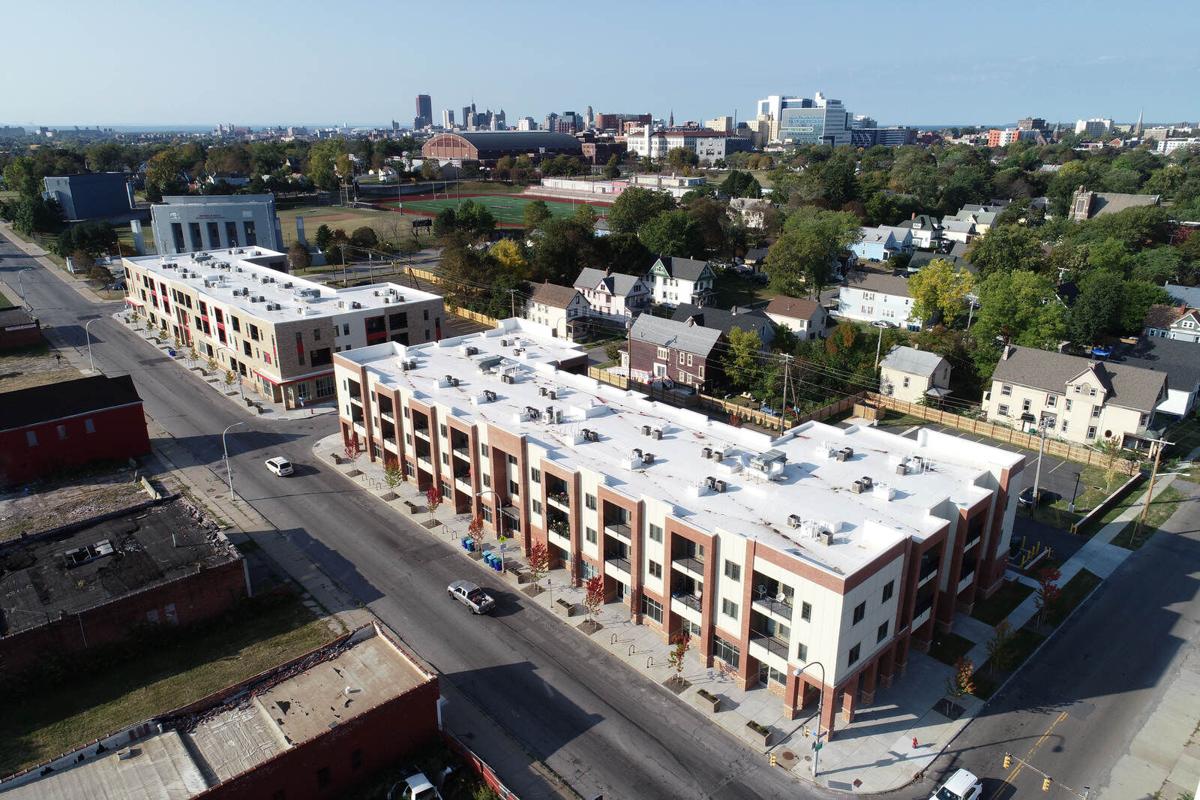 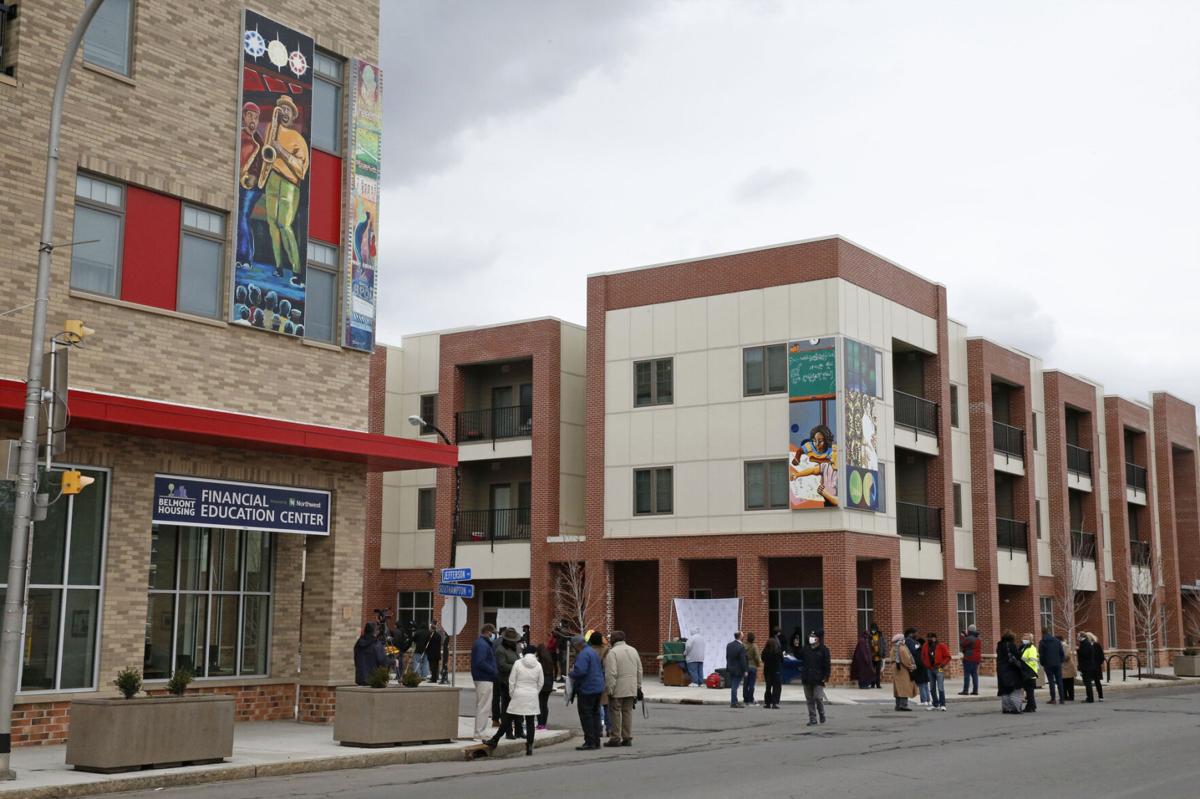 WNY Urban Arts Collective for People Inc. unveiled the new murals that were placed on two exterior corners of the Jefferson Avenue Apartments in the 1100 block of said street. Tuesday, April 20, 2021.