Startup spotlight: 3 early-stage companies you may not have heard of

Investors, founders and employees from well-known startups such as ACV Auctions, Circuit Clinical and PostProcess Technologies took place in panel discussions and networking events. But lesser-known companies just starting out had the opportunity to show off their technology and products, as well.

Here are three local, early-stage startups you may not have heard of before:

When Jacob Godfrey left the Marine Corps, he didn't know what he wanted to do with his life. He worked in kitchens and in construction, struggled with drug addiction and spent time in jail. When he got out of jail, he decided to focus on something he'd always been passionate about: fashion.

In 2019, Godfrey started Tag Tappers, a clothing company that embeds NFC chips into merchandise and accessories. Similar to a QR code, the NFC chips are linked to a website. When a user taps the tag with their smart phone – many of which come with built-in NFC readers – the link pops up on their screen.

Godfrey believes his patent-pending technology can help curb overproduction in the fashion industry.

"We're selling the digital asset first, then the production process of the physical garment happens. That way, we never overproduce our garments," he said. "I feel like if more people start trying to understand NFC's and blockchain, they can understand how if we bring that technology into something that's related to a physical good, we can really start changing utility around the world."

Tag Tappers recently worked with the David Z Foundation, a California-based nonprofit that provides music education to underprivileged kids. Godfrey designed an NFC chip that linked to a donation page for the nonprofit.

Innosek is a Buffalo 3D printing company that takes an engineering approach to additive manufacturing.

The company focuses on partnerships with its customers to design, develop and produce components out of about 30 types of materials, said John Carbaugh, Innosek's business development executive.

Innosek, located on Best Street in Buffalo, has three employees and 50 3D printers. The company is looking to double both of those numbers and move into a larger production space.

The company has more than 200 customers, Carbaugh said. One of the most well-known customers Innosek has worked with is ACV Auctions, Buffalo's online vehicle auction startup.

Innosek helped create a component of ACV's Virtual Lift device, an imaging tool that captures photos of the underside of a vehicle using a smartphone.

Working with ACV was "pivotal" for Innosek, Carbaugh said.

Manaswi Mancha, a junior studying computer science at University at Buffalo, lived in New York City during the height of the Covid-19 pandemic in 2020, when hundreds of people were dying daily in the city.

"In my community of color, a lot of these deaths were due to misinformation," Mancha said. "So, I really wanted to find a way to combat that. A lot of the news is so polarized, nowadays. There's a lack of trust in the news. So, I was thinking, is there a way to use technology, use artificial intelligence to bridge that gap and really find the middle point where Americans can trust the news?"

So, he used his computer science background to create Journo, a platform that uses artificial intelligence to generate news. Journo's algorithms scrape the internet and generate short, AI-generated articles sent out to subscribers in a daily newsletter.

Mancha is targeting the Gen Z and Millennial generations by creating a one-stop shop for news delivered in a quick, easy-to-read format, he said.

Mancha is currently working with a mentor through Launch NY.

• AireXpert aims to get planes fixed and flying again faster

Applications are now open for the Future Innovators and Tech Trailblazers program, aimed at college students interested in kickstarting future careers in technology and entrepreneurship.

Through the program, students participate in professional development activities, such as hackathons, pitch contests and soft skills training. They will also have the opportunity to network within the community, find a mentor and shadow at a local company while learning about Buffalo's rich history and culture.

The program starts in January and is sponsored by TechBuffalo, 43North and Forge Buffalo.

For more information and to apply, visit info.techbuffalo.org/innovators-trailblazers.

Is a long-anticipated redevelopment project at Canalside about to get rolling, finally?

A former Southtowns convent is targeted for a conversion to senior housing.

Nonunion contractors vow to bow out of Bills stadium project. Here's why.

A federal judge has blocked New York's plan to issue the first round of cannabis retail licenses in portions of the state, including Western New York.

A company plans to beef up its battery research and development operations in Sanborn after its owner won a $117 million federal grant.

A new industrial park is in the works for Clarence, with about a dozen buildings and a solar farm.

After years of rapid growth, ACV Auctions has hit a speed bump.

Perry's Ice Cream is planning an $18 million expansion of its Akron facility so it can make Greek yogurt novelties.

1. When Covid hit, it shut down professional sports. It also essentially shut down Delaware North's sports concessions business: No fans meant no one to buy hot dogs and beer. Now, fans are back, and Delaware North's Sportservice business is back, too.

2. 'We've had high caseloads nonstop': There is a critical need for mental health and addiction workers in Western New York, as told by two longtime employees in Warsaw.

3. The Buffalo Niagara housing market is cooling off: But it is not in decline as it is in other parts of the country as mortgage rates rise and the economy slows.

The changes will affect active and retired Teamsters who are covered by the New York State Teamsters Conference Pension and Retirement Fund. That includes about 3,900 retirees from Teamsters locals 264 and 449 in the Buffalo area.

Jemal completed his purchase of the property at 414 Delaware and 124 Edward, paying $3 million to City Inn-Buffalo.

How Mercy Hospital in South Buffalo, the MACC in Orchard Park got through massive snowstorm

Mercy Hospital in South Buffalo and the Mercy Ambulatory Care Center in Orchard Park were among the essential health care operations located in areas that got absolutely hammered by snow in the storm. Keeping them operating wasn't easy.

What's open and when on Thanksgiving and Black Friday

Holiday shopping habits have changed dramatically over the years, and holiday retail hours have fluctuated to match them. This year is no different.

On Sunday, even as the building was due for demolition Monday, Braymiller Lane's owner Howard Braymiller started to feel a little more positive, vowing to rebuild the 80-year-old bowling alley.

Smaller crowds and shorter waits were two of many changes on Black Friday this year.

With the last piece of financing recently lined up after three years of planning, Community Services for Every1 and its development partner, Edgemere Development, have begun work on the transformation of the former St. John Kanty Lyceum building.

A Western New York cancer research company with ties to Roswell Park Comprehensive Cancer Center has been acquired by a San Francisco-based company.

Genesis seeks to shine with own auto showroom in Clarence

Northtown Automotive is seeking approval from the Town of Clarence to build a Genesis showroom along Main Street, near some other luxury auto brands' homes.

Some college athletes are cashing in with licensing deals, but has it really arrived in WNY?

More than a year after the NCAA approved changes to its policies, easing longtime rules to allow college athletes to make money from their name, image and likeness, few athletes at local Division I schools are cashing in yet. 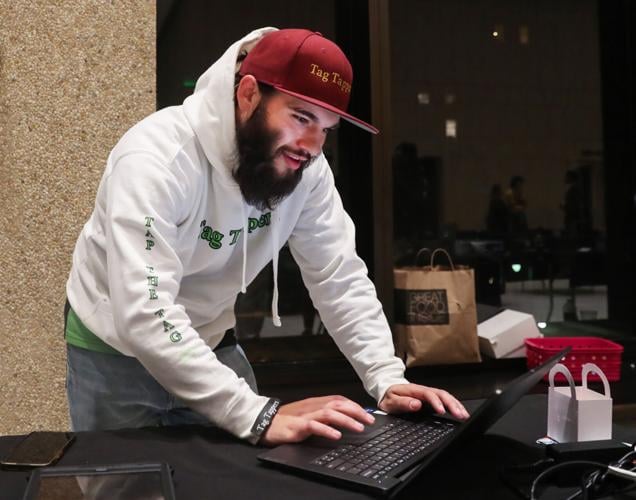 Tag Tappers CEO & founder Jacob Godfrey pulls up information on his computer at the Made in WNY Expo, which is part of Buffalo Startup Week in Buffalo on Nov. 15, 2022. 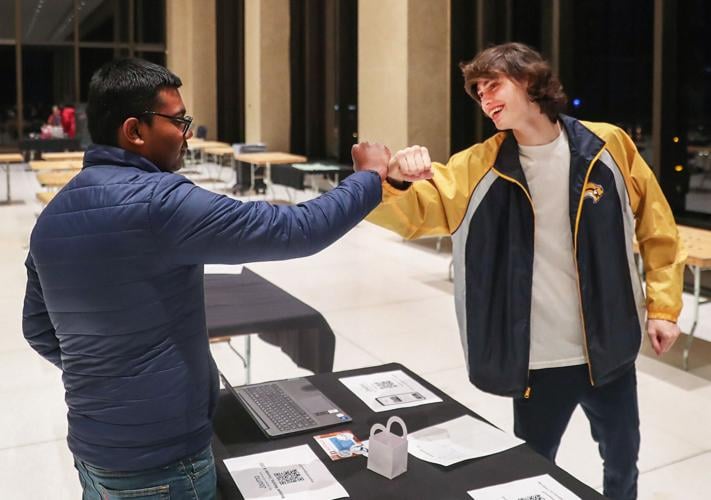 At the end of their conversation, Fresumes CEO & co-founder Matt Morgan fist bumps Journo CEO & founder Manaswi Mancha at the Made in WNY Expo, which is part of Buffalo Startup Week in Buffalo on Nov. 15, 2022.