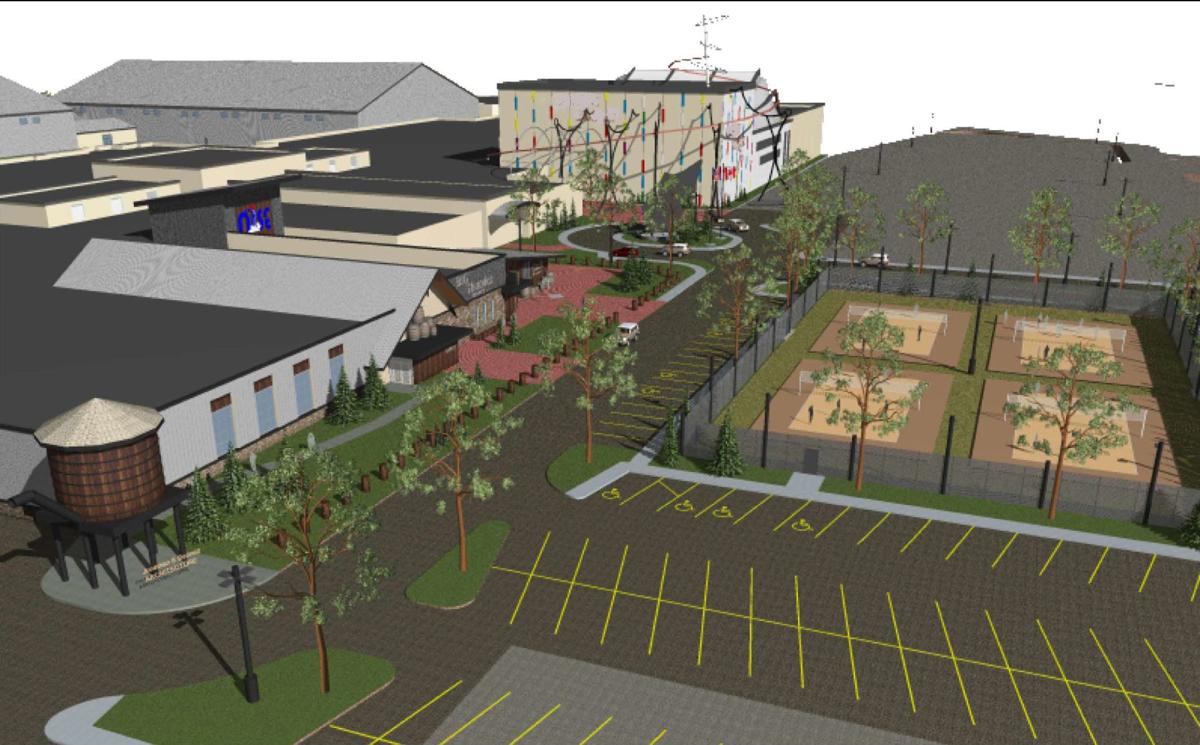 An architect's rendering of the renovated Summit Park Mall, with Big Thunder Brewing Co. and volleyball courts in the foreground and fields houses in the back. (Courtesy Jonathan E. Bennett Architecture) 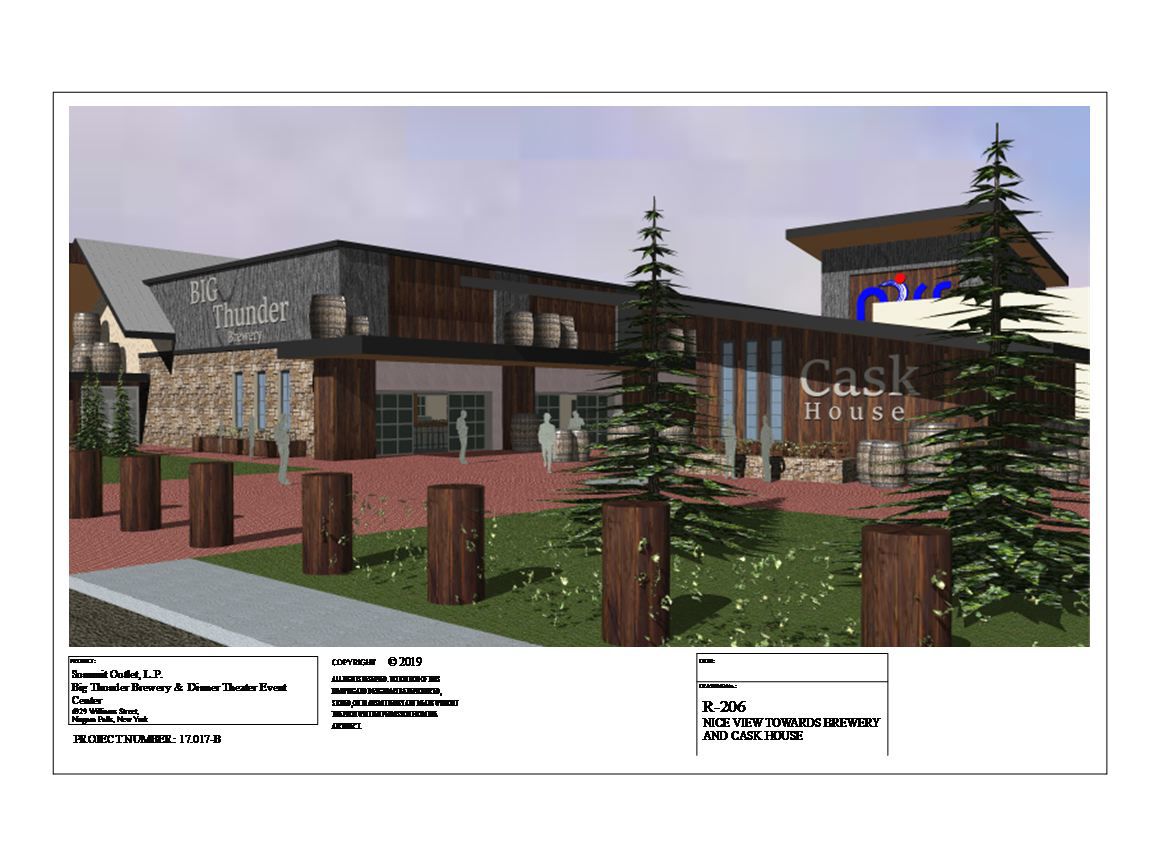 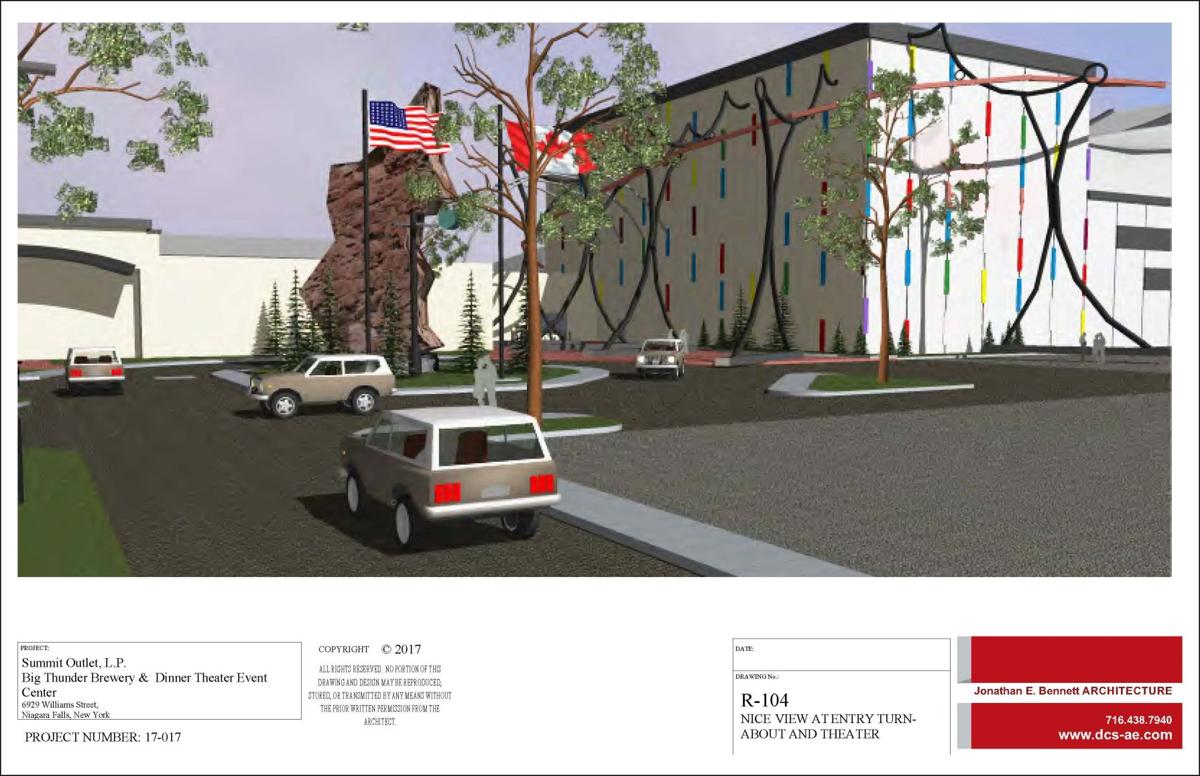 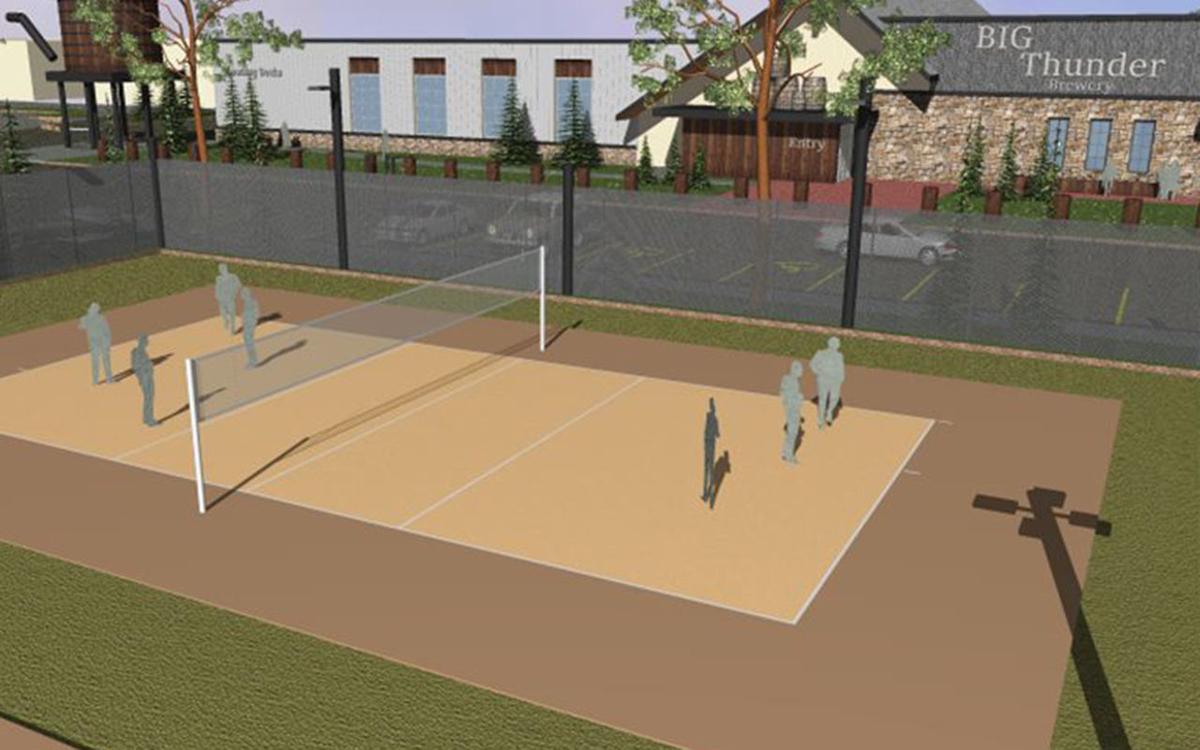 The sound of a baseball bat connecting with a ball rips across the vast room, as players from Niagara County Community College's team practiced their swings Thursday morning amid a sea of netting.

But this isn't your ordinary setting for batting cages.

This is the inside of the former Sears store at Summit Park Mall – part of the new Niagara International Sports & Entertainment Center.

And it's just the beginning of what owner Zoran Cocov envisions as a $2.2 billion reuse project to bring new life to an aged but empty retail complex, while drawing hundreds of thousands of visitors to Western New York.

That is, if he can pull it off, without a strong track record of accomplishment, on a site that has confounded previous attempts at redevelopment. The mall has been mostly vacant for years, a prior attempt to buy and release it fell through, and the adjacent property that Cocov owns was previously targeted for a $600 million theme park that was abandoned when financing collapsed.

Now, the Canadian developer – who purchased the vacant and derelict Wheatfield mall in 2014 – is kicking off the first phase of a multiyear effort to convert the 48-year-old mall and 560 acres of land into an entertainment and sports destination rivaling some of those found in other parts of the world.

Cocov's goal is to create a facility capable of hosting practices, games and tournaments – attracting school-age teams and their fans from hundreds of miles around. At the same time, the complex would provide other entertainment and dining options to satisfy visitors and locals, including a microbrewery and sports bar, a fitness club, a family fun center, an adventure park and sports spa.

And there's plenty of parking in the mall's existing lot: 4,700 spaces.

"It’ll be a stop-and-stay center, something where they come in and hang out for a little while," said Neal T. Turvey II, the facility's director of athletics and events.

Some elements are already in temporary homes, like the batting and pitching cages, a new gym inside the former Sears auto parts department and a combination basketball-volleyball court in the former tire storage warehouse.

Others, including the restaurant and adventure activities, are short-term plans, with construction to start on the first of two new fieldhouse buildings in April or May.

But long-term plans include a 600-room hotel, a 10,000-seat hockey arena anchored by a new Ontario Hockey League team, an indoor water park, a domed theme park and a senior residence with independent living, assisted living and memory-care units.

“We’re setting this up to be an event facility. We want something where people hang out in Niagara Falls a little longer," Turvey said.

Richard J. Sterben, a veteran commercial real estate broker helping to arrange the project financing, said Cocov is "self-funding" much of the $40 million first phase, and already has much of the money needed for the first fieldhouse. He said that he and his partner, Laniey Anastasia, are working to secure major funders and partners for the rest of the venture – including the $6 million needed to purchase a hockey franchise.

The developer has already been talking with various local high schools and colleges, as well as leagues and other sports organizations, to drum up interest. Sterben and Turvey said they're confident that they will be able to draw more than 900,000 athletes, family members and fans in the first year, with attendance growing from there to 1.2 million by the third year, based on existing commitments. About 80 percent of the playing time is already booked.

"We’ve had conversations with every college in the area. Everyone’s interested," Turvey said, citing the Thunderbirds, Niagara Rapids, Niagara County volleyball and the Niagara-Wheatfield Athletics Association.

It's a highly ambitious project for a developer with a limited record. Cocov is a real estate broker and developer who owns a few mixed-use, retail, residential and raw land developments in Southern Ontario. He was a partner in the Crosslink Bridge venture that sought unsuccessfully to build a new international bridge in Niagara Falls, Ont., with an outlet mall, hotel, museum and music hall.

He launched Cocov Destinations in partnership with StoneCreek Partners. Besides his NISE project in Wheatfield, he proposed creating the Water City Niagara Falls resort near Great Wolf Lodge in Canada but that hasn't come to fruition yet. He's managed the city's Sal Maglie Stadium in Niagara Falls for the past four years.

Built and opened in 1972, Summit was at one time a thriving mall, but deteriorated over the last few decades and changed hands multiple times, as changes in shopping patterns led shoppers and stores to leave. By the late 1990s, the 800,000-square-foot mall was mostly vacant, and the last store, Sears, closed in August 2018. The mall fell into bankruptcy in 2009.

Cocov paid $7 million for Summit and the adjacent site - after a prior purchase effort fell through. His proposal envisions a three-pronged redevelopment effort, starting with the Sears store.

Besides batting cages, the gym and the basketball-volleyball court, Cocov carved out a space in the former store for bumper cars, and is bringing in a bicycle shop and an sports-specific training and fitness facility.

Those will move once he builds two identical 96,000-square-foot metal fieldhouses on part of the back parking area, with three turf fields and a set of three smaller rubber-floor courts in each. They will be connected to each other and to the center of the mall through a 1,500-square-foot covered walkway and common area.

Groups will use the indoor facilities under leases beginning in October, when the first fieldhouse is expected to open. Adults will be able to use the facilities in the evenings.

That will be followed by converting former Toys R Us and Save A Lot space into the 29,000-square-foot Big Thunder Brewing Co. microbrewery, tap room, dinner theater and sports bar restaurant. There's an outdoor bar and gathering space, dubbed the Cask House. A fitness club and personal training studio will occupy another 40,000 to 50,000 square feet.

A sporting goods store and uniform shop are planned. The fun center would feature miniature golf, bowling, laser tag, an arcade, electric go-carts and party rooms. There will be a 5K obstacle course inside.

Cocov would construct the Lantern of Niagara senior community, with 60 to 120 units.

For the $195 million second phase, Cocov would construct a dual-rink hockey arena and event venue centered around the 20-team OHL's fourth U.S. franchise, with an attached hotel of 600 suites. About 200 suites would double as private boxes for 12-14 guests, overlooking the ice.

The developer is now talking to other hockey stadium owners along the East Coast to find a joint-venture partner to own the team and stadium, and Sterben said he “could probably have commitments for that in the next three to four months.” The hotel would be flagged, and Sterben said he has already talked to three companies about using their brand.

“We’ve got enough interest in it, because this is unusual,” he said.

The arena and hotel building, located near the corner of Sawyer Drive and Williams Road, would also feature an 80,000-square-foot water park.

In Phase 3, Cocov wants to take one of the three lakes on the adjacent land and transform it into a domed saltwater beach pool resort, along with an outdoor amusement park and live performance theater. The 2-million-square-foot phase would cost $2 billion.

An architect's rendering of the renovated Summit Park Mall, with Big Thunder Brewing Co. and volleyball courts in the foreground and fields houses in the back. (Courtesy Jonathan E. Bennett Architecture)