Subscribe for $1
Read Today's E-Edition
Share This
Buffalo Next: Music store has downtown Niagara Falls singing a new tune
0 Comments
Share this
Support this work for $1 a month

Daredevil Records is taking the plunge in Niagara Falls

The store sells new and used records, CDs, cassette tapes and vintage T-shirts, and buys used merchandise for cash or credit. Audio equipment scattered throughout the lounge allows customers to listen to music before they buy it. Retro Walkmans and Discmans are also available to use for a fee.

"Generation Z, they never got the chance to experience that," Berry said.

Daredevil customers can kick back and relax in the lounge while sipping such musician-endorsed refreshments as Oakland Coffee from the band Green Day and Johnnie Ryan Moneybag soda from Gene Simmons.

Berry received a City of Niagara Falls Minority and Women Business Enterprise grant for the project, which she said was instrumental in deciding to open the business.

"It was the flick I needed to jump off the cliff," she said.

The store is in a cluster of three historic but long-neglected buildings in the heart of the Falls near the burgeoning Third Street neighborhood. The century-old, three-story buildings were recently redeveloped by Savarino Cos. in a $3.5 million project that turned them into a single complex and created a mix of 10 apartments and more than 4,000 square feet of commercial and retail space.

Osmow's Shawarma, a fast-casual Mediterranean restaurant, will open a location next to Charley's Philly Steaks inside the food court at the Walden Galleria this spring.

The restaurant offers modern takes on classic Mediterranean and Middle Eastern dishes, and is known for its shawarma dishes and wraps. Dishes comprise a protein (chicken, beef, lamb or falafel) over rice or fries, or on a thin, warm-grilled pita.

The chain was started by Egyptian immigrant Sam Osmow, who now has 140 locations in the United States and Canada.

At one point, Home Today home decor store owner T.J. Miller was considering opening two more stores in addition to his two locations at the Fashion Outlets of Niagara Falls and the Eastern Hills Mall.

Now, he will close both of those stores and return to a career in real estate.

"Crazy how things can change in just a short period of time," Miller said.

He blamed a perfect storm of factors that contributed to the stores' failure.

First came the pandemic, which closed mall stores like his for an extended period.

The labor crunch made it difficult for him to fill positions and keep the stores staffed – especially when workers were out sick themselves.

Then, the BFLO Store closed at the Eastern Hills Mall, dampening traffic and sending his sales dropping dramatically at that location, he said.

The most recent stumbling block was inflation.

"Dramatic inflation just pushed us to the edge," he said.

Miller anticipates its last day will be Jan. 22. Liquidation sales are ongoing, and everything is for sale, including the fixtures.

Abbott’s Frozen Custard has been using the same custard recipe for 120 years, churning it in small batches throughout the day, and wants to bring it to Western New York.

The eatery is seeking franchisees in the area as it hopes to expand from its current 100 locations. Its closest store is in Brockport.

The company was founded in 1902 by Arthur Abbott, who sold custard at small traveling carnivals along the Eastern Seaboard. The first permanent shop opened in Rochester. Current owners Leonard and Thelma Screiber added franchising to the business model.

Marketing, advertising and public relations agency Mower has been awarded top honors from three different industry organizations, and 65 awards for the year, overall.

The Drum recognized Mower for its website rebrand strategy and design dubbed "Brand as Friend." It awarded the agency its "Best B2B Agency Promotion" award. PRWeek named the agency to its 2022 Best Places to Work in its midsize agency category, recognizing its positive work culture that makes employees feel valued and motivated. And Chief Marketer named Mower to its CM200 list, which recognizes the best engagement and activation agencies in the country.

The A&W restaurant planned for Niagara Falls is getting tax breaks.

What would Gov. Kathy Hochul's plan to spur housing developments across the state mean for the Buffalo Niagara region?

The Buffalo Niagara Partnership is laying out its priorities for this year.

Edwards Vacuum is seeking $17 million in tax breaks for its big plant in the Town of Alabama.

Frequentem Brewing Co., a Canandaigua-based brewery, will open in the former Barcalounger factory in the Old First Ward.

Gov. Kathy Hochul is proposing a $1 billion initiative to improve access to mental health services across the state.

Opponents are taking a stand against a proposed apartment complex on Maple Road in Amherst.

Neighbors are criticizing Douglas Jemal's plans for a five-story building at Elmwood and Bidwell avenues in Buffalo.

Nurses at the Veterans Administration hospital in Buffalo say management there needs to do better planning for disasters, like last month's blizzard, and to boost staffing.

Delaware North bought a hotel near the Grand Canyon.

Remember A&W restaurants? One is coming back to Western New York.

The Aldrich & Ray building in Buffalo finally is getting the historic designation its owner has long sought.

Lackawanna officials are looking for developers for a two-acre site on Abbott Road.

The latest class of 43North winners is beginning to settle in.

Bison Botanics wants to branch out into new segments of the state's legalized cannabis market.

A state agency is doing stabilization work at the historic Hutchinson Chapel by the Peace Bridge.

Cornerstone Community credit union is looking to expand in Lockport.

A wind turbine components manufacturer is planning to bring some of its offshore production to a site in Lockport.

The John R. Oishei Children's Hospital in Buffalo won a designation that it believes will play a big part in stabilizing its finances.

The United Way of Buffalo & Erie County is setting up a relief fund to aid nonprofit organizations that help community members impacted by last month's blizzard.

Spectrum Health and Human Services has a new CEO, and it's a familiar face.

Efforts to build up the region's workforce are getting a boost from $1 million in new state funding.

Father Sam's Bakery is looking to expand its East Buffalo bakery, and it wants tax breaks to help pay for it.

1. Damar Hamlin's Chasing M's Foundation isn't so little anymore. With donations flowing in since the Buffalo Bills safety suffered cardiac arrest during a Jan. 2 game, the foundation now needs to make fundamental changes to manage and distribute its assets and to ensure the proper oversight, experts said.

2. For looted stores, a costly recovery: Stores looted during the December blizzard have been scrambling to reopen. But the process is involved and insurance doesn't always cover the costs.

3. Bounce back for Buffalo Niagara economy: The value of all the goods and services produced in the region, which dropped by 3.4% during the pandemic, came roaring back last year, with a 5.3% gain.

4. The Bills make me want to shop: How Buffalo Bills merchandise is flying off shelves this season.

5. How will Western New York's higher education institutions recover from Covid-19? Enrollment at some local schools is holding up, but others are struggling to attract students. 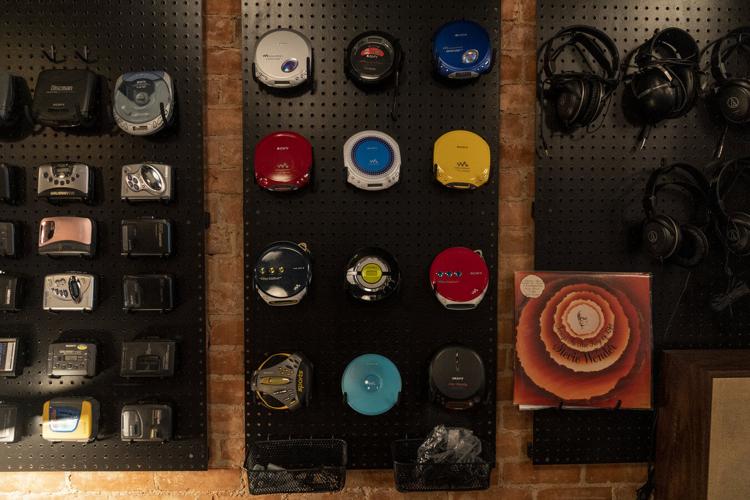 Tape decks and CD players, as well as many record players, all available for use, contribute to the "listening lounge" vibe at Daredevil Records in Niagara Falls, Jan. 11, 2022. 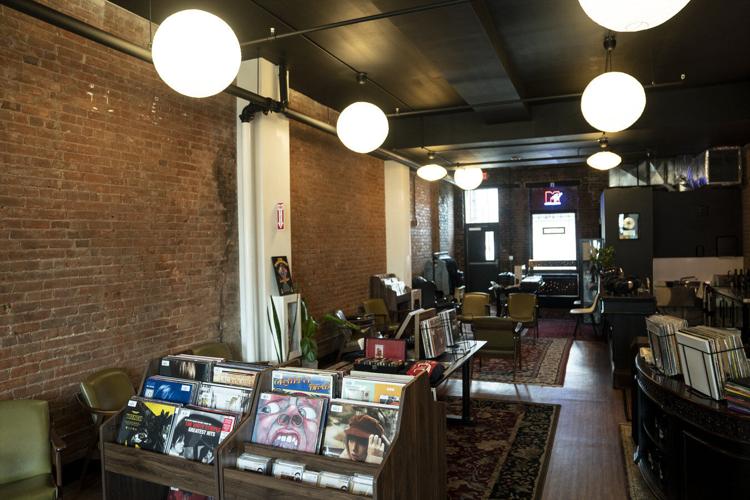 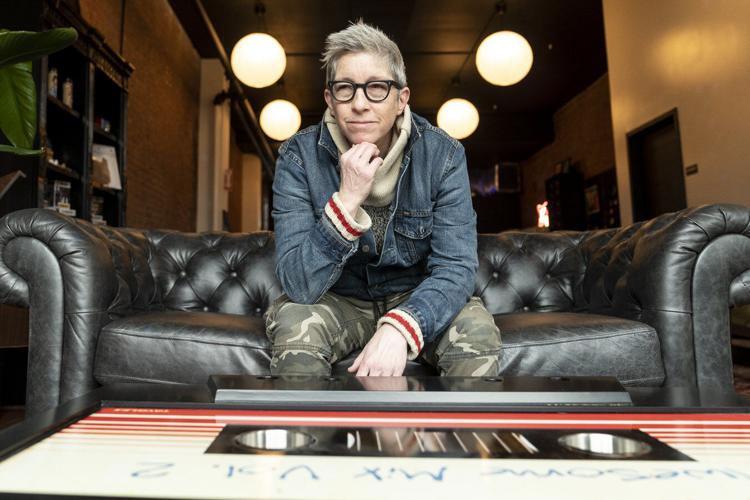