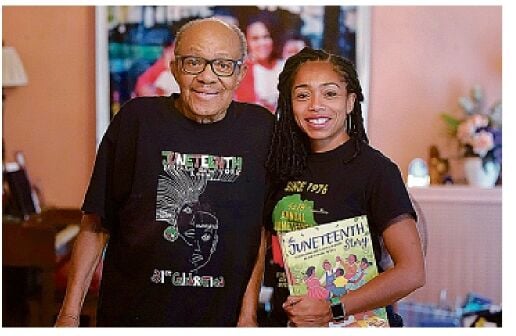 Judson Price stands with his granddaughter Alliah Agostini at his home in Buffalo Friday, June 17, 2022. 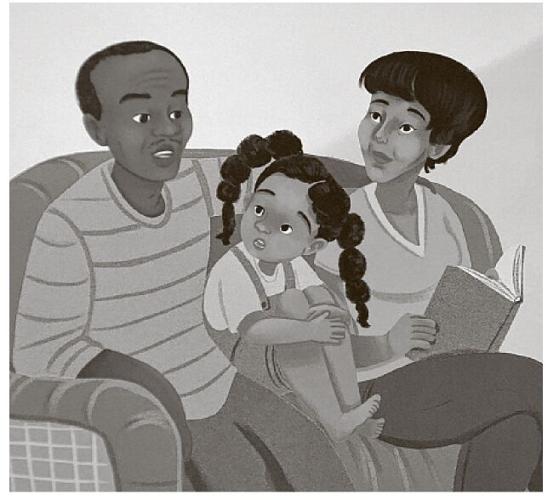 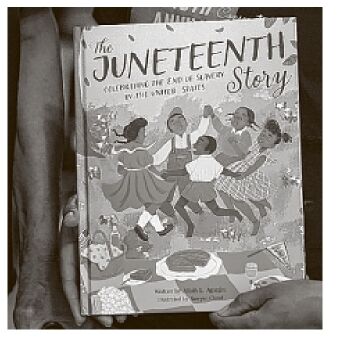 Above, Alliah Agostini holds a copy of her children's book at her grandfather's home in Buffalo on Friday. At left, in her book about the Juneteenth story, Agostini is pictured on a couch sitting between her grandfather, Judson Price, and her late grandmother, Frances - people the author considers to be her greatest teachers.

The question, the end to along conversation, caused Judson Price to offer a quiet laugh, though he was absolutely ready with an answer.

At 91, after everything he has seen in his long life, did a founder of Buffalo’s Juneteenth celebration have one lesson for the rest of us?

He did, a point reflected in the admiration of Alliah Agostini, 39, a granddaughter who describes him as “one of the figures in Buffalo who have been doing the hard work for a long time.”

She spoke Thursday from the highway, while her husband, LeVaur, drove and her young children, Daphne and Alistair, waited out the ride. They were traveling from their New Jersey home toward Buffalo and Agostini’s5p.m. Fri day reading and signing of “The Juneteenth Story: Celebrating the End of Slavery in the United States,” her new children’s book released just before this year’s Juneteenth, the first formally celebrated as a national holiday.

The signing, at the Frank E. Merri weather Jr. Library on Jefferson Avenue, was scheduled more than a month ago, a kind of celebratory gateway to a Buffalo Juneteenth celebration last held in full before the pandemic. It was set up before a man with a combat-ready weapon entered a Tops Market just down the street from the library and killed 10 Black women and men, a mass murder investigators say was based entirely on racist malice.

“It is still hard to stomach, and it just blows my mind that the same kind of hate and in justice came to my hometown that gave life to Juneteenth to begin with,” Agostini said.

Price was planning to be there Friday night for the signing. For Agostini, he is the last of the four grandparents who helped shape her outlook on the world. The book, illustrated by Sawyer Cloud, offers homage to that influence:

Agostini, who will also sign books today at Juneteenth in a Zawadi Books tent, said the story is built around a couple of narrators modeled on Price and his late wife, Frances. In her wounded hometown, she said the power of her grandfather’s life “matters more than ever.”

Price’s mother and father arrived in Buffalo as part of the Great Migration, a journey shared by countless African American families who left the Jim Crow South. Price, an Army veteran, endured and pushed through the racial cruel ties of his youth to become a teacher and guidance counselor “who educated what seems like half the city,” Agostini said, “a man who was always doing things for people, and then someone tried to assassinate him.”

She spoke of the night in 1993 when Price–deeply involved in trying to close down a violent Winslow Avenue narcotics operation on the street where he lived – was shot in the head at the front door of his home. Two teenagers were later convicted of attempted murder, and investigators described the attack as an act of retaliation against Price’s high-profile courage. He recovered. Almost 30 years later, he remains in that house and speaks with love of his neighborhood.

“This was one guy,” he said of the shooting, and he asks – if you want to think accurately of his community – that you consider the legion of city teens he knew as students throughout his life, teens who went on to build solid lives and careers.

Their hope and diligence inspired his healing. In the heart of a city now staggered by raw grief, he sees the same kind of faith–the reminder of the love and decency you look for in your neighbor – as the only means of somehow working through the bloodshed at Tops. Price was more than simply a regular. As a member of multiple community groups, he was part of the determined effort that finally brought a grocery store to Jefferson Avenue.

A guy who always valued his own garden, a guy who remembered when you could easily find a market in any city neighborhood, had lived to see a day when it was hard for a parent to buy a fresh vegetable over the counter in Cold Spring or Broadway-Fillmore. He was one of many who took on that collective problem, and the result was a new Tops, 19 years ago.

Price said he was routinely greeted by Aaron Salter, the security guard who would be shot to death while protecting shoppers, and he recognized many of those who were murdered as fellow customers he often saw in the aisles.

“What happened here was unbelievable, but it happened,” he said. He addressed the impossible and grotesque contradiction, how a white supremacist brought such hatred and poisonous delusions into a civic “meeting place,” a store where women and men handling the quiet obligations of their lives could both shop and find the respite of everyday community. Nurturing those qualities equates to what he sees as a central mission and purpose, a simple commitment to the right of everyone – a word on which his emphasis wraps in the whole city – to a safe and quiet life, and the grace that comes from it.

That was the defining nature of the 10 who died at Tops, and he speaks of the one memorial of deepest meaning: It is critically important that greater Buffalo has the emotional stamina to guarantee the immediate sorrow and concern are not short-lived, but instead turn into a lasting engine for transformation – for the idea “that more people really see the problems and want to help.” Juneteenth, to Price, is a symbolic start.

With others from Buffalo involved with the celebration, he has been asked to appear on “Sunday Today,” a national television platform from which Price expects to make this point about the gathering: “We want to show that people can and definitely should get together,” he said, “and that we’re not afraid.”

From the beginning, that notion was built into Buffalo Juneteenth. In the mid-1970s, as the nation planned for a bicentennial celebration, Price was a passionate member of B.U.I.L.D. of Buffalo – an advocacy group led by the late and legendary William Gaiter and dedicated to “direction and unity,” beginning in the Black community.

While the national celebration re called 200 years of American freedom from British rule, Price said B.U.I.L.D. leaders pondered this question: “How do we celebrate our freedom?”

They learned of the tale behind Juneteenth – how formerly enslaved people in Texas rejoiced after an 1865 declaration of their liberty, in Galves ton–once members of B.U.I.L.D. did some research and brought back the story. Gaiter, Price and the late Claudia Sims – who becamealongtime presi dent ofBuffalo Juneteenth–embraced that information.

Forty-six years lat er, Price takes part in Juneteenth as a proud grandfather and great-grand father, which is certainly how he re sponds to Agostini, who grew up in Buffalo, went to city schools and then graduated from Harvard.

She initially builtacareer in mar keting, but she said raising her kids made her increasingly aware of the books she wished had existed when she was a child. This newly published tale of Ju neteenth is a result, built around the people she considers her greatest teachers. Her grandfather will be there to listen Friday night, on the cusp of a festival he helped create, not far from the closed supermarket – now an ach ing shrine–that he helped bring to the neighborhood. As for the question aboutalesson, his answer came with his farewell.

The older you get, he said, the more you realize the importance of your own example, especially as perceived by others who might be hurting or un sure. Based on a Buffalo community he loves, Price hopes he defines that example in two ways. “It’s about not giving up,” he said, “and you don’t leave.”

Dolphins' Christian Wilkins on scrap with Josh Allen: 'With alpha males, that’s how it goes'

Buffalo Bills quarterback Josh Allen got a 15-yard penalty for unsportsmanlike conduct when he pulled off the helmet of Dolphins defensive tackle Christian Wilkins in the fourth quarter of Buffalo's 21-19 loss.

Bills quarterback Josh Allen further clarified the “football stuff” that was happening at the bottom of the pile between he and Dolphins defensive tackle Christian Wilkins during Sunday’s game.

Harlan and Green were perfect for a strange game that saw the Bills dominate in yards and time of possession and still lose.

Review: At KeyBank Center, a love fest between the Goo Goo Dolls and Buffalo

From the first chord of “Yeah, I Like You,” through an hour and 45-minute set, bassist Robby Takac and singer-guitarist John Rzeznik, with the assistance of their backing band, showcased the working-class energy and spirit of Buffalo, and the crowd was not short on appreciation.

Bills cornerback Dane Jackson returns to practice: 'I can’t do nothing else but smile'

On Wednesday, Jackson participated in practice for the first time since leaving the game against the Tennessee Titans in an ambulance after a violent collision with teammate Tremaine Edmunds.

Judson Price stands with his granddaughter Alliah Agostini at his home in Buffalo Friday, June 17, 2022.

Above, Alliah Agostini holds a copy of her children's book at her grandfather's home in Buffalo on Friday. At left, in her book about the Juneteenth story, Agostini is pictured on a couch sitting between her grandfather, Judson Price, and her late grandmother, Frances - people the author considers to be her greatest teachers.