The dates and letters on the tombstone of Christina Billittier were fading away. After decades of rain and snow had worn at the grave, Frank Billittier decided he had better intervene on behalf of his older sister.

Years ago, Frank talked it over with a craftsman from a monument company. The guy said it would run about $75 to physically darken the letters, at a time when that equated to a lot of money. Frank mentioned it to his wife Dorie, figuring she would agree it was just too much, but instead she told him without hesitation:

You have to do this for your sister.

Now, when Frank arrives at Holy Sepulchre Cemetery in Cheektowaga – opened originally as a Catholic burial site for the Italian-American community – he can see Christina's grave from a long distance away. Around her are the faded stones of other children, many born in the early decades of a century when contagious illness put the lives of boys and girls at constant risk.

Frank goes there often, and his visit just before Memorial Day continues the annual tradition of his late parents, Elizabeth and Anthony Billittier. His sister died of the Spanish flu as a 2-year-old in October 1918, at the searing height of the flu pandemic.

Standing before Christina's grave, he explained how one of his uncles, a stone mason, left the "h" out of her first name and gave the last name an extra "i," one of several variations on the family spelling. While Frank's immigrant parents kept a photograph of Christina on the sitting room wall, they rarely spoke of the daughter taken by a flu outbreak that claimed 50 million lives around the world.

“I think when you lose a child,” Frank said, “you don’t want to talk much about it.” 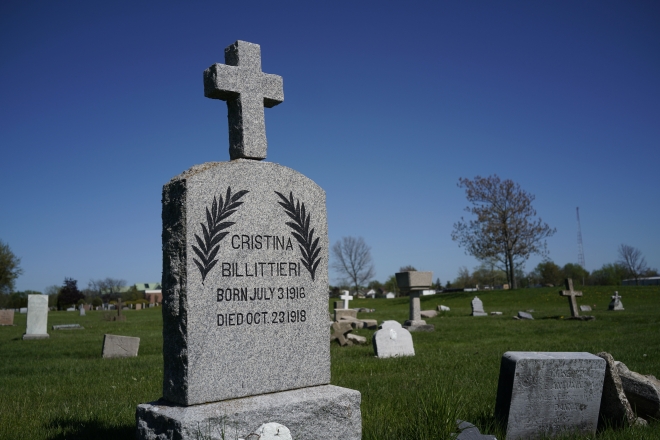 The gravesite of Christina Billittier, who died in the Spanish flu outbreak of 1918, at Holy Sepulchre Cemetery in Cheektowaga. Her first and last name, her brother says, are slightly misspelled on the stone. (Derek Gee/Buffalo News)

At 88, he was born 14 years after his sister's death. Yet he has been thinking a lot about Christina, even dreaming of her, reflections tied almost certainly to what he just endured.

Frank, a widower, became ill last month with Covid-19, and then recovered. The virus is responsible for nearly 600 deaths in Western New York, and Frank is intensely conscious of the astounding arc that links two siblings through pandemics that swept into Buffalo, more than 100 years apart.

In Spanish-flu-stricken Buffalo of 1918, death and fear marched hand in hand

Covid-19 took away Frank's sense of taste and smell and left him deeply tired. While he downplays his own symptoms – "I didn't have it so bad," Frank insists – he ran a fever for a few days and said the virus affected his thinking, leaving him to see the world almost through a kind of mist.

“It was my memory,” he said. “It didn’t completely disappear, but it was changed.”

At the cemetery, his gentle observations offered proof that his clarity is back. Frank, a sharp and thoughtful great-grandfather, showed no signs of weariness as he walked to the scattered gravesites of his family, including the tombstone of another sister, Elizabeth Balicki, who died last month at 96.

Her passing leaves Frank as the last of nine siblings. He was still quarantined by Covid-19 during Elizabeth's services, and it pained him that he could not attend. His parents' photo of Christina now hangs on his wall, and in a sign of how Frank does not retreat from changes in the world, he texted us a photo of that image – the first photo he had ever sent by text in his life.

His illness is proof of a hard truth about his generation: So many Americans in their 80s or older faced tremendous hardships in their youth, and now – at what should be a chance for peaceful reflection in their extraordinary lives – they find themselves in the crosshairs of another crisis.

Christina Billittier was lost to the Spanish flu, as was a 4-year-old cousin, Alberto DePlato, a child also buried at Holy Sepulchre. In 1932, Frank was born into the economic vise of the Great Depression – he pointed out some tombstones near Christina's that were clearly handmade by grieving parents, who had little money – but he finds a certain resilient warmth in the memory of communal humility and struggle.

He took part in air raid drills as a kid during World War II. He remembers the grief when a cousin, Louis DeSantis, “a wonderful guy” from South Division Street, died in combat in Italy. Frank moved past those hard times to raise three children with Dorie and to retire as an inspector in the city architect’s office, but he was best-known for the job he did three nights a week.

In the 1950s, his brother Lou purchased Chef’s, a landmark restaurant in their old Buffalo neighborhood. Frank started off washing dishes – “In those days, that’s the only way you could work yourself up” – and he eventually became a well-loved waiter, a face the regulars all knew.

Dorie, his wife of 51 years, is also buried at Holy Sepulchre, beneath the same stone as Frank's parents. He visits that grave to ask the three of them to do what they can do whenever someone he loves is facing surgery, or any major challenge.

In retirement, Frank travels and spends winters in Florida. Typically he flies home in the spring, but he decided to drive in March when his granddaughter Christina – named for the great-aunt lost so long ago – learned the pandemic was abruptly ending her internship at the Walt Disney World Resort.

"Come on," her grandfather said. "You're coming with me." 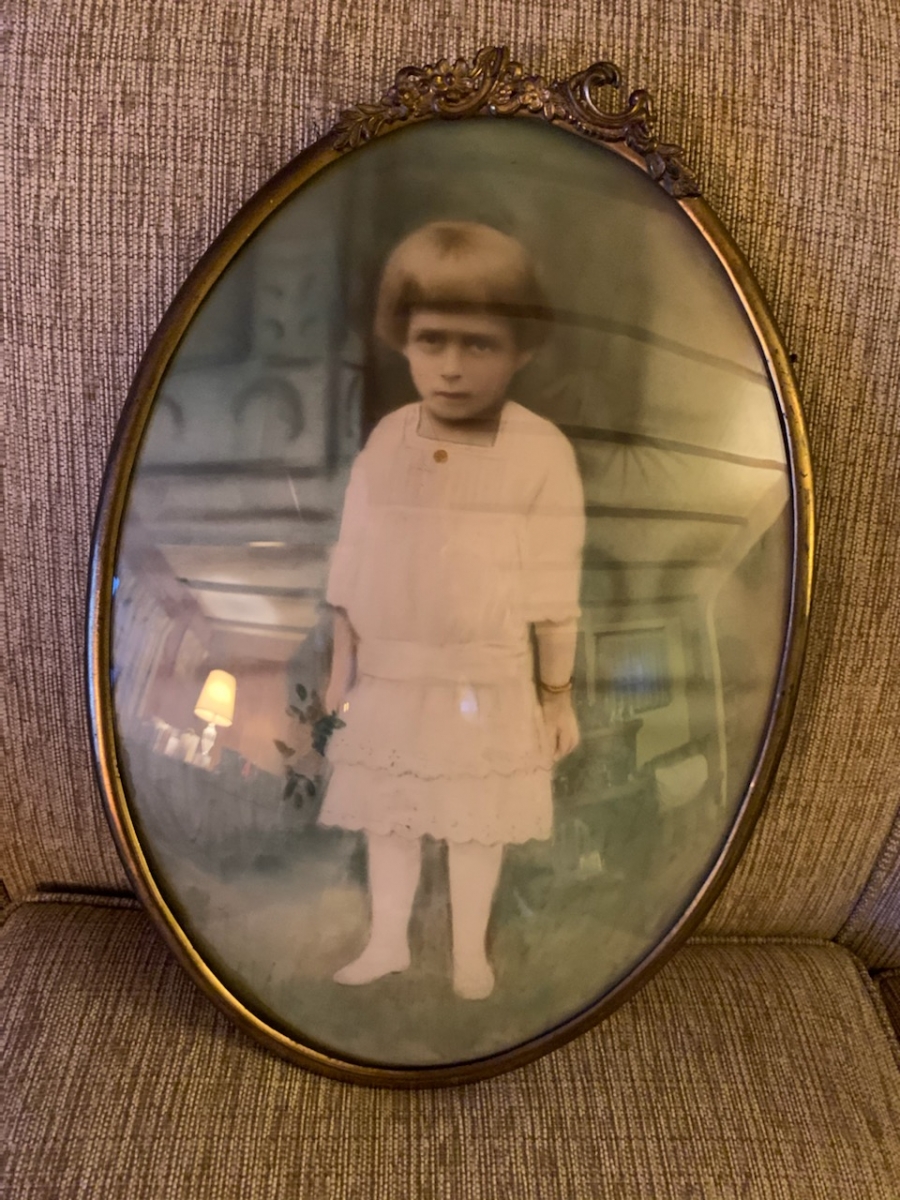 Christina Billittier, lost to the Spanish flu at 2. Her brother Frank sent this image, the first one he ever texted on an iPhone. (Family photo)

Together, they made the drive to Buffalo. Frank caught the virus a few weeks later, maybe on a trip to a grocery store. He is grateful about his recovery – he says with appreciation that the first meal he could taste again was a breakfast of ham and eggs – and he goes to Holy Sepulchre to offer thanks above the graves of those he loves.

The tombstones of his parents, his wife and many siblings, cousins, aunts and uncles: He feels a need to visit them around Memorial Day. His mother and father taught him to make that pilgrimage for the holiday to the cemetery, and in that quiet place he finds far more solace than grief.

Frank sees no point in trying to work out why he is the last of nine children to endure, or why he recovered from a virus that can be of lethal risk to men and women of his age.

“Only one person in the world has the power to understand that, and I don’t question Him,” he said. “He’s been very good to me.” 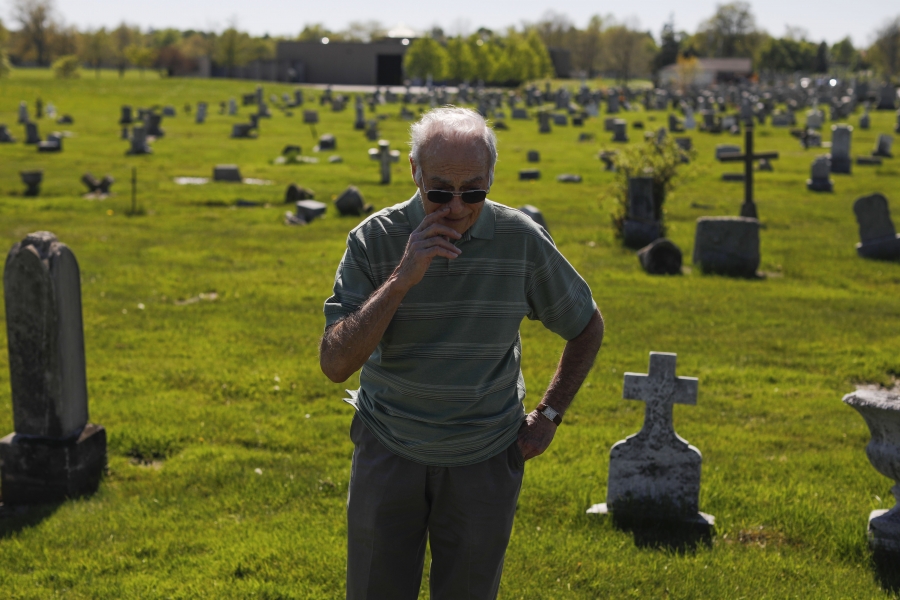 Frank Billittier, who recently recovered from Covid-19, visits the gravesites of his family members, including his sister Christina, who died at the age of 2 during the Spanish flu outbreak in 1918, in Holy Sepulchre Cemetery in Cheektowaga. (Derek Gee/Buffalo News)

Often, Frank finds himself thinking of his Swan Street childhood, how his mother loved to bake fresh bread, how she would pull a hot loaf from the oven for quick slicing by her eager husband. With the aroma calling the whole family to the kitchen, Frank's dad would add black pepper, some olive oil and a touch of red pepper – then give a slice to every person in the family.

“Oh my God,” Frank said. Nothing else could taste quite so good.

Not long ago, he had another dream. Whether it was a ripple of memory touched off by Covid or something else he does not know, but he was suddenly walking into the backyard of his parents' home. His mother was crouched down, digging with ferocious resolve in their garden, while her husband watched with equal intensity.

There was silence before the father turned to the son, addressing the question hanging in the air.

“I don’t know what your mother's doing,” he said emphatically, and before Frank could respond, he woke up to that puzzle.

The youngest brother told the story above his sister's stone, voice trembling from lifetimes bound by love and mystery, expressing faith that he will someday hear those answers from Christina.