Buffalo styles itself as the City of Good Neighbors. Canadians are too modest to say it themselves, but Fort Erie – our next-door neighbor, globally speaking – is proving itself a Town of Good Neighbours.

The spelling is different, but the meaning is the same. Meet Kathy Maxey and Herman Bodde, who live in Crystal Beach, Ont. They are offering peace of mind to Peace Bridge regulars who can’t cross that bridge when they come to it.

Maxey and Bodde have taken it on themselves to check on the homes of five families who can’t be there for this Memorial Day weekend. The border is closed at least through June 21, and maybe for far longer.

One of the cottagers is from California, one is from Sweden, and three are from Western New York, including Jeff Przybylski, a retired airline worker who lives in Buffalo. He and his wife, Linda Ball, own a cottage in Crystal Beach not far from where the long-gone amusement park once stood.

Przybylski lamented on Facebook this month that he could not visit his property. Some of the other commenters – on a group page called “Crystal Beach Ont. Community Talk – Events – Politics or Whatever!” – criticized him as an entitled American.

“It’s not about me sitting on the beach and getting a tan,” Przybylski says. “I’m concerned for property damage and break-ins. That’s where my angst comes from.”

And that’s where Fort Erie’s good neighbors come in.

“Kathy messaged me and she said, ‘I saw your comments on Facebook, and we’ve been watching your house,’ ” Przybylski says. “That took a lot off my mind.”

A week later, another member of the Crystal Beach Facebook group posted this: “Adopt an American. If you live near one of our Western New York neighbours please watch their cottage during the crisis.”

Maxey and Bodde, who live five doors from the lakefront, do more than pick up papers dropped in driveways.

“We check the windows,” she says. “We cut the grass. We do the weed whacker. We rake a bit when it’s needed.” 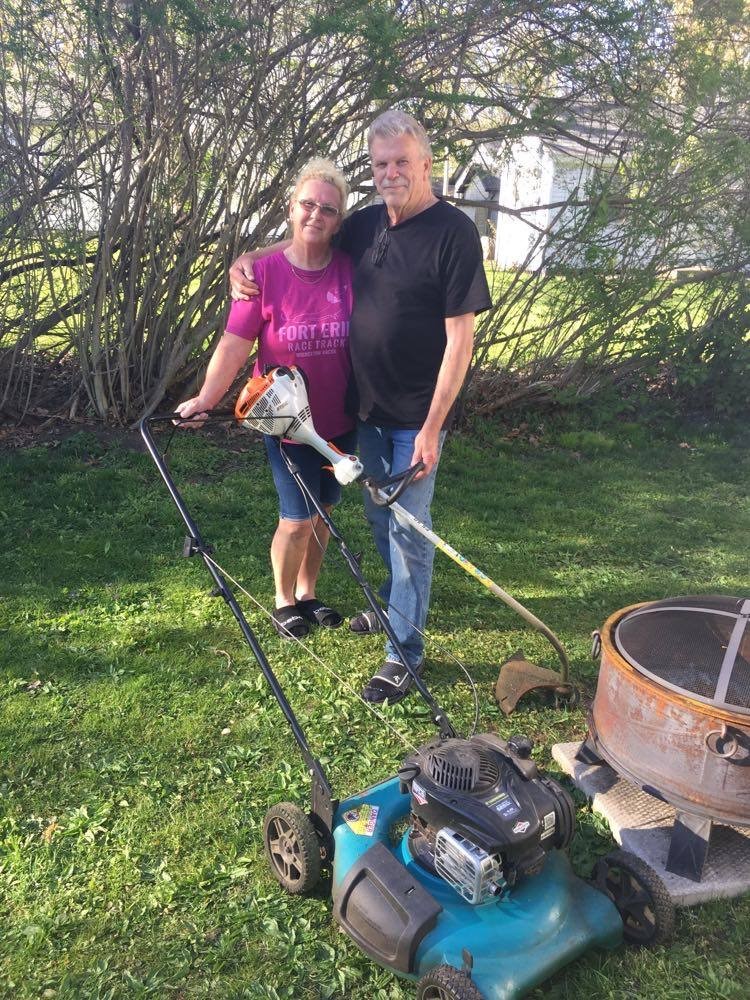 Sounds more like a real job than a favor for friends.

“No,” Maxey says, laughing. “We’re not getting paid. I consider it building a bank account in heaven. My mother taught me that.”

They do get paid by a dozen customers whose houses they tend to year-round, but they recently took on the other five houses on their own strictly because of the pandemic.

Maxey messaged Przybylski this week to let him know his grass was taken care of. He was stunned. And he says he fully intends to pay them, though they say no.

“I never in a million years would ask them to do something like that for me,” Przybylski says. “They are dealing with a lot, you know.”

This is true. Bodde was diagnosed with blood cancer last summer. He gets chemotherapy treatments that sometimes make him violently ill. And when he gets home from all that, he and Maxey make their neighborhood rounds.

“Herman’s father and uncle died of the same thing,” Maxey says. “He is not going to get better. The chemo is about prolonging his life. He is a warrior, and we are going to fight.”

She is speaking on her cellphone as she paces the perimeter of the hospital in St. Catharines, Ont. She’s not allowed inside.

Another American on the Crystal Beach Facebook page elicited around 300 comments and counting this week when she wrote: “I should be able to go to my cottage!!! It has been in my family since 1951.”

One commenter said: “Sorry but this isn’t about your needs, or your sense of entitlement. It is about keeping people alive and healthy.”

Another said: “Staycation in Buffalo. It’s beautiful and Lake Erie is on your side, too.”

“During less extraordinary times,” Mayor Wayne Redekop said, “our American friends, family and neighbours would be welcomed with open arms.”

Last week Brenda Wissenz reopened Beach Town Antiques, her store in Ridgeway, Ont. She hopes American cottagers can cross to Canada this summer; they spend money at her store and at so many others. But, she says, all that can wait until it is safe for the border to reopen.

She lives on the water at Bay Beach, Ont., where almost all of her neighbors are Americans. She and her husband own property in Ellicottville, where they ski in winter.

“Sometimes people ask me, ‘Do you go south for the winter?’ And I tell them, ‘Yes – south of Buffalo.’ ”

This echoes something she posted on that Crystal Beach Facebook page: “We keep an eye out all year round for our neighbours ‘from away.’ ”

That’s a spot-on reference to “Come from Away,” the Broadway musical that tells the story of Gander, a small town in Newfoundland that welcomed passengers from 38 planes forced to land there after the attacks of Sept. 11, 2001. New York Times theater critic Ben Brantley called the musical a cathartic reminder of our capacity for human kindness in dark times.

The same might be said of Maxey and Bodde. Their capacity for kindness — in a time of darkness for themselves, as well as for the wider world – elevates the word “neighbor,” no matter how it is spelled.

Let’s go with the Canadian spelling here. The extra letter values you.

As all good neighbours do.