A girl finds her place in the wilderness and develops her born gift as a healer in this beautifully written, poignant novel by Newbery Honor-winning author Lauren Wolk ("Wolf Hollow"). 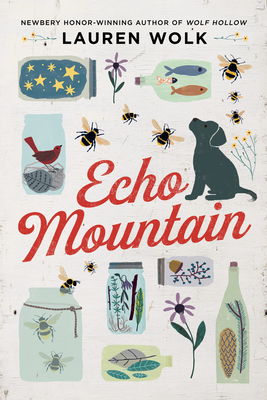 Twelve-year-old Ellie narrates the tale, set in Depression-era Maine. Her father was a gifted tailor and her mother a music teacher, but both lost their livelihoods in the Great Depression and moved with their three children to Echo Mountain to carve out a small farm. Ellie and her father and little brother take to the new life on the mountain, but it's a painful adjustment  for her mother and older sister  "who lived in a brew of fear and exhaustion, lonely for the life they left behind." Wolk is a gifted writer, and she paints an evocative picture of the wilderness life.  "Like my father, I loved the woods. From the start, the two of us were happy with our unmapped life. The constant brightness of the birds. The moon, beautiful in its bruises."

Just as the family finishes building the cabin and settles into the routine of dawn-to-dusk work, a tree-felling accident leaves her father in a coma and Ellie shouldering the blame. With her father lying unconscious in bed, Ellie becomes the one to hunt, trap and fish, although, as an "echo girl," she experiences pain when she kills a creature. Ellie also has a gift for healing, devising her own remedies (including one involving honey and glue) as she experiments with and collects the medicinal plants of the wild. When lullabies and gentle handling seem to do nothing for her father, she upsets her sister and mother in trying to "shock" him awake, whether by dowsing him with cold water or stinging him with bees. A dog leads Ellie up the mountain to an old woman, shunned as the "hag" by her neighbors. The woman is suffering a potentially deadly infection and Ellie comes to her rescue; at the same time the woman teaches Ellie more of the healing arts.  This marvelous novel is perfect for our time, a portrait of hard times and a loving family in crisis – and a girl using her ingenuity, empathy and courage to forge a path toward healing. 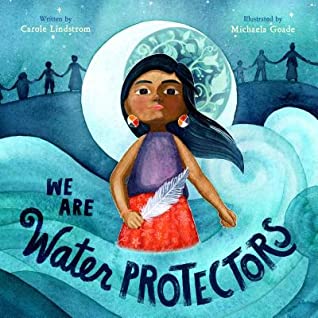 Author Carole Lindstrom is enrolled with the Turtle Mountain Band of the Ojibwe; illustrator Michaele Goade is of Tlingit descent. Their collaboration, solemn as a prayer and inspired by Indigenous movements across North America, is a stirring celebration of water as our most precious resource and a battle cry for humans to rise up to protect it from the "black snake" that threatens to destroy it. The reference to the "black snake" symbolizes the oil pipelines that threaten tribal lands and waterways but could just as easily represent the menace of any industrial or agricultural pollution. "Now the black snake is here./Its venom burns the land./ Courses through the water,/Making it unfit to drink." A young water protector, in native attire, emerges to fight back. "We fight for those/Who cannot fight for themselves:/The winged ones,/The crawling ones./The four-legged,/The two-legged,/The plants, trees, rivers, lakes..." Goade's brilliantly colored illustrations (including a very sinister representation of the black snake)  are marvelous.  In an illustrator's note, Goade notes many of the animals pictured reflect Anishinaabe/Ojibwe clan symbols and the floral designs were inspired by traditional Anishinaabe woodland floral motifs. The book includes an "earth steward and water protector pledge" at the end. 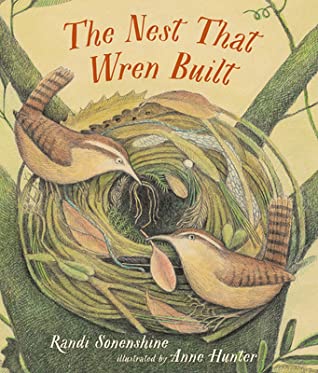 The Carolina wren may drape a snakeskin over the edge of its nest, a trick to scare off predators. This is just one of the many fascinating facts revealed in this clever and informative poem written as a cumulative tale. Debut author Randi Sonenshine offers some lovely poetry here: "This is the moss, softer than suede, stolen from stones cool in the shade to line the nest that Wren built." Hunter's delicately detailed illustrations are a wonder. A helpful glossary and "wren facts" are included at the end. Another fascinating one: "The male Carolina wren builds up to a dozen 'dummy' nests before singing a special song to attract a prospective mate. When a female wren answers the call, he takes her on a tour of his many starter homes.")