Bathing suit? Check, but add a mask for when you're closer than six feet to other beachgoers.

Beach blanket? Check, but make sure to spread it 10 feet away from other blankets.

Volleyball? Sorry, you'll have to leave that home. No group activities allowed.

This is what a day at the beach looks like amid a pandemic.

On Friday, as the nation kicks off Memorial Day weekend, Woodlawn Beach State Park officially opened for the summer season.

Beaver Island and Woodlawn Beach state parks are open for swimming from 10 a.m. to 6 p.m. on weekends only through June 20. After June 20, swimming will be available daily through Labor Day.

The weather couldn't have been nicer Friday, with highs in the 70s and few puffy clouds in the sky.

But the beach was anything but normal as lifeguards and park police patrolled in masks. A couple dozen beachgoers kept their social distance from one another, while news crews circled, trying to capture the surreal moment.

Ian Wojcik, 21, of Orchard Park, came to the beach with a small group of friends, basking in the sun on their spaced-apart blankets.

They made plans the previous night to come after hearing the state beach would be open and brought a Kan Jam set. They were told to leave it in the car.

Wojcik also had a foam football with him, but figured they wouldn't be allowed to toss that around either.

"We want everything to open up sooner or later," he said.

State-run beaches across New York State opened for Memorial Day weekend, but with a slew of restrictions aimed at cutting down density to reduce the spread of Covid-19.

The beaches can operate at only 50% capacity.

All employees and beachgoers are required to wear a mask when they can't maintain social distance.

Visitors should only visit with members of their immediate household and stay six feet apart from others in the water, on the beach or on boardwalks.

Blankets and lawn chairs are allowed, but they must be at least 10 feet apart.

Picnic areas, playgrounds and most concession stands were to be closed to the public.

Tressa Bones of Buffalo brought her four stir-crazy daughters to the beach. They came right at 10:30 a.m., when Woodlawn Beach opened. The younger girls busted out their buckets and shovels to make a sand castle.

"We thought if we came early we'd be able to beat the crowds," Bones said.

They succeeded. Visitors had plenty of room to stretch out their blankets and keep well over 10 feet away from each other. That meant they didn't have to wear masks, but some still did. 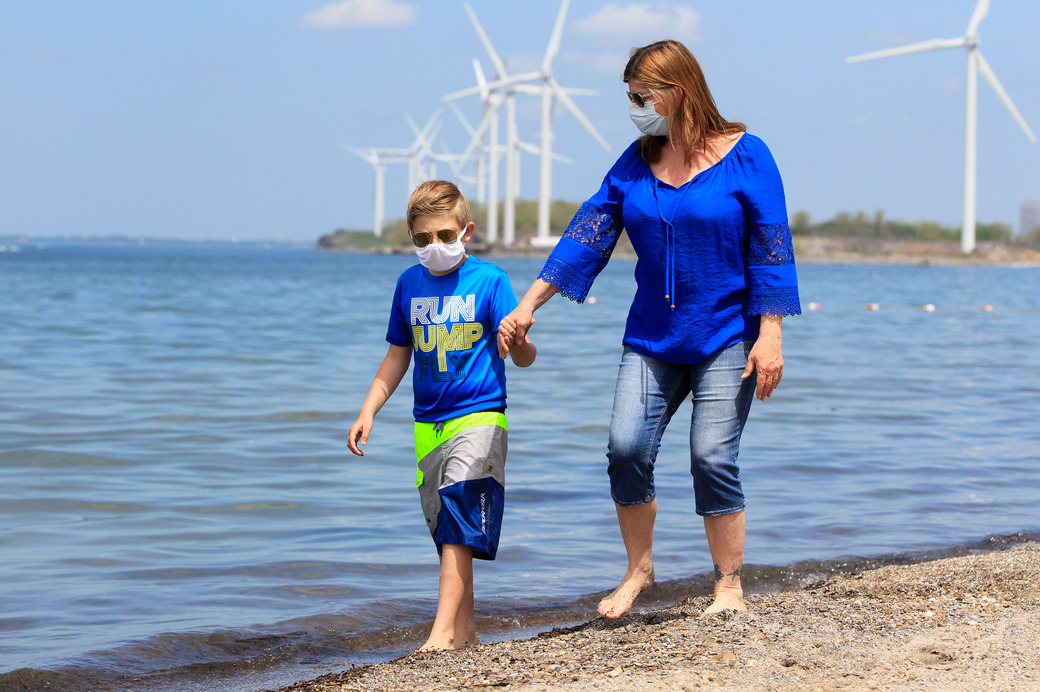 Jill Bauer and her grandson Jace walk along the edge of the water at Woodlawn Beach State Park beach on, Friday, May 22, 2020. (Harry Scull Jr./Buffalo News)

Bones has tried to get her girls out to different kinds of places as much as possible since schools closed their doors.

"You need a forest or water or a trail. Something other than the mile-wide radius around your house," she said.

She's learned a few tricks, though. Keep the trips short and don't bring food or drinks, because almost all public bathrooms are closed.

Jill Bauer of Corfu brought her 8-year-old grandson Jace to the beach.

It was the first time she had seen him since the pandemic began.

When she finally got to see him in person, she said, "My heart just exploded."

Jace and his "Mimi" wore masks and searched for glass pebbles at the edge of the water.

"Look!" Jace said, holding up a stone with a lady bug sitting on it.

Later, they planned to go back to Bauer's property in Corfu.