The transformation of the Northtown Plaza site in Amherst won't restart anytime soon, but the developer said it remains committed to the ambitious project mixing dining and shopping with community space.

Construction on the proposed lifestyle center on Sheridan Drive stopped abruptly in March when the state shut down non-essential construction in New York in the face of the Covid-19 pandemic.

Western New York developers this week received permission to start up construction again. But WS Development said its Station Twelve project remains on hold as it works with its retail and restaurant tenants to determine when the business climate has improved enough to move forward.

Worries over sales have retailers everywhere wary of the future, and that complicates the big projects that developers pitch as game changers in communities.

"We are not going to restart because it doesn't make sense to under the current climate," Brian Sciera, WS Development's senior vice president for leasing, said in an interview.

He said no tenants have asked out of their Station Twelve leases with WS Development. But he said those companies have no budget for new store construction now as they focus on trying to maintain their existing store networks amid widespread coronavirus-related closures.

It's not clear when retailers and restaurant owners will be ready to open new locations, and much will depend on when customers have the financial and public-health confidence to return.

"We believe in Station Twelve and the type of project that we've developed more than ever," Sciera said. "The issue that we have, the same issue that everybody has, is the short term."

Even before Covid-19 upended every aspect of daily life, retailers in this country faced serious challenges as online sales surged at the expense of traditional, brick-and-mortar outlets.

WS Development previously said it was taking longer than expected to fill out its roster of tenants, though executives touted their experience in developing shopping centers and their confidence in the plans for the Amherst site.

Town officials say they're hopeful the project will come to fruition and they doubt the company will walk away after getting this far with the development.

"I was encouraged by what I heard today, because it could have been doom and gloom and 'we're going to have to knock down the size of the project and abandon ship,' " said Amherst Supervisor Brian J. Kulpa, who spoke to a company official Thursday morning. "They did not do that."

The project has proceeded sluggishly since WS Development bought the Northtown Plaza property in 2015.

WS Development cleared out the plaza's tenants over the next several years and opened a Whole Foods Market on the site in 2017. But demolition of the existing buildings on the property didn't begin until fall 2019.

In November, WS Development broke ground on the six planned buildings that would wrap around a central recreational space that would host yoga and concerts in the summer and ice skating in the winter.

Construction was expected to wrap up next month, with the first stores opening as early as this fall, and Sciera said work remained on track as of the beginning of March.

Crews were "very far along" on three of the buildings, had started on the fourth building and were about to start on the fifth structure, Sciera said.

"Construction was cruising," he said.

Then, Gov. Andrew M. Cuomo ordered non-essential construction to stop as part of the state's response to the Covid-19 outbreak.

Partially constructed buildings, some with cinder block walls and others with structural steel frames, sit on the site lined by a chain link fence and pockmarked by piles of dirt and rubble. 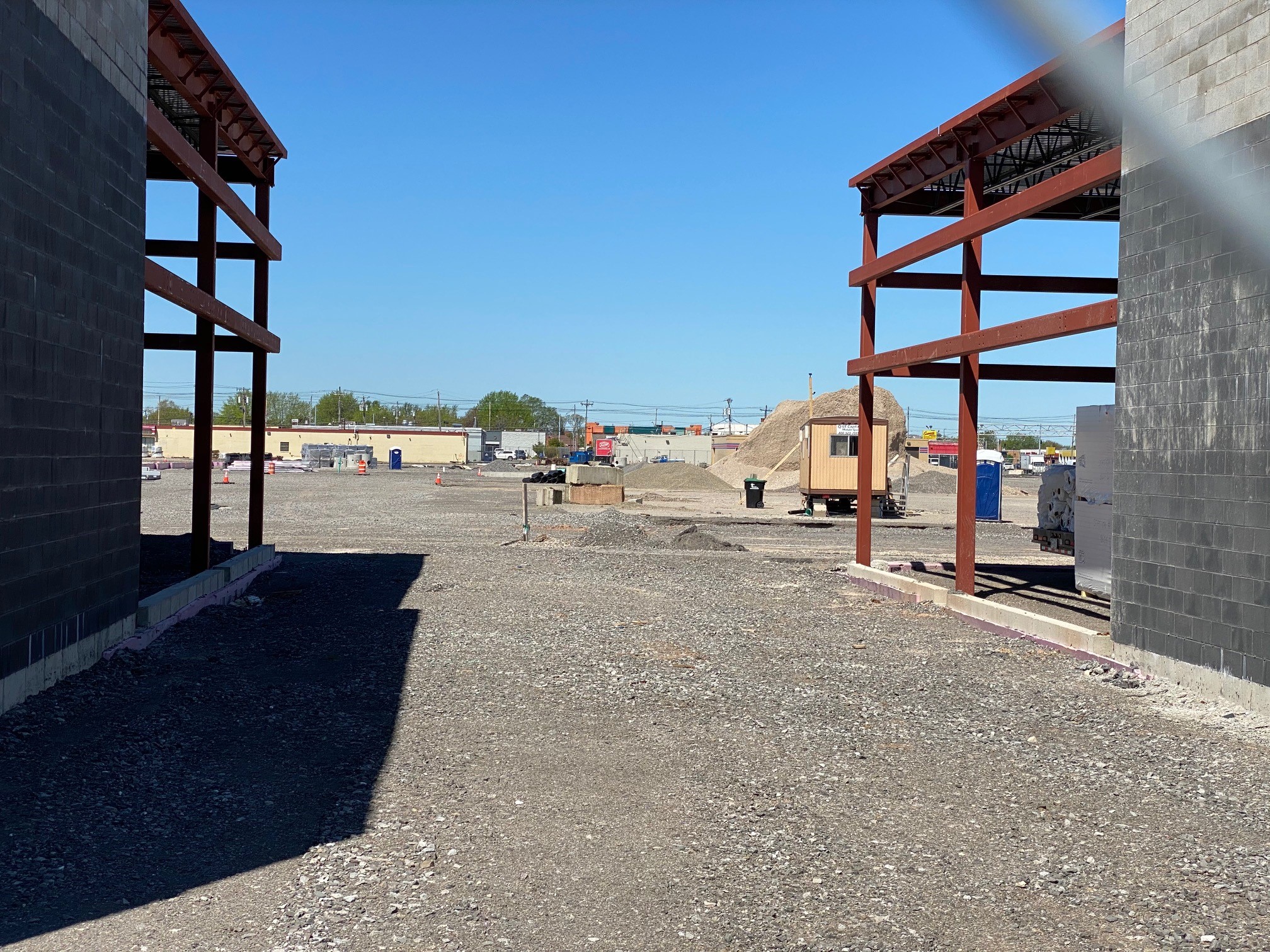 That's how things will remain for now, even though developers can restart construction as long as they show they can follow social-distancing rules on work sites.

"You're going to have the ability to stretch out, and I think meet the social-distancing guidelines," Baynes said. "Hopefully that is something that consumers feel comfortable re-engaging with in the future here."

Sciera insisted Station Twelve intends to see this project through. He said the company has invested a significant sum at the site, although he declined to provide a specific figure.

He offered no timeline for proceeding with the development, saying only that the company would revisit the situation with its tenants in the fall. Asked if he could commit to a 2021 opening, he said he couldn't.

The local coffee chain closed its two Buffalo locations in March and is figuring out how to safely reopen them, but continues to have faith in the Station Twelve concept, partner James Rayburg said.

"We still think it's a great project and imagine that once it's open it will succeed, so we don't intend to pull out," he said.