The first customers got in line a little after 6 this morning, about an hour before Paula's Donuts in the Town of Tonawanda opened its doors for the first time in two months.

Grace Christopher, 8, and her dad, Mike, were waiting to pick up some doughnuts for Grace, her brother, her sister and her mom.

"They just taste really, really good," said Grace, whose favorite is the cinnamon-flavored.

Since Paula's closed over Covid-19 concerns in March, she said glumly, "I had to go without doughnuts."

That drought for fans of Paula's peanut sticks, giant Texas doughnuts and other treats ended at 7 a.m. Thursday, when its stores in Tonawanda, Clarence and West Seneca reopened for takeout.

At the shop on Sheridan Drive in Tonawanda, about 15 customers in masks stood in a line heading east from the store entrance with chalk marks on the sidewalk showing how far apart they should wait.

Lucy Smith of North Tonawanda, a retired surgical technologist at Oishei Children's Hospital, was first in line because the Christophers let her move ahead of them.

"I'm leaving for Nashville in a few hours and hoping to bring some doughnuts to my son and his wife," Smith said.

Her son loves the peanut butter and the cheese varieties. Smith is also a fan but she was taking a pass today.

"I'm not getting anything because I've been sitting around for two months," she said. "When the gym reopens, I'll buy doughnuts."

Just before 7 a.m., the first of the people who had pre-ordered over the phone started showing up to pick up their doughnuts.

Those customers checked in with their phone numbers and waited a few minutes for an employee to bring out bagged boxes of doughnuts to them. 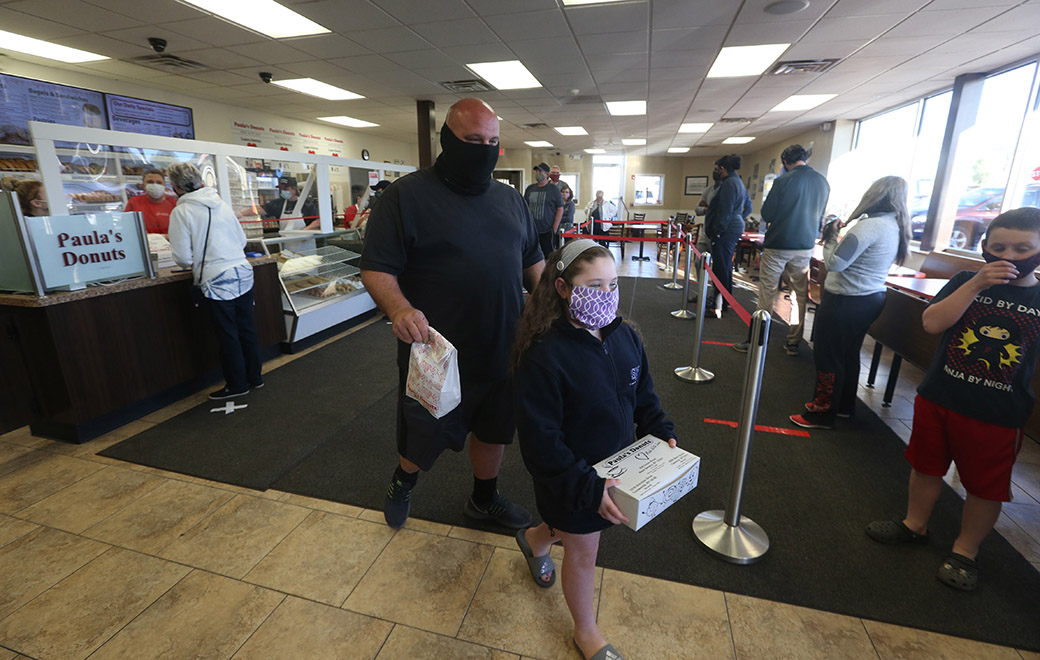 Caitlyn Critharis of Buffalo, who is seven months' pregnant, said she was bringing home a dozen for herself and another dozen for a friend who is also expecting.

"She's due any day," Critharis said.

"They're just delicious. You can't get anything like them in Buffalo," she added.

Asked whether her fandom extends to naming her future daughter Paula, Critharis laughed and said, "Unfortunately, no."

Julie Riley, a general sales manager from the Town of Tonawanda who wore a mask decorated with watermelons, was picking up some doughnuts to share with a neighbor who has helped her family during the Covid-19 pandemic.

Riley said her neighbor has been worrying about his elderly mother's health, too, so Paula's is a pick-me-up for him.

"We're going to have some coffee and some doughnuts on my back patio – safely, of course," she said.

Paula's Donuts is a special place for Alex Rogers, a Kenmore resident.

Asked whether he's a fan of Paula's, Rogers said, "My wife and I had them as our wedding cake, so I guess we are."

It was a Texas doughnut with two Lego figures as the cake topper, Rogers added.

His wife has a compromised immune system and hasn't left their home in two months, he said, so this is "a little sense of normalcy for her."

Inside, Paula's had red tape marked 6 feet apart on the floor for the line for takeout customers.

Lisa Hoppel, daughter of founder Paula Huber, said on Wednesday that 10 people would be allowed in the store at a time – two at the registers and eight waiting in line.

Paula's had a glass shield set up in front of the two registers separating customers from employees. The company also has a new division of labor – the workers who grab the doughnuts for customers don't cash them out, and the cashiers don't touch the doughnuts.

This led to a slightly slower process – especially if people were selecting one doughnut at a time in an order of 12 or 24 – but customers in line seemed to be patiently waiting their turn.

Johnathan Ciolek, was one of two Paula's employees at the door.

"This is my first day," he said, while wearing a red Paula's hat, mask and gloves and an "I'm the nutty one" Paula's T-shirt.

"It seems to be going pretty smoothly," said Ciolek, who had a box of surgical masks on hand in case a customer came to the door without one.

Hoppel said customers wouldn't be allowed into the store without a mask and she hoped people would cooperate for the safety of fellow patrons and Paula's employees.

She said she didn't know how much interest the reopening would draw and she hoped the line wouldn't get too out of control. If it does, she said, it's convenient the Town of Tonawanda police headquarters is just down Sheridan Drive from the shop.

By 7:15 a.m., the takeout line had more than doubled and now was stretched over the next six storefronts in the plaza.

Debbie Kipler, an office manager at a company that makes machinery for pharmaceutical companies, was at the end of the line then. She waited for about five minutes before deciding she'd place an order by phone and pick it up another time.

"I feel like we're starting again," Kipler said. "Getting back to normal."