The Buffalo Bills’ quarterback is a proud Dallas Stars fan, something that people don’t usually go around saying in Western New York.

Growing up in Prosper, Texas, Webb’s family had Stars season tickets. When Webb was just 4 years old, the Stars won the Stanley Cup in, let’s call it “controversial” fashion.

Brett Hull’s “goal” that led the Stars to a series-clinching victory over the Buffalo Sabres is known here in Western New York by two words: “No goal.”

“That’s why I was a little hesitant in doing this interview,” Webb said last week with a laugh. “I don’t wear my Stars stuff in Buffalo. I’ve heard (‘no goal’). Trust me.”

Most often, it’s Bills offensive coordinator Brian Daboll, who grew up in West Seneca, who reminds Webb that Hull was in the crease.

“I’m like, ‘I think they still counted it,’ ” Webb joked. “He pokes at me because he knows I’m a big hockey guy. I’ve been wearing (Stars gear) in our Zoom meetings, so guys can’t poke fun at me too bad.”

That 1999 series sparked a huge interest in hockey in Texas. Webb got caught up in the wave, taking skating lessons at 5 years old and then starting on his first team when he was 6. His father, Matt, was a big hockey fan who passed along his love of the sport.

“We had season tickets up in the top of the stadium in the nose-bleed seats,” Davis Webb said. “We loved it. That’s when the Stars were really rolling. They all these-big time players – Mike Modano, Derian Hatcher, Ed Belfour, Sergei Zubov, Jari Lehtonen, Brett Hull – Hall of Fame players everywhere. They were really taking the city by storm.”

It wasn’t long before Webb showed special skills on the ice. When he was 7, he scored a championship-winning goal for his Junior Stars team with just .5 seconds left on the clock in overtime. He topped 60 goals one year. 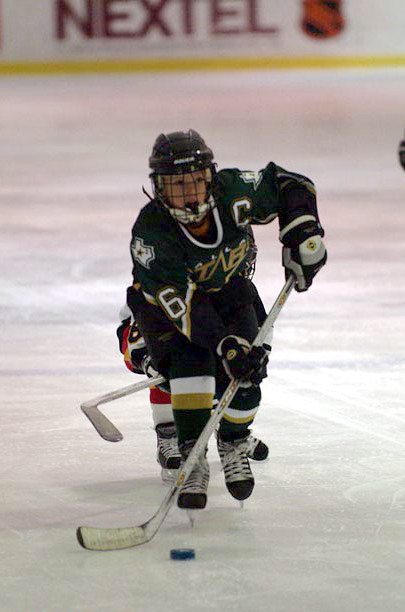 “I think when Mike Modano came down from the Minnesota North Stars – in my opinion, the greatest American-born hockey player ever – everyone started getting involved with youth hockey,” Webb said. “There were a lot of rinks, surprisingly. Right now there are a ton, but growing up there were quite a bit of rinks, too. There were quite a bit of teams. We traveled. When the Stars were rolling, I feel like everybody around here kind of loved the game and got into it.”

Webb played hockey until he was 15. At that point, he faced a decision. To continue his hockey career at a high level, he would have had to follow several of his teammates to traditional hockey hotbeds like Boston or Canada. That would mean being home-schooled far from his native Texas.

“It was either football or hockey,” Webb said. “I chose football, and I think it's worked out OK so far.”

While Webb eventually gave up hockey, his love for the sport remains. Even if he still roots for the Stars, he’s attended several Sabres games since coming to Buffalo.

“I enjoy watching great players and the Sabres have some great ones, with Jack Eichel and Rasmus Dahlin,” Webb said. “I know Lindy Ruff a little bit from when he was down here (in Dallas). We have some mutual friends. I knew the tradition of the Sabres a little bit from him. I think it's a great hockey town.”

Webb didn’t start to play football until seventh grade. The team aspect of each sport stands out to him as a similarity.

“In hockey, if you have not-so-good defensive players, you're not going to be a great goalie, maybe,” he said. “In football, if you don't have the best O-line or receivers, maybe you're not as good of a quarterback as you can be. And it goes vice versa. If you're an average quarterback and you have a great O-line and great receivers, your play gets lifted.

“If you have a great team that's on the same page on the ice – maybe they're not the most talented – but has good awareness of what's going on, smart, tough players, those are the teams that win it. You can see it every year. The injuries that guys play with and the toughness. And the team camaraderie. I think it's very similar in football.”

The decision to give up hockey to pursue football wasn’t an easy one.

“Hockey was my favorite sport my whole life until I played football. To be honest with you, I wasn't very good those first couple years playing football, but I just loved it,” Webb said. “I loved the idea of maybe coaching down the road. I loved the idea of playing quarterback on Friday Night Lights in high school, that whole experience. I wanted to be a Division I quarterback, that became my goal growing up, other than being a professional hockey player. I was like, ‘Man, this is so much fun. I want to follow this out.’ I know I'm going to be tall, and I know I have a good arm. Maybe worst-case scenario I can go somewhere and play college football and be a (graduate assistant) after that and coach, but luckily I continued to get better and I'm still playing.”

Webb started his college career at Texas Tech. He set seven Big 12 freshman records, including 400-yard passing games (four), passing yards in a game (462) and passes completed in a game (45). He played three seasons at Texas Tech, making 14 starts and throwing for 5,557 yards, 46 touchdowns and 22 interceptions.

He transferred to Cal for his final season of college eligibility and was named a semifinalist for the Davey O’Brien National Quarterback Award after starting 12 games and completing 382 of 620 passes (61.6%) for 4,295 yards, 37 touchdowns and 12 interceptions, a passer efficiency rating of 135.63. Following the 2016 college season, he was named MVP of the Senior Bowl after going 11 of 16 for 165 yards and a touchdown to lead the South team to a victory.

That helped propel Webb to the third round of the 2017 NFL draft, where he was selected by the New York Giants. His stay with the Giants was a short one, though, after General Manager Jerry Reese and coach Ben McAdoo were fired. Webb was released before the start of the 2018 season, but he didn’t have to change home stadiums. The Jets signed him to their practice squad, and he was later promoted to the active roster as a backup.

The Jets cut Webb before the start of the 2019 season, meaning he has yet to appear in a regular-season game. He spent all of last year on the Bills’ practice squad.

Webb will face competition for a job this year with the Bills from rookie fifth-round draft pick Jake Fromm. He’s not shying away from it.

“Jake obviously won a lot of games at Georgia. Everybody has talked about it – he's a great teammate, great leader,” said Webb, who added that he’s texted with Fromm since the draft. “We're excited to add him to the room and create some competition, obviously, between all of us. That's going to bring the best out of each and every one of us. The biggest thing is be good teammates to one another and help Josh (Allen) succeed. That's the No. 1 goal, because he is the guy. He's a heck of a player.”

The quarterbacks behind Allen on the Bills’ depth chart have an interesting connection. In 2011, Webb attended the Elite 11 quarterback academy. One of his counselors was current Bills backup quarterback Matt Barkley, who at that point was a junior at Southern California. When Webb was at Cal, he served as an Elite 11 counselor the same year Fromm attended the academy.

“It’s kind of funny that it worked out that way and we’re all on the same team,” Webb said. “It’s an awesome room. Obviously, Josh has done a great job being a leader of the team and a leader of the room and setting the standard every day.

“Just being a part of this organization, the standard that coach (Sean) McDermott and Mr. (Brandon) Beane and the Pegulas have set, it's pretty extraordinary, to be honest with you. Being with two other franchises, they were great as well, but as soon as you walk into the door as a Buffalo Bill, you know the standard that they set each and every day, and they don't waver.”