With phase one of reopening Western New York taking place this week, we have heard more than once that there is finally light at the end of the tunnel.

We have learned to live with and adapt to the novel coronavirus. Part of that adjustment has allowed families the opportunity to spend more time on the water fishing, in the woods turkey hunting, bird watching, hiking and simply being outdoors in the fresh air. It has been a respite from a pandemic like we have never seen in our lifetime. We need that relief.

Morgan Fonzi of Gasport, who was on his way to becoming an electrician, was laid off from Hildreth Electric of Lockport, and it gave him an opportunity to spend more time with his father, Capt. Joe Fonzi of Thumbs Up Charters. Until this week, his operation was considered nonessential in the state and he was unable to operate his charter fishing service for hire.

“It has been awesome fishing with Dad,” Morgan said. “Anytime I can get on the water with him is a good time. It’s always fun spending time with him doing anything outdoors.”

Due to Covid-19, the angling duo was able to spend much more time on the water this spring.

On May 6, they were fishing in the lower Niagara River out of Lewiston, targeting white bass. White bass, sometimes referred to as silver bass, have distinctive longitudinal lines along the side of the fish that closely resemble striped bass. They are usually found in large lakes and reservoirs, such as New York’s Great Lakes. They also have been found in the Kinzua Reservoir and Chautauqua Lake, as well as favorite spots along the Erie Canal, including Oneida Lake and the Mohawk River. They spawn in the spring and the lower Niagara River experiences a significant run every May from Lake Ontario. There are good numbers of “silvers” in Lake Erie, too.

On May 5, the lower river was their best option because of some northeast winds and they started fishing. They caught steelhead, lake trout, smallmouth bass and then started catching white bass. They ended up with 25 fish over 13 1/2 inches long with the biggest being 3 pounds, 10 ounces. They were not thinking of any state record. They were thinking that these were going to be food for a friend during this tough time.

As they focused on white bass the next day, Morgan caught a couple of bigger white bass using a 5/8-ounce Steelshad blade bait in a gold color.

“I caught the bigger fish the day before on Steelshad blade bait,” Capt. Joe said. “I convinced Morgan to switch over from minnows. We were working a back eddy along a ledge that dropped from 13 to 18 feet. We bounced the blade up and down the ledge.” 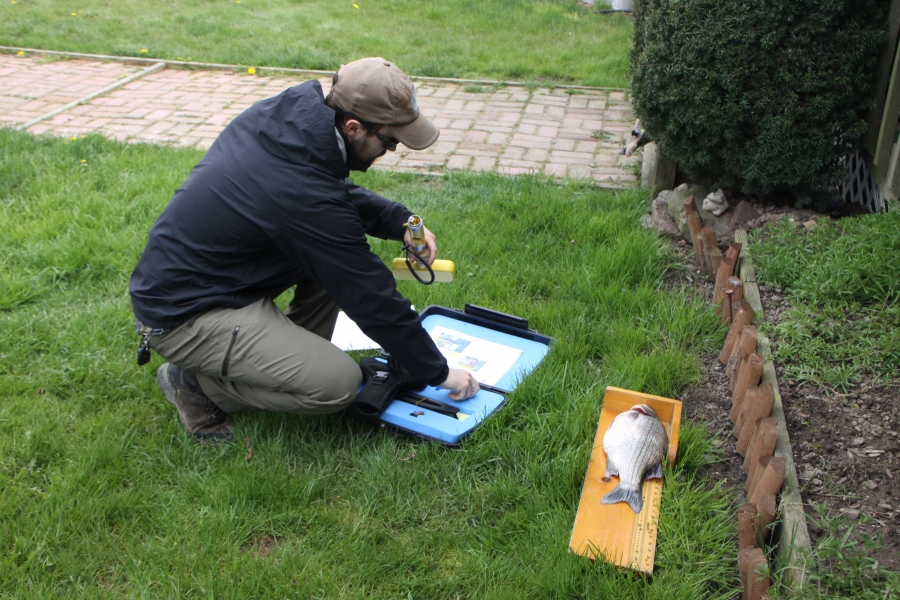 The fish was caught at around 3:30 p.m. on a Cabela’s Walleye Prodigy rod with a Shimano spinning reel that had Seaguar 10-pound fluorocarbon leader and Seaguar Smackdown Braided line. It was around that time that Joe suggested to Morgan that he look up the state record on his smartphone. The record was a 3-pound, 6-ounce fish caught by Robert Hilton from Furnace Brook in Westchester County, a tributary of the Hudson River, in 1992. It was 18 1/2 inches long.

“I always thought the record was over 4 pounds,” said Capt. Joe. “We’ve probably broken that a few times through the years. I broke it the day before. I’m glad it was Morgan who caught the eventual record, though.”

Because it was later in the day, they eventually decided to try Tops near their home in Gasport for an official weight because Morgan knew the manager as a former employee. They weighed two fish, knowing that they had to beat the current record by 2 ounces. One came in at 3.46 pounds on a digital scale, just under the required 2 ounces. The second hit the mark perfectly at 3.50 pounds, exactly 3 pounds, 8 ounces.

They had more work to do. They had to verify the species with a Department of Environmental Conservation’s Region 9 fisheries biologist out of Buffalo. Chris Driscoll got the call the next day and he came out to make sure it was a white bass, measure the fish and make sure there were no foreign metal objects in the fish. The length of the fish was 18 3/16 inches.

White bass sometimes are confused with hybrid striped bass. Hybrid striped bass are stocked in several states around the United States. However, they have not been found in the lower Great Lakes. Driscoll still needed to make it official, checking the tooth patches in the back of the tongue. Hybrid and striped bass have two patches; white bass have one. It was a white bass.

After downloading the application form off the DEC website (www.dec.ny.gov), filling it out and having it notarized, they shipped it to Albany. In the matter of a couple days, Morgan received official word that it was, in fact, a record catch.

“I was relieved when I finally received the verification,” Morgan said. “You want to make sure you fill out all the paperwork right and with that little bit of wait time, you never know. It’s pretty cool to have a state record catch, especially since I was able to catch it with my dad.” 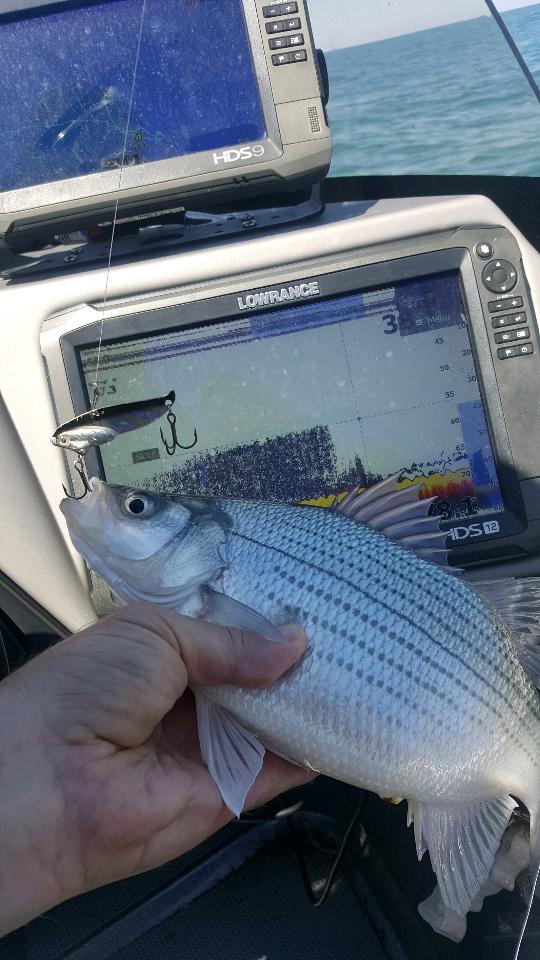 Capt. Joe Fonzi of Gasport caught this white bass while walleye fishing in Lake Erie and shows how they look on his electronics. (Photo courtesy Capt. Joe Fonzi)

“We would not have caught it if it weren’t for the pandemic,” Joe said. “With both of us being out of work, we have gotten to fish together quite a bit. I always assumed the record to be larger. It's funny, Morgan pulled records up the other night and I knew almost every single one within about 5 percent of their weights as far as what I called the relevant ones.”

There are lessons to be learned from white bass, too. Capt. Joe, a regular speaker at Cabela’s and the Greater Niagara Fishing Expo, always uses white bass to locate open water walleyes.

“They are always together (white bass and walleye),” he said. “I teach this at my seminars. When I catch or find white bass, I know that walleyes are near. The white bass will look like a kid’s drawing of flying birds on my electronics on the boat. Look for white bass within 5 feet of the bottom, always on bait. Of course, the walleyes want the bait, too. Normally, the walleyes will be just below them or, during peak feeding times, mixed right in. I have seen smaller 6- to 7-inch silvers in the bellies of large walleyes more than a few times. White bass prefer emerald shiners and smelt.”

Resident fishing licenses are up considerably over this time last year, according to the DEC. More families are spending time together, enjoying our natural resources through activities like fishing.

You may even be the next one to catch a record fish. Make sure you know what the records are before you go.