The WNY region has seen phase one for reopening businesses, and charter fishermen began running their operations Tuesday. That is great news for anglers interested in taking advantage of some particularly good spring fishing on a charter boat.

Smallmouth bass were snapping on Tuesday when Capt. Jim Hanley of Angola took out his first client of the year after charters were reopened. They used 1/8-ounce goby-colored Ned rigs in 28 to 32 feet of water just outside the Buffalo Harbor. The better walleye bite has been at night trolling stickbaits in 15 to 30 feet of water. In Dunkirk, Gerri Begier with Bill’s Hooks reported that they reopened with the charter kickoff Tuesday. Her son, Capt. Pete, has been taking his son off the Sherwood Country Club near Van Buren Reef and doing well at night with sticks in 8 to 15 feet of water. That does not mean you cannot catch them during the day, though. Capt. Joe Fonzi of Gasport hit some favorite spots in Lake Erie and caught walleyes in 15 feet to 70 feet of water. All the fish were caught on blade baits, Snap Raps, and hair jigs. In the tributaries, smallmouth bass are cooperating in streams. Speaking of Lake Erie, you will want to attend the virtual Lake Erie meeting hosted by DEC and NY Sea Grant on Thursday starting at 7 p.m. This includes information on the Upper Niagara River. In addition to presentations by the Lake Erie Unit on the lake and the tributaries, there will be a presentation on barotrauma on yellow perch. Check out the DEC website at dec.ny.gov for more info on the 7 p.m. virtual meeting. Some good news on Sturgeon Point. Read Scattershots this week. 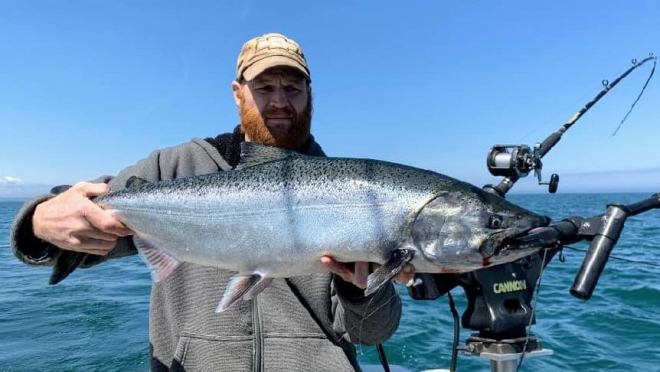 Wade Rowcliffe of Rochester was fishing out of Point Breeze in Orleans County this weekend and caught this powerful king salmon. (Photo courtesy Wade Rowcliffe)

Fish are snapping above and below Niagara Falls. In the lower river, shore casters like Mike Rzucidlo and Mike Ziehm of Niagara Falls had a bonanza on lake trout, white (silver) bass and a few other species casting spinners and jigs in the gorge area. In boats, steelhead, lake trout and smallmouth bass will dominate the catching, depending on where you fish and what you use for bait. Wind direction can dictate which bait you should use. If the wind is out of the southwest, throw on a MagLip or a Kwikfish on a 3-way rig and let the current and wind do the work for you. If it is a northerly breeze, try using a minnow off a three-way rig for trout. You must use an artificial bait for bass and the best offerings have been tubes, swim baits and ned rigs. In the upper Niagara River, smallmouth bass fishing continues to be good in numerous locations from both boat and shore. Ned rigs are hot. Fishing the foot of Ferry Street at night is producing walleyes. 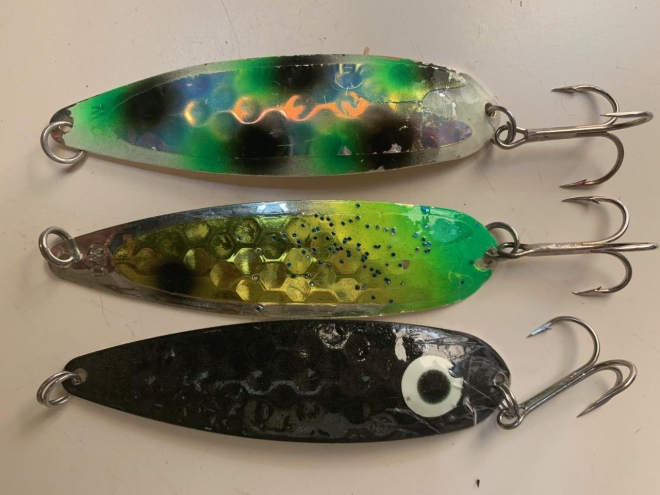 Capt. Bob Songin of Reel Excitement Charters reports that fishing is as good as it gets in front Wilson. There are plenty of kings from 80 to 140 feet of water. Magnum spoons have been the best, such as DW Carbon-14 super glow, white two face and a UV green skirt. Fish are anywhere from 30 to 70 feet down on the downriggers; ten color lead core lines on the boards, and divers at a number 2 setting out from 80 to 120 feet behind the boat. Jim DeGirolamo of Derby fished out of Wilson over the weekend and did very well in 72 to 80 feet of water east of Wilson between ports off the Red Barn. It was a spoon bite for kings, 30 to 50 feet down. Capt. Joe Oakes was running out of Olcott to report that fishing was red hot with kings and lake trout being caught in 60 to 170 feet of water from Wilson to the power plant east of Olcott. He has been running stickbaits, spoons and flasher-fly combos in the top 100 feet of water depending on his location. Scott Feltrinelli of Ontario Fly Outfitters reports that most tributaries are low and clear for the most part. He had some great streamer fishing for bass in some Orleans and Monroe county streams. Brown and olive woolly buggers worked well.

Walleyes are hitting along weed edges in 8½ feet of water. The key is to keep your speed under 1 mph according to Capt. Frank Schoenacker of Infinity Charters. They have been using light spinning gear, providing a bit more sport. When the weather comes around this week, we should see great fishing on the lake. Caden Lardo had quite a Saturday while fishing with his grandpa, Ron McCauley of Ashville, Caden’s Dad, and his brother, Kyle. Caden caught his first walleye and brought a 38-inch musky to the boat for a quick release. He used a worm harness in 8½ feet of water in the North Basin of the lake. They were fishing with Schoenacker (McCauley’s neighbor), who reports that 'eyes are hitting in the South Basin during the daytime along the weed edges, too. May 30 is the inland opener for muskellunge for New York. Chautauqua will be a good bet to give it a try. Take note that this opener does not include the Great Lakes. That season opens June 20. 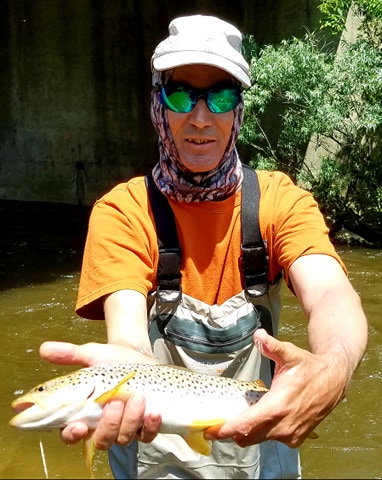 Scott Feltrinelli of Ontario Fly Outfitters reports that he found some inland streams like Oatka Creek to be high and muddy after recent rains. Just prior to the rain, he caught some nice browns in the catch-and-release section of Oatka. He passed along some sad news, reporting that Steve Marquis of Java died last weekend after a tough battle with cancer. Marquis was a longtime friend of the Western New York fly fishing community, always willing to share his knowledge about the inland fisheries, but especially the upper Cattaraugus Creek area. He will be missed.