On a typical Saturday, as many as 100 customers would come through the doors of the TreeHouse toy store in the Elmwood Village.

Last Saturday, the store took in just eight orders by phone and online, said Gaetana Schueckler, who owns the shop with her husband, David.

That was a low point in a difficult two-month stretch after the state shut down most retail operations to limit the spread of Covid-19, she said.

But Gaetana Schueckler said she was thrilled to see a news alert Monday that the region now was eligible to start reopening Tuesday, with curbside pickup and delivery retail sales. Several orders came in Monday night after the announcement.

"That gives us a spring in our step," she said.

Many local retailers have been preparing for this day and the return of in-person shopping, whenever that is allowed.

The restrictions imposed two months ago left many owners confused and led to a patchwork of shuttered stores, stores open for business as usual and others struggling to find some way to serve their customers.

Stores considered essential, such as Walmart and Target, which sell groceries, were allowed to remain open.

Non-essential retailers only could stay open with one employee inside the store at a time to serve orders submitted online or over the phone. It wasn't clear whether customers could pick up their items at the curb, though some stores allowed this.

"The stores have a lot ahead of them," said Judy Porto-Fiorella, president of the Hertel Business Association. She cited the additional spending on protective equipment and cleaning supplies and the fear that people who lost the habit of in-person shopping won't come back when that's allowed. 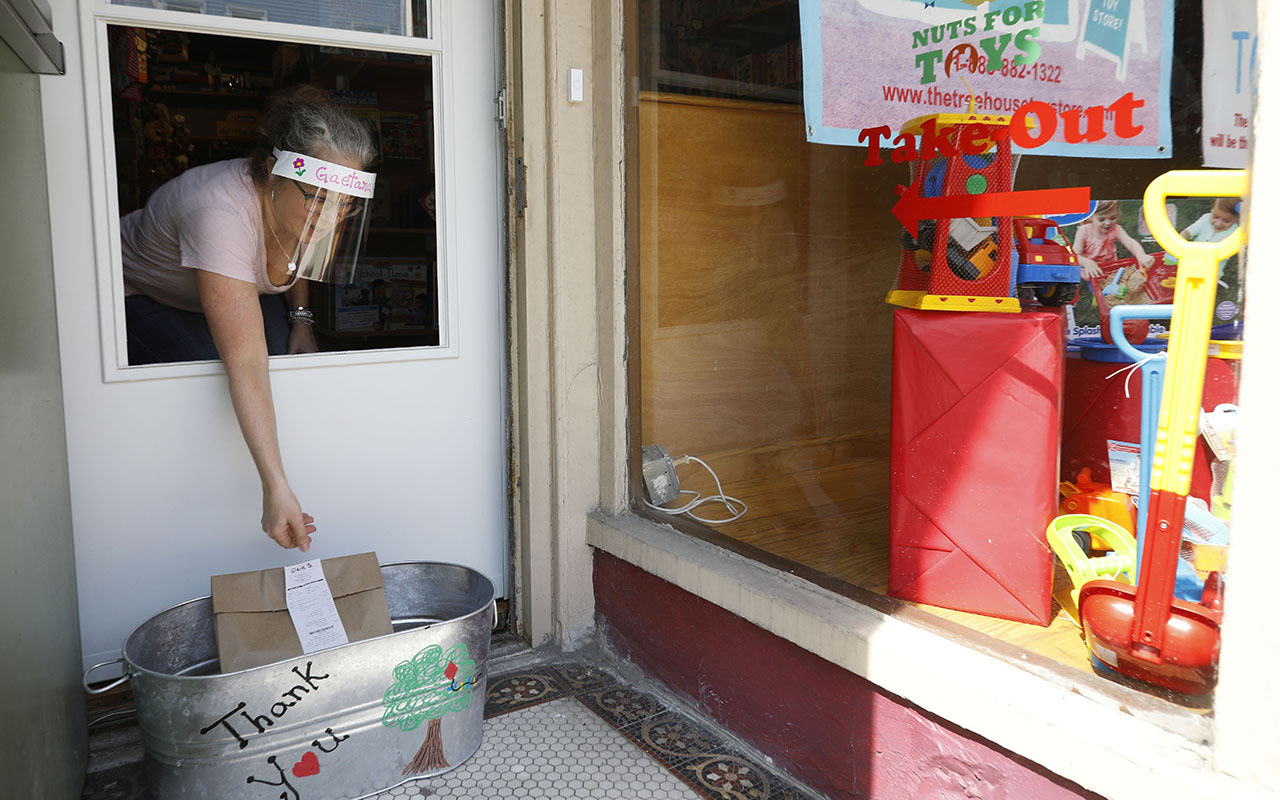 Treehouse Toy Store co-owner Gaetana Schueckler places a customer's order in the takeout bin outside the store's new side door, Tuesday, May 19, 2020. They have been selling toys for delivery online and over the phone but can now do pickup orders using the side door. (Derek Gee/Buffalo News)

The new coronavirus has battered TreeHouse's business in numerous ways.

Customers can't walk by the shop on Elmwood Avenue and pop in for an impulse purchase. Children aren't having birthday parties with large groups of friends and relatives.

The TreeHouse temporarily laid off its four employees, with the Schuecklers working six days a week.

The store has contracted with a local delivery service to drop off orders the next day at customers' homes. This worked well, at least at first, with a wave of orders from concerned loyal customers.

Buffalo Niagara's economy is falling fast – and businesses are scrambling

But it also coincided with a period when Amazon was discouraging customers from ordering nonessential goods, such as toys, Gaetana Schueckler said.

When Amazon returned to its normal delivery times, she said she noticed a sharp decline in orders.

Another frustration for the Schuecklers is the loss of their ability to personally connect with customers. Gaetana Schueckler has tried to make up for this with frequent posts on the store's Facebook page.

David Schueckler recently installed an access window on the Auburn Avenue side of the business where customers can pick up their phone or online orders. 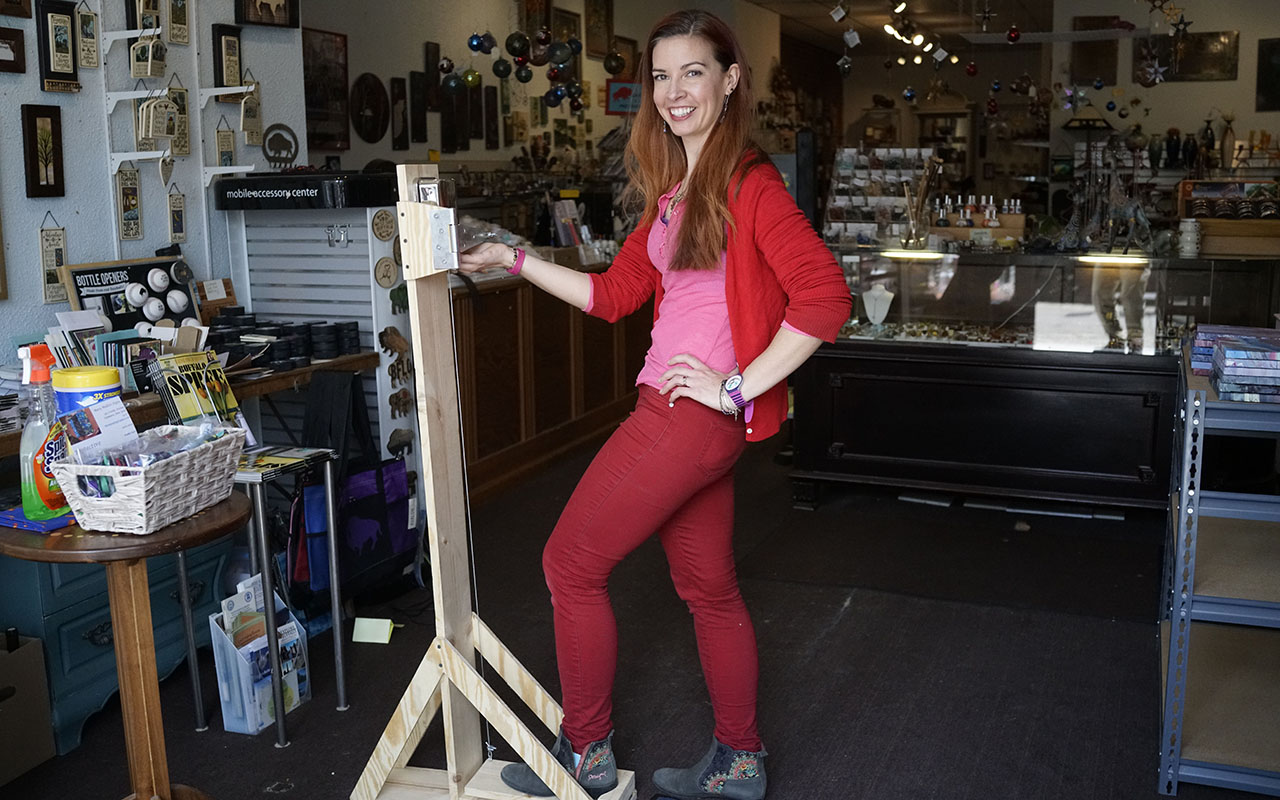 Therese Deutschlander, owner of Thin Ice, demonstrates the new foot-powered hand sanitizer dispenser her husband made for her shop as it prepares to accept in-store pickup of online and phone orders. (Derek Gee/Buffalo News)

Just down the street on Elmwood, Therese Deutschlander's Thin Ice boutique sells a mix of jewelry, apparel, art works and other items.

She said her three part-time employees are not working, but she's kept the shop going herself. If customers passing by saw something in the window that caught their eye, Deutschlander said she would bring the items outside and take down their credit card information.

"I never slowed down at all," she said, although sales cratered.

The Bookworm, a new and used bookstore in East Aurora, continued fulfilling email and phone orders with shipping and curbside pickup handled by one worker at a time, said store manager Jennifer Reisdorf.

"The lack of foot traffic was our biggest loss," Reisdorf said. "People need to browse in our store."

Joe Loveric, owner of the Collector's Inn in Kenmore, also seeks a boost in sales. The comic book and gaming store largely shut down from mid-March until last week, when Loveric began offering limited curbside pickup.

He already is looking ahead to the future return of in-store shopping.

He plans to create more room for social distancing and, he said, the popular gaming nights for fans of Magic: The Gathering and Dungeons and Dragons won't return any time soon.

Collector's Inn doesn't sell essential items but, Loveric said, "I do offer diversions, which we need as a society."