Bob Confer is eager for his company to get back to making a bigger splash in manufacturing.

Confer Plastics in North Tonawanda got the green light to start making pool steps and ladders again. The swimming pool industry accounts for 55% to 60% of the company's business, said Confer, the president.

"The backlog for those products is pretty significant," Confer said. "Right now, we're looking at about six to seven weeks of production in order to get caught up.

"And then there's likely increases as we head into the season," he said. "And that's a nice outcome of the stay-at-home orders and staycations and people wanting to invest in their backyards."

Until now, Confer Plastics had been limited to making products classified as essential. But manufacturers in Western New York received approval to resume regular operations under phase one of reopening that began Tuesday.

As manufacturers get back into full swing, they are doing so in a changed setting. They are revamping their workplaces to keep workers separated, and using other safety precautions. They are also taking stock of customer demand in an economy ravaged by Covid-19.

And there are longer-term questions about the size of manufacturers' work forces and how much they will commit to innovation, amid the economic pressures they are under. 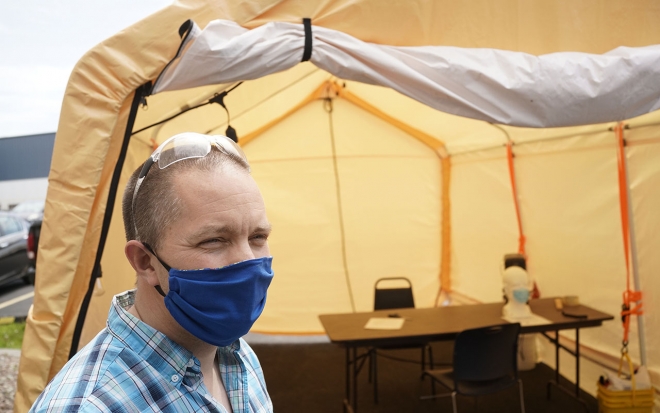 Bob Confer, president of Confer Plastics in North Tonawanda, stands in a tent used to do a health evaluation of each employee at the beginning of each shift. (Derek Gee/Buffalo News)

Manufacturing remains a key sector locally. As of March, before widespread shutdowns and disruptions hit, the region had 52,100 manufacturing jobs, according to the state Department of Labor. April figures were not yet available.

"In most cases, we have at least 10 to 15 feet of space between every employee, or we'll put up physical barriers or we'll wear proper" personal protection equipment, Coleman said. "Our industry is ready for it and we'll meet the guidelines."

If the adjustments manufacturers make impede their productivity, Rand believes companies can make up for that over time. The question they face, he said, is whether the workplace changes turn out to be stopgap measures or more permanent changes to how they operate.

And now that manufacturing is reopening in the region, how much demand is there for what they make?

General Motors restarted most of its U.S. factories this week and is gradually ramping up employment inside them.

Ideally, all of GM's facilities will be operating at their original capacity by about mid-July, said Philip Kienle, GM's vice president of manufacturing. But he offered a caveat: "We're not going to override market demand."

Certain industries, such as aviation, have been hit hard by Covid-19, with so few people flying. Some companies that supply that industry have felt the ripple effect and cut staff. And it's difficult to say when that industry might recover.

A Buffalo Niagara Partnership survey conducted in late April found 56% of local manufacturers who responded had reduced their staff in light of Covid-19. Of those who made reductions, 77% described the reductions as temporary layoffs. The question now is how soon manufacturers will bring back those workers.

That same survey found 62% of manufacturers had postponed investment decisions, including 29% who were doing so indefinitely.

What will manufacturers' mindset mean for their commitment to innovation?

Buffalo Manufacturing Works last fall moved into a new center at the Northland complex, with staff and equipment to help manufacturers to innovate.

Buffalo Manufacturing Works is continuing to work with client companies digitally, said Henry J. Cialone, president and CEO of EWI, the nonprofit that operates the center. But client access to the center itself is limited for now.

Cialone believes manufacturers, especially those that operate within the supply chain, will be open to innovating. He compares the experience to the Great Recession, when some suppliers to the auto industry looked at diversifying into supplying the aviation industry.

"The skills they had could be adapted, but they needed advice on how to do that," he said.

Cialone sees a couple of trends emerging for manufacturers. There will be intense competition to supply reduced demand for some engineered products, he said. And manufacturers will take a hard look at their own suppliers, perhaps deciding to pull back some of that work from overseas sources to avoid disruptions.

At Confer Plastics, the company plans to bring back 20 more workers every two weeks, giving the company time to "build a culture" around Covid-19 controls, Confer said. He has even promoted an employee to serve as Covid-19 administrator.

"This virus and the government responses are changing so much, so often, we want to be able to handle whatever might come our way and ensure the safety of everyone," he said.