It took the first pandemic in a century to make drive-in theaters – those hulking, dinosaur-sized screen towers on blacktopped fields that reached their peak in the 1950s – suddenly relevant again.

"Ozoners," as they were called, reached a peak of 4,063 theaters in 1958. While still popular in pockets of the country, including Western New York, a 92% drop-off has occurred since then. There were 305 drive-ins in the country as of October 2019, according to the United Drive-In Theatre Owners Association.

But Covid-19 has suddenly thrust drive-ins into the spotlight again as an entertainment antidote to the coronavirus. Numerous national articles have heralded their return, and Gov. Andrew Cuomo suggested they were an ideal amusement at one of his daily briefings in April.

"Where is the public safety issue?" Cuomo asked. "It's a drive-in theater. You're in the car with the same people."

The Transit Drive-In reopened in Lockport on May 15, selling out all five screens Friday and Saturday. Because of social distancing, the theater only allowed 50% capacity to ensure up to 12 feet between cars and to limit the number of people using the snack bar and bathrooms. It's one of several social distancing measures theater owner Rick Cohen instituted that he and his staff of 30 took pains to enforce.

Cohen has decided, for now, not to show double features, despite losing valuable revenue from the refreshment stand between pictures. He's doing so principally to reduce the need for people to use the restrooms, which are disinfected after every use. 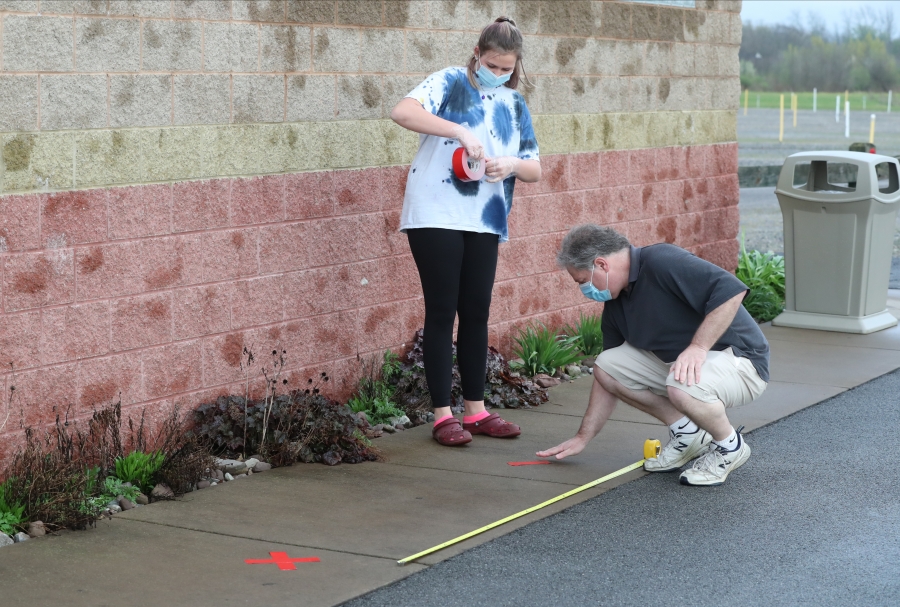 "There is definitely a spotlight on drive-ins right now because we are able to be open as an entertainment option and practice social distancing," said Rick Cohen, 52, a third-generation drive-in owner. "It was certainly not by design – no one planned for this to happen, nor was it anything I was looking forward to.

"But it's an opportunity to serve the community during a difficult time, and I'm just trying to operate the drive-in as safely as I can," Cohen said. "It is driving more attention, and drive-ins are going to be sought after from people who might not have even been aware there were drive-ins previously."

The need for social distancing has also made the Transit sought after for other public events besides movies. There has been a church service. Four weddings are planned, and 40 school graduations have been booked, including the University at Buffalo medical school. And even they can't resist watching a movie on the giant screen. Most of the graduations, Cohen said, have chosen to include a movie afterward. On the horizon: the possibility of concerts.

For drive-in fans, there's nothing quite like watching movies outdoors with the stars overhead, while enjoying fountain sodas, popcorn, candy and ice cream at prices that, far from indoor movie theaters, seem frozen in the 1980s.

"I come like 20 times a year. I'm always here," Emily Neidrauer said on opening night, as slowed tires could be heard nearby kicking up gravel before turning to park. "I like being in my own personal space and not being next to a stranger and being outside, and the big screens are great."

Her friend Lauren Smith said she liked to go there and hang out with friends while also being swept up by nostalgic feelings.

"The drive-in is like a childhood memory for me," Smith said.

Suzanne Musleh said the drive-in is a great place to bring the kids. Covid-19 safety concerns prevented them from playing on the playground located, along with a miniature golf course, at the foot of screen one's colossal 98-feet-tall-by-60-feet-wide screen tower visible from Transit Road.

"I'm hear with them for every movie. They can jump and play and scream as much as they want, and nobody's going to say anything to you," Musleh said. "It's a community, and I love the giant screens."

Cohen takes pride in the film's presentation, the landscaping around the theater, the new refreshment stand and clean restrooms. He has spent close to $3 million since 2012 on upgrades.

This year brings the debut of a $225,000 laser projector for screen one. 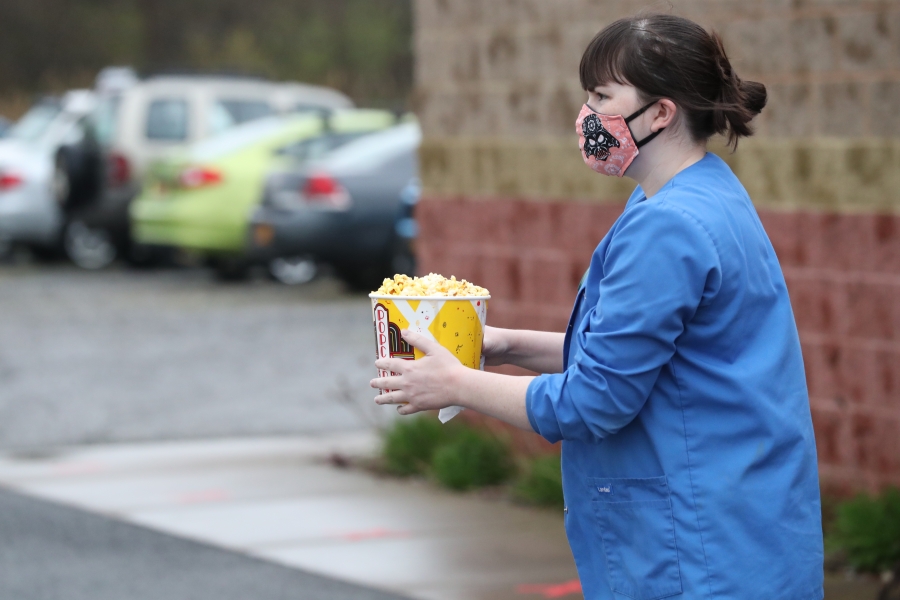 At the Transit Drive-In, customers are asked to wear face masks and adhere to social distance guidelines when leaving their car as Caitlyn Mourgas of North Tonawanda did when she visited the snack bar. (James P. McCoy/Buffalo News)

Changes made to reduce contact and chances of spreading the coronavirus went "smoothly" opening weekend, Cohen said, except that many who sat in lawn chairs failed to follow instructions and wear their face masks.

So Cohen said he is prohibiting lawn chairs until further notice.

"My staff shouldn't have to be the masked police, but if we're going to be allowed to operate these are the conditions we have to operate under," he said.

It's possible some restrictions could be eased in the weeks and months to come, depending on the progress of the disease and local and state guidelines, Cohen said.

The first drive-in opened in 1933 in Camden, N.J., but their popularity grew with the rise of post-World War II car culture. New York State had 148 drive-ins in 1963. Today that number is 28, which ties Pennsylvania for the most theaters, although the Empire State has four more screens.

Like the Transit, the Silver Lake Twin Drive-In in Perry, in Wyoming County,  opened May 15. Theater phone messages and Facebook pages for the Sunset Drive-in in Middleport, in Niagara County, and the Delevan Drive-In in Delevan, in Cattaraugus County, still highlight the 2019 season and give no information about 2020. 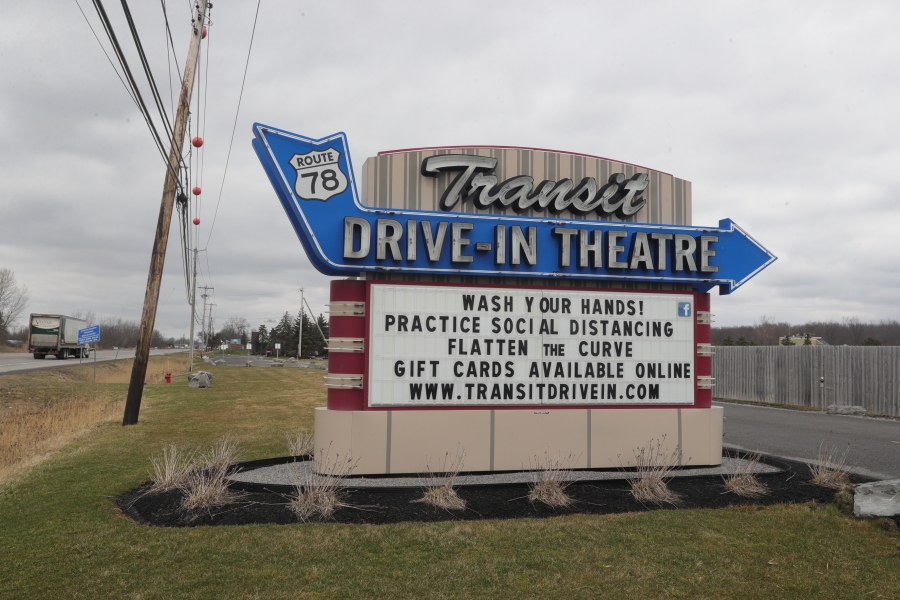 The Transit Drive-In is at 6655 S. Transit Road, Lockport. For movie titles and other information, call 625-8535, visit
transitdrivein.com or Facebook.
Gates currently open at 6 p.m. Friday, 7 p.m. Saturday and 8 p.m. Sunday through Thursday. Admission is $10 for ages 12 and older; $6 for ages 5 to 11; free for ages 4 and younger.
Here are new policies to safeguard patrons and workers.

Patrons must remain inside or near their vehicles except for bathroom breaks, snack bar visits, smoking area, or to walk your dog. All guests must wear a face mask outside of their vehicles and adhere to social-distancing guidelines.

Tickets: All tickets will be sold through online pre-sale only. Purchase tickets for everyone in your vehicle in the same transaction. Refunds will not be issued.

Parking: Parking spots are designated by theater attendants. Vehicles must be parked at least 6 feet apart. Sitting outside on lawn chairs or the back of a pick-up is permissible if individuals are 6 feet apart.

Snack bar: The lobby has a 10-person limit, with a line outside spaced at least 6 feet apart.

Restrooms:  One person at a time unless an adult is accompanying a child. Attendants are sanitizing with hospital-grade disinfectant between uses.

Smoking/vaping: Only allowed in designated smoking areas along the outside perimeter of the parking area.