Doctors warned Ted Siwy’s family in mid-April that he probably wouldn’t survive his battle with Covid-19.

Despite being on a ventilator, he wasn’t getting enough oxygen, and his organs were shutting down.

“They told us to say goodbye,” said his son Tyler.

But, on Monday, it was Ted Siwy saying goodbye to the Catholic Health Covid-19 Treatment Facility at St. Joseph Campus, where he spent the past seven weeks – including 38 days on a ventilator.

Siwy, 57, wept and waved to family and friends as he was wheeled outside the hospital on a gurney. Several of them made signs of encouragement. A niece played the “Rocky” movie theme song from her smartphone.

“It’s a miracle that he survived this,” said his wife of 30 years, Marian. “He has a lot of faith in God, and I think that’s what pulled him through, and all the prayers from so many people praying for him.”

Siwy isn’t completely out of the woods yet.

He has weeks – and maybe months – of rehabilitation and therapy ahead of him at an Orchard Park nursing facility, where he again won't be able to visit with his wife and three sons. His family said they were grateful he regained normal function in his organs and did not suffer brain damage in the ordeal. 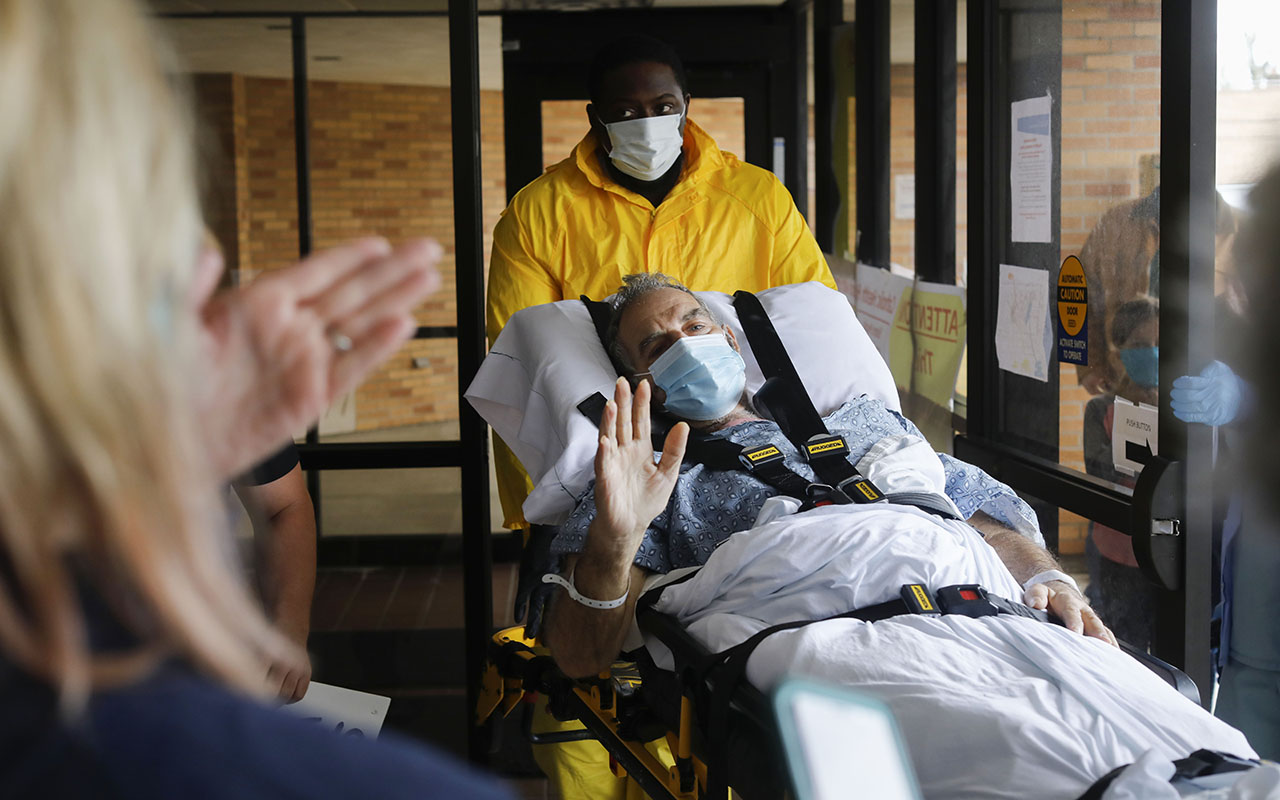 Covid-19 patient Ted Siwy, who was admitted to the hospital on March 29, waves as he is greeted by his family as he is officially released from treatment at St. Joseph Campus, Monday, May 18, 2020. (Derek Gee/Buffalo News)

Siwy, who lives in West Seneca, first became ill sometime in mid-March and went about a week later to Mercy Hospital, where he tested positive for Covid-19.

After an overnight stay, he was released to self-quarantine at home, said Marian Siwy.

His condition worsened over the next few days, and his wife took him back to Mercy.

“He was gasping for air. He had the dry cough, fever up and down, delusional,” said Tyler Siwy.

Mercy immediately took him by ambulance to the Covid-19-only hospital at St. Joseph, and he was put into a coma and onto a ventilator on March 31, according to his family.

Siwy works as a sales representative for a Rochester-based electronics distributor.

He’s known in Western New York for his work as an Elvis impersonator and singer with the band “Swift Kick.”

“He’s concerned that he’s never going to sing again, but hopefully he’ll get his voice strong enough where he will be able to sing again,” said Marian Siwy. 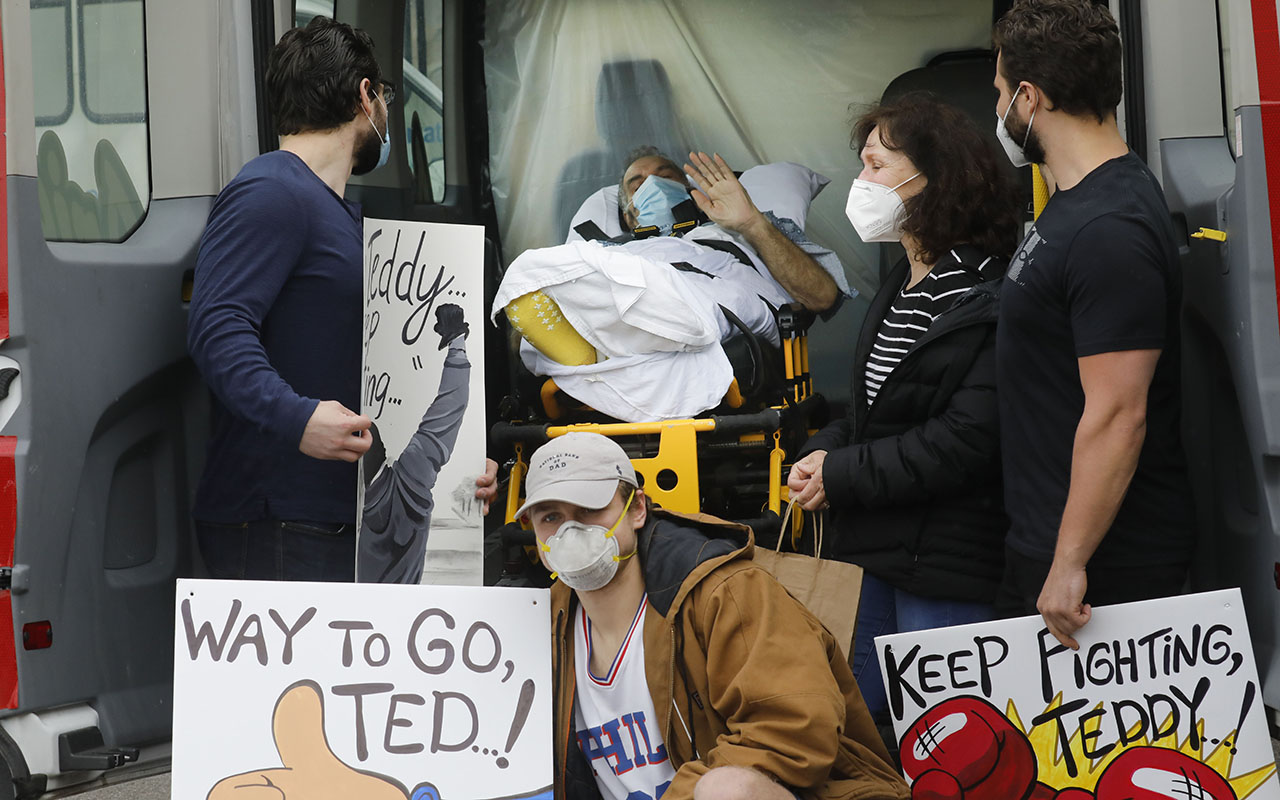 Covid-19 patient Ted Siwy, who was admitted to the hospital on March 29, is greeted by his family, including his wife Marian and their sons, from left, Brandon, Dylan and Tyler, as he is officially released from treatment at St. Joseph Campus, Monday, May 18, 2020. (Derek Gee/Buffalo News)

His wife said he had no prior conditions that would have made him more susceptible to the novel coronavirus, aside from a bout with pneumonia in December.

“Other than that, he was really active, worked out pretty much every day. I mean he was in great shape for being 58 this June,” said Tyler Siwy.

The virus led to multiple complications, including an E. coli infection and a MRSA staph infection, and his family said he needed a tracheotomy, a feeding tube in his stomach and an emergency procedure to repair a perforated colon, according to family.

At one point, doctors prescribed hydroxychloroquine, an experimental drug commonly used to treat lupus, along with zinc and the antibiotic azithromycin, family members said.

“We’re pretty sure it saved him,” said Tyler Siwy. “It didn’t beat it, but it gave him four days of his lung function going up, instead of backwards.”

After Ted Siwy was hospitalized, the entire Siwy household, which includes Tyler and two other sons, Brandon and Dylan, tested positive for the Covid-19 antibodies.

Brandon said he recalled having a “weird fever and chills” in March, and Tyler said he lost his sense of smell for a few days.

“We all caught the virus. We don’t know when, but we all have the antibodies now,” said Tyler Siwy.