On this damp, breezy and cool Monday I’m sitting at the keyboard wearing a hoodie and sweatpants. That has been a standard outfit for many of us most of this spring. But I am confident we’ll all begin shedding layers later in the week.

So far, much of May has been disappointing. You may be surprised to learn rainfall has been below average despite Sunday night’s steady rain. But temperatures have been below average as well, by -7.4 degrees in the mean. That is a large anomaly; a big chill. As I’ve written in previous articles, however, a warmer second half of the month is likely. You wouldn’t know it on Monday, true enough, when temps struggle to reach 60 with a brisk east breeze. The average high at this time of the year is in the upper 60s. We’ll be reaching that threshold quickly enough on a breezy Tuesday, even though clouds will be slow to thin as depicted in modeled cloud cover during the early afternoon.

By Wednesday, more abundant sunshine returns, and winds will veer to the southeast, allowing a modest downslope flow to develop and boosting the high to near 70. In case you didn’t notice, we’ve had only two days this year with a reading reaching or cracking 70. That was on March 29 when we hit 74, with a repeat 74 this past Friday. Yes, it’s unusual to be so late in the season with so few warm days over 70. All that changes this week, with readings on the rise. These are the American GFS modeled afternoon temps on Thursday: 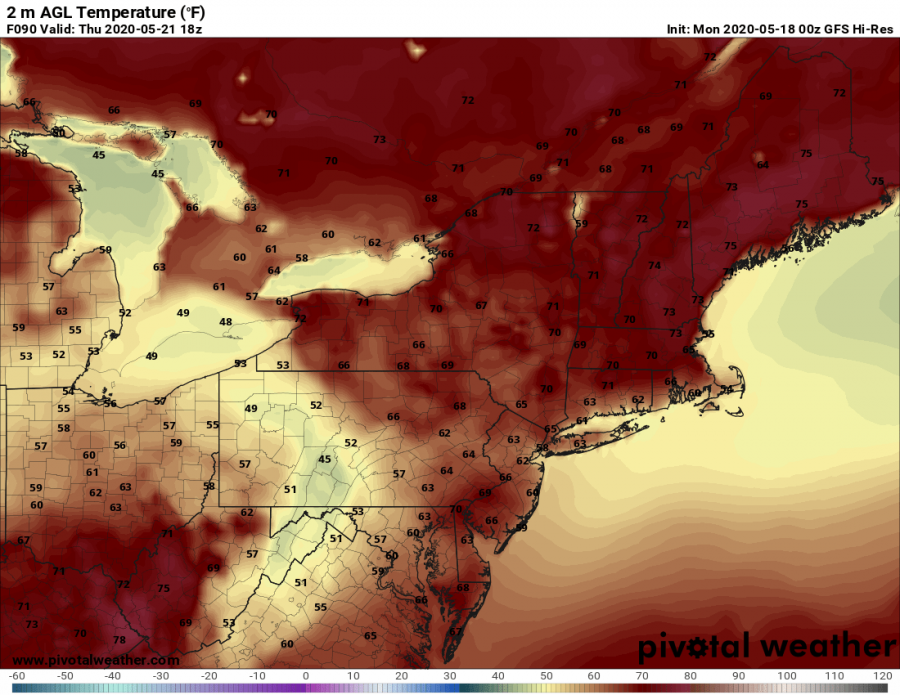 We go up from there, albeit slowly. More low 70s return on Friday with more cloud cover and a few possible brief, light showers. On Saturday, we may gain a degree or two with partial sunshine, edging closer to 75, and into the mid-upper 70s on Sunday. The weekend days appear mostly dry, with light wind allowing it to feel even warmer. A few spotty light showers can’t be ruled out on Sunday. The warmth doesn’t end on Sunday, either. This is European/ECMWF modeled warming for next Monday, which just happens to be Memorial Day.

It’s seven days out, when precipitation forecasts have greater uncertainty, but currently Memorial Day looks as though dry weather will accompany the warmth.

In extended range guidance, there is no sign of abrupt or lasting cooling in the upper air pattern, which has much to do with temperatures near the surface. In the ECMWF ensemble mean, the upper air depiction at about 18,000 feet shows the biggest, warmest ridge of high pressure of the season stacked up near our region. The orientation of the flow and the coloring tells the story.

Note, please, that I’m not talking about midsummer heat here, but comfortable warmth. The upper air pattern in June remains too uncertain for me to begin speculation about temperature trends. For the final week this month, the Climate Prediction Center presents the highest probabilities for above average temperatures in the mean right in our backyard, which matches well with my prose.

Heartier pool owners can at least consider opening their pools for the Memorial Day weekend, depending on how much you can warm the water up later in the week.