Somebody offered barber Jason Lape a $100 bill to cut their hair during the coronavirus shutdown Saturday. It's not the first time someone has asked him to break the rules.

"It happens every day. Multiple times a day," said Lape, of the Razor's Edge Barber Shop in Hamburg.

Soon, he hopes, it will be safe to pick the clippers up again.

Gov. Andrew M. Cuomo confirmed last week that hair salons and barber shops will be included in phase two of the state's reopening, along with retail and professional services.

Western New York failed to qualify for phase one Friday due to its rate of Covid-19 hospitalizations and deaths. But phase two could begin 14 days after phase one starts. It could kick off sooner if certain health benchmarks are met, said Lt. Gov. Kathy Hochul.

When that day comes, it will be a relief for Lynn MacPherson of Cheektowaga. Her gray hair has been growing in for two months and she's had enough.

"It ages me," said MacPherson, 35. "I have medical issues I’m dealing with that make me feel old. It was something small I could do that had a huge impact."

For Michelle Trimper of the City of Tonawanda, it's more about the experience. 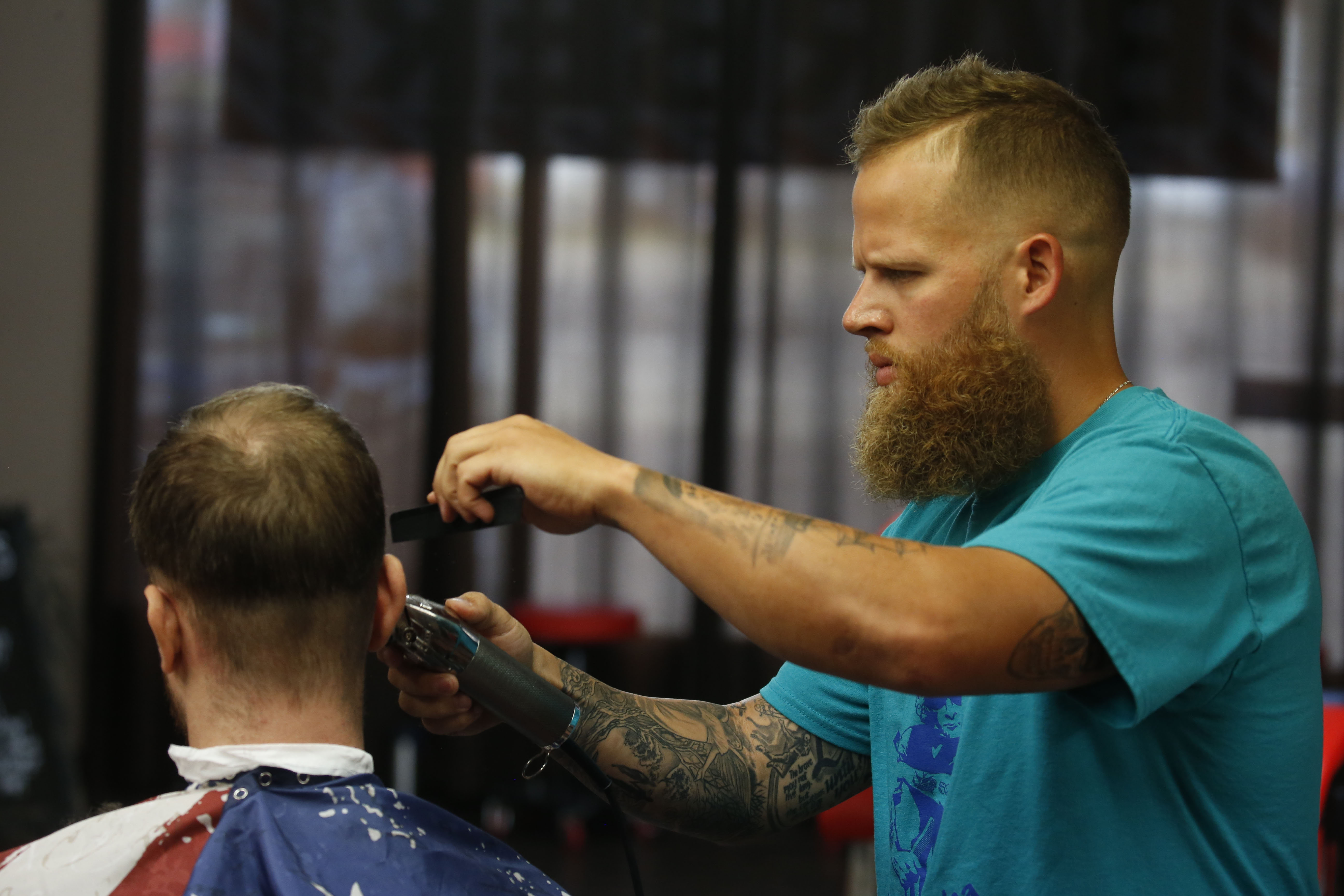 "My hairdresser is an amazing human and her salon is lovely," said Trimper, 55. "It's a forced relaxation."

Well, it's that and her long, black roots, which make her "look like Courtney Love," she said.

Reopening will be a relief for Sue Ohrum and her staff of five at Hizair Salon in North Tonawanda.

"I think the first day will be scary, but we will all get used to it," she said.

Ohrum is still waiting for guidance from the state on how to safely reopen. In the meantime, she has been brainstorming plans of her own.

Stylists will set up at every other workstation and wear scrubs that they'll take off and leave in the wash at the end of the day. Furniture, magazines and drinks have been removed from the waiting area and, once the salon reaches its capacity, customers will have to wait their turn outside the salon or in their cars.

Services will be held by appointment only, clients will wear disposable capes and, "No mask, no service," Ohrum said.

The state is vague about exactly which businesses will be included in New York State's second phase of reopening, so it's not clear when nail salons, tattoo parlors and pet groomers will reopen. But Cuomo confirmed specifically in a news conference last week that barber shops and hair salons will reopen in phase two.

Hair salons, barbers can't reopen for at least a month in WNY

Cuomo has not yet disclosed any special rules businesses will be required to operate under when they reopen in phase two, but the state provided four pages of mandatory guidelines for companies opening under phase one. They include rules involving health screening, testing and tracking, as well as protective equipment, cleaning, hygiene and distancing protocols.

Companies reopening under all phases are required to prepare a detailed safety plan that can be made available to government employees, government representatives and patrons alike.

Though Lape at Razor's Edge is as eager to get back to work as any other salon owner, he is not pressing the government for permission to open before it is safe to do so. He voluntarily closed before the state's pause order went into effect out of concern for his clients' health.

"We hear all about their lives. We listen to their problems," he said. "Over time, many customers have become close friends of mine."

And social distancing is impossible during a haircut, Lape said.

"I have to be hands on with human beings, 15 plus people every day," he said.

One barber caught unlawfully cutting hair near New York City has tested positive for Covid-19. He was found to have infected at least a dozen customers, the Ulster County Department of Health announced last week.

"As much as we would all like to go out and get a professional haircut, this kind of direct contact has the potential to dramatically spread this virus throughout our community and beyond," said Ulster County Health Commissioner, Dr. Carol Smith.

Still, barber salons are more hygienic than stores and other essential places that have stayed open, Lape believes.

"The whole time you're in barber school, they stress how to control the spread of infectious diseases," he said. "You learn as much about that as cutting hair. So it's nothing we're not prepared for."

Watch now: How to read New York's 'dashboard' for reopening