Tyree Parker has no doubt that JaVaughn Jones is a future Division I basketball player.

Though Jones is only 5-foot-9, he can leap out of the gym. He’s fast. He can lead. He’s a pass-first point guard, but one who knows when calling his own number is the best option on a possession. Most importantly, he plays lockdown defense, as he proved during the recent scholastic season in which he helped Health Sciences post a 23-1 record en route to capturing the overall Section VI Class A championship.

Jones had such a breakout season he earned Allen Wilson Buffalo News Player of the Year honors. He hoped to build on the momentum of earning that distinction during the AAU season this spring while playing for Parker and Corey Graham Elite’s 17-and-under team.

The coronavirus pandemic changed those plans.

The AAU basketball season for boys and girls hasn’t been canceled, but it’s unknown when/if the season will start. Teams usually gathered in mid-to-late March and played games in April and May that have now been called off. Instead, it’s been a time of no practices or games for players who not only had hoped to impress college coaches but also make significant jumps in their skill levels by practicing and playing against other elite talents.

“The pandemic has affected my recruiting," Jones said, "but I just have to work harder next year."

He likely is not the only prospect thinking along those terms.

On Thursday, the NCAA extended the recruiting dead period another month to June 30 and said it will review the dates May 27. That means coaches cannot scout players in person and cannot have face-to-face contact with recruits or their parents, meaning no in-home or campus visits.

“It just seems like every time we think we’re going to have an opening, the window closes back up,” said Eric Bossi, a national basketball analyst with recruiting website Rivals.com. “It impacts different kids in different areas of the country differently. … We’re definitely going to see recruiting is going to become regionalized for Class of 2021 because people are going to recruit people they know.”

Corey Graham Elite had three tournaments canceled, including two on the heavily recruited Under Armor Rise Circuit slated for Indianapolis and Kansas City that would have drawn a who’s who of Division I coaches.

Instead of performing before them, Jones can only train and work out at home. He plays pickup in the yard against his younger brother and their friends – hoping his video highlights from the past season can enhance his reputation outside Western New York while trying to remain positive even though this is a crucial AAU season for the Class of 2021.

“It hurts the younger players because they were going to play Under Armor in their respective age groups at a high level building their game and resumes,” said Parker, who coaches Jones in high school and AAU. “This year was going to be a major year for him because he’s a player on 17-and-under team at the highest level. It was his time to show the college coaches he could play with the best in the country.

Jones averaged 20.6 points, 7.4 rebounds, 7.3 assists and 5.0 steals per game for Health Sciences – increasing his points-per-game average by eight points and his assists by nearly three per game from his sophomore year.

He has generated interest from mid-major Division I programs, but that hasn’t translated to offers. That’s because they wanted to see him prove himself on the court.

That’s the purpose of the AAU circuit. It’s a proving ground for student-athletes hoping to gain increased attention – and potentially scholarship offers – from college coaches by facing talented counterparts from across the country. It is more imperative for players from lightly recruited areas such as Western New York.

The lack of an AAU season followed the cancellation of the New York State Public High School Athletic Association tournament and New York State Federation Tournament of Champions for boys and girls, shortchanging players of opportunities to be seen. College coaches and talent evaluators typically come out for the championship events because the games tend to feature top-end talents and teams playing in pressure-packed situations.

“College coaches that I’ve talked to who want to look at our guys are hoping everything is cleared up hopefully by July so they get an opportunity to watch some of the kids in Buffalo that (they’re interested in),” said Parker, co-coach of 16-and-under and 17-and-under Corey Graham Elite teams. “Us not being able to play in any Under Armor Rise events is hurting their recruiting.”

Bossi said the top 100 to 150 prospects won't be affected by no AAU games. It's those prospects who coaches don't have as much familiarity with who could see their options dwindle.

"The guys who they’ve only seen on film or maybe not at all, it’s tough," Bossi said. "Factor in that transfers have become so hot in college basketball, these kids particularly in Class of 2021 have been severely impacted in terms of their chances of being able to display their talents in front of college coaches. Their chances have been very limited.”

While the pandemic has impacted all members of the junior class, it also had affected seniors scrambling to grab whatever scholarships remain for the coming school year.

That’s at least one big game with a potential of three total in which Vass likely would’ve played before Division I and II coaches, plus the missed AAU tournaments. Vass opted to accept an offer from national junior college power Iowa Western Community College, which has sent 20 players to Division I programs the past four years.

With the AAU season still up in the air, Vass decided the best thing for him would be to make sure he has a chance to be seen by Division I coaches at as high a level as possible.

“They would’ve given me more time (to see if there would be AAU games), but I just thought why wait,” said Vass, who had scholarship offers from Division II schools Anderson (S.C) and Benedict (S.C.). His hope is to attract a Division I offer in his first season at junior college in order to maximize his time at a four-year school.

While Vass found a home, fellow AAU teammate and senior Jaylen Stewart of Amherst, a 6-3 point guard and second team All-Western New York pick, likely will have to go the post-graduate route unless the season resumes. But he’s keeping his options open and working out on his own – doing pushups, dips, bike rides and shooting drills in his backyard.

“It’s difficult,” Stewart said. “AAU season is a huge part of basketball, especially for people trying to go to the next level. … I’m hoping we get a chance (to play this summer). It’s really tough right now.” 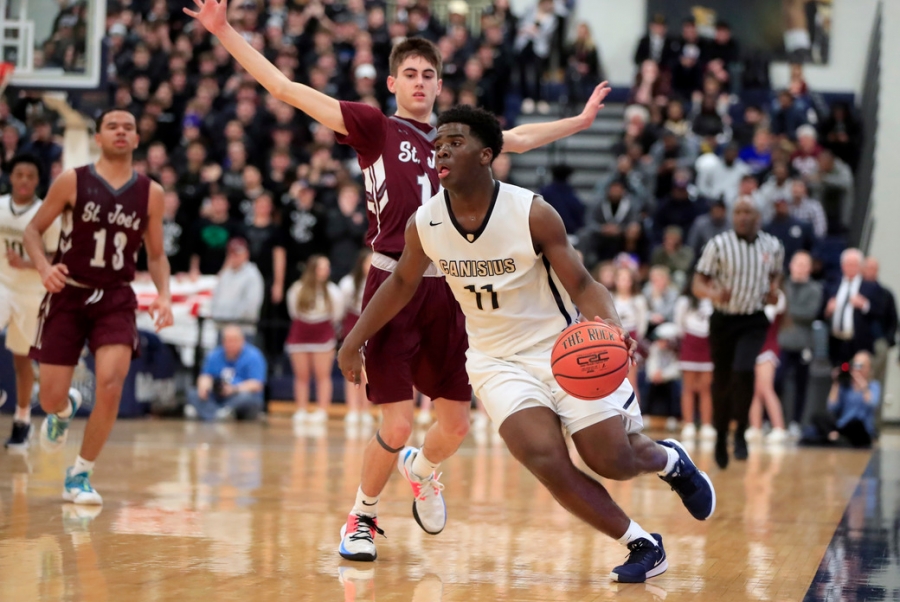 The cursed pandemic not only is affecting the development of juniors but also seems to be leading to quicker college decisions, especially among girls basketball players, according to Jamestown Elite Girls AAU coach Ken Ricker.

“I think both colleges and players alike have adjusted to the lack of an AAU season by offering and accepting commitments earlier,” said Ricker, who led Dunkirk to 24-1 season and the Section VI Class B girls championship before becoming the coach at Jamestown Community College.

“I would think a lot of AAU coaches and trainers are advising their kids to do that and correctly so," he said. "There might not be as many spots available for these kids next year (depending on the length of the pandemic). If there’s one available, they may want to sign up for that.”

Juniors Amelia Strong and Aaliyah Parker from Cardinal O'Hara have recently committed. They likely would have attracted more offers but opted not to wait for their own reasons, respectively. Strong chose Long Island U. Parker wanted to play with her older sister at Niagara so pounced on the Purple Eagles’ offer.

“It goes to show you sometimes the girls are thinking of things with great perspective," Beutel said. "They’re making decisions sooner, which may not be a bad thing in this day and age.”

In the men's college game, offers aren’t being easily as tendered or accepted – unless one is viewed as a can’t-miss prospect such as Lewiston-Porter’s Roddy Gayle and Park School’s Jalen Bradberry. Gayle, who is a member of the Class of 2022, continues to add offers from major programs, while Bradberry was offered by St. John's and Massachusetts in the last week.

Though the coaches still want to see Class of 2021 prospects, the trend is starting to change because of the pandemic, Bossi said.

Bossi used Loyola Marymount in California as an example. The school recently landed three pretty good Los Angeles-area recruits it might not have landed in past years.

“If you have someone who likes you, you have to do an analysis on, do I take my chances or do I lose a sure thing," Bossi said. "Every kid dreams of playing at Duke or Kentucky, but maybe that offer from Canisius is a pretty good option. He may think 'I may need to take that option before someone else plays their way into that scholarship.' ” 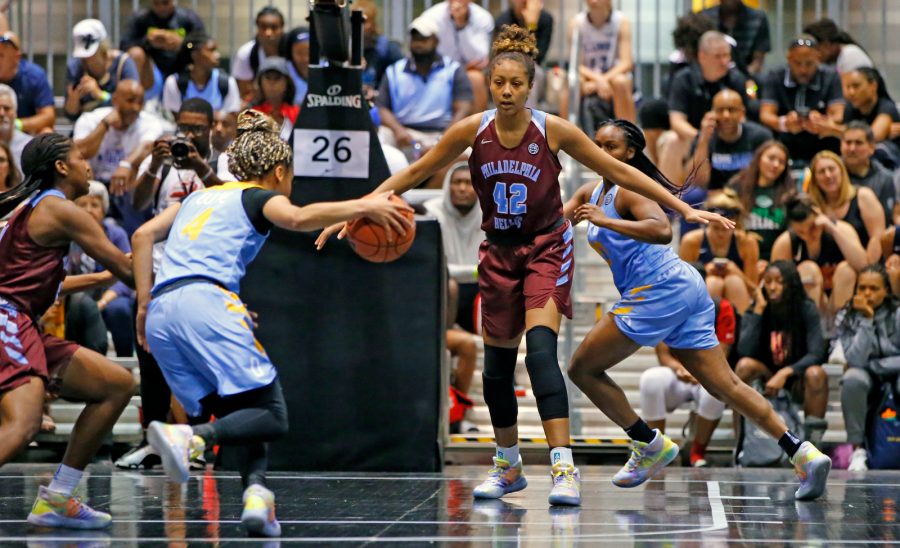 Connecticut commit Amari DeBerry of Williamsville South plays AAU with a team based out of the Philadelphia area and was surprised when she was notified that the team was scheduled to work out Saturday in Wildwood, N.J.

DeBerry, the Sister Maria Pares Buffalo News Player of the Year and New York State Sportswriters Association Class A Player of the Year, and her teammates have been relegated to Zoom online chats and each player training on her own at home.

Plans called for the outdoor workout to focus on conditioning and individual drills, she said. Each player was to wear gloves and a mask and have her own basketball with cleaning supplies available. Players were not expected to guard each other to avoid close physical contact.

"With the circumstances, to get things done, this is what we have to do," said DeBerry, who plays on the 17-and-under team. Her Will South teammate, Gretchen Dolan, plays for the Belles' 15-and-under team.

DeBerry is eager to get to work with her teammates as there’s nothing like competition to prepare for the United States 17-and-under national team tryouts in late July.

“I’m hoping everything will be opened soon," she said. "However, safety and health for everyone needs to come first.”

The Corey Graham Elite teams are still playing the waiting game. Parker said he hoped the Belles' practice in New Jersey leads to a domino effect in which other programs can get on with their respective seasons.

“It’s my first time hearing any AAU basketball being played on my end,” Parker said. “It’s a good sign.”

Bossi doesn't anticipate big national events, even if the pandemic ends with time to conduct some form of a season. Tournaments likely would be scaled down because every state is operating on a different timetable for reopening.

“I do know the NCAA recognizes the potential impact this is having on prospects and not just in basketball," Bossi said. "Until there's more certainty, it's hard to put a plan in place.”

Jones has no choice but to remains optimistic in the face of uncertainty.

“Good thing I have one more year to prove to every school that I’m worthy of a scholarship,” Jones said.