College nursing student Alex Hubert got over a mild case of Covid-19 in March.

Both landed on opposite ends of an antibody infusion, a new treatment expected to grow more common around the world if early indications of its usefulness continue.

Hubert is among more than 100 Western New Yorkers who so far have donated plasma containing antibodies that helped her fight off her sickness.

Krzemien received a unit of antibodies from another donor in April, after several days at a plateau in his illness.

“I believe that that's when I turned a major corner,” he said. “That's when my breathing, especially, started to be much more manageable.”

Regional hospitals last month began using antibodies to treat some Covid-19 patients as part of the National Covid-19 Convalescent Plasma Project, which the Mayo Clinic coordinates across the country.

Dr. Michael Joyner, a Mayo physiologist and principal investigator, announced last week that a preliminary look at half of the 10,000 experimental treatments so far suggests they are safe. They also appear effective, although just how effective is hard to determine because there is no control group receiving a placebo.

“We don't want to make it seem like it's a panacea, but if you can give some type of therapy that can slow down the virus progression, that will be helpful,” said Dr. Manoj Mammen, a critical care physician who treated Krzemien. He is one of about 5,000 doctors nationwide participating in the expanded access antibody study.

Krzemien, 77, a retired Erie Community College social sciences professor, arrived at Buffalo General on April 9, more than a week after he and his wife, Elaine, came down with Covid-19 symptoms. The most pronounced were extreme fatigue, a total loss of appetite and, at times, extreme chills. 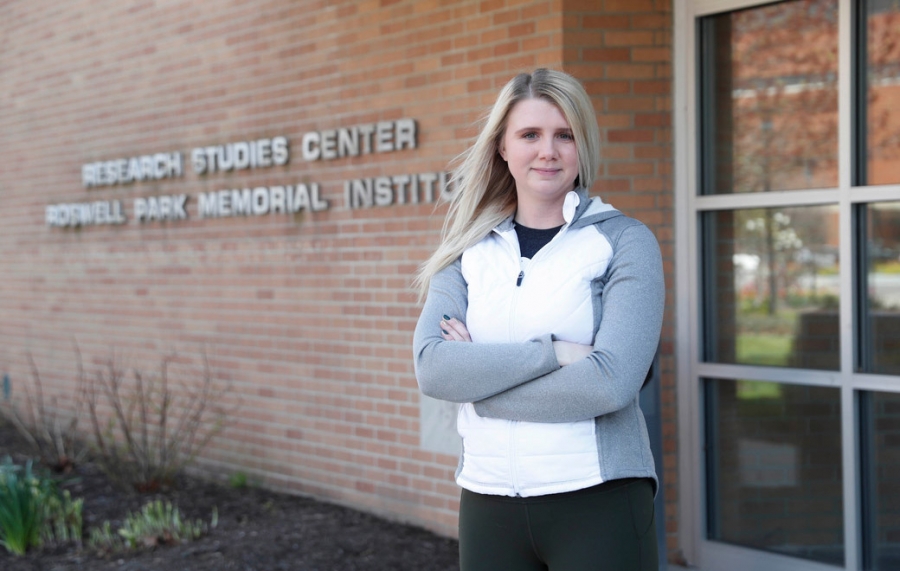 Alex Hubert, a Niagara College Community College nursing student and a phlebotomist for Quest Diagnostics, said Covid-19 turned into quite an education after she contracted it in mid-March. (Sharon Cantillon/Buffalo News)

By that time, Hubert, 24, felt better after a more manageable fight with the new disease.

“It started off as a pretty intense flu,” she said. “I didn't get a cough until later into the illness, probably day seven. The sickness lasted around 10 days.”

Hubert, who has asthma, recovered as her school break extended into a second week and the rest of the semester resumed online. She quarantined in her North Tonawanda apartment with her 90-pound Great Pyrenees. Her parents left groceries and antiviral prescriptions on her porch.

“All I did was study and sleep,” she said. “But toward the end, I was trying to get up and move because I know that's the best thing for your lungs.”

Shortly after she got sick, Hubert ordered a test kit for the virus from Quest Diagnostics, where she works as a phlebotomist. She didn’t receive one in the mail until March 31, because of the early shortage of testing supplies. Three days later, she learned she tested positive.

Hubert had to test negative twice before returning to work in mid-April. She did so with a greater confidence as many of those who arrived for testing showed up with respiratory infections. Still, like her co-workers, Hubert wore a surgical mask and face shield as she worked in Quest offices and a drive-through coronavirus testing site in Cheektowaga. 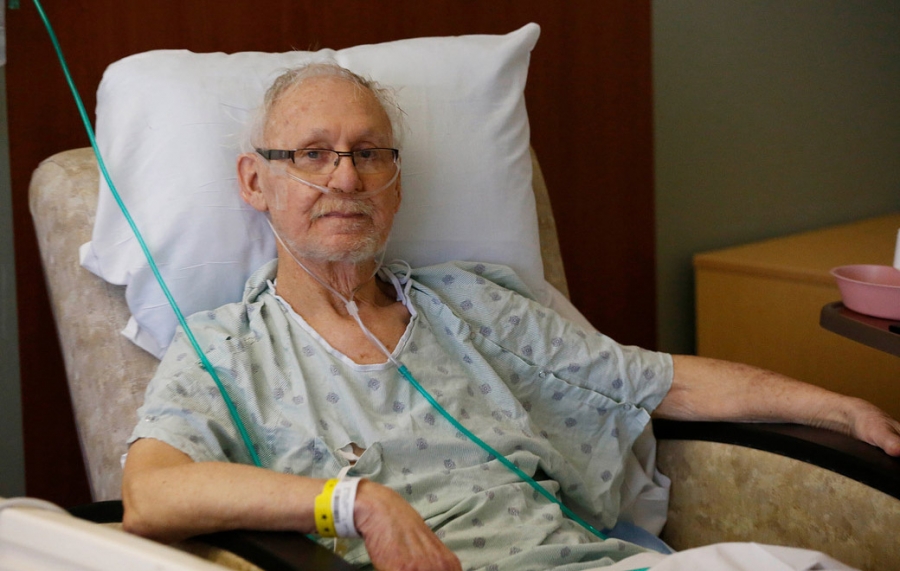 Gerald Krzemien, 77, of Cheektowaga, left ICU three days after he received convalescent plasma at Buffalo General. He remains under no illusions that, while he's getting better, he's in for a long recovery. (Sharon Cantillon/Buffalo News)

She was hardly alone.

“We've have a ton of people who want to donate,” said Dr. Joanne Becker, donor center medical director. “It's like it was after 9/11.”

Center staff – already proficient in collecting whole blood and platelets to help with cancer treatments – use a similar process to remove yellowish plasma and the Covid-19 antibodies from donors and return red blood cells and other blood components.

Because plasma regenerates faster than whole blood, donors are welcome to give again after a week.

Several donors, many of them in the health field, have done so – including a doctor who has donated at least four times.

Donors must be in good health, provide proof they tested positive for the presence of the virus at least four weeks ago and be symptom-free for at least two weeks.

Researchers hope antibodies that proliferate to help slow and then mop up a Covid-19 infection will remember the novel coronavirus if they see it again, and perform the same function.

Mammen and other doctors said they’ve seen some patients recover more quickly. They wonder whether providing antibodies to patients shortly after hospitalization may spur a more pronounced impact.

The Donor Center has been able to manage demand for Covid-19 antibodies and blood products needed by cancer patients, though Becker encouraged others to consider donating in this unpredictable health climate.

Maria Turner, the center's marketing and communications manager, helps determine antibody donor eligibility. Most calls during the last month came from those who learned they had the virus after they developed symptoms. Several others who think they had Covid-19 but went untested also called but are ineligible under Mayo Clinic guidelines.

“It's been extremely humbling to hear the array of stories, to understand how people have been through some of the worst things in their lives, and now they're ready to move past that to help someone else,” Turner said.

Becker said recipients are matched randomly using measures that include blood type. AB is the universal type for Covid-19 infusions, though all blood types are welcome and needed.

Hubert gave antibodies May 6. She spent a little more than an hour at the center.

“It wasn’t a big deal for me and for some people who are sick, it's their last resort,” she said.

She plans to donate every couple of weeks. 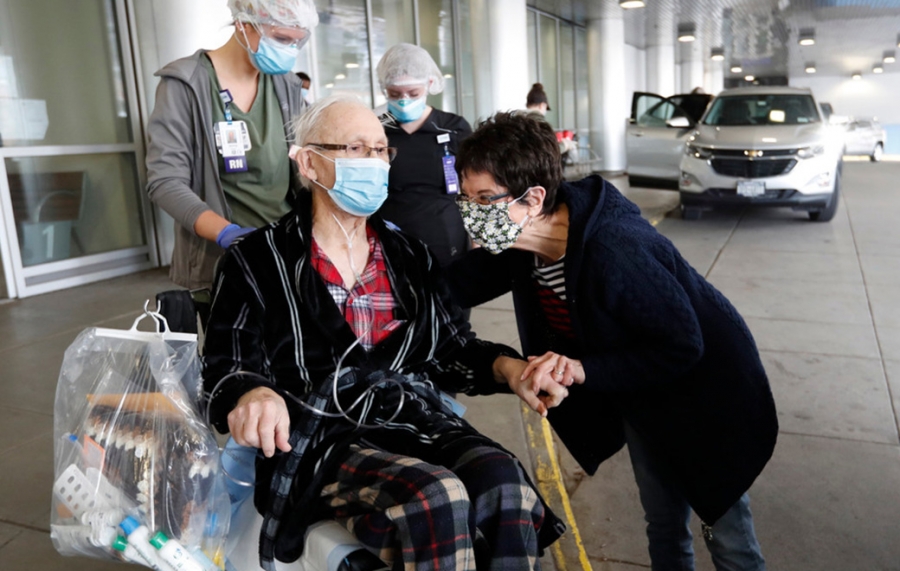 Elaine Krezmien sees her husband Gerald in person for the first time in 33 days on Tuesday, since he was taken by ambulance to Buffalo General Medical Center with Covid-19. The stay included a novel coronavirus antibody treatment that Krzemien says sped his recovery. (Sharon Cantillon/Buffalo News)

Krzemien ended his stay in the Buffalo General ICU and was in a regular medical-surgical room by the time Hubert had made her donation.

Krzemien suspects he and his wife caught the virus from their son, Jason, who offered to stay with his parents in mid-March as the coronavirus pandemic intensified. He came down with flu-like symptoms shortly afterward but quickly bounced back.

Both parents fell ill in late March. Elaine Krzemien recovered in a few days but Krzemien – diagnosed with chronic lymphocytic leukemia in 2004 – was unable to stave off his symptoms.

His daughter, Heidi Campbell, a physician assistant, told him to visit the Roswell Park urgent care center on April 8 after he developed a slight fever. He was sent home with a pulse oximeter to read his blood oxygen levels. He called Roswell a day later when his readings registered 10 points lower than the comfort range.

An ambulance took Krzemien from his Cheektowaga home to the cancer center. He was transferred to a Covid-19 wing at Buffalo General shortly afterward.

The setback came after two knee replacements, the first in late October, the second in January.

They may have been blessings in disguise.

Krzemien for years has worked out six days a week at home to tai chi and stand-up yoga TV programs and videos. He believes those and physical therapy after the knee surgeries helped provide the stamina he needed to stay alive.

“I learned how to breathe deeply," he said, "and what I discovered is that it has been an invaluable skill.”

More than 15 years of blood draws and injections only partly prepared Krzemien for his first Covid-19 test.

“The joke among the staff is you’ve got to stick the swab up the nose and into the brain,” he said.

A second test given by mouth after Krzemien arrived April 17 in the ICU confirmed he still had the disease. It also paved the way for his antibody infusion – something he embraced as eagerly as clinical trials he has agreed to during his leukemia battle.

It took 15 minutes to drip the convalescent plasma through a metaport near his right shoulder, where he receives monthly, two-hour intravenous immune globulin cancer treatments to promote healthy cell growth and ward off infections.

The treatment came on a Wednesday, as he remembers, about halfway through his intensive care stay. His labored breathing steadied that Saturday. He left the ICU three days later.

Krzemien received oxygen through various lines and gadgets from the time he arrived at Buffalo General until after he got back on a medical-surgical floor. He never needed a ventilator. He lost 30 pounds.

Staff encouraged him to challenge himself through the hospitalization process. At its worst, that meant trying to sit up in a chair next to his bed for even a few minutes. Several days after leaving intensive care, it still took him two or three minutes to move to a chair, with help.

His wife and son, the latter of whom Krzemien called “a godsend” for the help he has provided, picked him up when he was released from the hospital on Tuesday.

He arrived home after not seeing his family – except on a smartphone – for 33 days, but still in plenty of time for he and his wife to celebrate their 53rd wedding anniversary together on June 17.

His voice still sounds scratchy. He has been encouraged to cough – and blow into a spirometer several times a day – to strengthen his lungs.

“These kinds of experiences are not races. These are marathons,” he said. “My daughter calls it baby steps. We all are pretty much on the same page in regard to a very slow, but positive recovery.”

How to donate Covid-19 antibodies 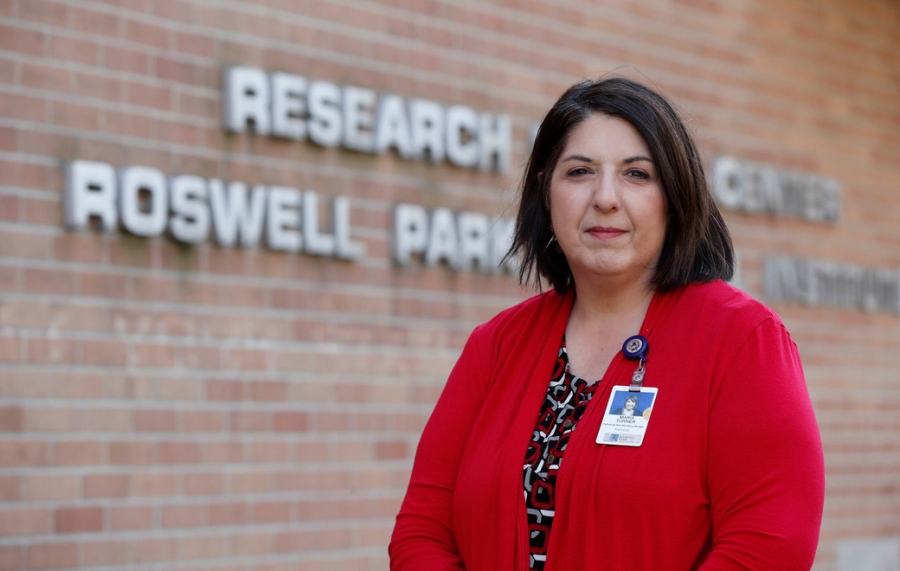 Those who tested positive for the presence of the novel coronavirus – not an antibody test – can apply to donate convalescent plasma used to treat those sickened by Covid-19.

How the donation works: