The last time Joe DiLeo saw Joey Giambra, his old friend had just promised a new acquaintance that he could have a copy of "La Terra Promessa," the documentary Giambra created on the Italian-American experience in this region, a film that involved DiLeo's help.

Yet Giambra could not find one to give away. He made a quick call to DiLeo, 80, who told Giambra he would stick a copy of the film in the mailbox on the porch, aware that they needed to be sure they kept their space in a pandemic.

Then again, these guys grew up on the West Side, practitioners of the beautifully emphatic speech of their neighborhood. Giambra stopped by and both men ended up in the driveway, where they could hear each other just fine by almost shouting from 15 or 20 feet apart, until Giambra ended the conversation the way he always did.

“They talk about people who are ‘teflon men’ because nothing sticks to them, and he was the opposite,” DiLeo said. “Whenever he came in touch with you, it stuck to him forever. He’d know your name, who you were, what you were talking about when you met, even if it was 40 years ago.” 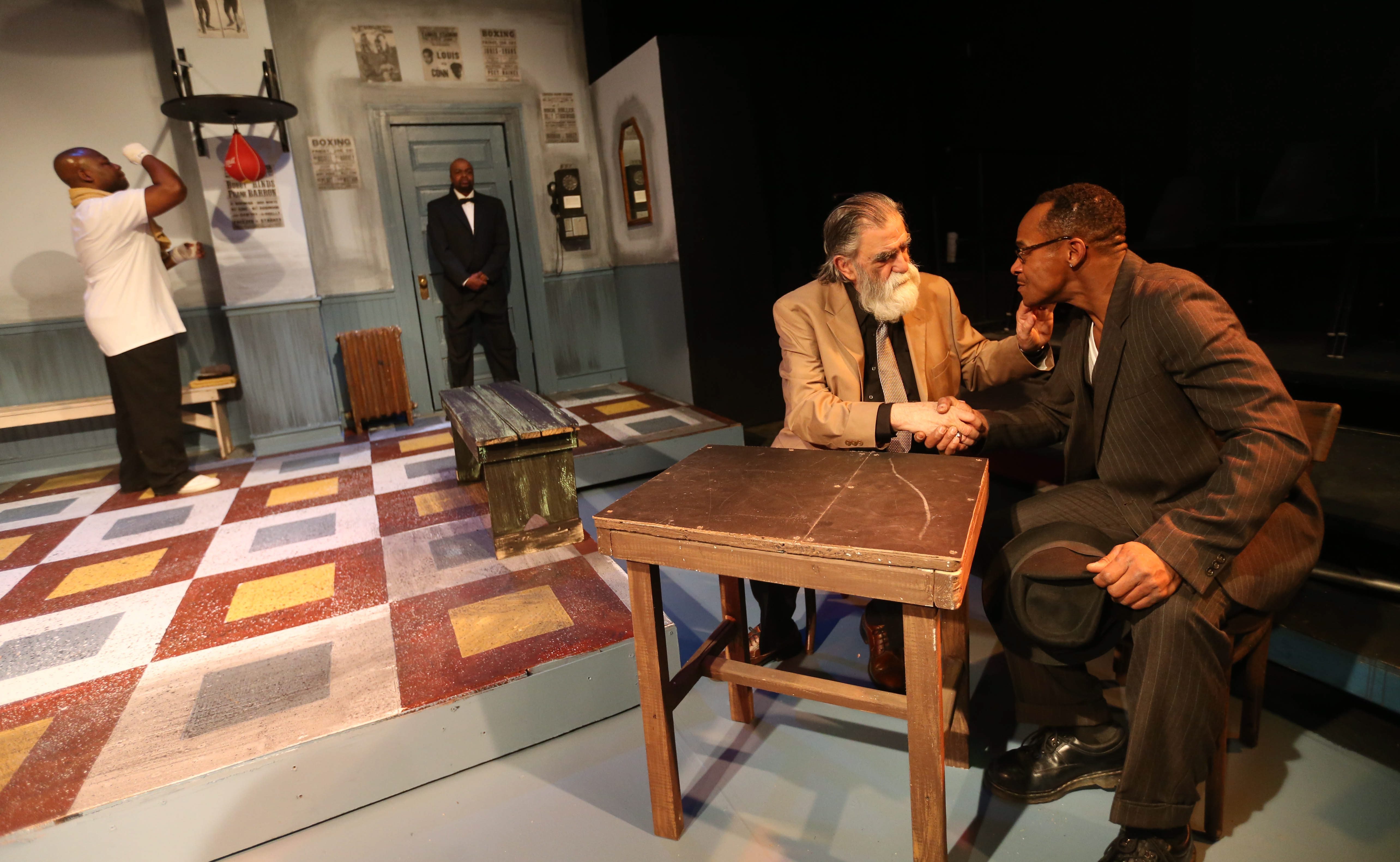 In any way, for whatever DiLeo needed, Giambra was there. A couple of weeks ago, when Giambra was hospitalized with Covid-19, DiLeo did his best against all the obstacles to do the same.

Quickly, now, let us briefly note in a paragraph or two what could not be fully captured in 1,000 pages about an epic Buffalo life that ended Thursday. Giambra, at 86, was a retired police sergeant detective and a jazz musician, a poet, a composer, a filmmaker, an author, an actor, a chef, a historian and a playwright who also spoke fluent Sicilian.

He was a husband, dad and grandfather whose warmth and interest locked in countless and varied friendships. That might be with, say, DiLeo, a retired postal worker, or it might be with an actor and director such as Cheektowaga native Bill Fichtner, who remembers Giambra's “powerful soul and presence, his gentle spirit.”

Giambra and DiLeo met in 2007, when Giambra was curious about DiLeo's Per Niente, which began as a little journal about Italian heritage on the West Side – then exploded into a glossy magazine and a club with hundreds of members who provide quiet help to those in need in the neighborhood.

“At the time, Joe was working at Buff State, and he had a small office,” DiLeo recalls. Giambra asked him to stop by for lunch, which DiLeo assumed meant going to a restaurant.

Instead, Giambra set two napkins on his desk and prepared a feast with olives, cheese, pepperoni and a loaf of fresh Italian bread. They ate slowly, joyfully, realizing how as kids they walked the same streets and were shaped by the same place. Soon, Giambra was editing and writing for Per Niente, and the two men worked side-by-side on many projects.

DiLeo would observe with wonder as Giambra listened to an opera on the car radio, then broke it down as easily as a ball game. He saw how Giambra turned the back seat of his vehicle into a wild cultural repository of books and CDs and playbills and clothes, which is really where he kept:

“There were so many people who loved him,” DiLeo said.

Through Giambra, DiLeo met Dr. Joseph Quagliana, 85, who grew up above a Buffalo grocery store, played drums in Giambra’s teenage band at Hutchinson Central High School and eventually asked Giambra to serve as best man at his wedding.

Decades later, as an accomplished oncologist, Quagliana founded a clinic, the Cancer and Hematology Center of Nevada. DiLeo looked forward to a day when they again would all share a meal in Buffalo –"My thoughts and love are still there," the doctor said – but a pandemic does not respect plans or routines.

“Joe, I can’t taste anything,” Giambra said, a harsh situation for a guy who understood and savored a fine meal.

By April 25, Giambra was struggling. He was admitted to Buffalo General Medical Center and quickly placed in treatment in a Covid-19 wing. The doctors, realizing the danger, knew they had no choice but to put him on a ventilator.

Before that happened, from his bed, Giambra made some calls. He talked to his wife Shirley and his son Greg and other family members at the center of his life. He also reached out to DiLeo, who asked Giambra to wait for a moment as DiLeo punched a few buttons, and suddenly they had a conference call including Quagliana, far away in Nevada.

This was a guy who remembered when the words “Giambra’s playing tonight” were enough to bring adults to 1940s nightclubs to see a fledgling band, a guy who found an important teenage job shining shoes at the old Statler, thanks to Giambra.

The friendship never diminished – Giambra would ask his former high school drummer to be Greg's godfather – even as Quagliana dedicated his life to helping people ill with cancer.

By the end of the conversation, despite everything, they found a way to laugh.

DiLeo spoke of the sweeping range of Giambra's friendships, how he never stopped challenging himself or seeing the world in a fresh way. He was also close to Harry Lipsitz, a 29-year-old producer and casting associate in Buffalo with whom Giambra formed a small production company. 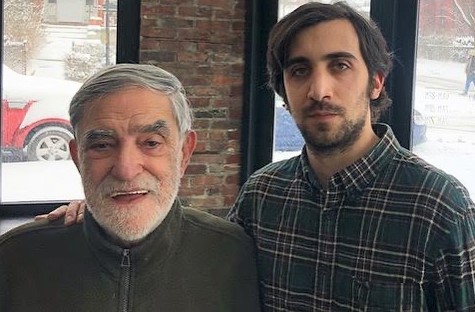 Lipsitz is half-Sicilian, and Giambra was a vivid witness to a long-gone Buffalo as Lipsitz's grandparents had known it. Like DiLeo, Lipsitz was in awe of the jumbled nature of Giambra's car – he once climbed in, then leaped up in surprise when he sat on a steak knife that Giambra casually explained he kept on the seat as a letter-opener – and they forged a communion that involved regular 7 a.m. calls.

Often, that led into Giambra telling some detailed story in which sandwiches – particularly capicola, or pepper and egg sandwiches – always served as props and symbols, leading both men into bursts of laughter.

Their connection began when Lipsitz returned from college for a senior thesis requiring professional actors. Giambra auditioned “and blew everyone away,” said Lipsitz, recalling how the then-80-year-old convulsed on the ground in raw emotion in order to play his part.

At Buffalo General, as Giambra spent more than two weeks on a ventilator, the nurses for whom the family feels such appreciation would hold the phone to Giambra's ear when relatives checked in. Last Thursday, at a quiet moment when the staff sensed what might be coming, Giambra's niece, Maria LoTempio Dines, contacted DiLeo and Lipsitz to see if they would like to join one of those calls.

Both men say they believe Giambra somehow knew they all were there. The family joined in reciting the Lord's Prayer and then played Giambra a recording of "One Not Two," a song he wrote and sang about the late Connie LoTempio, his baby sister.

Over the phone, in a moment of silence after the song was over, the little group could hear the sound of Giambra's heartbeat on the hospital equipment.

The call ended, leaving DiLeo and Lipsitz to contemplate what they had the chance to hear and say. Maybe 15 minutes later, they learned from Dines that Joey Giambra had just died. The situation provided no chance for last words, but everyone in Buffalo already knew how he liked to close a conversation, with a statement of far more meaning than goodbye.

"That energy," Lipsitz said, as grief and promise. "It's not like it will stop."

Contributions are being accepted for the Joseph G. Giambra Fund for Art and Culture.