It may not feel good, but at least chilly Lake Erie will have done its job Friday, with winds blowing off its 45-degree waters stabilizing the atmosphere over much of Western New York. The stabilization “shadow” prevents severe thunderstorms quite often at this time of the year on the Niagara Frontier (except when the unstable air is aloft, near a warm front, and not dependent on cooler, more stable surface air). On Friday, storms will be surface-based, meaning the cold water will do the trick. It’s along the southern edge of the Lake Erie breeze where storms have a chance of becoming severe, typically inland away from the lake breeze over hilly terrain, the Southern Tier and farther east toward the Finger Lakes. That’s where the strongest gusts and heaviest downpours typically develop.

As for the weekend days, the forecast improves through Sunday morning. A partly to mostly sunny sky by afternoon on Saturday combined with only a light northeast breeze will allow coolish readings near 60 (cooler at the lakeshores) to feel comfortable. Areas well inland should approach the mid-60s. By Sunday, the breeze will veer to southeast, becoming “downslope.” A downslope breeze warms and dries the air on the Niagara Frontier, slowing the approach of what will be abundant moisture. Newest model guidance is showing this trend. While clouds thicken, this high-resolution model doesn’t depict scattered showers until we get into the afternoon hours.

Afternoon coverage should be spotty and mainly light. The downslope breeze will boost readings to the mid-60s ahead of the showers, but it will be cooler near Lake Ontario. Sunday night, shower coverage and rainfall amounts will be increasing as an area of low pressure draws near later in the evening. Rain will likely be soaking and possibly heavy at times.

Rainfall amounts, mainly Sunday night, will exceed 1 inch and may approach 2 inches in spots, as seen in this projection from National Weather Service headquarters.

If these amounts are realized, we’d be heading past the muddy paws threshold and have to consider the possibility of poor drainage flooding in spots, when added to Friday’s rainfall totals. Individual models, such as the European/ECMWF, are also indicating the potential for heavy rainfall totals. 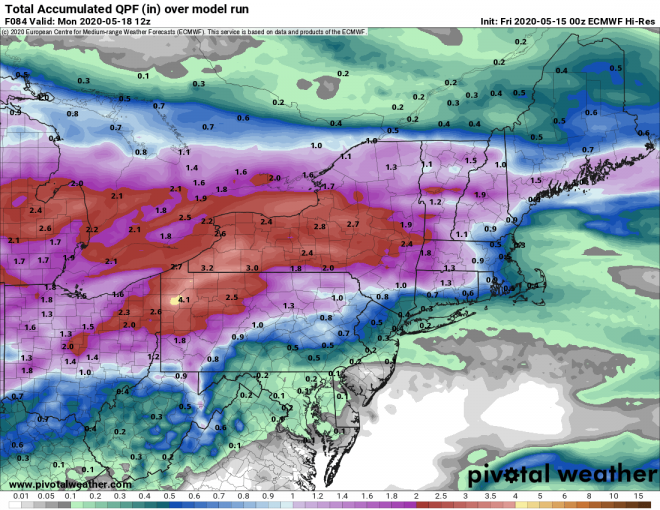 As the saying goes, “this will bear careful monitoring,” and I will update the forecast during the weekend in the comments section below as necessary.

On Monday, we’ll be back to damp and cool with the low pressure system past us. After morning rain, showers will become lighter and more intermittent in the backwash of the low by afternoon. The northeast flow behind it will take temps back to below average, only in the 50s. By Tuesday, a drier air mass is shown to be returning in the ECMWF, which would allow more sun and readings returning to 60. However, the American GFS sees no such optimism for Tuesday, keeping showers solidly in place, as does the Canadian GEM. In fact, there is a chance of what is sometimes called a PRE rain event occurring near us, where moisture converges in a band well ahead of and away from a subtropical low in the Atlantic. This is depicted on Tuesday in the GFS.

This scenario is far from carved in stone, and would be an unwelcome additional shot of rain on top of the rain expected Friday and Sunday. There is good model agreement on a dry Wednesday and most of Thursday, before a chance of scattered showers returns toward Friday. Temperatures should be moving up from Wednesday’s mid-60s to lower 70s by Thursday and Friday.

In the extended range, the ensemble means of both the ECMWF and the GFS favor a milder upper air pattern in the east for much of the latter part of the month, following the early week rain next week. This upper air doesn’t speak to rainfall chances, but it does cut the east off from tapping chilly air masses to the north.

The Climate Prediction Center, viewing this data, also suggests a good probability of above-average temperatures in the mean during days 8-14. Anything above average by that time of the month will feel genuinely warm, if not summery.

It can’t always be done, but it’s nice to finish up on a high note.