While the rest of Western New York remained on pause, the Transit Drive-in reopened Friday to what qualifies as sold-out crowds in the Covid-19 era.

Patrons wore face masks and practiced social distancing at the snack bar and between cars as they enjoyed a night out at the movies for the first time in two months. Gov. Andrew Cuomo ordered movie theaters to close March 16, but said more recently that he saw no reason why drive-ins couldn't open.

"It's just awesome that we're finally able to get out of the house and enjoy the weather," said Bryan Ficker of Lancaster, who spoke as fiancee Kayla Koller emerged from the Starlite Snack Bar with Raisinets, Peanut M&Ms and funnel fries.

"We just had a baby and we haven't done anything in quite awhile," he said.

Darrell Cheek, a Transit Drive-in regular, drove from South Buffalo with his fiancee and their two children.

"We were going stir-crazy," he said.

Owner Rick Cohen had rejected opening the Lockport drive-in weeks earlier, even as some theaters were open around the country, particularly in the Southeast. That's because he sees progress being made to reduce the spread of the virus in Western New York.

"We are on the down slope, not on the up slope," Cohen said. "We are in a much better place, and we're starting to open the economy smartly and in phases."

But Cohen felt uneasy, too.

"I'm anxious about how people will behave and react to the new procedures," he said. "I really don't have very much choice. I have a responsibility to the health and safety of my guests and my staff. If people aren't happy with the restrictions, they shouldn't come. 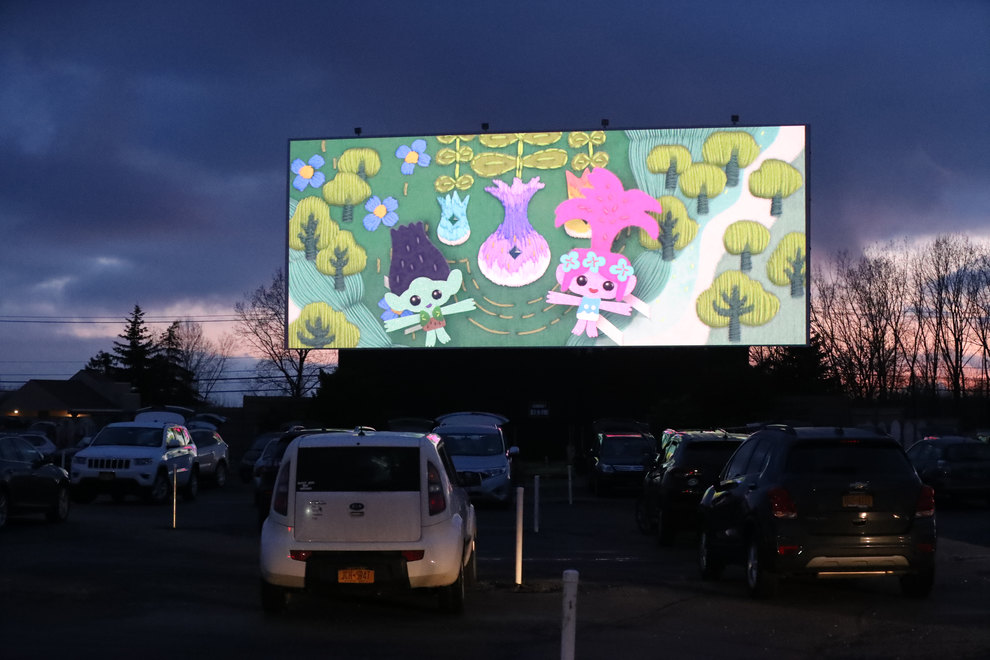 Cohen, who patrolled the drive-in on a Segway, said he would have little patience for people who don't follow the rules.

"It's my job to protect people here, and if they aren't going to abide by our guidelines, they are going to be gone," he said.

There were 365 cars in attendance to watch "The Invisible Man" on three screens, plus 275 cars to see "Trolls World Tour" on two screens.  The combined 640 cars were still about half the number of cars the Transit gets on weekend nights, when all five screens are typically sold out in June, July and August, Cohen said.

"The state has advised us to cut back to 50%, and I am in complete agreement," he said.

Cohen said there was up to 12 feet of space between vehicles, which Amanda Cross of Sanborn appreciated as she sat with her three children inside her Honda Pilot, waiting for the projector to send a cone of light onto Screen 3.

"I feel like they have done a really good job," Cross said. "We're a lot farther apart than we usually are. I feel safer, but I feel safe in general because we can stay in our cars."

Paul and Kristie O'Brien of Wheatfield sat in the front row in lawn chairs, with their daughter, Emily, sitting up high in the back of the family truck.

Charley, a Maltese poodle mix, wore a small mask around its neck.

Kristie O'Brien said it felt like a safe environment. She also appreciated how only one person at a time was allowed into the bathroom, and that it was disinfected by an employee after each use.

There were other noticeable changes because of the novel coronavirus.

Tickets were only available in advance online, which were read by digital scanners when cars pulled in.

The snack bar was limited to 10 people at a time in the lobby, with a line outside monitored by staff to make sure people were standing 6 feet apart.

An app to place orders is expected to be ready in a week or two to further reduce exposure, Cohen said.

Logan Krieger of Lockport said the changes didn't take away from the fun his family has at the Transit.

"I love going to the drive-in," Krieger said. "I like the atmosphere. Sometimes we go to the playground, but we can't for obvious reasons now."

Jared D'Angelo of Getzville admitted to feeling conflicted. It was great to see his friends, who he said he hadn't seen in months, yet he wondered if it was too soon to be loosening restrictions.

"It's a good thing this part of the state hasn't really been open due to how high the infection rate is," D'Angelo said. "I don't even know if it was a good idea for me and my friends to come out here. We're doing our best to distance ourselves, and we all wear masks when we're around each other.