Newbery Medal-winning author Erin Entrada Kelly ("Hello, Universe") takes the reader back to the Reagan years, in the weeks leading up to the Challenger tragedy, in this poignant novel of space exploration and family as three siblings in Park, Delaware, try to navigate their own paths in a family that has drifted apart. "There was a time when the Nelson Thomas family orbited the same universe but that was in the distant past. They'd drifted apart at some point, but no one knew when or how." 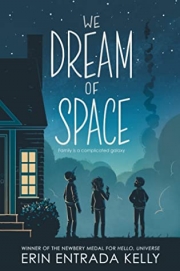 With parents that constantly squabble and belittle each other, the three kids find themselves emotionally isolated from their parents and each other and forced to figure things out on their own.

The narrative shifts between the three very different siblings, and their separate orbits in the challenging universe of middle school, in a kind of countdown to the Challenger launch. Bird is a conscientious student, a curious girl who is constantly taking things apart and drawing schematics about how things work. She admires her science teacher, feels a kinship with Challenger mission specialist Judith Resnik and dreams of being a shuttle commander. Her twin, Fitch, who has an explosive temper, spends as much time as possible at the video arcade to avoid going home to his battling parents. He ends up suspended from school when he mocks a classmate, echoing his parents' jabs at each other. Older brother Cash failed 7th grade, was dropped from the basketball team and is experiencing the humiliation of repeating the year, in the same grade with his younger siblings.

The author offers a vivid portrait of an unhappy household: Parents having an angry argument after their new VCR failed to tape "Days of Our Lives," a small house full of clutter, a family that never eats dinner together, a father who proclaims that women don't belong in space, an unhappy mom drinking SlimFast and cautioning Bird against weight gain. The hurts and trials of adolescence for all three siblings are magnified by the pain of living in this fractious household. Visiting a friend's home, where nobody fights and the family sits down for dinner together, is a revelation for Bird.  At one point she muses: "The Thomas family was like its own solar system. Planets in orbit. No, not planets. More like meteors or space junk. Floating objects that sometimes bumped or slammed into each other before breaking apart. Time to drift back to my orbit, Bird thought." How perfect that it is her brothers, not her parents, who realize how deeply upset Bird is about the Challenger explosion. It is her brothers who understand that Bird has always been the steady rock at the center of the household. 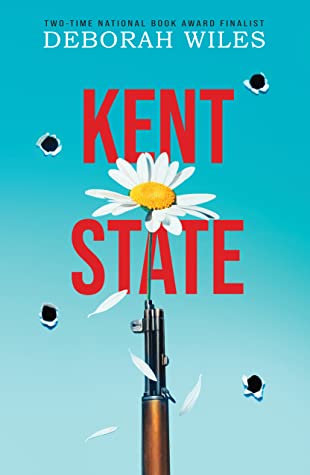 Deborah Wiles, a National Book Award finalist for novel "Each Little Bird That Sings" and documentary novel "Countdown and Revolution," offers a troubling, moving examination of the Kent State shootings of May 4, 1970, when National Guardsmen fired on college students peacefully protesting the Vietnam war, killing four and wounding nine. She uses poetry, a cacophony of voices, in varied typefaces, to sketch poignant portraits of the fallen (Allison, who told National Guard soldiers "flowers are better than bullets"; Bill, an Eagle Scout; Jeff, who went to Woodstock and was shot through the mouth and killed; Sandy, an animal lover who was walking to class when she was killed) and to recreate the charged atmosphere, the confusion, the conflicting viewpoints, the sequence of events that fateful weekend leading up to the massacre that occurred 50 years ago this month.

There is still argument over what some details of what happened, and Wiles writes:  "You employ the facts as you can confirm them, and you mine those memories – the collective memory – as best you can." She writes of town-gown tensions. We hear the voices of the protesters, the friends of those who were killed. We hear from the Black United Students from Ohio State who had been clubbed and beaten at a protest in Columbus and who warned Kent State students that Ohio Gov. Rhodes "likes to call out the Guard." We hear voices of the National Guardsmen, who had just been called away from trying to keep the peace between striking Teamsters and truck-driving supervisors. In an afterword she offers background on the protest songs inspired by the Vietnam War and Kent State massacre, along with a heart-felt call to action for the present from the tragedy of 50 years ago: "What would have happened if we had not, as a nation, dearly loved our myths and the biased and distorted misinformation from powerful vested interests, and had instead investigated the facts ourselves, found alternate news sources, and listening to the young whose lives were on the line every day?"