Keeping employees on the payroll instead of laying them off.

Those are some ways local businesses who have received Paycheck Protection Program loans say they are benefiting. The federal program's purpose: Keep small-business employees on the payroll in an economy marked by business shutdowns and disruptions.

The rescue program, overseen by the Small Business Administration, has received criticism, for quickly exhausting its first supply of funds, problems applicants faced in gaining access and other issues.

But local businesses that have obtained PPP loans, with the help of lenders, say the funds have provided vital support amid the Covid-19 pandemic. If the recipients follow the program's guidelines over an eight-week span – such as spending the funds mainly on payroll – the loans will be forgiven.

Here is a look at how several area companies are putting PPP funds to work.

Bob Cefalu worried about the economic damage the pandemic might cause Partners Packaging, especially his employees.

"Since we opened, I always prided in not laying anybody off, keeping everybody working, feeding all the other families," said Cefalu, one of the partners. "That was my main thing."

Partners Packaging, founded 10 years ago, provides shipping and packaging supplies, wooden crates and janitorial products to businesses. He and his two partners, Andy Kurcsics and Judy Bakowski, feared customer demand might dry up amid the pandemic.

Working with Bank on Buffalo, Partners Packaging got a $115,000 PPP loan. With that squared away, Cefalu could focus on other things.

"We spent a lot of time hunting and pecking to find products that we could get to our customers that were staying open and trying to take care of their employees," he said. "But the PPP part helped me do that and not worry every day, 'How am I going to pay this guy, how are we going to make our payroll, how are we going to keep the doors open?' "

Partners Packaging, which has 13 employees, has its eye on growth. The business has started a loose affiliation with Millennium Construction, whose crews are cleaning facilities that have had Covid-19 issues.

And Cefalu is looking to hire a new salesperson. He wants to follow up with companies that have come to his business for cleaning supplies, to see if he can interest them in buying other products sold by Partners Packaging.

"We still have a hole that we have to get out of," Cefalu said.

Buffalo OB/GYN in Amherst just celebrated its 10th anniversary. Its partners used to work together at a larger practice, but the four women wanted to venture off on their own, so they did.

Buffalo OB/GYN, which has 20 full-time employees, owns its building and has tenants. The business completed a renovation last summer, expanding into more space within the building. 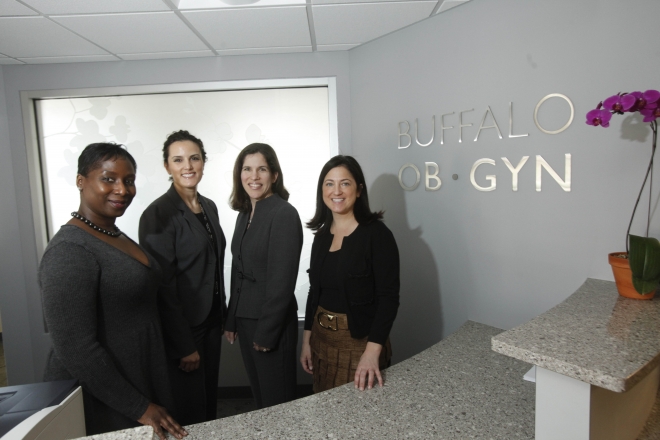 Then the pandemic hit. Buffalo OB/GYN didn't have the option of shutting down, and can't do telemedicine at the same level as some other medical offices.

Anticipating a dropoff in business, Buffalo OB/GYN got a $320,000 PPP loan through M&T Bank. Without it, the practice might have had to lay off employees or cut workers' hours, Gelman-Koessler said.

"At a very minimum, people would have had to go down to 50% of their paycheck," she said. "Most of our workers have been with us the whole way. People who come here very rarely leave. We wanted to support them and seeing a 50% pay cut in any given week is just not sustainable for people."

Revenues dropped about 50% from April, and patient visits declined by about two-thirds. But all the employees remain on the payroll.

"They're still working and still happy to be employed, but we're also taking the added measures to keep them safe," Gelman-Koessler said. "I think both of those things, they really appreciate."

Kurt Amico isn't sure what would have become of MidCity Office Furniture without a PPP loan. He faced the prospect of closing the business, or laying off workers at the very least.

"We would have shrunk to half our size without that loan," Amico said. "It looks like (the loan is) going to get us to ride through this first wave of the pandemic and hopefully we'll be better prepared for what's coming ahead if another wave comes."

MidCity was started in 1970. Amico and his wife, Kathleen Clark, have owned the business since 2005. The office furniture distributor is based in the Tri-Main Center and has 15 full-time employees. That's not counting the five to 25 installers the company uses each day to install furniture for customers.

MidCity got a $200,000 PPP loan working with Northwest Bank. The company had a healthy backlog of orders entering the end of March. Its sales are off by about half now, but Amico said orders are still coming in. Some clients are altering their office settings to safely separate employees from each other.

"It feels like the projects are still out there, as long as the sales people are staying in front of their clients," Amico said. "There's not the extreme panic in our industry that some of the smaller folks might see. I have no idea if I'm ever going to be able to go back to some of my favorite restaurants."

Scott Eggleston has seen a trend.

"With a lot less cars on the road, there's a lot less business," said Eggleston, owner of Carstar West Seneca, an auto body repair shop. "Our sales have dropped off quite a bit."

That means less work for his 18 employees, which could have meant furloughs. But Carstar West Seneca received a $301,000 PPP loan with the help of Evans Bank and was able to keep its employees on board.

"That's a big relief," Eggleston said. "It's a weight off your shoulders. It's huge."

Carstar West Seneca has been around since 2012. Lately, Eggleston has noticed more cars and more people venturing out, although work for his shop remains sporadic.

"Who knows what it's going to look like in eight weeks?" Eggleston said, referring to the PPP's time frame. "Eight weeks may not be long enough."

For some time, Systems Technology Group in Blasdell has offered customers options like mobile and contactless payment and online ordering. But not everyone rushed to use them.

Suddenly interest has spiked, as businesses rethink how to connect with customers.

"We've had these technologies in place," said president Gary Kielich. "And we've had a normal adoption rate. Well, now that's accelerated, because of Covid."

Systems Technology Group provides point-of-sale tech solutions to customers. Amid the pandemic, the business wanted to ensure it could maintain continuity with its customers, and received a $315,000 PPP loan by working with Five Star Bank.

The company, which was founded in 1996, has kept all 26 of its employees. "We're using this time to support our customers and also invest in training for new technologies that were important before but are now super important," Kielich said.

"Everybody wants it," he said. "You have to deliver it. And I don't think that's ever going to change."

Black Button Distilling never imagined it would be churning out hand sanitizer instead of spirits.

The Rochester-based business also has a location on Swan Street in Buffalo. About two dozen of its 83 employees are in Buffalo.

Back in March, Black Button was preparing to temporarily shut down, as a nonessential business.

"As I was talking to my staff about furloughing them, it was really heartbreaking what that was going to mean for them on a personal level," said Jason Barrett, the president. "Then we discovered that we could make hand sanitizer."

Black Button produced 5,000 bottles of hand sanitizer the first week and 35,000 the second week. Now it makes 70,000 of the 24-ounce bottles a week. The company ships about 90% of its product within New York State.

The $300,000 PPP loan Black Button received with help from Live Oak Bank in North Carolina not only allowed the company to retain its staff, but to quickly change up its production.

"We bought six new bottling lines, we had to front the money for all of the materials, while waiting to get paid from our customers," Barrett said. Some of its part-time employees are now working full time on the bottling line.

The PPP loan arrived at just the right moment, he said.

"Without it, I don't think we would have been able to make the investment and ramp up to meet the need to way we have," Barrett said. "For small businesses, it's not just about profit and loss, it's about cash flow. And the PPP was critical for us maintaining that cash flow."

Ted's Hot Dogs was in a pickle.

The company had started a $1.2 million renovation of an Amherst store – one of its most financially important stores – when the Covid-19 pandemic struck and shut down construction.

Meanwhile, the chain, which has 10 locations and about 200 employees, had to swiftly change the way it served customers, due to restrictions placed on restaurants, said Joe Drust, the CEO.

Drust said the PPP loan that Ted's received through KeyBank was essential to keeping things going, especially with a big renovation project underway and during what are typically Ted's best months for sales.

"The loan helped us bridge the gap on getting through those really rough weeks when we were just in a total, 100% cash burn situation," Drust said.