“This station is not only third, it’s a tragic third,” Ron Hunter declared as he came to Buffalo in 1972 as Channel 2’s news director. Within a few months, he’d also grab the news desk from Henry Marcotte, looking to be the face of change on Buffalo television as an anchorman.

“They put tranquilizer after tranquilizer through those film projectors at 6 and 11,” said Hunter, who was going to do something about it.

The 35-year-old New Orleans native put the whole news team on an 8-week probation. Reporter Stewart Dan, who gained national attention for his reporting from inside Attica prison during the inmate uprising a year earlier, was taken off the street and made the weather reporter. Dan joined Hunter and Sports Director Mike Nolan on the anchor desk of “The Ron Hunter Report.” 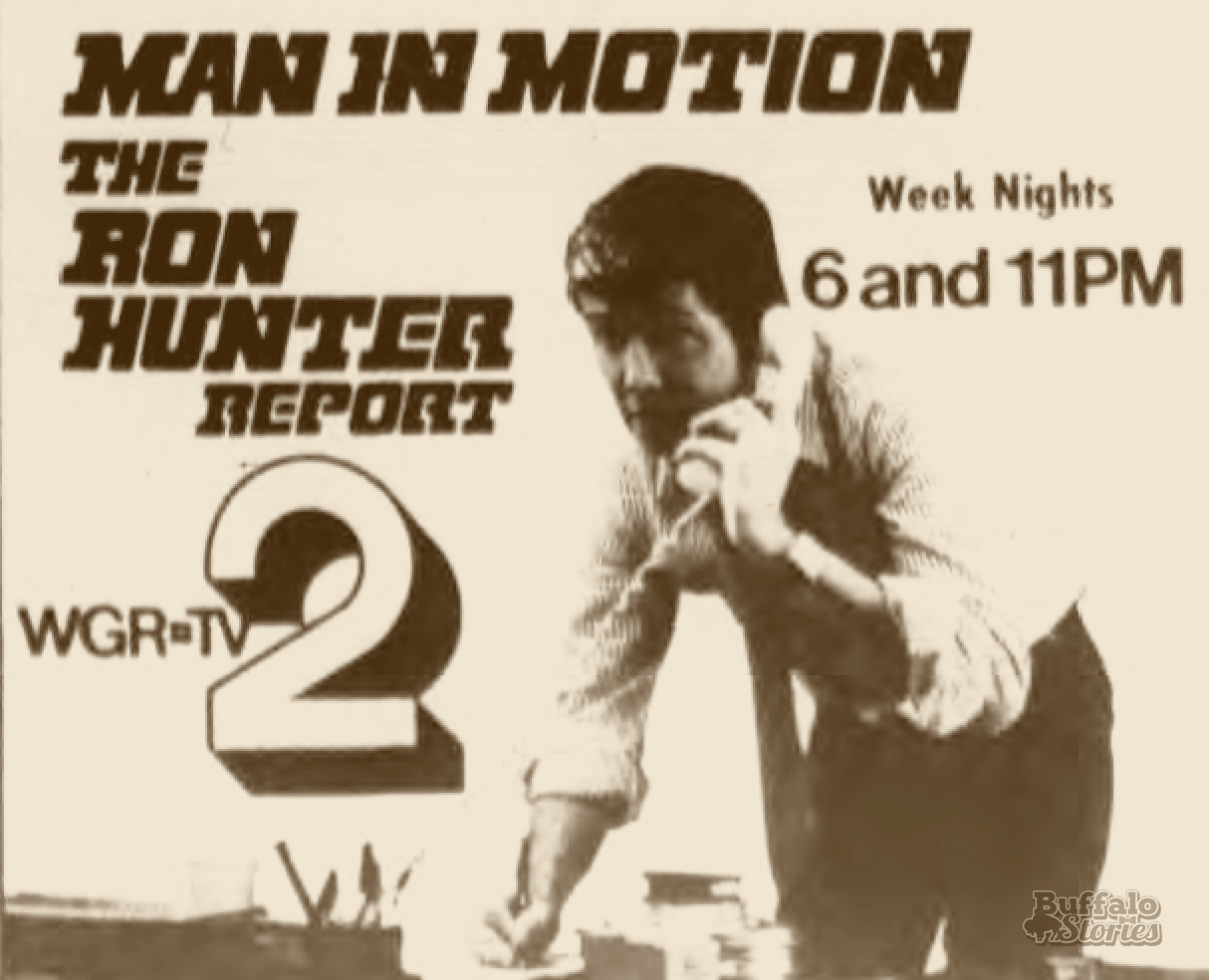 Hunter also brutally sized up his competition, saying that there weren’t many people under 60 watching Channel 4 and that Irv Weinstein’s Channel 7 newscasts “only offered a very superficial run-through” of the day’s news.

He was outlandish, but there was nowhere for Hunter to go but up. In the ratings period before his arrival, the Channel 2 newscasts were in fourth place behind Ozzie and Harriet reruns on Channel 29.

Personnel weren’t the only changes. The graphics on “The Ron Hunter Report” were crude by today’s technical standards, but also viscerally crude by the standards of some Buffalo viewers.

Technically crude, because in much the same way that weather forecasters stand in front of a green wall while maps and other graphics are inserted behind them even today, much of Hunter’s on camera time had the entire wall behind him filled with some graphic representation of the story he was presenting.

Several of those chroma key rear screen graphics left viewers appalled, including the giant blood-stained knife during stabbing news and the drawing of bullets made from dripping blood during shooting stories. 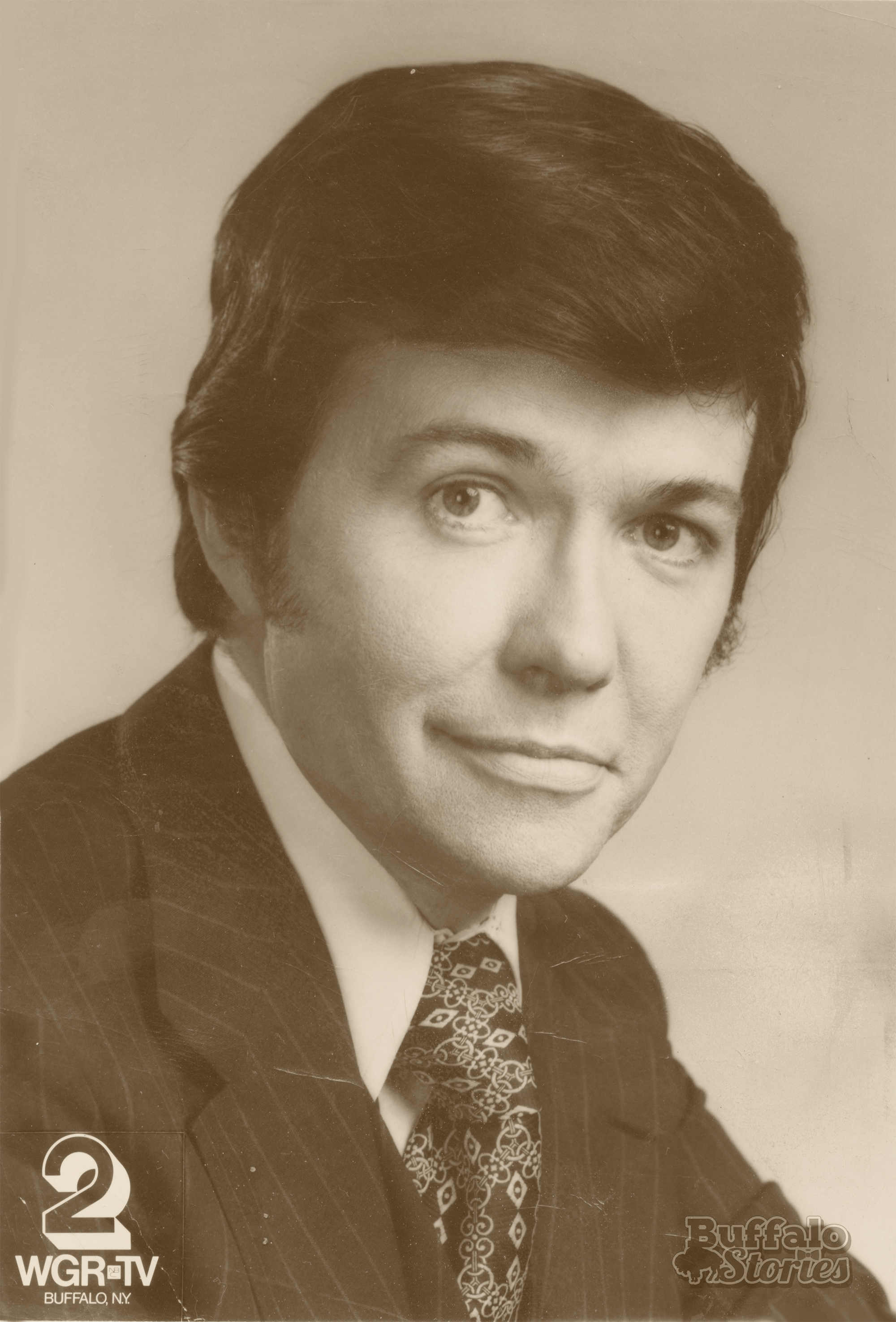 The graphic graphics were made somehow even more off-center by Hunter’s off-center gaze into the camera. The standing order was to avoid shooting Hunter straight on, and to only shoot his “better side.”

A 1974 story about streaking sent Morality in Media into action. Channel 2 cameras were inside the Bailey-Kensington-area Capri Theater, which at the time had live burlesque shows, as well as X-rated films on the screen.

The story showed, according to News critic Hal Crowther, “a giggling team of undergraduate jaybirds running from the camera at full speed.”

“Thanks to Ron Hunter,” said an MIM newsletter, “news of their bumps and grinds wriggled into the privacy of the family hearth … how’s that for an invasion of privacy?”

The film clips put the 1970s fad of streaking – running through some crowded place naked – in the same context as earlier generations' youthful silliness, comparing the nude sprints to activities like flagpole sitting and phone booth stuffing.

Hunter ended the report with the comment, “It’s all just good clean living.”

As quickly as he came to Buffalo, he left. In 1974, Hunter was offered big money in Miami, where he was quickly voted one of Miami’s sexiest men – but also just as quickly demoted from the main news anchor chair. He had quick stops in Philly and Chicago, where he’s remembered more as a caricature than a newsman.

“I get a lot of that sex symbol flack,” Hunter said as he finished up his time in Buffalo, “but you scratch off the veneer of a newsman like me and you’ll find a beat-up newsman. I think I’ve paid my dues in this profession. I’ve covered race riots, hurricanes, all the disasters, and politics.

“I dress in Hickey-Freeman suits and keep up my appearance because I’m a guest in people’s homes on that television screen. But before anything else, I’m a journalist, and I think I’m a damned good one,” added Hunter, who claimed to be nursing an ulcer as he left two years of being overworked in Buffalo.

“He’s a freak ego maniac, but I have mixed emotions about him,” Deeb told the Fort Lauderdale News and Sun-Sentinel. “I guess I like him more than I dislike him professionally. Ron Hunter is a very, very good anchorman and a young superstar newscaster. He’s very well-groomed and very well-dressed. Many people have said he’s in love with himself – it’s not an unjustifiable accusation.”

Deeb wasn’t the last one to notice.

One Chicago magazine called him “a pompadoured pomposity.” A co-anchor remembered him by the laminated business card which said nothing but “Ron Hunter – Anchorman.”

In 1981, he moved back to his native Louisiana, where he fizzled once again as a TV news anchor, and then held a long string of radio talk show jobs.

On a night in 1990 when his in-studio radio guest was a sex therapist, his wife Bunny called the show to complain about their marriage. Later that night, she died of a gunshot wound to the chest. It took weeks for the coroner to rule the death suicide. A few years later, Hunter was arrested for stealing $3.24 in groceries – including a box of macaroni and cheese.

In Buffalo, Hunter did leave a legacy. He hired Ed Kilgore, who would remain at the station for 40 years.

After Hunter’s 1996 arrest, Kilgore remembered his old boss as his own worst enemy, but also a great talent and leader, calling him a “very positive, optimistic, confident guy.”

“He had a big ego, but don’t we all?” Kilgore told Alan Pergament in 1996. “His enthusiasm was contagious and swept the newsroom.”

Hunter also hired Susan King, who became Buffalo’s first evening anchorwoman, taking over the desk for several months when Hunter left, before she was eventually joined by Rich Kellman.

The boost Hunter offered sagging ratings at Channel 2 made sure that Kellman and the team that would follow wouldn’t fall behind reruns for the evening newscasts.

But sadly, if Hunter is remembered at all in Buffalo, he’s remembered as a talent whose flame burned hot and fast, and would have likely been forgotten had it not been for his lifetime of troubles.