Last week, we told you about the challenges of charter captains who were not deemed essential during the ongoing coronavirus pandemic. But it looks like some charter captains and guides will be able to operate in the Finger Lakes, Southern Tier and Mohawk Valley starting Friday, pending reopening plans in some counties, though Western New York will have to wait.

Lake Erie walleye fishing has been good to particularly good once you figure them out, Rob Oram of Franklinville said. He has been picking up two- and three-person limits every day, targeting 15 to 30 feet of water. Fish have been located suspended and on the bottom. The jig bite and blade bait bite are good in those same depths. The action during the day has been slower than the night bite. Oram has been using all stickbaits. The pre-spawn smallmouth bass fishing also has been exceptionally good, Capt. Ryan O’Neill of Orchard Park said. Best depth has been 15 to 25 feet of water around the breakwalls and structure. On Saturday, there will be a road rally of sorts for the Sturgeon Point Marina starting at noon, a support mechanism to get the popular access point open for 2020.

In the lower river, the spring silver bass run was accentuated with a record catch last week by Morgan Fonzi of Gasport, while fishing with his dad, Capt. Joe. Morgan caught a 3-pound, 8-ounce white bass on a five-eighths ounce gold-colored Steelshad blade bait (see Scattershots for more). Good numbers of steelhead are still in the river and bass are not as active as they should be with the cooler temperatures, but still active. From shore, the duo of Mike Ziehm and Mike Rzucidlo from Niagara Falls was still going on despite some turbid conditions last weekend. Casting spinners and jigs, they managed to catch steelhead, lake trout, smallmouth bass and silver (white) bass from shore. Boaters off the mouth of the river near the fort can take smallmouth bass in close or salmon and lake trout a bit deeper using three-way rigs and MagLips or Kwikfish, at least when the winds cooperate. In the upper Niagara River, some bass and walleye are being reported, along with some perch. 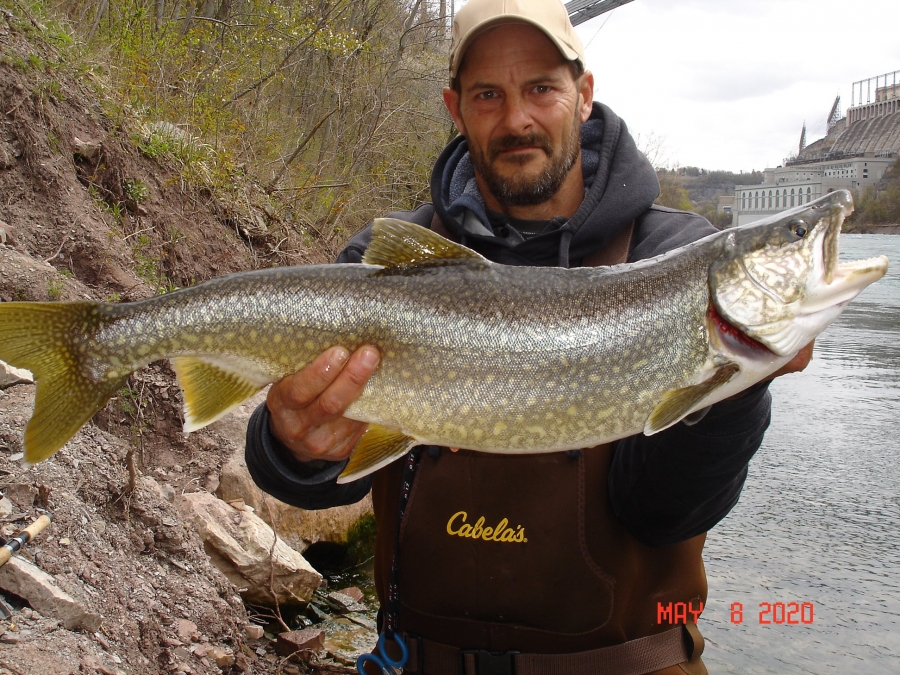 The spring salmon bite continues to be particularly good for trolling anglers from the Niagara Bar to Olcott, according to reports. Karen Evarts at the Boat Doctors says action in front of Olcott has been super from 60 feet of water to 90 feet of water with chartreuse and black magnum spoons. Quite a few kings in the 20- to 25-pound range have been caught. There are good numbers of fish with some lake trout mixed in. Out of Wilson to the Niagara Bar, Capt. Matt Yablonsky of Youngstown reports pretty much the same program in 50 to 100 feet of water with magnum spoons, kings and lakers. Color does not seem to matter. A few fish are being caught on flasher-flies up and down the lake, too. Down to the east around Port Bay and Sodus bay, crappies are still being caught in the shallow water of Port Bay. They like anything bright and will hit small jigs tipped with spikes according, to Chris Kenyon of Wayne County Tourism. You can use your ice fishing jigs. Fish around the three islands on Sodus Bay for pike or walleye. You can either troll or jig the shallow water on the east side of the bay. Anglers are catching pike on the north end of Sodus Bay. Troll from the LeRoy Island Bridge south and stay in 4 to 5 feet of water. The pike will be in the weeds and will hit spoons. Or cast spinner baits towards the shore.

Capt. Mike Sperry of Chautauqua Reel Outdoors reports the walleye bite was good last week but slowed some with the cold weather. Anglers are still getting them in the evening and after dark casting Rapalas, Challengers, Bay Rats, Smithwicks in the 3- to 6-inch range. Trolling in shallow (weed line) early morning and after dark is working, too. Sperry also was getting some reports of fish hitting worm harnesses tight to the weeds in the early to midmorning. The crappie bite is hit and miss, but he anticipates it will pick up with the warmer temperatures headed our way. Water temperature is still in the low 50s. They should be on beds soon.

Inland fishing has been good, according to Nicholas Sagnibene of Ellicottville. Stream levels have been very solid, creating some good fishing and making it tough to choose a stream. The upper Cattaraugus system has been rewarding to the angler willing to put in some time, Sagnibene said. Bottom bouncing nymphs or swinging wooly buggers on warmer or off-color days have been producing some nice fish. Pheasant tails and prince nymphs have been the hot ticket for Sagnibene, mimicking the mayflies that have been active below the surface. With the warmer temperatures slated for this weekend, look for some rising fish in the slower tailouts in the evenings. Hatch life this week should still see some Hendricksons, which are ending. Sagnibene notes that March Browns and Caddis are starting to be seen, and Sulphurs are about a week away. “This is some of the best inland fishing of the year so if your favorite stream is not producing for you, take a drive to fish something new,” Sagnibene said.

Darrin Schwenkbeck of Varysburg reports that he had some good fishing for bass before the cold front that came in last weekend on Conesus. Fishing a small tournament on the lake, he did great when the water was 49 degrees for practice, catching a mix of largemouth and smallmouth bass by cranking rattletraps and jerk baits. Then conditions turned tough when the water temperature dropped to 46 degrees. He had been starting to see some bass starting to make beds last week. Fish could turn on this weekend.