Travis Yost has been involved in the world of hockey analytics for a decade and is part of TSN's Hockey Analytics team. Before joining TSN, Yost was a contributor at the Ottawa Citizen, the Sporting News and NHL Numbers, and he has been a consultant for an NHL franchise. He will be contributing breakdowns on the Buffalo Sabres for The Buffalo News. Follow Yost on Twitter: @travisyost.

For years, it didn't seem likely that goaltender Linus Ullmark would seriously crack an NHL roster. A sixth-round draft pick in 2012, he was taken in the same window as fellow goaltenders Colin Olsen, Francois Brassard, and Marek Mazanec – a trio of netminders with little draft pedigree who have played a combined 31 NHL games.

Ullmark, who played 20 games in the 2015-16 season, made his first real breakthrough during the 2018-19 regular season. He's played 71 games over the last two seasons with a 91.2 save percentage against 2,676 shots faced – a performance good enough to consider Ullmark an NHL regular.

For a player whose contract is set to expire at the end of the season, that’s an important distinction.

That said, our understanding of Ullmark’s true talent is still quite vague for a couple of reasons. First, 2,676 shots faced isn’t exactly a big number. If we looked at just Ullmark’s 5-on-5 performance for a moment – a 92.4 save percentage against 2,500 shots faced – we would expect Ullmark’s save percentage going forward to be from 91.3 percent to 92.9 percent. In other words, that’s the difference between Montreal’s Keith Kinkaid and Dallas’ Ben Bishop. Estimating underlying talent distributions are quite useful, but can be frustrating when dealing with limited samples.

The other factor that gives us a moment of pause: If we looked at raw save percentage, Ullmark holds up reasonably well. He’s 34th overall over the last five seasons, sandwiched among names such as New York’s Semyon Varlamov and Calgary’s Cam Talbot. That 91.2 save percentage means Ullmark has been about three goals better than the league average stop rate over that span: 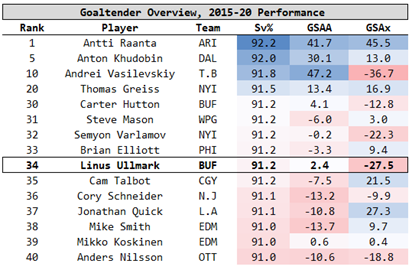 You will notice in the far right column a big negative number next to Ullmark’s name. That’s goals saved above expectations, or our assessment of how well goalies have performed against their shot profiles when adjusted for shot quality. Because Ullmark has faced a slightly easier shot profile than the average goalie, his “average” save percentage doesn’t look as impressive.

Attempts to quantify shot quality are important – if you can realistically calculate what shot angles, distances, shot types, etc. mean for the probability of a puck finding the back of the net, you can start to separate defensive performance from goaltender performance. In the case of Buffalo – and particularly this season – that is important.

The Sabres, for all their flaws, are seventh in 5-on-5 goal differential against. A lot of it is because of their ability to push shooters outside of the low slot. Consider this shot map (via HockeyViz) as a quick example to help in the evaluation: 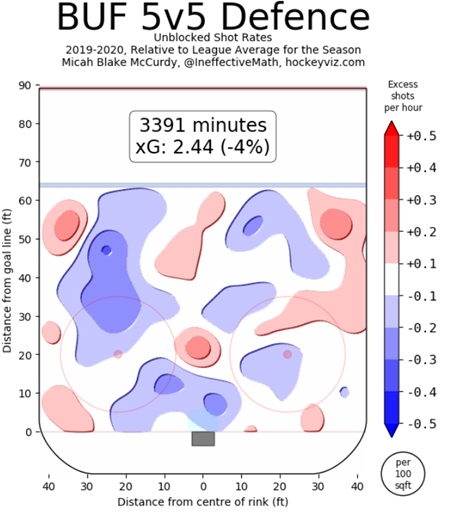 This is important context for a Sabres team that needs to make a decision on Ullmark. Is he a “tweener” goaltender looking for a window to win a starting job, or are his stop rates marginally padded by higher shot volumes and lower shot qualities against?

Ullmark made $1.3 million this season, and under normal circumstances, he would be looking for a raise – the type of raise that might force Buffalo to consider cheaper internal options, such as Jonas Johansson in Rochester. Other unrestricted free agents such as Winnipeg’s Laurent Brossoit might also be worthy of consideration.

But the current economic landscape – and the real threat of a salary cap that is going to decrease next season – will hurt Ullmark’s bargaining power. Add that to the fact that the struggling Carter Hutton has only one year left on his deal, and a little security with a goaltender who has shown signs of promise in Buffalo might make sense for General Manager Jason Botterill.

At the right price point, we could see the Swede return to the Sabres' net next season.