What do Lebanese and Italians have in common?

The cuisine connection flared in my brain as my nose got accustomed to the aromatherapy of bearing a carload of Niagara Falls’ best takeout back over the Grand Island bridges to a table 45 minutes away.

On a recent Friday, my route was drawn from the past. Three Niagara Falls restaurants that had previously caught my attention were carrying on in a takeout capacity. 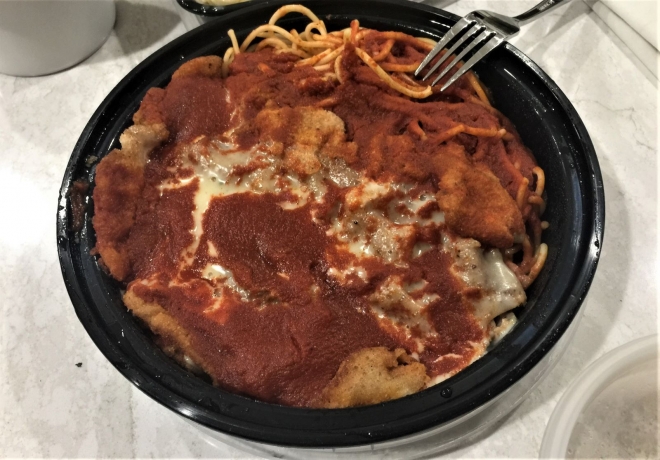 Fortuna’s (827 19th St., 282-2252) has an old-fashioned pasta focus that brings all the customers to the street outside its restaurant. Teams of masked runners transferred bags to trunks with aplomb.

Pasta is made for time-shifted meals. Veal parmigiana ($31), classic broccoli-Bolognese-beans combination ($20) and shrimp scampi ($25) were just as appetizing the next day as they were an hour later. This stuff rejuvenated well on repeat. Squeeze a lemon over those chubby crustaceans to brighten up the chopped garlic embedded in the noodles, and it might be even better the next day. 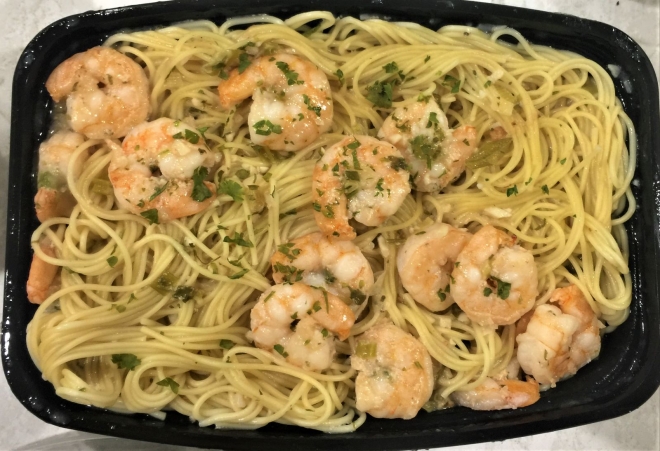 Fortuna’s does veal parmigiana as well as anyone in these parts. Thin-cut cutlets crumbed and pan-fried to a tender golden brown are topped, as is Fortuna’s way, with American-ish melty cheese, not just mozzarella.

Packed over spaghetti and sauce, its work reheats like a dream, and made a splendid second meal the next day with the homey, satisfying chicken pastina soup that came on the side.

Taking over from Macri’s in 2014, the Mehri family started offering Lebanese standards that stood out. I've never been to Lebanon, but I can testify that 755 offers more compelling versions of hardcore Lebanese basics like tabouli (parsley, mint, tomato, scallion, bulgur wheat, lemon, olive oil) than anyplace I’ve found in the 716. 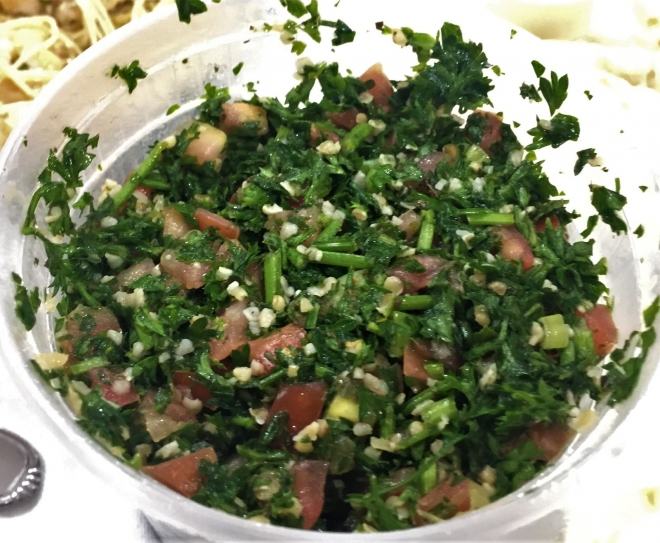 After enduring so many weak, watery versions of tabouli, 755’s is a revelation. Buy it by the quart ($11) for a vitamin blast you can keep in the fridge.

My contactless pickup reinforced my belief that 755 is a number Niagara Falls eaters ought to have. 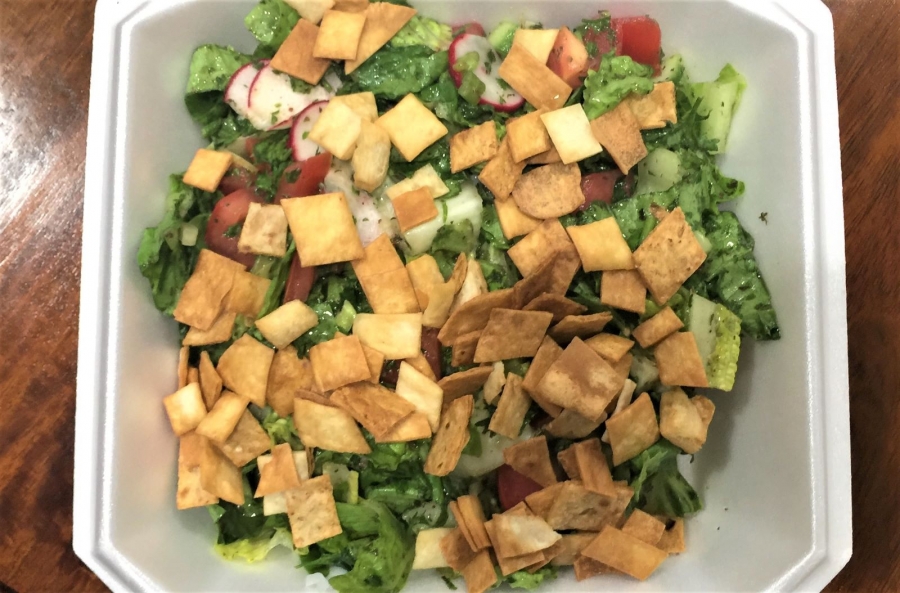 The fattoush is simply enchanting. Chopped romaine salad with cubed Persian cucumber, red onion, mint and whatnot in an olive oil and fresh lemon juice glaze, topped with fried pita squares. This is the sort of salad that makes people say, “Maybe I could go vegan.”

If you’re already vegetables-only, note that 755’s hummus and smoky eggplant babaganoush are definitive enough to merit investing in a large ($6 each), or you can get dabs as part of the vegan sampler ($10), along with falafel and fried cauliflower.

Depending on your quarantine partners, consider asking for extra toum, the pungent garlic sauce, along with the lemony tahini dip. (At home, you can thin it out to desired strength with mayonnaise, Greek yogurt or sour cream.)

Kabobs of beef, chicken, lamb, and kafta, spiced ground beef ($11-$16 with sides) take a toum dunking well. Kibbe, little footballs of chewy fried bulgur with spiced beef fillings ($6/3) make a diverting snack, too. The baklava cheesecake was all gone, however. 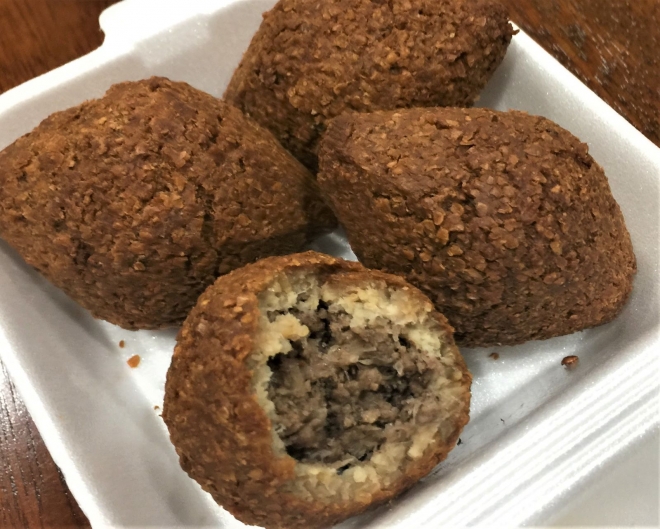 There was no way I was going to Niagara Falls for takeout and not stopping at my most-visited restaurant in the Cataract City.

Michael’s Restaurant (3011 Pine Ave., 282-4043), is for sale after 60 years. In the meantime, the good news is that I could detect no difference in its standard-bearing dishes.

To me, the deep-fried calzone ($16.45 with one topping) represents one of the highest achievements of the pizzeria arts. Wrapping pizza dough around a payload of seasoned ricotta, mozzarella and assorted pizza toppings, sealing the package, and laying it down to rest in the deep-fryer should earn you some sort of diploma. It’s certainly earned my everlasting respect, served up with a cup of Michael’s oregano-forward tomato sauce for dunking. 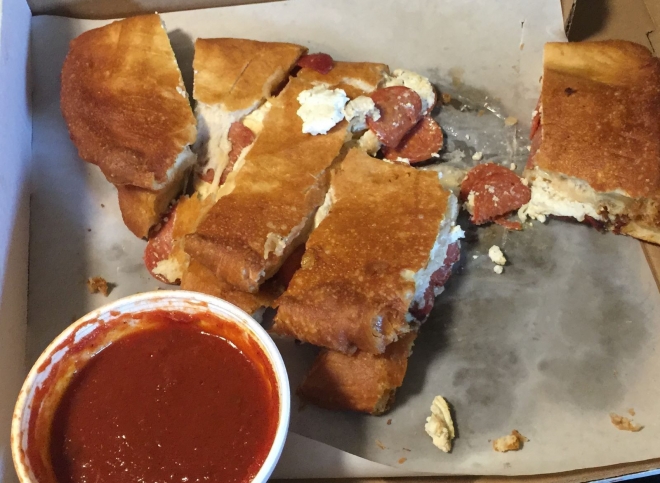 Two days later, it perked up well in a 450-degree oven, proving once again that rejuvenation potential is one factor the sturdier Buffalo-gauge pizza doughs have over their Neapolitan-style cousins.

What about the beans and greens, though? Michael’s soothing mélange of white beans, copious greens, garlic, onions and lots of romano cheese is Mediterranean-inflected cucina rustica at its finest. At $4.50 a pint, there isn’t much better eating you’ll find under $5. Get two and crack the other one with bread at the ready.

On the way back to my table with my loot, I gave thanks that Niagara Falls offers proven comforts as well as new favorites. Marinating in a cocoon of garlic perfume, I mused that maybe the old tourism slogan had it right: There’s magic in the mist.