Balancing the demands of the kids' home schooling.

Dealing with the commotion in the backyard.

That's the new normal for people working from home – a new experience for many as workers learn new ways to stay on the job during the coronavirus outbreak.

As these Buffalo Niagara workers discovered, it takes discipline. It takes patience and it takes adaptability to keep working outside the often sterile and predictable office environment.

Here are some of their stories.

Marissa Wilson, communications manager at Perry's Ice Cream, has upgraded to a corner office. From the desk and chair she has pushed against a window in her bedroom, she has a view of her driveway on one side and neighbor children playing on the other.

Usually, it's her husband, Adam, who works from home but, since the coronavirus stay-at-home orders, they've switched places. With his screenprinting business shut down, he has taken the lead home schooling their two children, 7-year-old Bretton and 5-year-old P.J.

At lunchtime, though, Marissa heads downstairs to give Adam a break. She leads the kids in "gym class," a game of soccer, a bike ride, drawing with chalk on the driveway.

"Anything to get us out of the house, out in the sun where we can see nature," she said.

An extrovert by nature, working from home is a challenge for Marissa.

"Not having those usual watercooler conversations, I miss that. I need that," she said.

So, in addition to the usual video business meetings, she set up a virtual happy hour for her marketing group at the end of the day Friday to allow everyone to catch up on life in general.

Meanwhile, husband Adam has taken on another role around the house: that of P.J.'s and Bretton's barber. He used to cut his friends' hair in college, after all.

Working from home poses its own hazards.

Cynthia Eberl-Lawicki slipped on a hardwood floor inside her Orchard Park home, fell, and fractured her arm. Her husband and daughter made sure she got medical treatment.

The mishap hasn't stopped Eberl-Lawicki, director of account management for Independent Health self-funded services. She had her arm in a sling but now only needs it occasionally, and she is still working at her computer. Eberl-Lawicki has found Microsoft Outlook's dictation feature useful and has shared the discovery with her co-workers.

Working from home means not having to drive back and forth to Amherst. But Eberl-Lawicki misses being able to walk across the office and chat with a co-worker.

She and her team members are staying connected through video conferences. At first, her co-workers were self-conscious about their appearances onscreen. They're past that now.

"You're definitely seeing people let their guard down, because they kind of have to," she said.

The outbreak also has upended Eberl-Lawicki's plans. As Covid-19 was hitting the Buffalo area in force, she and her daughter were set to take a long-awaited Caribbean cruise.

"So instead of leaving on a ship, I was sitting home working," she said.

Chandra Hoyt thought she had prepared for everything before her latest Zoom conference call with colleagues.

Hoyt, a real estate agent with Howard Hanna Real Estate Services, has been working from her Clarence home for the last few weeks.

She and her husband also have three boys – from fifth grade to high school – and three dogs in the house. So she's had her hands full trying to manage them and maintain decorum – especially when she's on a video call. 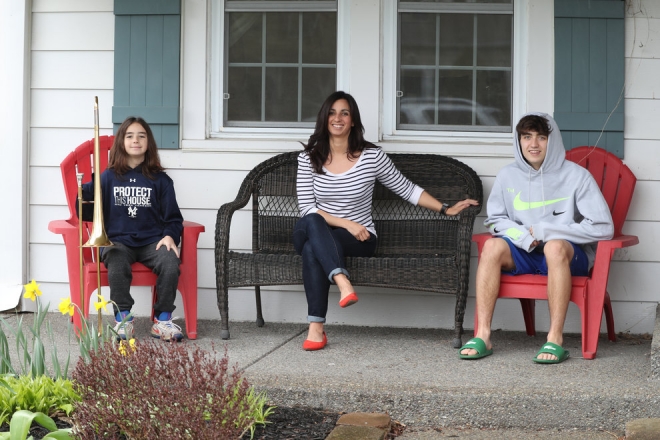 Chandra Hoyt poses for a photo on her front porch with her sons Noah Weber, 10, and Nathan Weber, 16. (James P. McCoy/Buffalo News)

One day, her oldest son got out of bed around 11 a.m., and walked by her computer screen without a shirt on. "My whole office just saw him," Hoyt said.

She keeps a daily Facebook diary, and has occasionally resorted to doing her meetings in her bathroom. On the 16th day of working from home, she wrote about gathering her boys together prior to a pair of Zoom calls, and pleading with them "to put on pants ... and not wrestle during my meeting." But she still ended up muting herself three times during a sales meeting "because the boys were having a contest of who could burp their full name."

During another Zoom sales meeting with 20 to 30 other Hanna agents, Hoyt heard this deep booming sound from the next room, going down in pitch. It was her fifth grader, practicing scales for an online lesson for his band teacher at Harris Hill Elementary School. One of her colleagues interrupted the conversation, saying, "Did someone hear a trumpet?"

"No, it was a trombone," Hoyt replied, sheepishly.

"That's the lesson for anyone working from home with kids. Mute your mic all the time," she said.

Let's get the jokes out of the way: Yes, lawyers are essential.

Colligan Law partner Matthew Pelkey, 35, of Buffalo's Parkside neighborhood, is one of them. Though courts are closed and lawsuits are on hold, the full-service business firm has plenty else to handle: bankruptcies, new federal funding, labor issues. 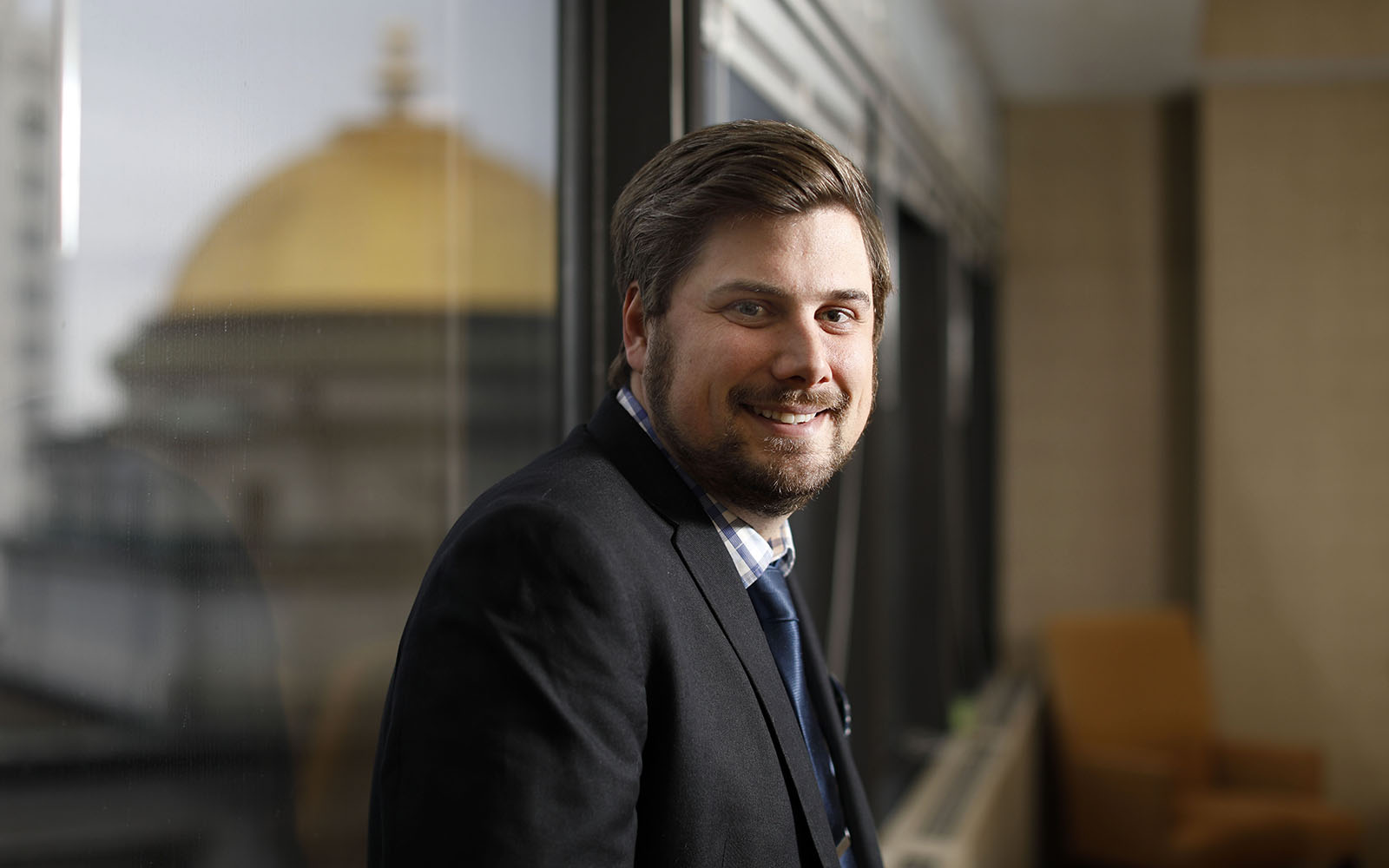 So far, Pelkey likes handling that stuff from home.

Still, his wife, Amber, has a few complaints.

"We learned relatively quickly that my voice carries more than hers does," he said. "With both of us working from home, we've had to buy a white noise machine so she doesn't end up killing me."

His three dogs, Chewy, Louis and the News, regularly make guest appearances during his Zoom sessions, making things "awkward and hilarious," he said.

"They jump on my lap or on my back in the middle of a call," Pelkey said. "They've provided a fair amount of comic relief for people on the other end."

Jill Pawlik and her family had a close-up encounter with the wild the other day that reminded her of growing up in the woods of northwestern Connecticut.

Pawlik, the senior marketing manager for Uniland Development Co., was working in the sunroom of her family's Lancaster house, which overlooks Como Lake Park. She was on the phone with her boss, Uniland Vice President Carl Montante Jr., when some movement outside the window caught her eye. 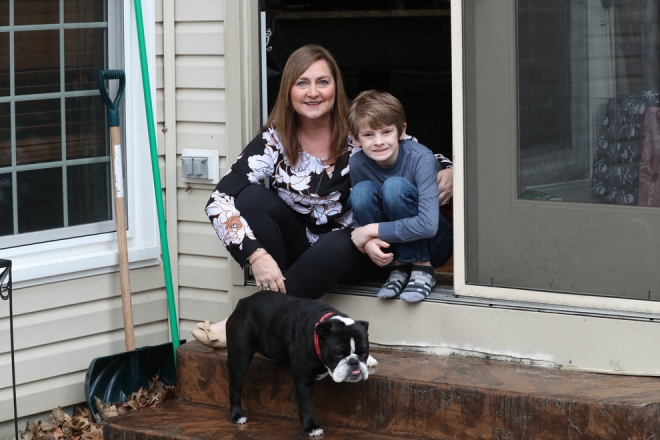 "I look up, and there's this huge raccoon stumbling through the woods," Pawlik said. From her youth, "I know that's not a good sign, because they're nocturnal."

So she calls her kids over, since "they've been raised in suburbia, and haven't seen a real live raccoon."

Then someone shows up in the woods, chasing and shooing the raccoon, with a big stick. She wondered initially if he might be trying to just dump off a pet, but then realizes that "he's trying to get rid of the raccoon, push it in another direction for another reason."

"So I'm giving Carl this play-by-play, and my kids are looking out of the window," Pawlik said.

The animal finally "ambles out of our line of sight," behind a neighbor's house.

"Then we hear two loud gunshots, and I was still on the phone with Carl, and I said, 'What was that?' " Pawlik said.

Her husband, who injured his leg in a skiing accident in early February and is still awaiting surgery, was in the home office. "Like a bat out of hell, he comes hobbling out, hopping on one good foot," Pawlik said, laughing. "He was really freaked out."

Pawlik said the event caused "a big to-do in the neighborhood," with others thinking there were fireworks.

In fact, the Erie County sheriff's deputies were on the scene, and "as they say in police terms, they dispatched the animal," Pawlik said, noting the likelihood of rabies. "It didn't end up good for Rocky."

The real estate investor and developer was getting an "amateur home" cut last week, using "an old pair of cordless clippers," and "all seemed to be going as planned."

He said the left side of his head was cut neatly, while the right side was being trimmed. That's when the clippers gave out. The battery had run out.

But there was a problem: He couldn't find the charger anywhere.

Since then, he's been doing his business calls on Zoom while "sporting a mullet."

But he's taking it in stride. "I am thinking of doubling down and growing a rat tail," he joked.