The Girl Scouts have more cookies than they can sell amid all the pandemic restrictions. Dairy farmers have too much milk. And food pantries are seeing a surge in demand.

It was just the meal ticket that helped stock two food pantries.

The milk and cookies project, initiated by Noco Energy Corp., came with a simple idea behind it.

"It was very much of a pay-it-forward kind of thing," said James F. Dentinger, president of the Noco Enterprises division.

Through donations from employees matched by Noco President James Newman, the company bought over 600 boxes of cookies from three Girl Scout troops and 600 gallons of 2% milk from Upstate Farms.

Noco then arranged to deliver the cookies and milk to FeedMore WNY, the Kevin Guest House and the Tiger's Den Food Pantry.

Dentinger said the idea came out of the Covid-19 response meetings Noco has held during the outbreak. There, attendees regularly brainstorm how best to help the community, and executives contribute to a fund for Covid-19 charities matched by the corporation.

At a recent meeting, Vice President Mickey Zablonski reported getting a call from a Girl Scout leader saying her troop had a lot of cookies they couldn't sell. Restrictions intended to limit the spread of the coronavirus had shut down offices, retail shops and other businesses where Girl Scouts do much of their cookie selling just as their selling season was to have gotten underway.

The Noco team decided to buy 500 boxes combined from that troop in Pendleton and a second troop in the Southtowns, Dentinger said. The company later bought 200 more boxes from a third troop in Buffalo.

"They really helped us out by purchasing our remaining cookies, and we were thankful they were being donated to food pantries," said Alexandra Kuhns, troop leader of a Girl Scout troop in Pendleton that sold Noco 337 boxes.

The chance for the troop to sell its remaining cookies in one fell swoop was a jolt of good news, she said.

The company paid the $5 retail price and ended up with about 12,000 cookies.

The cookie boxes were stacked up at Noco waiting to be delivered, with no one in the company allowed to eat them.

The cookies, however, needed something else. Debbie Coder, another Noco Energy vice president, suggested buying milk.

Noco delivers diesel fuel and propane to farms in the area, so employees had heard about dairy farmers forced to dump milk because many of their large customers, such as schools and restaurants, aren't open. 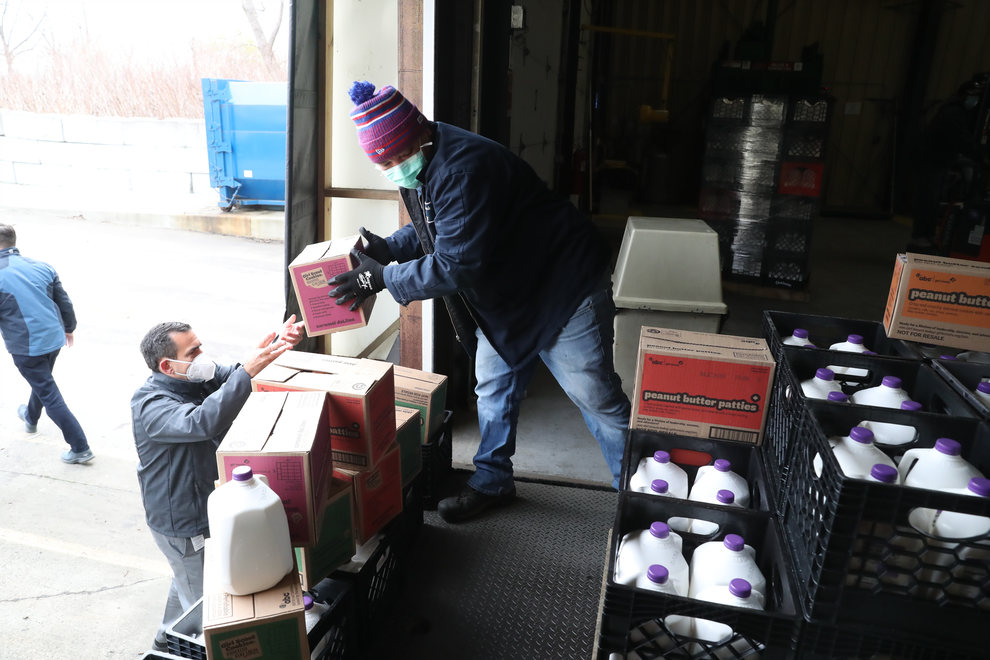 So the company reached out to the Upstate Niagara Cooperative and agreed to spend $1,500 on 600 gallons of 2% milk.

"It was an excellent gesture," said Joe Vitello, the cooperative's regional sales representative.

On Friday, Noco employees, with all of the cookies loaded, met an Upstate Farms delivery truck with 600 gallon-size containers of milk at the FeedMore WNY food bank warehouse on Holt Street. Half of the milk and half of the cookies were delivered there.

The Kevin Guest House, which hosts families of patients coming to Buffalo for critical care, and the Tiger's Den Food Pantry at St. Paul's Lutheran Church in Eggertsville will split the rest and receive their share through Saturday.

At a time when the coronavirus is upending daily routines, Dentinger said there's something comforting about the combination of milk and cookies.

Laurel Riefler Bond sent 100 boxes of Thin Mints, 100 Tagalongs and 50 boxes each of S'mores and Samoas to the USS Nitze, a naval ship now patrolling the Atlantic Ocean.

"I felt like we need to do something good in this whole mess that we are in during the Covid-19 quarantine," Bond said.

One of her three children, Jarrett Almand, a 27-year-old second class petty officer, is stationed on the ship.

"Sending Girl Scout cookies out to sea to the sailors on my son's ship was a small way to say thank you for supporting and defending our nation during these difficult times," Bond said.

Bond said her son was called down to the mail room about three weeks after the cookies were ordered and angrily told to remove a large pallet. The mood, her son told her, quickly brightened when the contents were learned. The pallet was moved to the mess deck, where the sailors enjoyed their treat.

"Jarrett said they came into the room and everyone just grabbed them," Bond said. "It was awesome that they could have the cookies and just have a good time."

"In these uncertain times, it's rewarding and feels good to do something for someone else," she said.

Mark Sommer– Mark Sommer is an enterprise reporter and former arts editor at The Buffalo News. He writes about an array of subjects, including development, the waterfront, transportation and culture.