Sean McDermott gets a kick out of what has become an annual tradition in the NFL: Grading draft classes the moment they are finalized.

“I know everyone wants to say was this a good draft class or was it not a good draft,” the Bills' coach said last week. “There's grades out there. I always laugh that the day after the draft or the night of the last pick of the draft because someone puts out their draft grades and then the next person puts them out. I think that's part having fun with it, right? We won't really know … for multiple years between what happens from the time they're picked to how they develop.”

That’s especially true this year. With no spring practices due to the coronavirus pandemic, rookies face a steep learning curve when teams eventually get back on the field.

“There's a long runway for all these rookies,” McDermott said.

So, what’s reasonable to expect for each of the Bills’ draft picks in 2020 (assuming they stay healthy, as do the players ahead of them on the depth chart)? Here is a floor and ceiling for each:

Ceiling: That depends on two things: No. 1, what the Bills decide to do with Trent Murphy, and No. 2, Epenesa’s performance. If the Bills decide they are ready to move on from Murphy, Epenesa’s expected playing time would increase a good deal. Or, if the Iowa product proves he deserves to be on the field more, he could see more than 50% of the snaps. 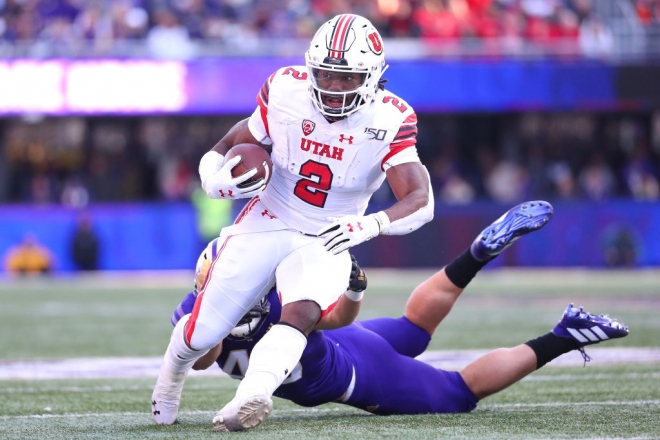 Utah's Zack Moss joined the Buffalo Bills as a third-round draft pick. It's expected he will be the Bills' No. 2 running back. (Getty Images)

Floor: Like Epenesa, Moss is a guarantee to make the 53-man roster. That’s where the guarantees end, though. The Bills’ expected depth chart at the position heading into training camp is Devin Singletary, Moss, T.J. Yeldon, Taiwan Jones and Christian Wade as the top five at running back. While it’s expected that Moss will be the No. 2 running back,  Yeldon could possibly win that job. Jones appears locked in as the No. 3 running back whose primary contributions come on special teams. That puts Moss’ floor as a healthy inactive on game days. That’s unlikely, but possible.

Ceiling: Moss figures to start as the No. 2 running back, but he showed in college he can handle a heavy workload. He averaged more than 18 carries per game in his final two seasons at Utah and can handle contact. According to Pro Football Focus, he was eighth in yards after contact (1,042) among all running backs last season. Can he overtake Singletary as the primary running back? Again, that is unlikely, but possible.

Floor: As a fourth-round pick, Davis is pretty much a lock for the 53-man roster. In what promises to be one of the more intense positional battles, the 6-foot-2 Davis will have to show the Bills he’s worthy of a spot on game days. He can do that by bringing something that was missing to the offense last year – a legitimate big target for Josh Allen who can help in the red zone.

Ceiling: The Bills’ top three receivers – Stefon Diggs, John Brown and Cole Beasley – are set in stone. Davis’ ceiling is the No. 4 receiver, active on game days. Last year, the Bills’ No. 4 receiver in terms of playing time was Robert Foster. He played 20% of the offensive snaps. That’s the role Davis will be competing for.

Floor: No. 3 quarterback. By the nature of his position, Fromm has more roster security than a fifth-round draft pick normally would. If the Bills wanted to put Fromm on the practice squad, he would be exposed to waivers at final roster cuts. If he shows even the slightest bit of potential during training camp, that’s a risk that the team won’t want to take.

Ceiling: Backup quarterback. Fromm won’t have a lot of time to show he should replace Matt Barkley as the No. 2 quarterback behind Josh Allen, but the possibility exists.

Floor: Cut. Bass will be part of a competition with Stephen Hauschka for the team’s primary place-kicking job. If Hauschka wins, Bass could be cut. If that happens, though, it doesn’t necessarily mean his time with the franchise will be over. The Bills could put Bass on the practice squad, which expands to 12 players this year. They would then be able to bring him up to the active roster and return him to the practice squad twice without exposing him to waivers. The Bills could do that for games they wanted to use a kickoff specialist. He kicked touchbacks on 198 of 268 kickoffs (73.9%) in his college career, including 55 of 72 kickoffs (76.4%) last season.

Ceiling: Pretty simple – the Bills cut Hauschka and go with Bass as their place kicker.

Floor: Cut. The Bills’ previous sixth-round draft picks under Brandon Beane – receiver Ray-Ray McCloud and safety Jaquan Johnson – were on the 53-man roster throughout their rookie seasons. Hodgins, though, faces a lot of competition to do the same. If Davis joins Diggs, Beasley and Brown as roster locks, the 6-4 Hodgins will compete with Foster, Isaiah McKenzie, Duke Williams, Andre Roberts, McCloud and Nick Easley for one or two jobs. Good receivers aren’t going to make the roster in 2020.

Ceiling: Same as Davis – No. 4 receiver. In many ways, the two drafted receivers will be angling for the same spot. The deciding factor could be which one of them can make a meaningful contribution on special teams.

Floor: Cut. It was telling that Beane said he had several players with similar grades, but chose Jackson in the seventh round because he felt like the Pitt cornerback had the best chance to make the team. That’s reasonable when looking at the depth chart. The Bills have been relatively light at cornerback in past seasons, though, so it remains to be seen whether five or six make the active roster. If it’s five, Jackson might be on the outside looking in. He would then be a prime candidate for a spot on the practice squad.

Ceiling: Backup on the active roster. The Bills have six cornerbacks listed on their roster, although Siran Neal is classified as a safety and none of the team’s reported undrafted free agents is listed (Florida International cornerback Ike Brown is among them). Nevertheless, Jackson would be ahead of them on the depth chart as a draft pick. There is a clear path to Jackson being the No. 4 or No. 5 cornerback on the roster that would require him to beat out a veteran like E.J. Gaines.

News' writers give their grades for the Bills' draft