Walleye season is open, but the weather is not cooperating. Capt. Joel Ruggiero of Angola was fishing the opener with Scott Spier of Springville and they found some walleyes in a relatively small band of water depth. They had to weed through the smallmouth bass and lake trout. The 35-foot depth mark was best for walleye between Van Buren and Lake Erie State Park. If they hit the 20-foot mark, they hit bass. If they trolled deeper in 45-50 feet of water, lake trout bit their lures. The hot walleye rod was two colors of lead core line with stickbaits.

Justin Wekenmann reports good action during the day slow trolling with stickbaits in 15 to 20 feet of water. They caught a three-man limit opening weekend. Some anglers have been jigging up some walleyes with blade baits, as well as jigging raps. Night fishing for walleye has been hot and cold depending on the night according to reports up and down the lake. Use stickbaits.

Brad Brodnicki of Buffalo reports bass fishing is starting to pick up in the lake. His best fishing was in 15 to 25 feet of water. Fish have been moving out of their winter haunts and are starting to stage in spawning areas. Look for any kind structure like rock piles or sharp drop-offs.

Jeff Pippard at Niagara Outdoors in North Tonawanda reports that perch are doing well off Sturgeon Point and off Cattaraugus Creek in 45 to 60 feet of water. You do have to work for them though. Steve Brzuszkiewicz of Marilla was one of those guys that worked for them, running to Sturgeon Point in 60 and then 55 feet of water, found some in 50 foot off Evangola but not enough for dinner. He ended up in 55 to 58 feet of water off the Catt to finish off his dinner.

Speaking of Sturgeon Point, it is looking more and more like the marina and launch will not be open this season due to fiscal concerns. With the cooler temperatures around this past week, there have been a few steelhead still hanging around in the tributaries. Some bass are active, too. 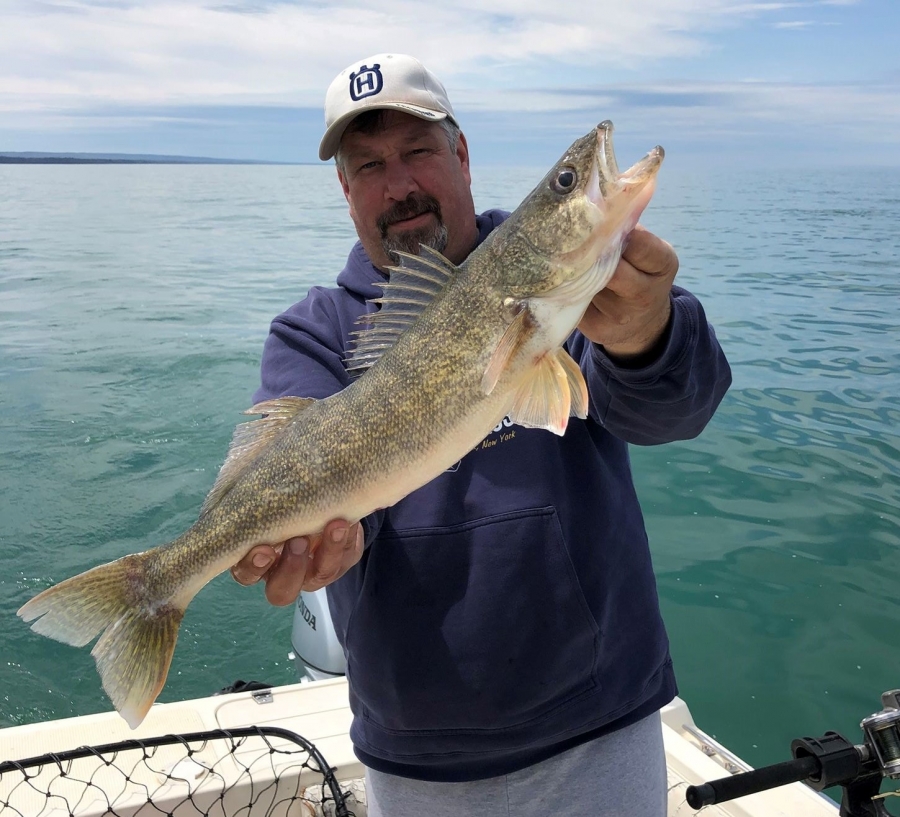 In the upper river, Jeff Pippard with Niagara Outdoors reports that walleyes were hitting at foot of Ferry Street in Buffalo; a good evening bite is on. Catch and release smallmouth bass action is being reported on artificial lures like ned rigs, swim baits and crankbaits in the east river. If you fish in Canadian waters, make sure you have a Canadian license. You can venture over into those waters to fish, but you are not allowed to touch the shoreline. Lower river action has been decent for a mix of trout and smallmouth bass. For the trout, shore casters are using spinners, jigs and egg sacs or imitations. From boats, shiners or MagLips and Kwikfish are hitting trout. If you want to target bass, use Strike King tubes and Ned rigs.

Mickey Grant of Virginia was in town last week to field test some of his new Rapid scent keeper jig heads that are placed inside the tubes with scent on the soft, absorbent material. Fishing with Pat Duncan, they caught an impressive number of smallmouth bass in the lower river toward Lake Ontario.

Capt. Frank Campbell of Lewiston had his kids out for some salmon and trout fishing on the Niagara Bar. They were drifting three-way rigs to catch a mixed bag of salmon and trout that included numerous king salmon and lake trout. Fish up higher in the water column for Coho salmon. Campbell was using MagLip plugs in his three-way setup. Before he put them out, though, he used Atlas Mike’s alewife scent on the lures and it really made a difference. As an experiment he ran scent on some lures and not on others. Nearly every fish hit the lures with the scent. 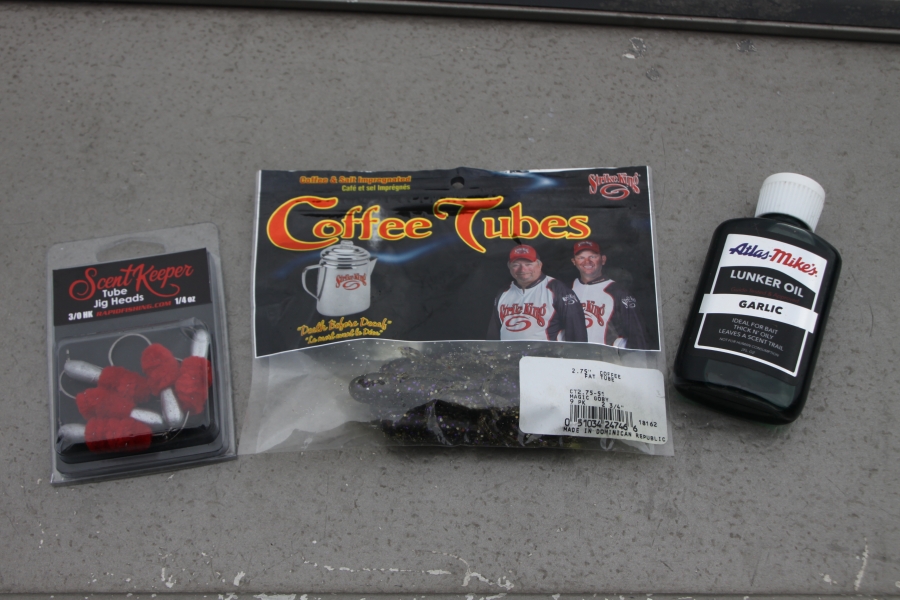 Capt. Mike Mongan of Grand Island went out with his fishing buddy Walt Zebker and they caught a bunch of king salmon while social distancing. Overall, they put 13 kings and 10 lakers into the boat. They focused their attention right in front of Wilson in 90-120 feet of water. Magnum spoons did the trick along with a few on flasher/flies.

Capt. Joe Oakes of Salmonboy Sportfishing reports that the fishing remains good between Wilson and Olcott. Lake trout seem to be thinning in numbers, but the king bite is hot according to Oakes. Everything was working, including spoons, sticks and flasher/fly programs. The water has changed a lot over the past few days as there is warmer water now then just five days ago. This has caused there to be kings seemingly everywhere in 60 to 120 feet of water.

Scott Rohe of Cheektowaga had another great day out of Olcott last weekend going 14 for 21 on fish, mostly salmon but some lake trout, too. Action was in 60 to 90 feet of water, using mostly spoons. They caught a few on flasher and fly. Remember your social distancing and do not put too many people in a boat. 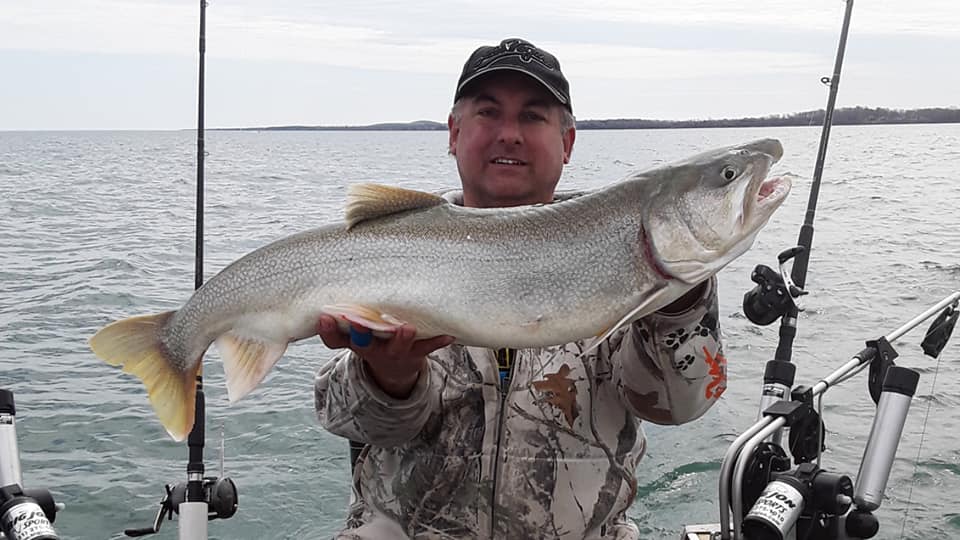 Scott Rohe of Cheektowaga caught this lake trout while salmon fishing out of Olcott in Lake Ontario. (Photo courtesy of Scott Rohe)

Capt. Frank Schoenacker of Infinity Charters was fishing solo for the opener, so he was only looking for fish for dinner. He ran from Long Point to the South Basin with 52-degree water. His first pass produced an 18-inch walleye in 8 1/2 feet of water then did a 20-inch fish on the second pass same depth. The fish came on butterfly blades in a little of over an hour between 3 and 4 p.m. He shared this tip for the cold water: “I pinch the tail off on my crawlers, so I have 1/2 to 3/4 of the worm on my rig. The fish can get to the hook quicker on a light bite. Looks like we will have some nice fish on Chautauqua this season.”

Capt. Mike Sperry of Chautauqua Reel Outdoors reports that the walleye bite was on with most fish nailing stickbaits either slow trolled shallow after dark or casting. F9 and F11 Rapalas, Challengers, shallow running Bay Rats were working well. Several fish were caught vertical jigging with Jigging Rapalas in the north basin. Some reports of crappies out in the lake near the spawning beds. He notes that the spawn will probably be delayed some with the cooler temps this week. Lots of good-sized perch to go after, too. Fathead minnows under a slip bobber is the best approach.