My father died 25 years ago today.

He lived a quintessentially Buffalo life, from his beginning (in Black Rock) to his end (at Sisters Hospital). He could see, from his deathbed, the home on Humboldt Parkway where he grew up and the golden dome of the college to which he devoted his life.

He was born on April 15, 1912, at the approximate moment of the sinking of the Titanic. He liked to say this determined his bent toward epic subjects.

“It would be Horatian, if not precisely flattering,” he once wrote, “to say that a whale groaned in mid-Atlantic and, on the American side of Lake Erie, a minnow was born.”

That minnow grew to be a big fish in literary circles. Charles A. Brady was a professor and poet, critic and caricaturist, novelist and essayist. And he spent nearly all of his 83 years in Buffalo, save for a stint at Harvard University, where he earned a master’s degree in literature.

It is startling for me to think of him as 25 years gone. That number, doubled, defines much of his academic and professional life:

• He spent 50 years immersed in all things Canisius: four years as a student at the high school, four more as a student at the college, and 42 years teaching English at the college in an ever-changing array of courses. He coaxed the Griffin to campus as the mascot in his student days and earned a place in the college’s sports hall of fame for his tennis prowess. He even wrote the book on Canisius — its centennial history, half a century ago.

• He was, for 50 years, a book critic for The Buffalo Evening News, including its current iteration as The Buffalo News. Jeff Simon, his last editor there, wrote an extraordinary appreciation when he died that captures the man in full.

• And it is 50 years since The News named him an outstanding citizen of the year. Among others selected for 1970 were the owners of the newborn hockey team in town, Seymour and Northrup Knox.

Today the internet my father never knew offers multiple examples of his erudition. Look up the word “bravura” on dictionary.com and it gives, as a sample of the word’s usage, a sentence he wrote in a 1960 book review for The New York Times. 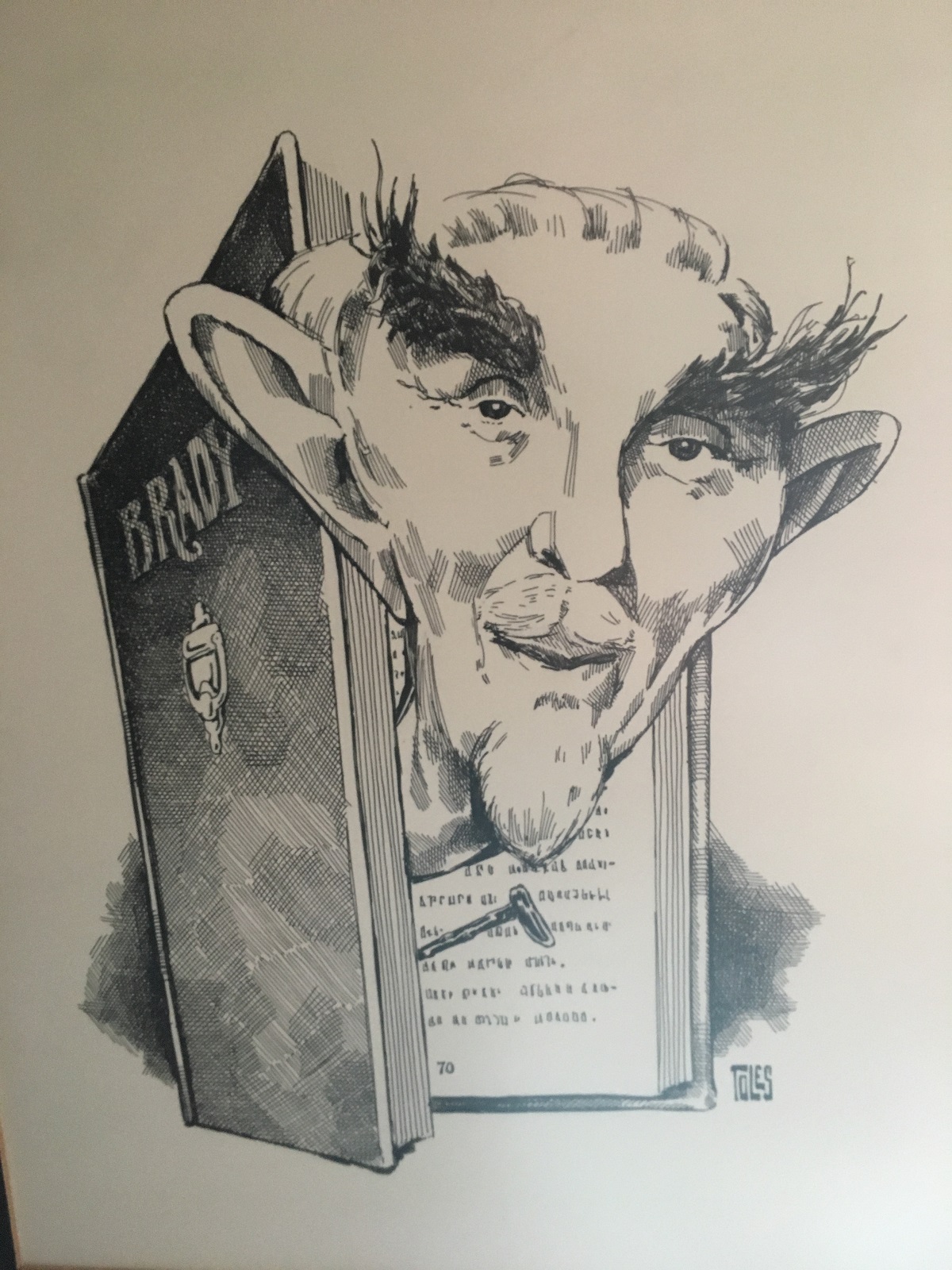 Charles Brady as drawn by Tom Toles in 1982 when Toles worked at the Courier-Express with Brady's son, Erik.

An appraisal of the novelist John P. Marquand in The Atlantic in 2004 is headlined: “Martini-Age Victorian” — a phrase, the essay notes, that comes courtesy of “the critic Charles Brady.”

He exchanged letters over the years with C.S. Lewis, the British literary lion. When I read his Narnia books to my children, they asked if this made their grandfather and Lewis pen pals. Why, yes, I told them; yes, it does.

The original letters now reside at the Bodleian Library at the University of Oxford, but you can read them in “The Collected Letters of C.S. Lewis,” which is perpetually in print.

Scholars especially prize the first of these letters, from 1944, because Lewis tells of his greatest literary influences. Our family prizes it for what Lewis says about our father:

“You are the first of my critics so far who has really read and understood all of my books and ‘made up’ the subject in a way that makes you an authority. The results interest me because they flatter my vanity as an author. But there’s also an interest of another kind. Here is a man trying to do what all in our profession do, and by the same methods, in the one case where I happen to know already the answers to most of the questions: surely an ideal opportunity for learning about the efficiency of the methods themselves!

“I have always been haunted by the fear that all of our studies of the dead authors (who can’t up and protest when we go wrong) may, in spite of careful documentation etc., be quite wide of the mark: on the whole you set that at rest.”

“The Hobbit is merely the adaptation to children of part of a huge private mythology of a most serious kind: the whole cosmic struggle as he sees it but mediated through an imaginary world. The Hobbit’s successor, which will soon be finished, will reveal this more clearly.”

The first book in “The Lord of the Rings” trilogy would not be published for 10 more years. Lewis’s letter suggests a reason, noting that Tolkien’s published work “ought to fill a shelf by now: but he’s one of those people who is never satisfied with a MS,” meaning manuscript. “The mere suggestion of publication provokes the reply” that he’ll look it over for finishing touches, which means that “he really begins the whole thing over again.”

The letter closes with an open invitation for my father to visit Lewis and the other Inklings at Oxford:

“I need not, perhaps, add that if you ever come here our little circle will make a red letter day of it. (By the way, port is usually drunk in common room, whereas oaks are sported in one’s own private rooms! But we’ll arrange port behind a sported oak for you if you like — though indeed beer and/or tea is our usual fare.)”

Alas, the visit never came to pass. Still, today I imagine my father sipping port with Lewis under the shade of a giant oak in Aslan’s Country, where all the days are red-letter days.