The Buffalo Museum of Science had high hopes for "The Golden Mummies of Egypt" exhibit in 2020.

Centuries-old mummies and other ancient artifacts from the Manchester Museum in Manchester, England, were going on tour for the first time, and Buffalo was hosting the U.S. premiere. It was a calculated risk for the nonprofit museum, since the exhibition came with a hefty price tag but also the promise of providing a rewarding educational experience and significant revenue for its many programs.

The sophisticated and artfully rendered exhibit opened Feb. 8 with tickets costing an extra $5 and requiring designated entry times due to anticipated demand. Attendance got off to an excellent start and sales exceeded the museum's projections through the first five weeks.

And then, because of the new coronavirus, it all came to a screeching halt.

The museum shut its doors March 14 to protect its staff and visitors, and help contain the disease's spread. That upended financial calculations and, for now, has left the state of the exhibit, which was only about a quarter of the way through its run, in a state of suspended animation.

It's also left the museum's coffers a projected $768,000 short in ticket and ancillary sales, such as concession and increased memberships. That is what had been anticipated from March 14 to June 21, when the exhibit was tentatively scheduled to close. An extension had also been possible before the exhibit was to be packed up and shipped by early July to the next exhibitor.

The museum insured the contents of the exhibition for damages, but was not covered for the kind of sudden cancellation that occurred. 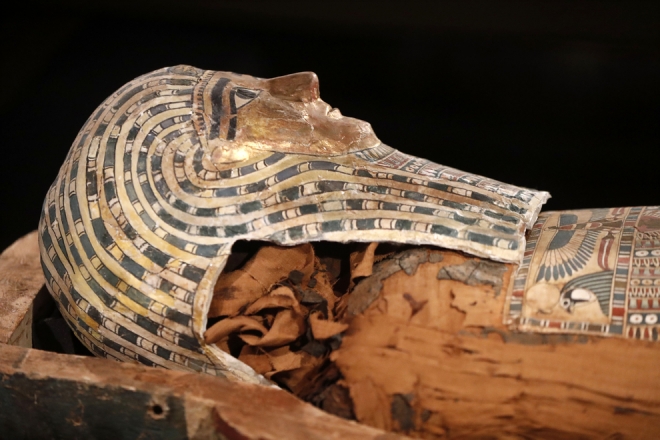 The Mummy and coffin of a woman named Tasheriankh is part of "The Golden Mummies of Egypt" exhibit at the Buffalo Museum of Science. (Mark Mulville/Buffalo News)

"It is certainly disappointing, and too bad that the community can't get to enjoy the exhibit as we had planned," said Marisa Wigglesworth, president and CEO of the Buffalo Society of Natural Sciences, which operates the museum.

"In those five weeks, and in fact even since we've been closed, I have had telephone or email discussions with people who just can't wait to see it, and now hope we will reopen and be able to extend the exhibit."

Wigglesworth said contractual arrangements prevented her from revealing the cost to bring the exhibit to Buffalo, though she put it "well into the six figures." The museum is "significantly" short of breaking even, she said.

There is a chance the exhibit can be extended into the early fall if – and it's a big if – the museum can reopen this summer. Wigglesworth is in negotiations with Nomad Exhibitions, the show's presenter, and expects a decision by mid-May. The discussion also involves the North Carolina Museum of Natural Sciences, where the exhibit is headed next. 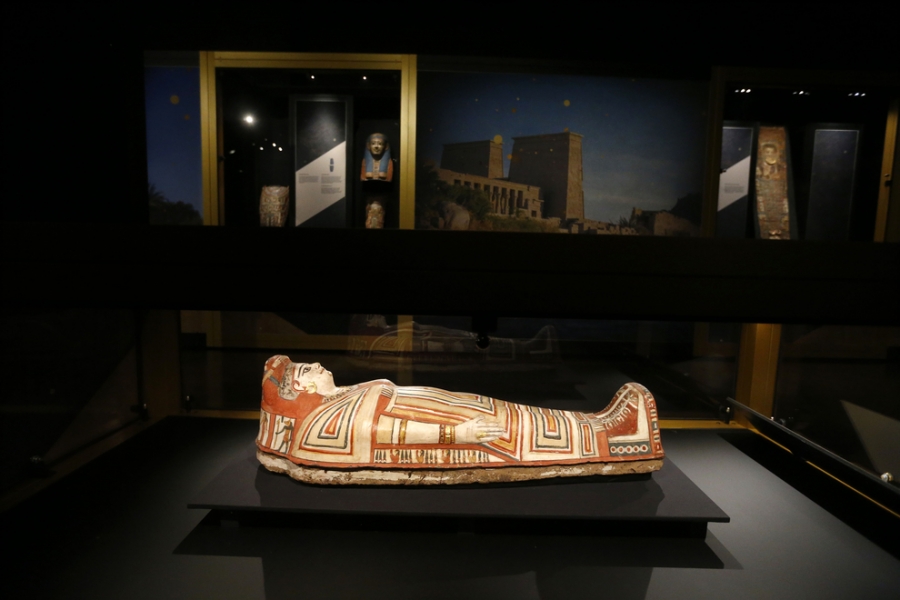 A decorative tomb for a young girl is part of "The Golden Mummies of Egypt" exhibit now in limbo at the Buffalo Museum of Science. (Mark Mulville/Buffalo News)

Museum staff haven't been spared the effects of Covid-19.

One-third of the full-time staff is working reduced hours, and one-third more, plus all of the part-time staff, are on temporary leave. Wigglesworth voluntarily took a salary reduction.

It wasn't supposed to be this way.

Mummies have long enjoyed a fascination and curiosity in popular culture, and exhibitions featuring them have proved to be powerful draws in museums around the United States. The artifacts for "The Golden Mummies of Egypt" are on tour only because the Manchester Museum, renowned for its collection of Egyptian artifacts, needed to close for renovations and a traveling show was a way to continue generating revenue.

The museum's plans to bring the mummy exhibit began in 2019, culminating in a late-October announcement of an early 2020 opening. The decision to host the opening exhibition added a prestige factor.

"It says a lot about the city and the Buffalo Museum of Science that we were able to attract the 'Golden Mummies' exhibit," said Dave Busch, chairman of the museum's Board of Managers. "It's the first time it's been out of England, it's the world premiere, and I don't think a lesser city or lesser museum could have attracted it."

The exhibit was a good fit for the museum, Wigglesworth said.

"This is an amazing exhibition and these are extraordinary artifacts, and we put a lot of resources and planning and effort and focus into making it possible," she said. "It was truly the item that would have the biggest impact and that came with the greatest financial investment."

The exhibit, contained within several dark rooms, creates a sensory experience through lighting, sound and film to view the tombs of eight mummies painted and gilded in gold leaf, and of the ancient ritual of mummification. Interactive scan technology allows viewers to learn about the people wrapped inside.

Strong attendance from a school break in Ontario was expected a week after the museum closed, along with the weeks around Easter. School groups were booked in May and June. There were 41 group cancellations in all, totaling 2,497 people, Wigglesworth said.

"Clearly, there are a lot more pressing matters in the community regarding people's health and well-being overall than this exhibit," Busch said. "At the same time, it's sad this opportunity for the entire region is potentially lost."

Because of so much uncertainty with the coronavirus, it's hard to make concrete financial predictions, Wigglesworth said. But it's clear the financial landscape is about to get more challenging.

"We are looking ahead to what is going to be a very significant operating deficit this fiscal year," she said of the period that begins Oct. 1 and goes to Sept. 30, 2021.

The current operating budget of $4.8 million is about $500,000 to $600,000 higher than normal due to added costs associated with the mummy exhibit, Wigglesworth said.

About 60% of the museum's typical budget comes from ticket sales and other museum-generated revenue. An additional 25% of the budget comes from county and state funding, and most of the rest from philanthropies.

"We are cognizant of the fact that our public sector funding may not be at the level going forward as it has been in the past, and certainly private philanthropy as well," Wigglesworth said.

It's all the more reason why the museum is hoping to reopen and resume "The Golden Mummies of Egypt."

But it's only part of the reason why.

" 'The Golden Mummies of Egypt' is one of the bigger and costlier exhibits we have brought in, but we do it not just from a financial perspective but as part of our service to the community," Busch said.

"We see bringing something like 'The Golden Mummies of Egypt' as part of our mission, and hopefully it pays off financially," he said.