The Buffalo Sabres aren't sure when the offseason will begin, so they must prepare for a number of scenarios, including the resumption of the National Hockey League season. A cancellation would lead to a significant drop in league revenue, impacting the salary cap and long-term planning for all 31 teams.

It's also likely there will be a virtual draft at some point in June and it's uncertain when free agency will begin because the entire league calendar could change once the NHL decides whether it is possible to resume.

Some players will be impacted more than others if the season is canceled. Prospects face an uncertain future because the American Hockey League could be inoperable without fans and it's possible fewer unrestricted free agents will receive long-term contracts.

Aside from a potential increase in escrow, most Sabres won't be directly impacted if they are unable to complete their final 13 regular-season games. However, the following six players could benefit greatly if the league finds a way to resume.

Simmonds knew what was at stake when he approved the trade in February that sent him from New Jersey to Buffalo in exchange for a conditional fifth-round draft pick. The final six weeks of the season were an opportunity for Simmonds to prove he still has the physical tools to be an effective power forward. Injuries impacted his production over the past two years and it's difficult to sustain the rugged style of play that resulted in six seasons of 24 or more goals with the Philadelphia Flyers.

Simmonds, a 31-year-old pending unrestricted free agent, had only one assist and a minus-4 rating in seven games with the Sabres. He provided a physical presence, but he didn't make much of an impact with the puck. A longer audition could be enough for Simmonds to secure a spot on the team next season. The Sabres need a player with his skill set, especially if they lose Zemgus Girgensons in free agency, and the price tag will be reasonable. The question is whether Simmonds fits with how the Sabres want to play under coach Ralph Krueger. 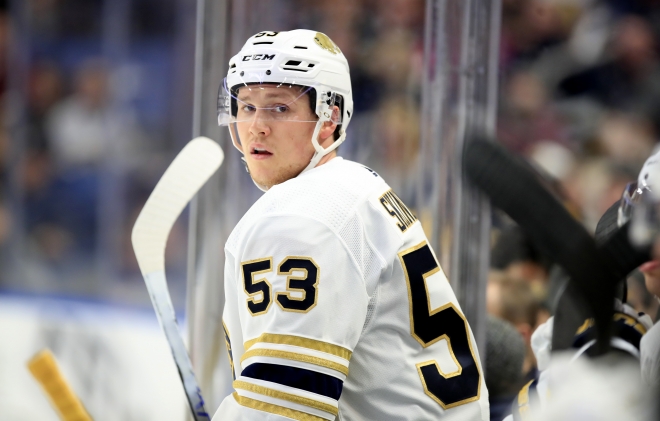 A resumption of the season would allow Skinner to salvage a disastrous start to the eight-year, $72 million contract he signed with the Sabres in June. He has only 14 goals with nine assists and a team-worst minus-22 rating in 59 games, including a career-high 22-game scoring drought.

According to NaturalStatTrick.com, Skinner leads the Sabres with 65 individual high-danger scoring chances – 10 more than Jack Eichel and Sam Reinhart. Yet, Krueger chose to sit Skinner when the Sabres were tied or trailing late in games.

Skinner was gaining traction in the weeks leading up to play being suspended and was reunited on the top line with Eichel and Reinhart for the final two games. The lack of production can be partially tied to usage, as Skinner spent most of his ice time with Marcus Johansson, who had not been a full-time center in several years.

More games would allow Krueger time to use Skinner with Eichel or potentially on a line with Dominik Kahun. The Sabres need someone other than Eichel and Reinhart to produce at 5 on 5. In 10 games after Victor Olofsson returned from a lower-body injury Feb. 13, the top line of Eichel, Olofsson and Reinhart combined for only three goals at 5 on 5. 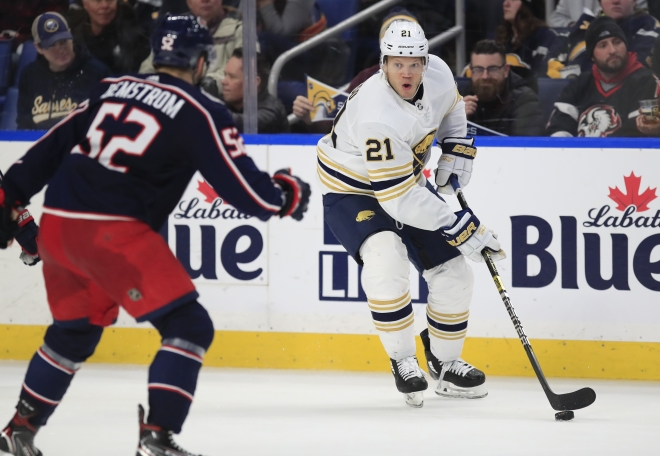 Okposo is the Sabre who might lose the most if the NHL can't resume. A cancellation of the season would have a significant impact on revenue and, in turn, a team's ability to sign players this offseason. One possible financial solution is compliance buyouts, which were last used in the two offseasons following the lockout in 2012-13. The Sabres bought out Ville Leino and Christian Ehrhoff over a nine-day span in June 2014.

Despite his improved performance, Okposo would be the top buyout candidate because of his $6 million annual cap hit. The Sabres would have to pay two-thirds of the $14 million owed to Okposo through the 2022-23 season – his $42 million contract was front-loaded – but the amount would not count against the salary cap. This would provide the Sabres with financial flexibility in what will be a challenging offseason. There's one caveat with these buyouts: The Sabres would not be able to re-sign Okposo for 12 months.

Okposo would not have trouble finding a job. The 32-year-old winger proved this season he can be productive in a checking-line role. However, he would immediately lose $6 million and, although Okposo could sign a contract elsewhere for a much smaller average annual value, he would be forced to relocate after his family made Buffalo its permanent home. A resumption of the season could give the league enough revenue to avoid compliance buyouts. 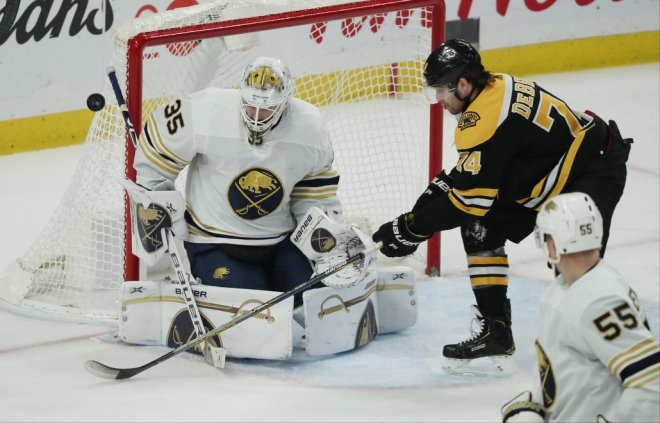 Fans are calling for a change in goal, and can you blame them? They spent decades watching a master class in goaltending, from Roger Crozier to Dominik Hasek to Ryan Miller. The position has played a significant role in the franchise's playoff drought.

But it's important to remember the Sabres have Linus Ullmark, a potential No. 1 goalie on the roster.

Ullmark, who turns 27 in July, had a .915 save percentage in 23 games from Nov. 24 through Jan. 28, which ranked third in the National Hockey League during that span. The suspension of play limited Ullmark to only one start following his return from a lower-body injury, a 33-save performance in a 3-2 shootout win over the Washington Capitals on March 9.

Ullmark's .930 save percentage at 5 on 5 ranks fifth among goalies with at least 30 games played this season. His status as the starting goalie is unlikely to be impacted if the NHL cancels the remainder of the season. However, such a scenario would limit Ullmark to only one game in a span of eight months, which could hurt his on-ice development. A long break could potentially force the Sabres to invest in the position this offseason, though Carter Hutton is under contract for next season. 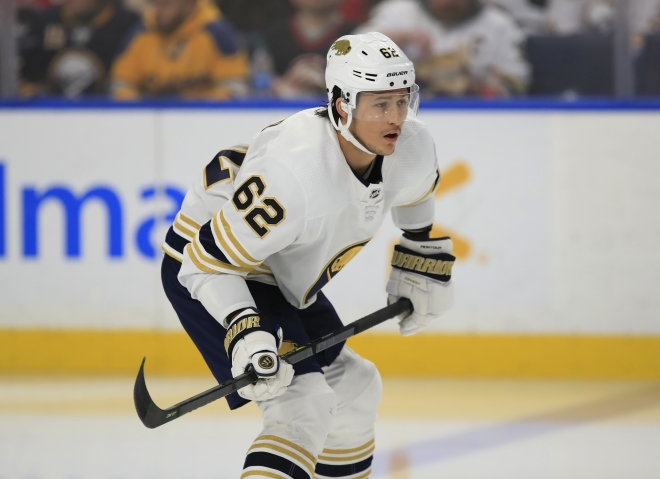 Brandon Montour is another example of the bizarre player usage under Krueger. The coach didn't have much of a choice in this case. The Sabres' surplus of right-shot defensemen caused Montour to spend most of the season on the left side, which exacerbated the 25-year-old's struggles without the puck and resulted in lackluster offensive production.

To his credit, Montour started to adjust to the left side, particularly offensively, and a resumption of the season would give him the opportunity to earn more money in restricted free agency this summer. The price tag likely dropped because he has only 18 points in 54 games this season.

The Sabres also could use more time to evaluate Montour because General Manager Jason Botterill must make a decision about which defensemen to keep for 2020-21. The team can't pay everyone – Reinhart also is a pending restricted free agent and the Sabres will likely try to sign Rasmus Dahlin before he reaches restricted free agency next summer. Trading a talented defenseman could help the Sabres acquire a top-six forward. 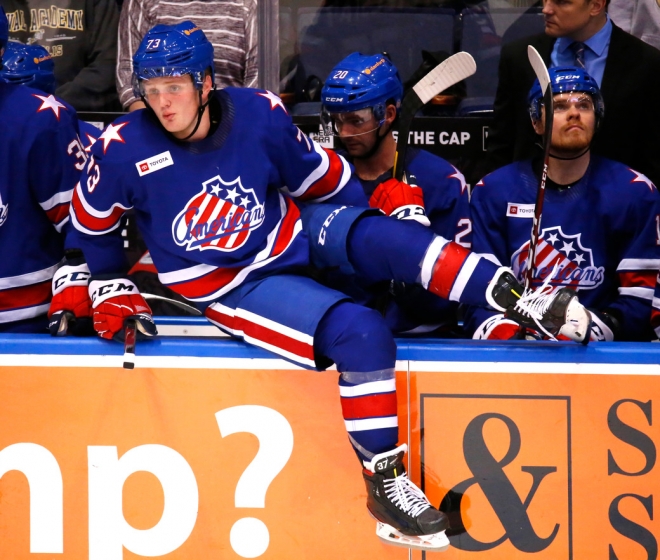 Casey Mittelstadt saw an increase in confidence with his time with the Rochester Americans. (Harry Scull Jr./Buffalo News)

The American Hockey League's reliance on ticket revenue likely will prevent it from completing its season, spoiling the Rochester Americans' goal of a long playoff run. The Sabres won't want all of those prospects to sit idle, though. Mittelstadt could be a candidate to join Buffalo if the NHL resumes its season.

The 21-year-old center was making progress in a number of areas with the Amerks, most notably on defense. He became a leader in his 36 games with the Amerks and more comfort without the puck allowed him to use his skill to create offensively. A recall to Buffalo would give Mittelstadt a chance to show he is ready for a full-time NHL role next season.

Vote which Sabres team is the best in franchise history