EagleHawk is thinking ahead to when sporting events return to stadiums and arenas.

No one knows when that day will come. But the homegrown tech startup has developed a method that uses its drones to disinfect those vast places, anticipating ongoing concerns about Covid-19 and public gatherings.

"We're going to perfect it with the goal that once we get back to sports, hopefully this fall, we'll have a solution to help these arenas disinfect on a regular basis," said Patrick Walsh, the CEO.

EagleHawk has built its business flying drones equipped with thermal cameras to inspect commercial roofs, heating systems and building facades, among other uses. Through the data the startup collects and analyzes, customers see trouble spots that need addressing.

EagleHawk continues to perform that work, but also has responded to the pandemic by innovating. The company has tested using drones to spray liquid in arenas and stadiums. Its drone was outfitted with sprayers, supplied by liquid pumped through a hose connected to a tank on the ground. 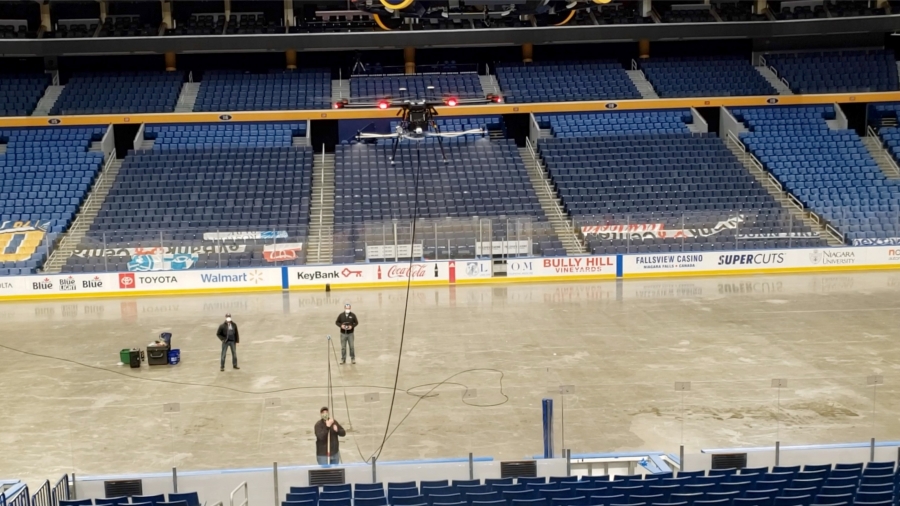 EagleHawk first experimented with off-the-shelf drones produced for the agricultural industry, but discovered those units had limitations. Their on-board tanks could carry only so much liquid, due to federal weight restrictions. And the units couldn't spray liquid at a high enough volume to meet requirements for how long arena seats would have to remain wet in order for disinfectant to work properly.

So EagleHawk developed its own solution and has tried it out – spraying water instead of chemicals – at places like KeyBank Center. Walsh liked the results.

"We think we can disinfect all the seating within the arena in a matter of hours, versus what might take a crew of people in backpack sprayers to do over three, four, six, seven, eight hours and much more expensive and then dangerous for the people [spraying the chemicals]," he said.

An arena like KeyBank Center might host multiple events in the same week, requiring an efficient way to clean between events, he said.

EagleHawk has also tested its technology at the University at Buffalo's football stadium. Walsh said an outdoor venue presents its own set of challenges, with wind, sun and relative humidity affecting the liquid that is sprayed.

For now, the drones' only limitation for spraying is battery life. EagleHawk is working on supplying power to the drone through a cable attached from the ground.

EagleHawk is coordinating with government regulators to ensure its spraying plans pass muster, Walsh said. And the company already has relationships with about two dozen colleges and universities, who are potential customers for stadiums and arenas in need of disinfecting.

"I think it's an opportunity to leverage what we do best to help out," said Will Schulmeister, EagleHawk's chief operating officer.

EagleHawk was coming off a big year. It nearly doubled its revenues in 2019 and won $500,000 as a finalist in the Genius New York competition held in Syracuse. The company has grown to 10 employees and hasn't laid off anyone, Walsh said.

Joel Giambra, an adviser to EagleHawk, said the company's spraying solution could help shape how sporting events can come back.

"This application could be very helpful in establishing the protocol that's going to be required to allow for sporting events to take place," he said.