While his wife and three daughters slept in their bedrooms just steps away, Kenneth A. Poloncarz was murdered outside his West Seneca home during a booming thunderstorm early on the morning of April 23, 1977.

His killer fired two shotgun blasts that struck Poloncarz, 33, in the upper body in his driveway on Garry Drive.

The crime occurred around 4:45 a.m., after Poloncarz had spent time bowling and socializing at the old Lucky Strike Lanes in Lackawanna and a nearby tavern.

They also think about the man who was charged with murdering their father, and why the case against him was never pursued.

“I heard the shots. At first, I thought it was thunder,” recalled Paulette C. Poloncarz, now 74. “But it was so loud that I went and looked out the front window. I saw a brown car pulling out of our driveway, and then heading down the street.”

Members of the Poloncarz family believed then – and still believe today – that the shooter was a Buffalo man who was angry over Poloncarz’s affair with the man’s estranged wife.

The day of the slaying, West Seneca police arrested the man – whom they publicly identified as Ronald Pietruszewski, 34 – on a murder charge. But prosecutors from the Erie County District Attorney’s Office dropped the charges two days after the slaying, saying they would present evidence on the crime to a grand jury.

After that, the case against Pietruszewski just disappeared.

The grand jury never indicted him, he walked away a free man, changed his name, and now at age 78, he lives in Florida.

Pietruszewski did not respond to telephone and email messages left for him by a Buffalo News reporter. The Hamburg attorney who represented him after his arrest said Pietruszewski “adamantly” denied having anything to do with the crime.

Pittner was seven when her father was killed, right outside her bedroom window.

“At this point in my life, I’m not looking to see a man who is almost 80 years old thrown in jail,” she said. “What I’d really like is for him to just admit to what he did and apologize to my family. That would be much more important than seeing him in prison.” 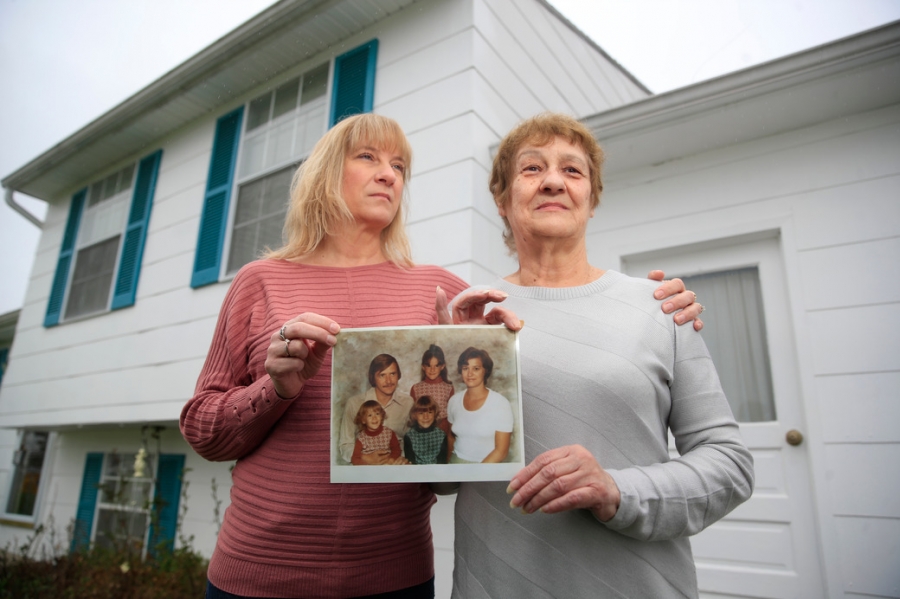 Krissy Pittner, left, and her mother Paulette Poloncarz were home sleeping at this Garry Road home in West Seneca when Paulette's husband, Kenneth Poloncarz, was shot dead in the driveway in 1977. (Harry Scull Jr./Buffalo News)

District Attorney John J. Flynn has been reviewing the case since The News contacted him about the family’s concerns last month.

“Brian will be working with the West Seneca police and we will be actively reinvestigating this case,” Flynn said.

He called Pietruszewski “a person of interest” in the new investigation but said “all possibilities” will be examined.

“I do feel very strongly that the families of homicide victims should be never be forgotten, so we will be taking a very thorough look at the entire situation,” Flynn said. He noted that there is no statute of limitations on a homicide case.

What happened to the case against Pietruszewski?

“I don’t know exactly why, but the case was never presented to a grand jury,” Flynn said. “There is an indication in the file that the prosecutors who were working on it at that time felt there was insufficient evidence.”

As it happens, the DA at the time of the Poloncarz murder was Flynn’s uncle, Edward C. Cosgrove.

Cosgrove, 85, who now heads a Buffalo law firm, became upset Friday when a News reporter questioned him about the case. Asked why the murder charge was dropped, Cosgrove declined to comment on the record.

Poloncarz was a first cousin of Charles Poloncarz, the father of Erie County Executive Mark Poloncarz, who was 9 years old at the time of the murder.

Kenneth Poloncarz was a loving father and in most ways a good man, his widow told The News. But she said he did have an affair with Pietruszewski’s estranged wife, a woman Poloncarz had met at Lucky Strike Lanes.

“Their affair lasted about two years, and a lot of people knew about it. I knew about it,” Paulette Poloncarz recalled. “About two weeks before he was killed, Ken told me the affair was over because he wanted to save his relationship with me and our girls.”

But according to police reports, Poloncarz – after bowling and drinking with friends – met up with Pietruszewski’s estranged wife about three hours before the murder.

Poloncarz and the woman had a couple of drinks at a bar called Sherlock’s, and then sat in Poloncarz’s parked car until 4:30 a.m. Then they drove in separate cars to their homes, police said.

The killer shot Poloncarz shortly after he pulled into his driveway and stepped out of his vehicle, police said.

After detectives charged Pietruszewski with murder, a West Seneca police captain told The News and other media that Poloncarz had been murdered because of his involvement with Pietruszewski’s estranged wife in a “love triangle.” But one day after the arrest, the DA’s Office asked a judge to drop the charge so the case could be presented to a grand jury for possible indictment.

Pietruszewski’s attorney, Elbert “Bert” Hargesheimer III, and West Seneca Detective Edward Tyczka said they expected that the DA’s Office would quickly get an indictment and that Pietruszewski would go on trial.

So did Scott D. Peterson, the rookie assistant DA who handled the case in its earliest stages.

“I was getting ready for trial … but eventually, the case just went away,” Hargesheimer told The News last week. “Nobody ever explained to me what happened. I was surprised. That was not the way things went in those days.”

Hargesheimer added that Pietruszewski insisted that police wrongly accused him.

“To this day, it’s a mystery to me why the case was never prosecuted,” said Tyczka, who retired from police work in 2001. “It baffles me. I thought we had some very strong circumstantial evidence, including an identification that was made of the suspect’s car leaving the crime scene.”

Peterson, now a partner in a Rochester law firm, said he was told by his bosses in the DA’s Office to get the murder charge dropped, and that higher-ranked prosecutors would take over the case and present evidence to the grand jury.

“I don’t know what happened after that,” Peterson said.

“It was fairly routine in a case like that to drop the charge and present evidence directly to the grand jury,” he said. “But that is not a decision I would have made myself as a rookie in the office.”

Pittner, a hospital nurse, said her family has always wondered why the murder charge was dropped and never pursued.

“Whenever I hear that old saying about someone getting away with murder, I always shake my head and say to myself, ‘You have no idea,’ ” Pittner said. "Nobody has ever explained to us why the murder charge was dropped."

West Seneca police asked that anyone with information about the cold case contact their offices at 674-3154 or 674-2280.

Poloncarz was an Army veteran who repaired and maintained X-ray machines at local medical facilities. His widow remembers him as a funny, easygoing man who deeply loved his three daughters.

Paulette Poloncarz said it was difficult to raise three daughters without their father.

After the murder, she stayed in the Garry Drive home, and still lives there, even though it pains her to walk past the spot where she found her husband’s body.

It bothers her to think that he would now have seven grandchildren if he had not been murdered.

“Ken loved sports, and he would have loved playing hockey and baseball with those kids,” she said. “He would have made a wonderful grandfather.”