Joe Pitts started getting sick the first weekend in April.

He was admitted to Buffalo General Medical Center a few days later and spent 17 days on a ventilator in intensive care as he battled Covid-19. The last call to his family came April 24. Nurses put the phone up to Joe's ear. Family members prayed.

"We were able to ... give him our love and goodbyes," said his mother, Danetta McKinnon.

About 10 minutes after the phone call ended, Pitts died. He was 34.

Friends and family who gathered at True Bethel Baptist Church for his wake and funeral on Saturday saw lines marked on the floor of the sanctuary every 6 feet. Seating was blocked off during the wake, to discourage people from staying.

Death amid a pandemic means restrictions on how families mourn. Fewer people can attend funerals – only immediate family were allowed to attend the service for Pitts.

Not even a hug can be shared.

"It's just not the norm," McKinnon said.

The church's rules amid the pandemic incorporate social distancing guidelines. 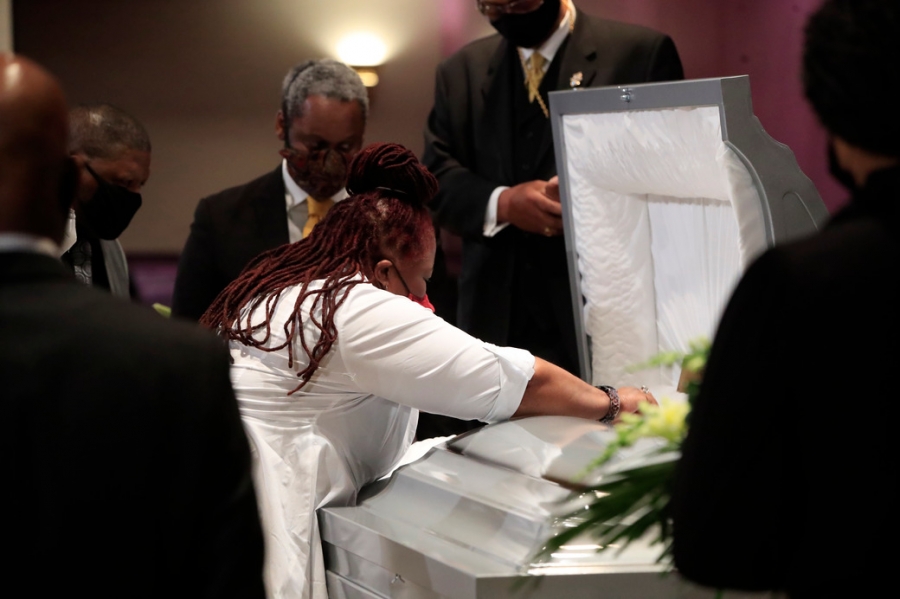 At True Bethel, the time allowed for the wake was lengthened in order to give mourners an extended time to gather with the hopes of avoiding masses of people at once, said Bishop Darius G. Pridgen. While the church has offered families the ability to stream funeral services online for about 10 years, during the pandemic True Bethel has been allowing families to also stream the wake, if they choose.

Pridgen knows Covid-19 well.  He is the church's senior pastor and presided over Pitts' funeral. Pridgen was diagnosed with Covid-19 in March, and three of his adult children had it, including a daughter who had been on life support but recovered. 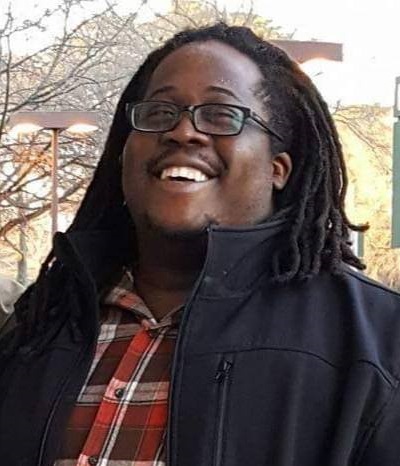 True Bethel encourages close family members not to arrive at the wake until close to the end so there is less of a possibility mourners may congregate with the family, Pridgen said. About a half-hour before the funeral, the church empties so it can be sanitized.

The length of services, which in the past could be as long as 90 minutes, are now typically less than 45, Pridgen said. For funerals in which the service continues at the gravesite, the church is limiting the size of the gathering there to 10 to 15 people.

True Bethel has a sign in the front of the lobby about Covid-19 and safe practices.

"Something we'd never thought we'd have to do is warn people about health before coming into church," Pridgen said.

Pridgen knew Pitts since he was an infant. As children, Pridgen grew up in the same church as Pitts' mother, who works for True Bethel as pastor of administration and worship.

"Joe was like a big teddy bear," Pridgen said. "He would lift up my little frame, grab me from behind, surprise me and lift me up. It was like a guy who you would be surprised if he ever hurt an ant.”

Joseph Earl Pitts graduated from Lafayette High School and worked at Cracker Barrel and FedEx before getting his commercial driver's license, his mother said.

Pitts is among the youngest Erie County residents to have died from Covid-19. Through Friday morning, five of the 270 people who died of Covid-19 were in their 30s, according to data released by the Erie County Department of Health. 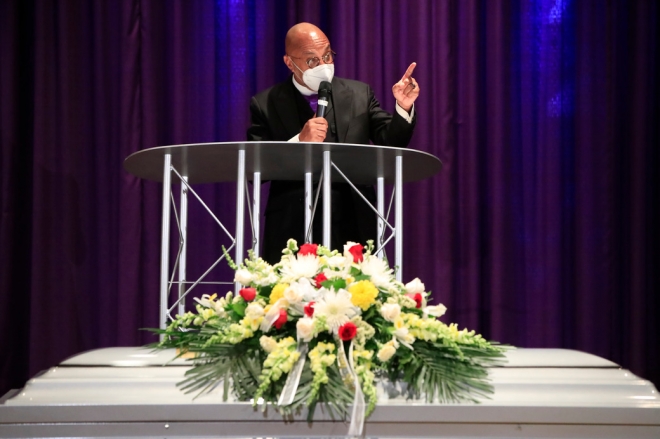 Except for a roughly two-year period a few years ago when he lived in Maryland, he spent his life in Buffalo. He had been a truck driver between eight and 10 years, his mother said.

"He loved to drive," she said.

She described her son could be seen as "the rock of our family." As a child, he had a learning disability and dyslexia, overcoming both, she said.

Whenever the mother and son drove together, either on the way to their destination or on their way back, they had to drive through downtown Buffalo. Her son was fascinated by the city's architecture, she said.

"He loved family and he loved the City of Buffalo," she said.

McKinnon, herself, recovered from Covid-19, having spent four days in the hospital. The day she was discharged was the day her son started feeling ill, she said.

Her son loved all kinds of music, according to his younger brother, Timothy. He was a big Seattle Seahawks fan. So much so, he was laid to rest in his casket wearing Marshawn Lynch's No. 24 Seahawks jersey. 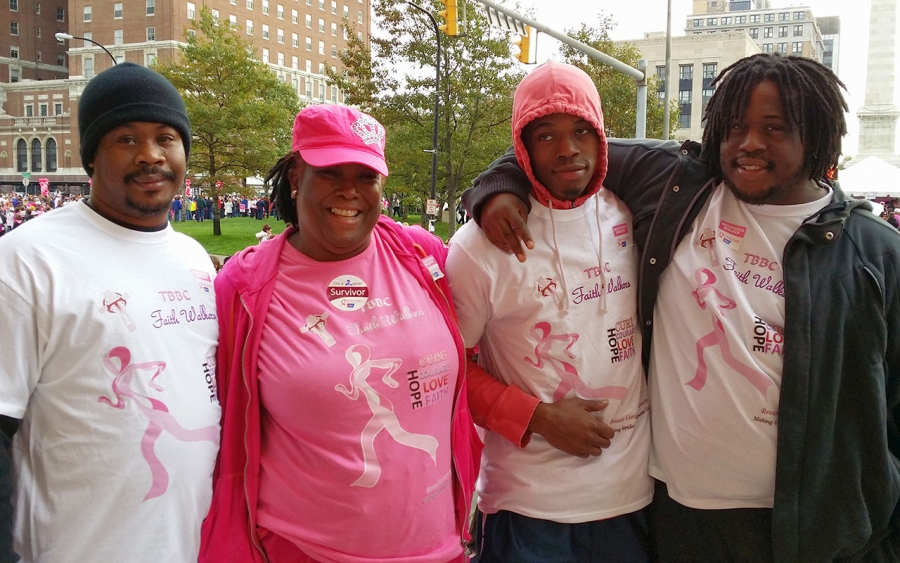 In addition to his mother and brother, Pitts was survived by his father, Kevin Pitts Sr.; a sister, Evan Pitts; another brother, Kevin Jr.; and three stepsiblings.

Joe and his mom were close – Joe's mother "was probably his best friend," Pridgen said.

"His biggest thing was about pleasing and taking care of family, his brothers, his sisters, his mom, especially his mom," the pastor said. 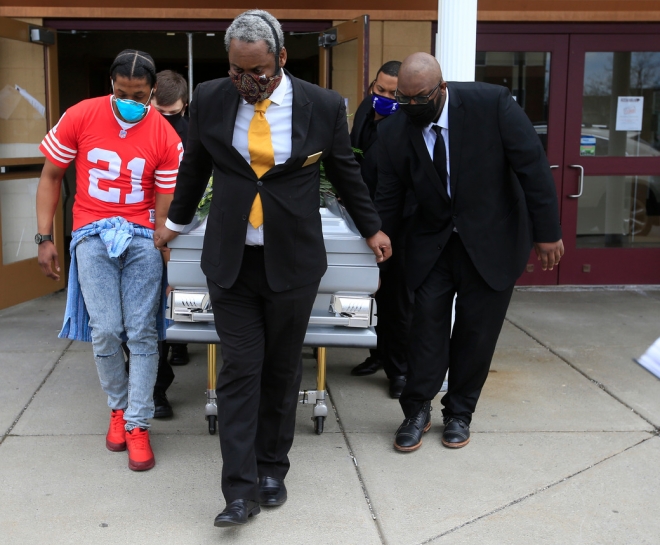 On Thursday night, about 70 people joined in a virtual memorial service using a video conferencing application. In addition to a slide show with pictures of Joe, there was an entire program, including prayer and expressions of love from the people closest to him.

McKinnon said she recorded the call, so the family can watch it in the future.

She said she doesn't have any indication about why the novel coronavirus hit her son so hard and ended up taking his life.