Harrison Phillips calls it "The Lab."

It's an area he estimates is about 15 yards long and 15 yards wide in the basement of the Omaha, Neb., home of a former high school teammate, Cole Johnston, who works in physical therapy.

"I like to think of it as maybe like an evil laboratory," Phillips said in a Zoom interview earlier this week from Omaha, where he was born and raised. "You're coming to the lab, you're coming to bang heavy weights."

Since mid-March, when the coronavirus pandemic forced NFL team facilities to close, the Buffalo Bills defensive tackle has spent six days a week in "The Lab." It is where he is putting in a large amount of the time and energy to work his way back from the season-ending torn anterior cruciate ligament he suffered in his left knee during the Bills' Sept. 22 victory against Cincinnati at New Era Field.

“You know, it's hard to put a percentage of where I think I would be," Phillips said. "But I'm starting to feel like a football player."

Phillips follows a program that calls for four days of a single workout and two days when he doubles up. "The Lab" has a dozen pieces of exercise equipment and enough weights to accommodate a 700-pound lift. "I think 535 is the most I've been doing right now," Phillips said.

Three other former high school teammates train with him in "The Lab." Phillips said they make an effort to adhere to social distancing, although he acknowledges it isn't as easy when someone is spotting for a bench press. Two containers of Lysol spray and three with disinfectant wipes are always within reach. 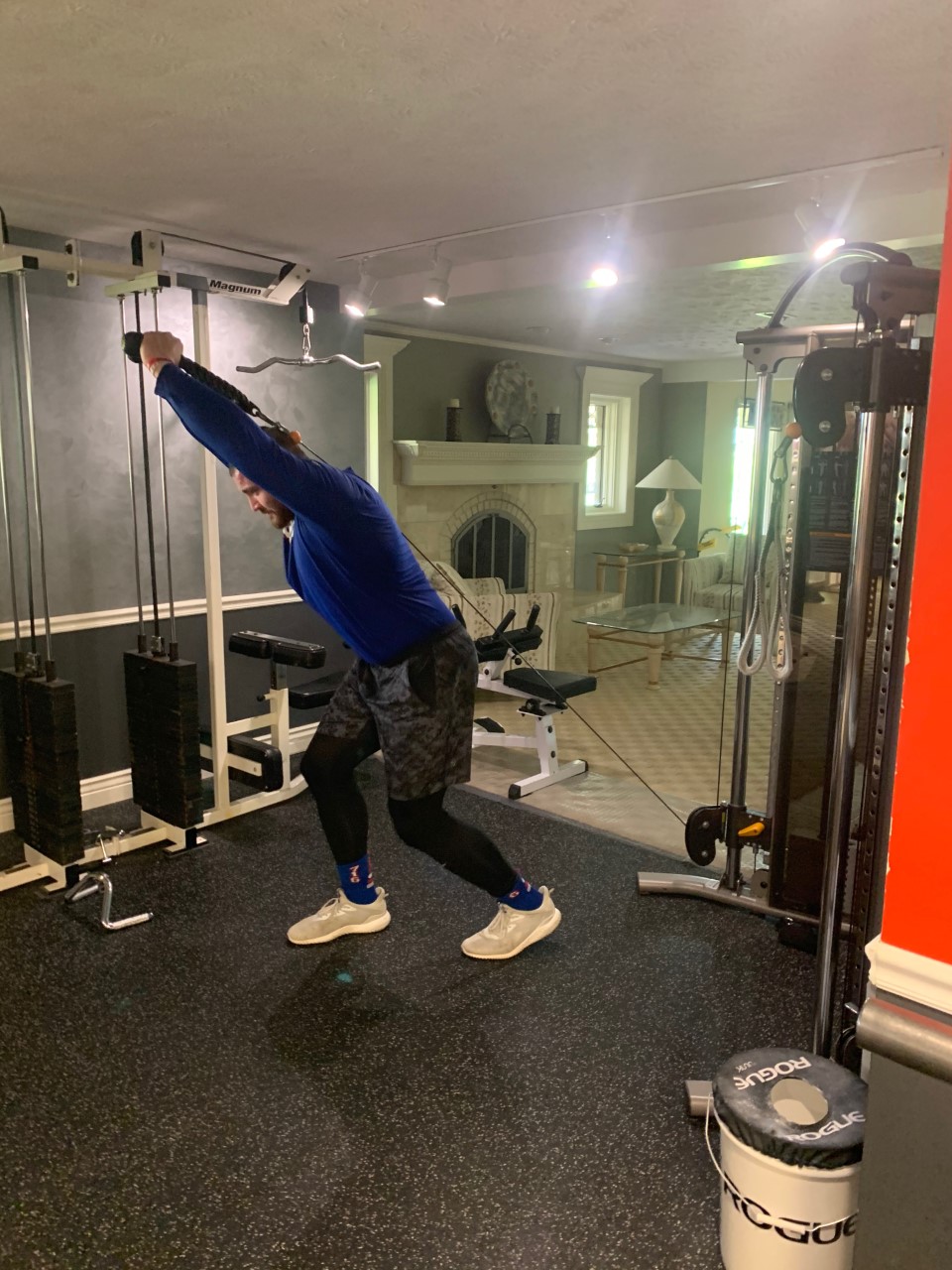 Even if there wasn't a health crisis, Phillips would be going through a long, grueling rehabilitation from surgery in which the patellar tendon from his right knee was grafted to replace the ACL in his left knee. He just would have been doing it at One Bills Drive. The day the facility closed, he packed up and headed for Omaha, moving into his parents' two-bedroom home.

"The second bedroom is my dad's office, so I actually live in a storage room in the basement," Phillips said. "My bed is against concrete walls, with storage boxes, and I got spiders. It's really like a dungeon in there. It's so cold and dark, I can sleep until like 3 in the afternoon and not know what time it is. But it's not the lavish NFL lifestyle that my friends think I might live."

There is nothing glamorous about pushing his body as far as he can, day after day. He is in constant touch with the Bills' strength and conditioning and athletic training staffs.

Phillips has a series of drills that he does in "The Lab," and outside, that allow him to replicate what he would be doing at the team facility. Video conferencing is used to provide guidance. His girlfriend records the workouts on her cellphone and sends each video to Bills staffers.

"My run workouts include football drills, so I'll go out there and do some pass rush on air or run the hoop that you see us run in practice all the time," Phillips said. "Doing conditioning, doing sprints and things like that. Running up hills, doing get-offs, all the stuff that would be kind of considered individual (work) at training camp. So, I think I could probably do almost all that stuff, maybe at a 90% speed so you're not doing anything too crazy.

"But it's just fun to be out there doing that again and cutting and changing direction and running through bags. Football stuff rather than just straight line. Obviously, I’m not ready for contact today. But I'm very optimistic thinking that, if we aren't playing a game for four months or whatever it is, three months for training camp. So, I think in that time, I keep progressing at the rate that I'm progressing, everything will be good." 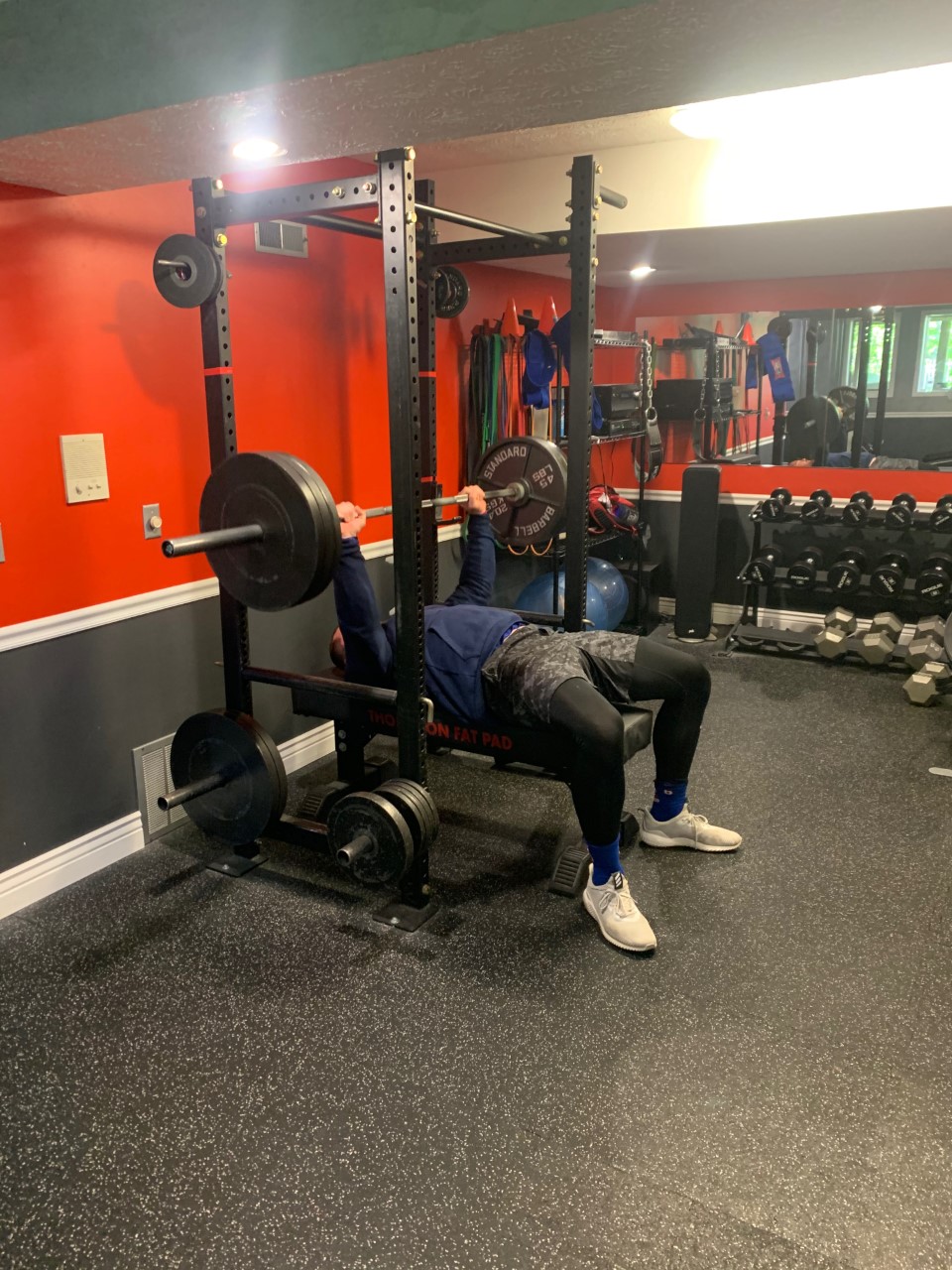 At the time of his injury, Phillips was playing his best football since joining the Bills in 2018 as a third-round draft pick from Stanford. He had performed well enough the previous week, in a win against the New York Giants, to receive a game ball and be moved up the depth chart on the third-down defensive package because of his pass-rush prowess.

Another unknown is what the Bills' defensive line position will look like whenever games are played. The club's second-most prominent addition, after acquiring wide receiver Stefon Diggs in a trade with the Minnesota Vikings, is Iowa defensive end A.J. Epenesa with a second-round pick. In free agency, the Bills added tackles Vernon Butler and Quinton Jefferson, and end Mario Addison and lost tackle Jordan Phillips and end Shaq Lawson.

Asked how he saw his fit, Phillips said "competition" was the first word that came to mind.

"I think that, when you look at the roster, you look at a lot of guys who have a lot of versatility. So it's not, ‘Hey, this is our guy that plays rush defensive end.’ It's, ‘OK, this guy can be a defensive end. He can come down in here. He can also play the other side on a tight end.’ Same thing with D-tackles. ‘You're playing a one-technique, you're playing a three-technique.’

"You go back and watch some of Carolina's film, Vernon Butler was playing defensive end in some of the games. We’ve got Quinton, and he plays defensive end, defensive tackle, kind of all along the board. So we want to be interchangeable, that we can learn every single (aspect) of the defense. Obviously, I feel comfortable lining up on guards and centers, but we have so much competition in the room that you need to find ways to be above and beyond.”