Outstanding and satisfactory are in.

Final exams are out.

The announcement by Gov. Andrew Cuomo that schools across the state will remain closed for the rest of the school year amid the Covid-19 pandemic ensures home instruction carries on for at least another couple months.

It also continues to redefine the traditional notion of grading, report cards and learning – a fundamental issue school districts have been grappling with heading into the final quarter of a school year like no other.

How do you grade students who haven’t set foot in a classroom for weeks and are learning from home?

In Buffalo Public Schools, for example, the school system decided to extend the third quarter through June 19 and count that as 50% of a student’s final grade.

Grades were frozen from when schools first closed in mid-March. Anything after that will be treated as “exempt.”

That means graded assignments from home won’t lower a student’s grades – but it can improve them.

“Anything they’re doing to try to submit work, even if it’s not perfect, will help a student,” said Anne Botticelli, the district’s chief academic officer. “We want to keep going back and giving them opportunities to learn – learning matters more than the grade.”

Educators around the region aren’t ready to give every kid get an “A” during the pandemic, but there’s certainly some latitude and an acknowledgement that students may have an easier time advancing to the next grade under these new conditions.

That became clear in early April when the state Education Department canceled the June Regents exams.

In order to earn a Regents diploma, students are required to pass five Regents exams, which can be a struggle. This year, though, students are exempt from the exams and, as long as they pass their Regents courses, get the credit.

“We’re certainly going to have more kids pass than normal. We know that,” said Sean Croft, superintendent of the Starpoint Central School District.

“But we plan on getting teachers in over the summer and making adjustments to the curriculum so we account for that lag in learning when they come back – hopefully in September,” Croft said. “September might sort of be a bridge month when we take the time to clean up and review concepts that would normally be reviewed in the fourth quarter.” 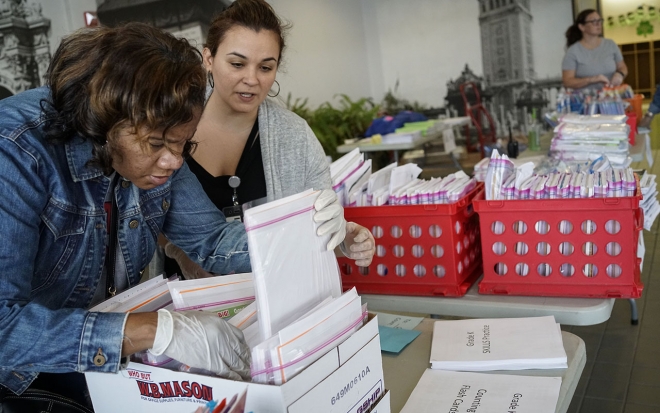 While grades may be calculated differently in the age of Covid-19, districts said they are trying to walk a fine line between equity and engagement.

School districts don’t want to penalize students unable to do the work during this period of home instruction given their wide array of circumstances – access to the internet, special needs and families struggling to stay afloat financially, to name a few.

Are kids turning in assignments?

Are they showing up on Google Meet?

Teachers are keeping tabs and factoring in the effort being put forth.

“Equity is a big issue so that no student is penalized for not being able to do work,” Godshall said. “However, students must be responsive to lessons and being engaged is still important for students to obtain credit for work and efforts.”

Some school districts will rely more heavily on grades from the first half of the year.

Others will continue to provide numerical grades, but with a more "holistic" approach to student performance.

Some switched to a pass-fail model of grading.

“Everything that is happening, from third quarter on, is considered pass-fail,” said Kimberly Moritz, superintendent of Springville-Griffith Institute Central Schools.

“We said, ‘Let’s just get kids the course credit, let’s make sure we’re continuing their learning and, for our youngest students, really thinking about how do we make sure there’s as little regression as possible,’ ” Moritz said.

Starpoint also decided to switch to pass-fail during this home stretch. The district is considering using the first two quarters to calculate a final average for the year.

“We’re sensitive to the stressors in each household, so we’re not going to be sitting there giving 95s or 64s,” Croft said.

“There is a balance there,” Croft said. “We want kids to complete the work, we’re giving them feedback, we’re correcting it, but we’re not assigning grades in terms of a numerical grade. We think it’s inappropriate in the climate that we’re in.”

In Buffalo, elementary school students will receive a final rating of “Outstanding,” “Satisfactory” or “Incomplete.” Those who receive an incomplete in reading or math would be recommended for summer school.

Students in grades seven through 12 will still get numerical grades, Botticelli said. But anything below a 65% will be converted to an “incomplete.” Those students also will be recommended for summer school.

“An incomplete sends a message to a student that, No. 1, we know that some of this is because of the situation that everyone is dealing with,” Botticelli said. “And it sends a message to us that we need to provide additional supports to that student.” 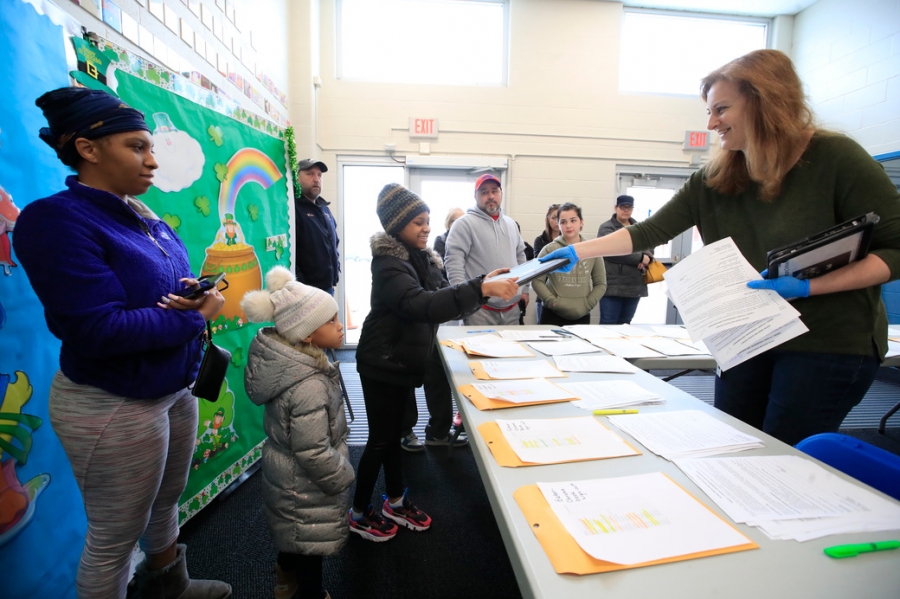 Jazar Parrett, a fourth-grade student at Cayuga Heights Elementary School, picks up a Chromebook after school closed as a result of the Covid-19 outbreak in March. (Harry Scull Jr./Buffalo News)

In the Lewiston-Porter Central School District, the third quarter closed this past Thursday.

Like Buffalo, Lew-Port relied on grades recorded before schools closed, while the work assigned to students at home counted as additional support or extra credit for third-quarter marks.

“As we go into the fourth marking period, it looks a little different at all the grade levels,” said Paul Casseri, the superintendent. “In the middle school, we’re looking at a pass-fail kind of approach and similarly in our elementary program.”

High school students, for the most part, will receive traditional grades based more on assignments and projects, rather than tests, Casseri said.

And in the Kenmore-Town of Tonawanda Union Free School District, report cards already went out in March and early April with a bulk of the grades, if not all of them, recorded before the shutdown.

“Fourth quarter we’re still working on,” said Stephen Bovino, the superintendent. “But I can tell you at the secondary level, although it may not be finalized, students will be receiving a grade-point average. How that’s going to be calculated we’re still working through some details.”

The pandemic is challenging traditional norms of grading and testing used to prove knowledge of the material, Mortiz said.

But she sees a silver lining in that.

“I actually hope that after all of this is over maybe we can have some lessons that we learned from this time,” Moritz said. “Perhaps some of these things we’ve clung to don’t seem so important anymore and we can focus on how we really define learning.”