Taking a page from the George Harrison playbook, and in particular the lessons the "Quiet Beatle" learned when navigating the complexities of his groundbreaking 1971 "Concert for Bangladesh" –  a massive undertaking to fund relief for East Pakistani refugees displaced by genocide – Bob James embarked on a journey fusing music and social concerns that is now more than 30 years long.

Since 2016, the regional music scene veteran has been running Buffalo Blues for Veterans, a series of events raising money for military veterans and their families in urgent need. The Covid-19 pandemic has exacerbated the many problems veterans face, while simultaneously shutting down the live concerts that James has been presenting for their benefit. So the Buffalo Blues for Veterans Sunday Concert Series took to the ether, presenting local artists performing remotely via Facebook Live, and raising money to purchase gift cards covering grocery expenses for struggling veterans.

As the series entered its fifth week, I caught up with James for an insider’s view of the issues facing Western New York veterans and their families.

Question: Give me some background on the situation with military veterans in Western New York and how you became involved in working to help them.

Answer: In 2016, friends of mine asked me to produce a CD for a homeless shelter and said they would raise funds for its production. When the album was nearly complete, my friends bailed, saying they were not able to raise funds. Having done so much work already, I spent the small inheritance from my recently departed parents’ estate, paid the costs for the CD, and decided to make it a benefit for homeless veterans.

The first donation from the opening concerts in 2016 was more than $4,000. At that point the project, envisioned as one CD and a few supporting gigs, really took off and became an ongoing campaign, now heading in season 5. We’ve raised and donated over $63,000 to a range of Western New York veterans’ charities and I’ve learned a lot about each one’s leadership, strengths and needs.

Q: Has the pandemic made the situation for urgent need vets even more dire?

A: My research suggests that the transition from military to civilian life is the issue that affects most vets. Some do well in transition, some don’t, and when psychological issues, like post-traumatic stress disorder, depression, medical problems come into play, then emotional, financial, legal family employment, educational and more tasks of daily living become harder to navigate.

Our region is rich with organizations serving veterans, but they are fragmented. When a soldier is discharged from the military, there is no organized system to connect them with the range of local services. Several veterans have said to me, "It’s like you get your papers and get dropped off at the bus station or the airport, see you later, thank you for your service, and that’s it." They get home, make a phone call to get help, are given two phone numbers that lead to four more, and it’s so confusing, many of them stop trying.

Veterans with PTSD and depression engage in social isolation in normal times, balanced by some social activity with other veterans who understand what they’re going through. The pandemic eliminates their capacity to get together their military brothers and sisters. 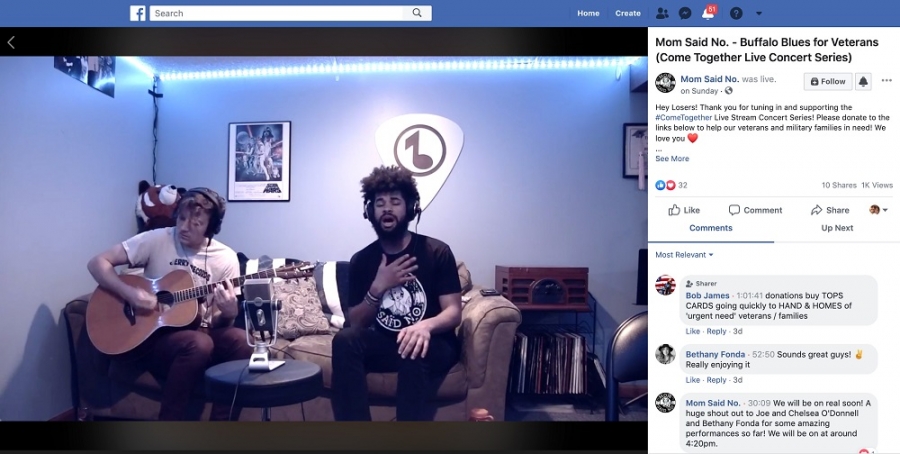 Elliott Hunt and Tim Jackson of Mom Said No performing as part of the Buffalo Blues for Veterans Sunday Series.

Q: Tell me about the response from the public to the Sunday concert series.

A: The analytics tell us that 3% of viewers donate, and most just watch and text their appreciation for the performers. I’ve networked to get matching funds or checks mailed to our nonprofit, Power of Song. As of week number four, we’ve raised is $3,201, an average of $800.25 per week.

Q: How are you handling the performances? Is everyone performing solo, from home?

A: Everyone plays solo, unless they have a live-in bandmate. We’ve explored platforms for musicians to play together online, but those are only available with very fast internet connections and special gear, using headphones, interfaces, etc.

Q: What about the response from the local music community – both musicians and club owners?

A: Since 2016, Buffalo Blues has built a directory of over 200 musicians, clubs, engineers, small-business sponsors and others who have given of their time and talent to make this all happen. Everyone who has played over the first four weeks wants to play again. Our story was built on musicians wanting an audience and also wanting to serve a higher cause. Music can do more than entertain and inspire. It can serve as an engine to make the community a better place.

Q: How long do you plan to continue the series?

A: Buffalo Blues was intended to be one CD and just a few concerts, but we’ve held over 35 events and are just about to release a third CD.  So, it’s hard to say. Even when we return to live events – who knows when – a Sunday evening Facebook series might still work.

More information on the Buffalo Blues for Veterans series can be found through buffaloblues.org.