Gov. Andrew Cuomo's announcement to keep schools closed through the end of the school year due to the Covid-19 pandemic was emotional for teachers who haven't seen their students since mid-March, even if it was expected.

“It’s just sad. We’re more than teachers to our students. Our students are family. We miss them. They miss us – they need us,” said Trisha Rosokoff, a first-grade teacher in Buffalo.

But Friday's formal decision from the governor now allows everyone to move forward.

Students and parents can stop wondering if they'll be back this year.

Teachers can focus attention on remote instruction that will carry on for at least the next couple months.

And administrators can devise plans on how to reopen safely – a critical piece to reopening the entire state economy.

Those plans may include requiring staff and students to wear masks and have their temperatures taken before they enter schools, and even bigger changes.

"Given the circumstances that we’re in, the precautions that would have to be put in place to come up with a plan to reopen schools with all those new protocols – how you would operate a school that’s socially distanced, with masks, without gatherings, with public transportation system that has a lower number of students on it?" Cuomo said during his Friday briefing.

"How would you get that plan up and running?" Cuomo said. "We don’t think that’s possible to do that in a way that would keep our children, our students and educators safe. So we’re going to have the schools remain closed for the rest of the year."

The decision affects 2.59 million students in 700 public school districts, as well as students in 1,800 private schools and 189 public and private colleges.

Cuomo's announcement ended more than six weeks of speculation about the future of the school year.

"We talked to a lot of parents and the consensus really is there just isn’t the time between now and the end of June to safely open schools," said Wendy Mistretta, a Buffalo mother and president of the District Parent Coordinating Council, a parent group.

"Very relieved" is how parent Rachel Dominguez described her reaction to the governor's decision.

Yes, parents are stressed with home instruction and distressed about the memories and milestones their kids are missing in school, but they're most concerned about their child's safety, said Dominguez, a Buffalo mother who co-chairs a parent-teacher group.

"We have been expecting for a long time that schools will probably remain closed, but it's a relief to know safety of kids is paramount," Dominguez said.

“I think the governor made the right decision to put health and safety first," said Cantafio, a social studies teacher at West Seneca West High School.

"But it's heartbreaking and I miss the students," said Cantafio, who is also the president of the teachers union in West Seneca. "I'm sure all teachers feel this way." 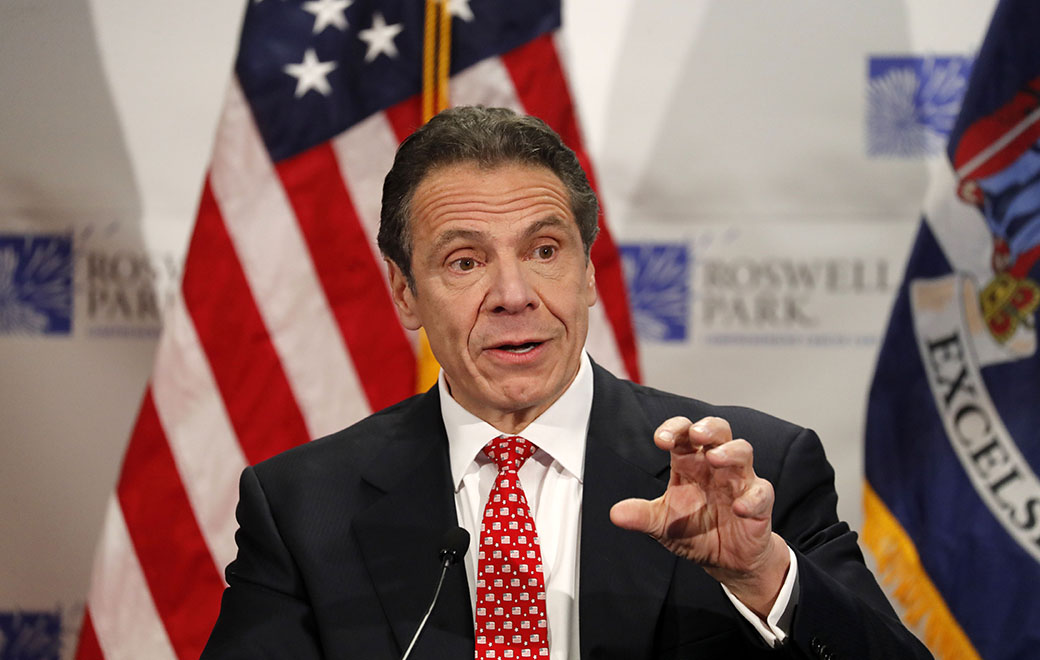 Gov. Andrew Cuomo said Friday that it would be impossible for administrators to devise plans to safely reopen schools for students within a few weeks. (Mark Mulville/News file photo)

The governor ordered all schools in the state closed March 18, although school superintendents in Erie County had closed their schools March 16. Since then, teachers have been trying to educate students through a wide variety of online and distance-learning efforts, with students working on lessons at home.

"Teachers did a phenomenal job stepping up to do this," Cuomo said.

The governor had previously extended the closing several times, most recently to May 15.

But shutting down schools for the remainder of the year seemed inevitable with Covid-19 cancellations all around.

The state suspended the third grade through eighth grade state assessments for this year, and it later canceled the June Regents exams, telling students that as long as they passed their Regents courses this year they would be exempt from the exams and still earn credit. On Thursday, the state Education Department announced the cancellation of the Regents exams for August.

"I respect the fact that he did what he said what he was going to do which is make a fact-based decision," said Michael Cornell, superintendent of the Hamburg Central School District, "and based on the facts he had in front of him he believes it would be unsafe to open schools at any point during the course of the current school year."

Buffalo Public Schools Superintendent Kriner Cash, who has been vocal about his concerns over reopening too quickly, applauded the governor's decision.

“The decision is the correct one," Cash said, "and we will continue to monitor the issue as this health crisis unfolds because I believe we are only in the first part of it.”

Cuomo said keeping schools closed through June does not prevent the state from allowing some businesses to reopen in some regions of the state. He said he would announce by May 15 if he will extend the statewide PAUSE order that closed businesses and restricted public gatherings.

But the governor acknowledged that if schools cannot safely reopen in September then the state might not be ready for a full reopening of businesses then, either.

Cuomo said last week he would not open a school unless it had a protocol to disinfect the schools and a protocol on social distancing and "protective personal behavior" in schools.

He also said last week it would be possible to open schools in one region of the state and not another, and that the opening of businesses and schools is connected.

But Friday, Cuomo said that no schools could open before the next school year because it is unrealistic to expect administrators to develop within a few weeks a plan for reopening and having students remain at a safe distance from each other.

"It's one thing to say you can figure out how to social distance in construction or at a manufacturing facility with adults," the governor said, explaining why the state may permit some businesses to reopen in parts of the state but not allow schools to do that.

“How do you tell a 10-year-old to social distance?” Cuomo said.

The task ahead is a big one for schools, Cash agreed.

Antibody testing will need to be done to reopen, he said. Personal protective equipment will be needed for students and staff. Those entering the building would need their temperature taken.

And Cash doubted class sizes in Buffalo could be reduced to help with social distancing because the cost would be enormous for a district already facing a severe budget crunch due to the financial fallout from Covid-19.

In fact, superintendents were waiting for the governor's word Friday not only so they could plan for the reopening, but also so they could gauge the effect on their budgets.

Cash, for example, has said if schools remain closed the rest of the school year, the district could save “$30 to $40 million” to be rolled over for next year.

"If we get all of that coordinated and aligned together, I'm confident we'll be ready to open, certainly in the fall," Cash said. "But I also anticipate doing some summer programming for students who need it and we are clarifying that plan right now."

Cuomo said a decision on summer school programming will be announced by the end of May.

As for the next school year beginning in September, Cuomo said there has been no decision.