Travis Yost has been involved in the world of hockey analytics for a decade and is part of TSN's Hockey Analytics team. Before joining TSN, Yost was a contributor at the Ottawa Citizen, the Sporting News and NHL Numbers, and he has been a consultant for an NHL franchise. He will be contributing breakdowns on the Buffalo Sabres for The Buffalo News. Follow Yost on Twitter: @travisyost.

There is, understandably, substantial focus within the National Hockey League right now about finding ways to finish the 2019-20 season. The return to normalcy is one driving component; so, too, are massive revenues not yet realized by a league that doesn’t exactly carry the same financial health as its North American competitors.

We don’t know what the framework of a return might look like, but we do know that the coronavirus outbreak will fundamentally challenge the NHL. Financially, the ramifications will be significant – it seems all but guaranteed there will be a flat salary cap next season at a minimum, and depending on how little hockey is played prior to the 2020-21 season (which may also be impacted), that number could drop further.

It’s a critical point for front offices to consider as they head into uncharted waters. Teams with little salary cap space already are going to have to cut ties with players they might have considered part of their long-term plan a year ago; cash-poor teams that might be disproportionately hurt by the financial losses of the last couple of months might have to get creative in finding ways to reach the cap floor. There will be a whirlwind of player movement, and this all precedes next year’s expansion draft.

For the Sabres, it’s another pivotal offseason – if not for the fact that they have a number of important restricted free agents to extend, then because they only project 23 standard player contracts for next season. The team is going to need to be active in free agency and in the trade market, which isn’t necessarily a bad thing.

It does make me wonder what type of opportunity Buffalo might be able to find here.

Consider the Tampa Bay Lightning, for example. They are projecting north of $76 million in salaries for next season, with only three defensemen rostered. They also have two big restricted free agents in forward Anthony Cirelli and defenseman Mikhail Sergachev.

Cirelli’s started to garner attention thanks to this year’s scoring outburst, but since entering the league he’s been a wildly effective two-way forward, the exact type of forward a team like Buffalo (or most others for that matter) needs. If you believe defensive contributions are undervalued, then you understand why Cirelli is such a desirable trade or offer sheet target. Over the last two seasons, he is just seventh in team scoring and yet ranks second in Goals Above Replacement on a per-60 minute basis. Here’s what Tampa Bay looks like from 2018-20 for reference: 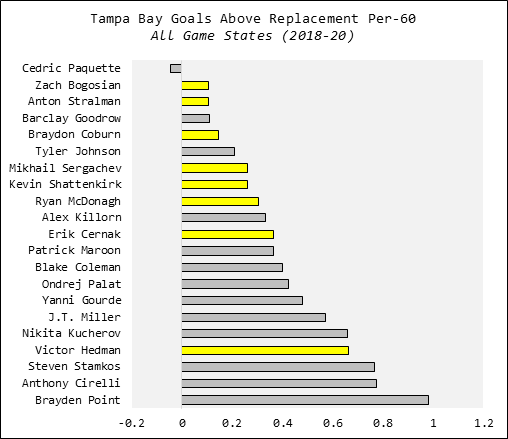 One of the important things to consider with a player like Cirelli – most players, I would argue – is that contributions to team performance go beyond scoring rates and plus-minus measures. Skaters play with different teammates and against different caliber of competition, and get different degrees of performance from their respective goaltenders. We also know there are other measures – like how well a player draws penalties, or how frequently a player takes a penalty – that are real, quantifiable, and can impact a team’s position in the standings.

I mentioned Cirelli’s scoring earlier as one of the reasons why he’s developed a reputation as a player on the rise, but it is critical to emphasize how strong of a defensive player he is. The last two seasons have seen Tampa Bay outscore its opposition 93-54 (plus-39) with Cirelli on the ice, and that impressive differential is largely from the defensive end. The Lightning only give up 1.7 goals per 60 minutes with him on the ice, and 1.9 expected – both around the 93rd percentile leaguewide and at the top of the team leaderboard.

He is, like other elite defensive forwards around the league, a master at working within his five-man unit to push shooters outside of the dangerous areas. Just look at how the shots fall in the offensive and defensive zones when he is on the ice (this from 2019-20 via HockeyViz): 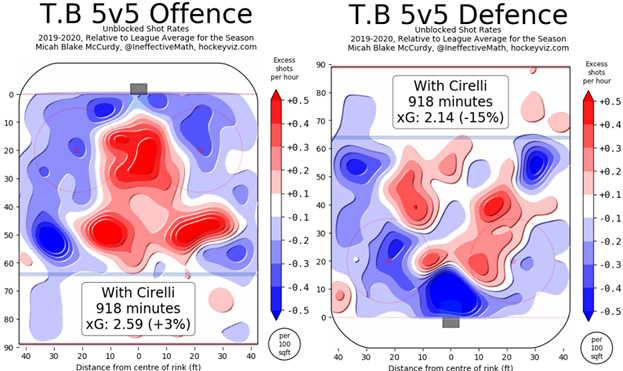 Perhaps the most intriguing part of Cirelli, at least from Buffalo’s standpoint, is the massive need for a second-line center in Buffalo – a player who can run his own line away from Jack Eichel with a high degree of competency. Johan Larsson, Marcus Johansson, Curtis Lazar, Casey Mittelstadt and Evan Rodrigues combined were just five goals better than what we would expect from replacement players this season. Cirelli alone was worth 16 goals this season, sandwiched between Brayden Point, Steven Stamkos and Yanni Gourde.

Make no mistake, Tampa Bay knows well how impactful a player Cirelli is. But as teams better understand player contributions and the value a skater can create for a team, so too do the players and their representatives. The Lightning will do what they can to keep Cirelli as part of the team’s core going forward. But with an unprecedented cap crunch looming and teams with cap space in desperate need of more talent, you start to connect the dots.

Cirelli’s asking price will be as big as his next contract, but in this league, you get what you pay for.