We don't know what our days at the ballpark will look like when we can finally go back, but you can imagine a few things.

Social distancing probably means no jammed crowds and empty rows between fans lots of nights. Ingress and egress might mean security officials being forced to allow only a few people to enter and exit at a time. Temperature checks might be common once you get through the metal detector.

And how in the world will concession stands work? Can we really line up and get food handed to us? Can we really sit in the stands, call over our favorite beer vendor, hand him a few bucks and have him hand over a drink and a cup? You'd hope so, but what a messy time we live in.

You know who has been pondering these points? The Conehead.

"Absolutely, I've thought of it. All of it. A lot," said Tom Girot, the ubiquitous Sahlen Field beer vendor who has spent more than 40 years wearing his cone while becoming a key part of the city's baseball fabric. "We're in the middle of a pandemic and things are going to be more careful. I worry about what's going to happen at times. Now you have to think more about the whole credit card issue. It's been a coming thing in society anyway."

Specifically, Girot and his fellow vendors have never taken cards but they probably will have to start. Younger fans simply don't carry much cash anymore. And people are going to be worried that bills and especially coins might be laden with the coronavirus.

"Not taking cards has cost us sales, but I really didn't care because I have enough regular customers," Girot said. "But now I find myself paying at places with a credit card because I don't want to jeopardize the person taking care of me, make them feel uncomfortable.

"You wonder what that will do with a vendor's timing. A guys calls me over or comes up to me and wants one beer, is it going to be a three-minute process? That's huge. When I'm vending, time is important. I talk to other vendors and they say we should take cards and I might say to them we're only losing 20 percent and saving the time. But now after this, that 20 percent is something and everything is going to be different. I just don't know what to think." 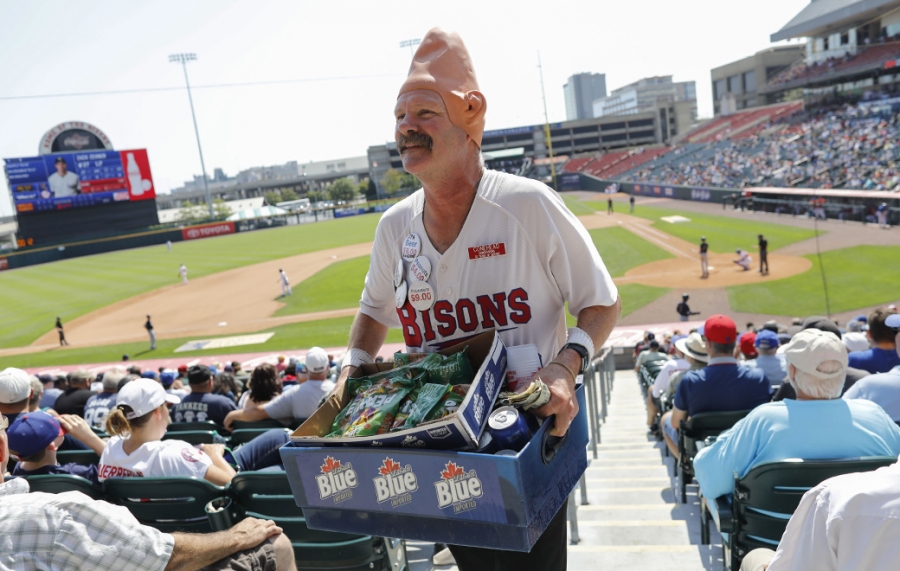 Girot, who is 65 and manages 13 rental properties in Buffalo, is like the rest of us. He's had plenty of time to sit home and think about a lot of things lately.

"I make a lot of calls, call a lot of friends to see how they're doing," he said. "For me, it's not social distancing. It's 'social withdrawal.' That's the good term for it. The only places my wife and I go are Home Depot or Dash's. And at Dash's, you're not really talking to each other because everybody is pretty much afraid of each other right now."

No one at the ballpark – or outside Section 101 of KeyBank Center at Sabres games – is more sociable than Girot, who wears the uniform number 79 at Bisons games to signify the year he first started handing out suds at War Memorial Stadium. So this situation is particularly hard on him.

"It's what I enjoy doing most of anything I do in my life. I tell people that all the time," he said. "I don't work for money anymore. I work for enjoyment. I'm a people person and I just love talking to people and that's why this is so hard. I love the April games even though there's not many people there a lot of the time. I don't make any money but I love talking to people. I can talk to everybody in a night. I have a ball."

Girot started vending as a teenager, hawking peanuts at Braves games in Memorial Auditorium in 1972. A few years later, he became Conehead as a tribute to the recurring '70s sketch on "Saturday Night Live." He has been the subject of bobbleheads in Buffalo and Rochester, where he's been serving since 1988, and the Red Wings' version even voices his famous "Conehead Guarantee," where he reminds every customer: "Get a warm beer from me, you drink it for free."

“Conehead is a tremendous ambassador of Bisons baseball and of the fun and friendly ballpark experience we hope to provide our fans each and every time they come to Sahlen Field,"  said Mike Buczkowski, the president of Rich Baseball Operations. "The 'Conehead Guarantee' that he coined himself is emblematic of an ideal we hold dear ... to provide our fans with championship service and value.”

For his 40th anniversary two years ago, the Bisons unveiled a beer in his honor dubbed "Conehead IPA" and held a Conehead Appreciation Day. When the Bisons did their "Opening Day at Home" promotion on social media April 17 to honor their pandemic-postponed home opener, a video salute from Girot was included in the presentation.

Girot has no plans to slow down, but the coronavirus does give him pause to ponder his health. He had a stroke about five years ago and he survived a bout of prostate cancer that he was declared free of last August.

"Nobody knows if we're going to have a vaccine, whether there will be some kind of medicine, so I've been doing a lot of research on it," Girot said. "The thing I found out is I'm O-positive blood and it affects O-positive the least of any blood type. I've got a great immune system.

"I don't get the flu, don't get stomach issues. I get serious things. Strokes and cancer. I don't monkey with the little stuff. Who knows really? We are in such an unknown thing. My generation has had it easy. This is our World War II. You don't know, no idea what's going to happen. I don't know who to believe and what to believe."

Girot does believe the baseball gods were smiling on him in August. He was scheduled to work at Frontier Field in Rochester for a Bisons-Red Wings game after a 3 p.m. appointment with his oncologist. After a few dozen treatments that included two months of radiation, Girot was thrilled to hear he was in the clear and his car tires probably never touched the pavement as he sped east down the Thruway.

The date was Aug. 20. What happened that night? T.J. Zeuch pitched a no-hitter for the Bisons, just the second in the team's 35 seasons of its modern era. 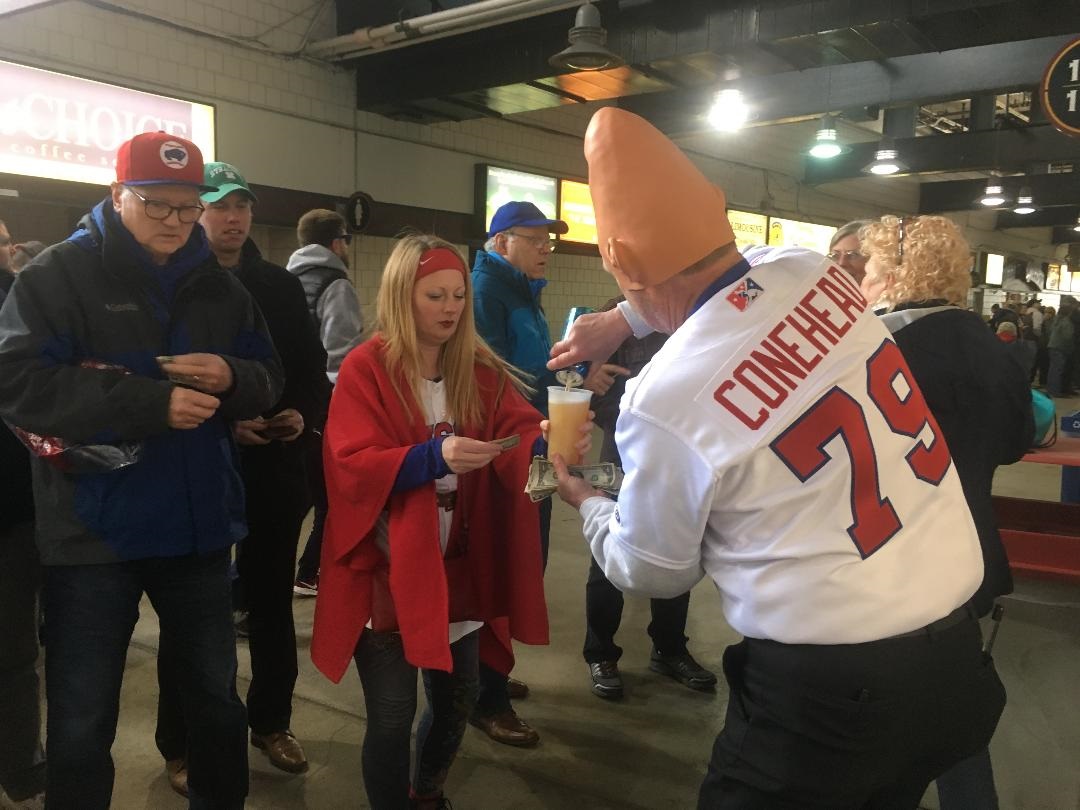 Tom "Conehead" Girot serves beer at the Buffalo Bisons opener two years ago. He was at the first game 40 years prior when the Bisons returned to Buffalo, which explains his jersey number. (Sean Kirst/Buffalo News)

"Is that incredible? What a day in my life," he said. "Find out I'm cured of cancer, they tell you you're cancer-free and that happens in the game. People go to baseball games for fun. It's not live and die like the Sabres. The Rochester fans, God bless them, when (Bisons center fielder) Jonathan Davis made his incredible catch for the second out in the ninth inning, they gave him a standing ovation. After the last out, too. That was just great. I have so much respect for the fans there. What a day in my life."

Girot wants more of them. We all do. He hopes the minor leagues can find a way to have a shortened season, even one that stretches deeper into September when the weather is still good. The fan-friendly price of tickets might make Bisons games more of an option for people, but it's a tricky proposition.

The trend in stadiums, especially in the minors, has been for gathering spaces for fans rather than everyone in a seat around the diamond. Outfield grass seating is popular. So are standing-room drink rails and party areas. In the era of social distancing, there doesn't seem to be a way you can use places like the right-field party deck or the first-base restaurant patio at Sahlen Field. So many worries that fans and teams never had before.

"I worry about a lot of things," Girot said. "I want to get back to the ballpark so bad. I really worry about hockey. Sabres fans are so upset right now. How many of those people with season tickets own things like restaurants and bars? They're not going to have disposable income. You get that bill in the mail for two seats, what are you going to do?

"One thing I'm not worried about is the NFL, even if they play in empty stadiums. The only thing that breaks my heart is I think the Bills are going to be really, really, really good next season. I mean really good. And you might not be able to go see them play. The year they might finally win and maybe you can't go to the games. That's Buffalo luck right there."