Maybe someday Stefon Diggs will win a Super Bowl ring for the Buffalo Bills. Should that ever come to pass — on a pass, perchance, from Josh Allen — let’s hope Diggs has better luck keeping it in his possession than the one pictured above.

This is a championship ring that Diggs won for Our Lady of Good Counsel High School in Olney, Md., in 2010. Patti Engel found it five years ago while walking her dog. She’s a speech pathologist for public schools in Montgomery County in the Maryland suburbs of Washington.

“I saw something shiny in the grass,” Engel says. “So I bent down and picked it up and I said to myself, ‘Wow. This is somebody’s something.’ ”

The name on the side of the ring said: “S. Diggs.”

So Engel showed it to her son-in-law, Matt Beach, who happens to be a graduate of the University of Maryland.

Diggs played at Maryland and had recently been drafted by the Minnesota Vikings. WUSA9, the CBS affiliate in Washington, contacted Diggs at a rookie minicamp in Minnesota and he confirmed the ring was his. The station said at the time that it would try to arrange a “ring reunion.” It never happened.

“I reached out,” Engel says. “Life happens. Stuff happens. His people never got in touch with my people.” 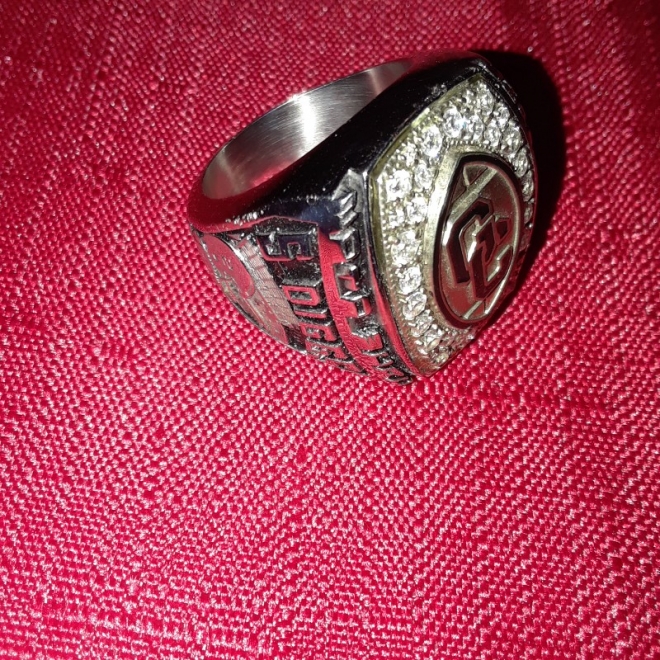 So Engel still has the ring. She shared photos of it with The Buffalo News this week.

Diggs told the St. Paul Pioneer Press at the time that he didn’t even know it was lost.

“I guess it had been gone for a while,” he said then, “and somebody just came across it. I’m lucky to get it back.”

Only Diggs never did get it back. He has other rings: Good Counsel won Washington Catholic Athletic Conference football championships in his sophomore year in 2009, his junior year in 2010 — that’s the ring in question — and in his senior year in 2011. Diggs rarely left the field for Good Counsel, playing on offense, defense and special teams.

Aaron Brady, former football coach of Gonzaga College High School, in Washington, once told The Washington Post that preparing for Diggs was “impossible, to be honest.” The WCAC is annually among the nation’s best high school athletic conferences for football and boys basketball.

Diggs was a five-star recruit at Good Counsel with offers from 32 Division I programs, including Alabama, Clemson and Ohio State. Still, he chose Maryland in his own backyard. Diggs had a spectacular freshman year there but broke his leg in his sophomore year and missed some games with a lacerated kidney as a junior. He passed up his senior year to enter the NFL draft and the Vikings selected him in the fifth round.

Not long after that, Engel found the ring while walking Tiger, her cairn terrier. She says he looked like Toto from "The Wizard of Oz."

“I was just minding my own business,” Engel says. “How the ring ended up in Germantown (Md.) at the side of the road, I have no idea.”

Diggs has an idea. Here’s what he told the Pioneer Press in 2015:

“I give all my rings to my mom. I’m not big on trophies and things like that. I give them all to her. She was taking them from my grandmother’s house because my grandfather had passed away. I guess it slipped out of my mom’s bag.

“I texted my mom and said somebody found it and she said, ‘I’m so sorry.’ I said, ‘Don’t even worry about it. They’re going to help me get it back.’ ”

That could still happen. Engel says she’s happy to return the ring at any time, though she wouldn’t mind a little swag in return. And she’ll watch the Bills with interest this season now that Diggs is their top receiver.

“Oh yeah, I’ll keep an eye on him," she said. "When he played for the Vikings, I had him on my fantasy team. One season I came in second and won some money.”

Engel is a New York Giants fan who is originally from Peekskill, the mid-1960s summer home of the New York Jets. She doesn’t root for the Bills, but she does have a Western New York connection: Engel earned her master's degree in speech pathology from SUNY Geneseo.

Tiger died a year after the ring discovery. Engel has a new dog, a rescue named Joey, who’s a miniature pinscher-Chihuahua mix, with maybe a bit of Jack Russell.

“Joey hasn’t found anything of value yet,” she says. “But that’s OK. We’ll keep looking.”

Just as Bills fans will keep looking for that elusive Super Bowl championship. Who knows? Maybe Diggs is the missing link. (He sure is missing that link from 2010.)

“Yeah, well, everybody hopes they win a Super Bowl ring,” Engel says, laughing. “I just hope we have a football season.”